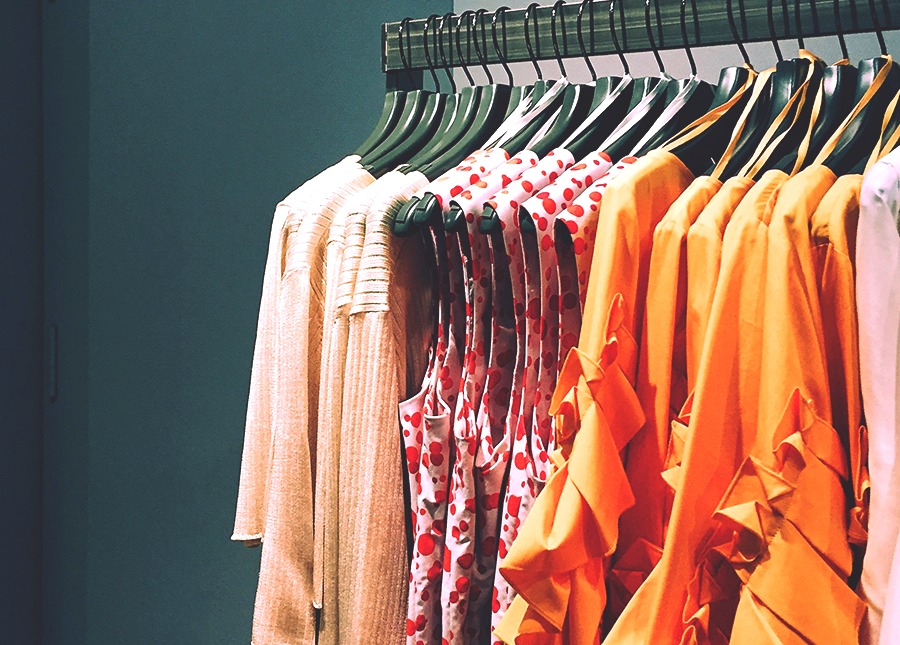 This time last year, I made a New Years’ Resolution that I’m both proud and shocked to say I kept all year. I’d set a pretty good precedent the previous year with my resolution to bake every week, so I guess I can say that I actually keep my resolutions now? Anyway, this year, I took a vow of abstinence from shopping. I decided that I was not going to buy any new clothes all year: charity shops and the occasional foray into the depths of eBay would be my only wardrobe source.

This was a big ask for me. I love clothes. I’d say I have a pretty strong, quirky sense of fashion: I own precisely one pair of jeans and dress almost exclusively in fancy skirts and dresses. Shopping — in town, never online — has been one of my greatest pleasures in life for years. But it was costing me a lot of money (which was going to super unethical businesses), it was damaging the environment, and my wardrobe still seemed to be full of stuff I hated. So I decided to go on a cleanse. From now on, my entire shopping budget would be going to charity, and I would be contributing to a more circular economy.

So, here’s a little breakdown of my year:

I actually only came up with this resolution a week or two into January. I’d just heeded the Vimes Boots Law and invested in a good pair of new boots, and my last pre-Resolution purchase was a dress that ended up being a valuable staple in my wardrobe. Then the purge got well and truly underway.

I was now back at college in a city with a huge shopping center literally five minutes from my house, and almost nothing else to do. I was glad to have some new charity shops to explore, but I was still in a very pro-shopping mindset, so I was really feeling the sting of my new rule. I discovered how it was affecting my social life; going shopping with friends became excruciating, as I was dragged from shop to shop seeing piece after piece I couldn’t buy.

A much easier month, considering we had a bunch of snow and freezing weather. I’ve never been much of an online shopper, so keeping me holed up at home effectively removes any temptation to shop. Besides, I was wearing the same coat and boots the whole time.

I went home for Easter and visited Glastonbury, a town notorious for its quirky inhabitants. The charity shops here were a goldmine of epic proportions, and this was where I found not one but two possible options for my end-of-term ball outfit. I ended up buying both and settling on one later.

Another difficult month: lots of time out in town plus new-season clothes equals shopping envy. But, I was noticing that the urge to buy from high-street shops was going away as I got more used to the new normal. Equally, however, I’d exhausted the small selection of charity shops in my city. So, I recreated the experience of a new summer wardrobe by unpacking my summer clothes I’d put into storage last year! I discovered hardly-worn pieces I suddenly loved now despite hating them before, as well as old favorites I’d forgotten about.

This was also the month of my end-of-year ball, for which I’d found a beautiful corseted skirt. I had to be a bit cheeky and buy a new bralette to go with, because my original option had got super ratty, but because it was technically an underwear item, I forgave myself — underwear was my exception to my rule, naturally. Plus, I looked great.

Coming home again from college, I decided to join my local gym for the first time, and I was surprised to discover that I love going to the gym. At first, I was working out in just old pairs of leggings, t-shirts and a ratty sports bra, but I soon realized I’d need some more gym clothes. I bought a new sports bra and then found two pairs of leggings on eBay, having a surprising lack of luck in the charity shops. Otherwise, I stuck to the old leggings and t-shirts; I feel like “specialized” workout clothes are a bit of a scam for the casual exerciser. In other news, my mission to find new summer shoes was failing, and I no longer owned a single pair without gaping-crocodile-mouth soles, so I decided to make shoes another exception to my rule and stocked up from new.

The heatwave has now set in good and proper, and I was working in a tiny, scalding-hot cafe. A lot of my hot-weather clothes were kind of revealing — short skirts, crop tops etc. — so I went on a mission to find myself modest, practical and work-appropriate dresses. And it was easy! The dresses didn’t even need to be that pretty or well-fitted, especially as I’d be wearing an apron and probably ruining them with sweat and spilled coffee. I found one particular dress (technically a maternity dress, but it was very comfy for my IBS bloat) to which I think I owe my life. Without it, I would certainly have died of heat stroke.

This was the month when I realized that all my clothes looked like they belonged to a 16-year-old. And most of them had; I still owned many clothes from my teenage years. With new clothes off-limits, I was paying more attention to my current wardrobe, and putting a lot more thought into my purchases. So, I did a brutal wardrobe purge and donated over half of my clothes. I kept a few items I didn’t love, though, because if I didn’t, I’d have nothing to wear, and I couldn’t replace them yet. At this moment, I realized that come the new year, I would have to do a big wardrobe re-do — getting rid of more stuff, buying more sensible stuff, and generally creating a real, grown-up curated wardrobe instead of just impulse-shopping.

A surprising development occurred this month. I had a hospital appointment I was anxious about, and I asked my friends to suggest ways I could reward myself after I went (that weren’t food, because a giant cake isn’t a good thing to look forward to when you’re nauseous with nerves). Everyone’s suggestions were good, but my best friend proved how well she knew me by suggesting I allow myself one exception to my no-new-clothes vow. But, when I went into town right after my appointment — and again, and again, for three days afterwards — I couldn’t do it! The gravity of the decision, combined with my newfound prudence, stopped me from being able to just grab something I sort-of liked for a cheap thrill like past-me would have don.

Since the wardrobe purge — which had left my winter wardrobe, in particular, looking pretty bare — I was starting to feel the sting of not being able to shop again. Equally, though, I was also seeing the amount of extra money I was finding in my bank account. The necessary delay to shopping resulted in months of meticulous planning and Pinterest-ing; now, when the year ended and I could shop again, I wouldn’t be frantically grabbing anything I could. I would know exactly what I was looking for, what I needed, and I would find it. In the meantime, I hit eBay and some charity shops and picked up some new skirts and tops to get me through winter.

New capsule wardrobe planned, I now started doing my research on ethical stores. Just the idea of buying from a regular store made me feel guilty after a whole year of avoiding them, so I was brushing up on my awareness, ready to make better choices when I went back into the world of shopping. Sticking to dirt-cheap, second-hand, donated clothes forever was probably a less sensible and more wasteful idea than investing in some good-quality, ethical stuff brand new.

This month I bought a huge proportion — almost all, in fact — of my Christmas presents either second-hand or from local businesses. The habit of cutting down and being ethical in my shopping had spread to all areas of my life, and I felt a new burst of motivation — it was the final stretch, and soon I’d start creating an ethical, curated wardrobe I really loved!

I write this on New Year’s Eve (at 9 PM, that’s where my social life is currently), so I’m finally able to say I’ve made it a whole year without buying any new clothes! I’m so proud, I’ve saved a lot of money, and I’m especially thankful for the lasting effects this year has had on my shopping habits. I’m much more aware of the ethics of clothes shopping, I’ve broken my fast fashion addiction, and I’ve learned what I actually want in my wardrobe. I wouldn’t recommend secondhand shopping as a lifetime resolution — not if, like me, you’re very particular about your clothes and don’t necessarily like the same kind of stuff as most people — but as a year-long purge, it works wonders. I encourage anyone to give it a try if you’re wanting to reduce your carbon footprint or become a more ethical consumer!

Elise Collins is a creative writing student in the UK and wrote this article ill in bed — more tips on green living, fashion, and also baking can be found on her blog, elisedoeslife.com.