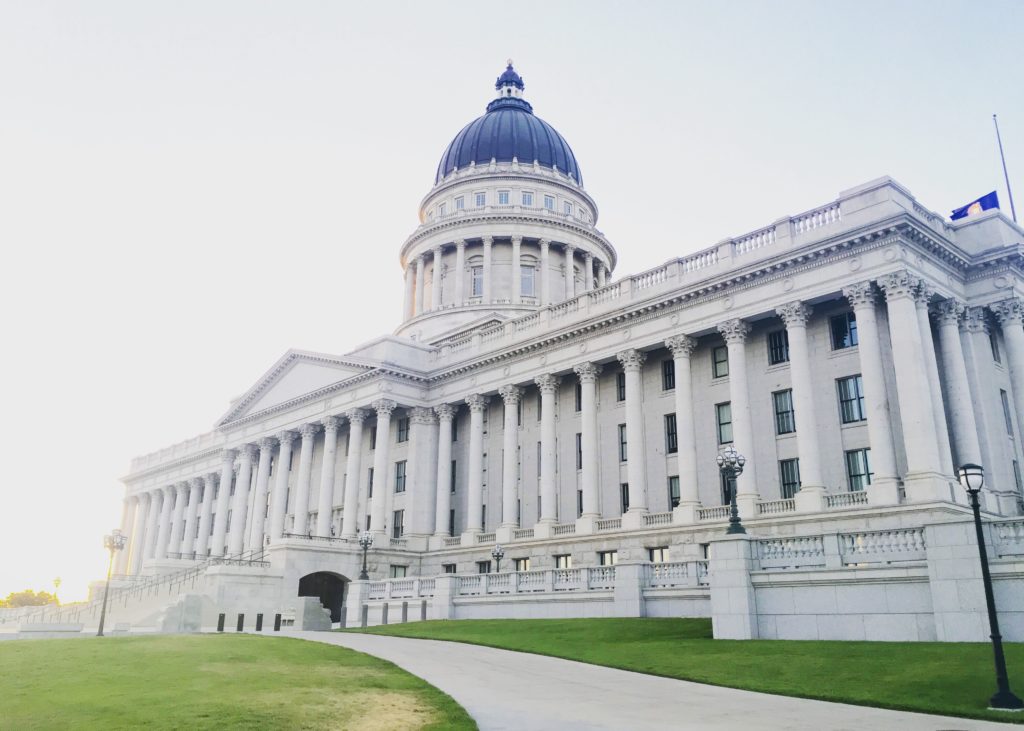 I want to preface this with that I am no immigration expert, and that I can only speak to my family’s experience of immigration costs to come to the United States. I am sharing this information only to shed light on what it took for us personally to get to where we are now.

Regardless of your personal views on legal and illegal immigration, I think we can agree that the actual process of immigration is lost on most people. While native-born Americans can blissfully go about their day not ever having to worry about the day they have to “go back to where they came from,” many immigrants throughout the country obsessively count the months and days just so they can keep tabs and plan to avoid the day they become “Out of Status.”

How much does it cost to immigrate to the U.S.?

Our immigration journey begins in 2003 — when we first visited the United States to see some newly immigrated family friends. I can’t speak for what my parents were thinking at the time, but I was 8, so I really just wanted to go to Disneyland to see Mickey and Minnie Mouse. In fact, I believe this statement is on record as what I stated as my “Purpose of Visit” with the immigration officer at LAX upon arrival. This trip did not last longer than 2 weeks, and soon we were on our way home. This trip cost us $480 in visa fees alone — not including transportation and accommodation.

Now before I continue, I want to preempt any judgments. Yes, we come from what is considered a third-world country in Southeast Asia. Contrary to what most will think, our socioeconomic status was respectable there. While we weren’t rich, we were comfortable. Our life was never in danger. In truth, we didn’t need to immigrate here. But my mom got a job offer, so who were we to refuse?

My mom immigrated to the United States for the first time in 2005. All-in-all this cost her about $2,185 in fees, not including transportation costs and lawyer fees. At the time, my mom was being paid way below market rate for her work as an accountant in exchange for employer visa sponsorship. This stint quickly came to an end a short year later, as my mom was informed USCIS had “lost” her work permit application. Her lawyer at the time said her only other option to stay was to marry a U.S. citizen — but my mom isn’t a huge fan of fraud. So she packed up her bags and went back home.

It turns out my mom’s employer really liked her as an employee, so they invited her to come back again in 2007. As I said previously, our life was just fine back home, so my mom was hesitant to come back to the United States. Eventually, her decision to give the U.S. another try was due to the academic and economic opportunity this country presented for me.

You see, where I come from, just attending a reputable university costs a lot of money. While this is also true in the United States, student loans and government grants aren’t as ubiquitous there. Around 2008, the national minimum wage in our home country was a bit over $6.50 per day, and a working professional would only expect to receive about an annual salary of $5,000. Rent also does not come cheap, and neither does food when you’re getting paid a little over $400 a month. Access to quality health care and education are only for those who can afford deposits — yes, even for emergency procedures. In short, socioeconomic mobility is close to none unless you work abroad. As a result, working abroad was and still is such a prevalent practice that personal overseas remittances account for at least 10% of the country’s total GDP.

Her second attempt at immigrating was a success. Shortly after her work permit was approved, she worked with her lawyer to begin processing paperwork to bring me over. A few signatures, a few thousand dollars, one high school entrance exam, and a 14-hour flight later — it was 2010, and I landed in LAX. I was now in the land of the free, reunited with my mom after about 4 years. It cost us $1,550 in fees, not including transportation or lawyer fees.

Fast forward about a year. We’d applied for a change of status so we could get our green card — but it was taking too long. I was 15 years old, only six years away from becoming “Out of Status” and only four years away from attending university. Becoming a permanent resident was crucial for me, as my prospects for attending university relied heavily on whether or not I could obtain sizeable scholarships and grants. We didn’t have the money to pay for international student tuition. So I had to either get my permanent residency before I applied to college, or go back home.

My parents shelled out another $1,230 in applying for residency via a different visa to expedite the process, as recommended by our lawyer. It worked. We applied for permanent residency and received it a few years later in July of 2014 — exactly 5 months before my college application deadlines. I was now eligible for grants and scholarships. I got a full ride to UC Berkeley for an engineering degree, with a few other scholarships on the side to supplement travel to and from Los Angeles, books and supplies. 5 years, 1 degree, and over $700 later, I am now a naturalized US Citizen. My mother is currently going through her naturalization process, with my dad soon to follow. 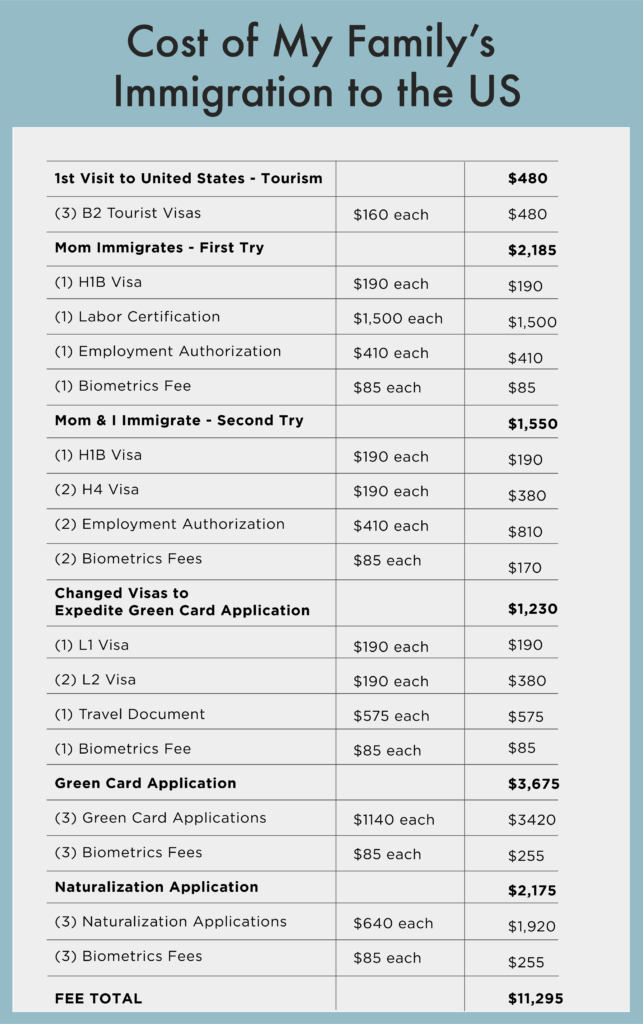 So, how much did it cost in total?

Conservatively assuming a total of about $5,000 in lawyer fees and $16,000 in flights for my family throughout the entire 14 years since we’ve begun this process, on top of the $11,295 in various application and visa fees, we come to a grand total of about $32,295 spent on immigration costs.

I want to point out that my recount only includes the financial sacrifice we’ve made due to our immigration, but more often than not the personal toll is just as severe. Because of this immigration process, I didn’t live with my mom for 4 years. I haven’t lived with my dad since I was 9. My parents lost their parents without getting to see them or hold them for their last breaths. All that while accruing the unspoken yet arguably familiar immigrant guilt of living a better life than their loved ones back home.

I must also note that I am one of the lucky immigrants, who do so immigrate to this country due to want and not for fear of their own safety. My family has achieved the immigrant’s version of the American Dream, and we are better off now than we were before. Throughout my time here, however,  I have met several people who have fled their countries seeking and being denied asylum, people who are escaping from gang, drug and trafficking violence, and people who were simply brought here at a time when they didn’t even know how to count to three. The struggles and complications they face are heart-wrenching and unfathomable to me.

Immigrants often get so much hate and are too often categorized as “the ones stealing American jobs.” But the truth is legal immigration requires employers and prospective immigrants alike to prove to the United States government that the acceptance of the immigrant will not displace “U.S. workers able, willing and qualified to perform the work”. Moreover, illegal immigrants oftentimes take underpaid (like, below-federal-minimum-wage underpaid), labor-intensive jobs with no benefits whatsoever, such as fruit-picking, cleaning, and caregiving — all of which many Americans do not want to take, anyway.

The immigration process is long and expensive. It is both financially and emotionally taxing. It is not my intention to necessarily advocate for immigration reform, because we can argue about that all day. But at the very least I hope this serves as an eye-opener on the immigrant plight in the United States.

Joann is a 20-something, full-time engineer and plant mom, living her best life in Los Angeles, CA.