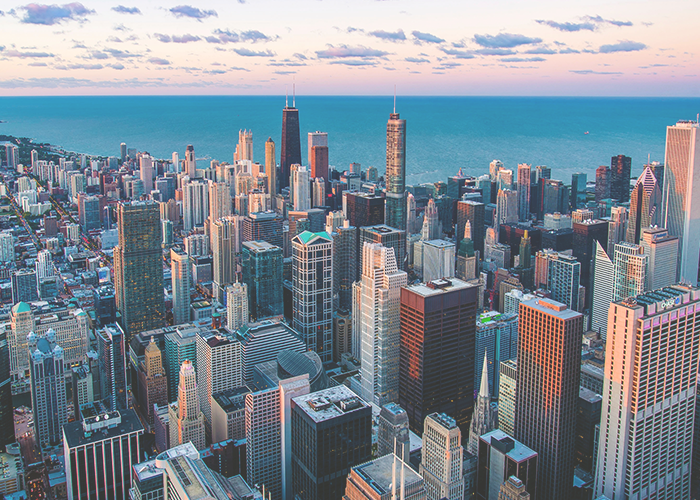 When I was 17, the only thing I wanted to do was move out of my small town. I had a graduating class of a very non-diverse set of <90 students. It took half an hour to drive to a grocery store with the best prices. I spent over an hour on the school bus every morning just getting to school. I was done with the isolation.

At 17, I found an apartment in Chicago (with roommates) on my own. Fortunately for me, I had gotten an incredible job as a wedding album designer for the local photographer, something that allowed me to work and learn, doing something I loved, all while saving money. I saved up for my first camera and the security deposit on my first apartment.

For most of my college life, the only money I earned was through work-study jobs. At my first college for my associates in photography, I worked in facilities; I mopped floors, changed lightbulbs, rearranged classrooms, whatever was needed. For my bachelor’s degree, I got an amazing job in the library — it was probably the best college job I could have had.

Living in Chicago on a budget

Due to the nature of work-study jobs, I was unable to work more than 20 hours a week. At minimum wage with only 20 hours a week, with full-time work and very…unique homework assignments that required a lot of time, I had a lot of difficulty finding a second job. Put simply, every month I made a little under $700 to pay for my living expenses. This was for everything: rent, utilities, phone bill, food, etc. I had to get extremely creative.

To start off, I was specifically looking for an inexpensive apartment that wasn’t in a terrifying neighborhood, and I couldn’t pay more than $400 a month in rent. Yes, you read that right. $366. For anyone in a major US city, you know how bananas that is. (It was.)

I found a three-bedroom apartment on the far, far north-west side of Chicago where I had to take a bus to get to the train to get me to school. It took an hour and a half on average to get to class/work. It was rough, but the entire apartment was only $1,100 a month. It was a nice apartment — the only thing it was lacking in was laundry (I had to go to a laundromat) and, of course, the location. Otherwise, I seriously lucked out.

This was the biggest stress factor for my college experience. In the summer, my roommates liked having the air conditioning on, which could make my bill to be over $120 in one summer. That was a panic, but I always made sure I had at least $85 in my account to cover just the electric bill. If the electric bill was only $20, I’d have more to spend elsewhere. (Hopefully.)

The scariest situation ever was during the 2013 polar vortex. With wind chill, in Chicago it got below -40. In some areas, -64 degrees. (For those that use Celsius, -40 in Fahrenheit and Celsius is the same number.) That year we got a gas bill for our heating that was over $600. I genuinely cried. I called our gas provider to see if there was some sort of mistake. We kept our apartment at 64 degrees in the winter, but I guess going from -30 degrees to 64 is really expensive. I sold a piece of camera equipment to pay for this bill, along with getting a little bit of help from my family. Utilities in total included, gas, electric, and the AT&T bill.

This was my biggest “splurge” category. Prior to moving to Chicago, I had a cell phone, but not a smart phone. Everyone and their mother seemed to have a smart phone, but they were expensive and the data overages were ridiculous. I got my first smart phone when I was in Chicago. I got the free iPhone with Verizon and spent $60 a month.

Here is where, when I look back, it is 100% obvious how my weight got completely out of hand. I ate 100% crap food. I had a $40 a month food budget. Occasionally, my mother would send some money in the form of a gift card to Target (as I could walk to a target from my apartment), or my father would deposit some money into my bank account, but in general, I had about $40 a month for groceries. I ate a lot of $1 Mcdonald’s cheeseburgers. It was an inexpensive way for me to get out of my apartment; I spent a lot of time in my room, as I knew that if I left, I would want to spend money. I ate a lot of peanut butter, and I had a quesadilla maker, so I ate a lot of canned refried beans and tortillas. At one point, I so desperately wanted a dessert, I fried cut-up pieces of tortilla in a pan with oil and covered them in cinnamon sugar. I was really, really broke. Ramen and rice made me sick to my stomach. I also wasn’t great at cooking at the time, and was generally depressed. (I 110% blame my diet on me being depressed, and then being depressed made me not want to cook, so I ate crappier.)

It wasn’t until I realized that I qualified for food stamps that I started eating better. When you make such a small amount and are a full-time student, you will generally qualify for food stamps. I went from a $40 a month budget to an almost $200 a month food budget. Honestly, the minute I got that $400 ($200 for the month going forward, $200 prorated from the prior month), I cried and went to Whole Foods. I got food I hadn’t eaten in a while. I got into eating some better things, and the food stamps genuinely were my saving grace. The $40 went to treating myself to dinner with friends on occasion. Just places like Potbelly and Chipotle — but still a treat compared to a spoonful of peanut butter as a meal.

Doing laundry when you don’t have a washer and dryer in the building is awful. I had plenty of clothes, though, so I only did laundry once a month. Towels were used twice, jeans worn multiple times, but I had plenty of unmentionables, and my mother equipped me with multiple sets of sheets. I had a folding cart that was my “laundry basket.” That would be dragged through the stairs twice a month (once up, once down), and I would go for a walk to the laundromat. It would cost me about $15 to wash and dry absolutely everything I had.

This is where some wiggle room happened. Sometimes bills would be higher, sometimes I had to buy materials for class such as printer paper, filters, etc. Mostly, I put a little bit of money into savings for school break. When you are on break from a school term, you are not allowed to work. (Note: my first work-study job allowed me to work over break, as we were facilities, so I actually made more money, but my library job did not.) I had to anticipate not getting a paycheck between breaks in the middle of the school year. I was able to work full time over the summer, as I lived in an apartment and not a dorm, so rent never stopped, and to keep my job, I had to be a student.

This accounted for my entire budget.

My saving graces were my tax refunds every year, and when I got to a point with my photography where I could do headshots to help add a little extra for replacing clothes, toiletries, cleaning supplies, laundry detergent, etc. There were many times where my bank account was less than $3 the day before my direct deposit hit.

In retrospect, I am still amazed that I pulled this all off. I didn’t destroy my credit, I didn’t go into (more) debt by living on campus vs. living in an apartment, and really, I wouldn’t change a thing.

I learned how to manage my money. I learned what it took to manage my entire lifestyle and what I wanted going forward. I really gained an appreciation for money, and I would do it all again. Living this way was hard — it was extremely hard — and I don’t recommend eating the way I did, but you live and you learn.

Taryn Goodge is a Chicago resident who likes photography, comedy, terrible license plates, and any type of math with a dollar sign in front. She is currently studying for the CPA exams and hopes that the effects of sleep deprivation aren’t permanent. Follow her on Instagram and Twitter.