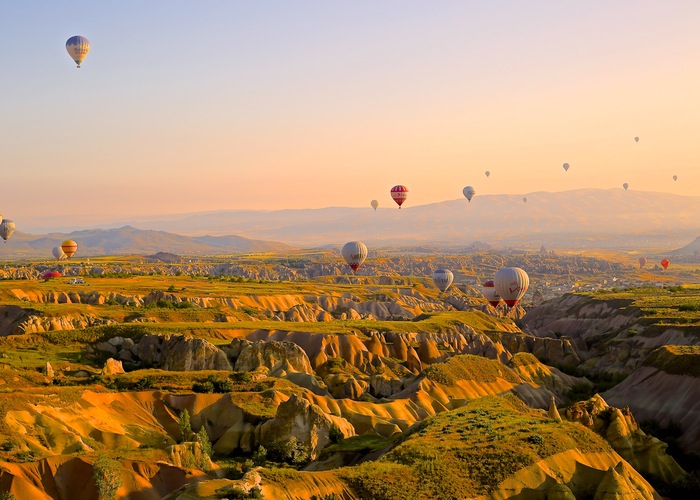 Last week, we featured Paris. This week, our “foreign correspondent” is Meghan Koushik, an American who lived in Turkey for a year. She answered the following 10 questions:

I lived in a small town called Nevsehir, in Turkey for a year. I moved there in September 2013 and stayed for one year. Nevsehir is approximately 450 miles away from Istanbul.

I supported myself by teaching English through the Fulbright English Teaching Assistant (ETA) grant program. I also occasionally supplemented my university classes by giving private English lessons, and taught a free class for refugees at a local refugee support center in town.

Being an English teacher in Turkey is a great option for anyone wanting to live there for an extended period. The government is really trying to expand English fluency in the country, so native English speakers are in HIGH demand and are very well-paid. The Turkish government also provides you with excellent health insurance as long as you’re employed. Probably the biggest plus is that universities can be very flexible. I was able to negotiate a four-day week with my university, so I routinely had three-day weekends to use for travel, as well as a six-week winter break.

I got my job through a Fulbright grant. I’d really encourage anyone hoping to live abroad for a while to look into grant programs like Fulbright— it’s a great way to get a foothold in a foreign country because a lot of your basic moving/living expenses will be covered under the terms of the grant.

Fulbright also covered some of our initial moving expenses, including round-trip airfare and a small excess baggage allowance (around $200). I saved up around $3,000 before I moved through a paid summer internship and jobs over the school year, which really came in handy early on because we were entirely responsible for finding our own housing, and needed to stay in a hotel early on, which ate up a big chunk of our savings. Fulbright could be really irregular about our salary—we didn’t get our first payment until six weeks into the program, and our university never ended up giving us our last month’s payment—so having a cushion to fall back on definitely helped a lot.

Monthly expenses between somewhere like Nevsehir, and cities like Istanbul, are pretty different, which worked in my favor. As a Fulbright grantee, I was paid roughly 2500 TL per month ($850). I split a large three-bedroom apartment with two roommates, and we each paid 200TL a month ($68 by current conversion rates). Heating and utilities maxed out at around 50TL each in the winter, significantly less in the summer months.

I believe friends in Istanbul each paid anywhere between 900-1200TL (1000 TL is about $340) per month to share flats with roommates, so there was a pretty significant difference there.

Groceries in Turkey were pretty inexpensive, and I didn’t eat out too much during the week, but I made it a point to travel really regularly over the weekends, which definitely contributed to food expenses. I largely spent the bulk of my salary on travel—I was able to afford at least 1-2 visits each month to other cities in Turkey, as well as a stint of international travel (and a trip back to the States) over our winter break, and a few weeks of travel in Italy at the end of my time in Turkey. So I definitely scrimped on other expenses to be able to travel as much as I could.

Turkey is a great country to travel in. Not only is there a huge amount of stuff to see (which I wrote about for Buzzfeed), but there’s great transportation, it’s actually affordable, and the people make it incredibly easy.

Getting comfortable with the bus system was a big help. Turkish buses are amazing– they have TVs, Wi-Fi and comfy reclining seats, plus a bus attendant comes around every few hours and gives you free drinks and snacks. Nevsehir was smack in the middle of the country, so it meant that literally any part of the country was an overnight bus ride away.

Flying in Turkey can also be extremely cheap. I could find flights to Istanbul for around 200TL or less, when booked in advance (again, $68). Also, pretty much everyone I encountered was friendly and welcoming, which helped a lot in the small jams I got myself into from time to time. Turkey is an incredibly diverse country and I definitely left feeling like there was still way more to see and do. Traveling also helped me get comfortable with my Turkish language skills, as well as my general comfort level within the country, so I found it to be probably the best way to acclimate.

6. What is the biggest challenge the culture presented? Did you experience “culture shock”?

The town I lived in was definitely on the conservative side, which could be difficult at times—not being able to drink, wear shorts, or go out at night without attracting a lot of unwanted attention was definitely hard to deal with at various points. I also dealt with episodes of sexual harassment and some racism, which often got dismissed by higher-ups at my university as “cultural differences”—that was incredibly frustrating as well. Having a very supportive sitemate and local friends really helped get through some of the rough patches, but it’s sad that things like this can be a reality—as a woman and as a woman of color—no matter where you are in the world.

The worst part was definitely the isolation and loneliness I felt sometimes. Until I got more comfortable with the language and country, there were very lonely times (especially in the beginning) where I really questioned my decision to live in Turkey.

I ended up getting really, really homesick a few weeks into my stay. I definitely underestimated how easy it is to feel lonely when you’re in a new country with a language barrier. This is another place having savings came in handy—I was able to book trips home (way in advance) to see my parents in India, and my boyfriend in the States within weeks of arriving in Turkey. Psychologically, just having a set date when I knew I’d be with my loved ones helped a lot with getting over my initial wave of homesickness. I spent time with my sitemate and when we were having a particularly rough time, something as simple as making our way to the nearest Starbucks (a solid two-hour bus ride away) for the day, getting Frappucinos, and hanging out in a familiar space was incredibly, incredibly therapeutic, as strange as it sounds.

I was also in a long distance relationship, and moving abroad definitely took a toll on us. We went from living in the same college town to navigating a 12+ hour time difference, not seeing each other for 6 months at a stretch, and establishing separate lives in our new cities. It took a huge amount of adjustment, patience, and money on both ends to make things work under those circumstances. Things like Snapchat and iMessage definitely helped us stay in touch on a daily basis, but nothing helped as much as visiting each other, which was naturally an expensive undertaking.

Learn a little Turkish before you go—even just things like “thank you”, “how much is this?” and “where is x place?” I got a Charles Schwab brokerage account, which I’d recommend. It comes with a fee-free debit card, meaning you can use it at any ATM internationally with no fees, and they have good customer service. I lost my card in Turkey and they messengered me a new one within a week.

Also, be prepared to be patient. I underestimated how much waiting around I’d need to do when dealing with Turkish bureaucracy. Everything in Turkey just took a really, really long time—from getting my passport replaced, to opening a bank account. Other than just learning to be really patient and always carrying a book with me on any sort of official errand, there wasn’t much I could do with this one.

I entered the country on a single-entry work visa, which costs Americans around $58 and needs to be applied for at a Turkish consulate in advance. Shortly after I arrived in Turkey, I started the process of applying for my ikamet, or residence permit, which is valid for one year and costs about $75 to obtain. This required a few visits to the Foreigners’ Department at the local police station and took about two weeks to be processed. Getting an ikamet required us to have a letter from an employer, proof of income, a Turkish bank account, and health insurance. I was really lucky to be able to get health insurance and proof of salary through my university relatively painlessly, but it’s definitely a few logistical steps that need to be planned for in advance of getting your ikamet sorted. Bigger cities like Istanbul generally have longer wait periods for an appointment and longer processing times, so that’s also something to take into consideration.

I was really surprised by how expensive non-Turkish food — from cheddar cheese to rosemary — can be at supermarkets, or even in restaurants. At one particularly desperate point, I spent $12 to buy five individual slices of extremely mediocre Gouda. It was definitely the most expensive grilled cheese I ever made. I definitely got a lot more creative with my cooking while there, so that was an unexpected plus.