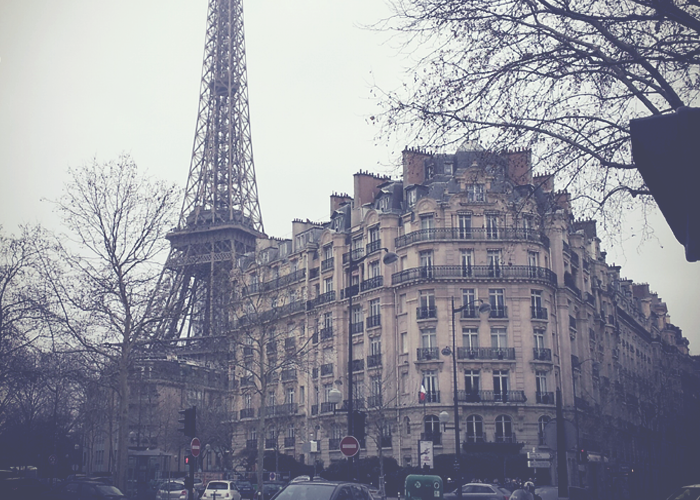 Last week, we featured Amsterdam. This week, our “foreign correspondent” is Sofia Narvaez-Gete, who is originally from Mexico, grew up in the United States, and currently lives in Paris. She answered the following 10 questions:

1. What city do you live in, and when did you move there?
I live in Paris. I moved because I met a French guy when I studied abroad here. We hopped around after I finished school, moving to one country, staying until one of our visas ran out, then moving to another. Eventually, when we were choosing where to stay, it was easier (in our case) for me to move to France, than for him to move to the U.S., or to Mexico.

2. What do you do for a living abroad?
Currently, I work for an American art and design university in the office of student life. I handle immigration, housing, and cultural activities for 300 students each year.

3. How exactly did you get that job, and how were you able to fund your move?
In France, you normally study one thing, and work in that field for the majority of your career. In the U.S., I studied comparative human development. My job search in Paris was guided (and limited) because I had to find postings for native English or Spanish speakers. I’ve worked in high schools, for publishers, in learning centers, and for universities.

I knew I was moving to France about a year before I did. I saved as much as I could to help get me settled, and left money behind in my U.S. account to continue paying off student loans. (By the way, I would encourage people to do their studies in France, where you pay about 400 euros a year, even for a Master’s.)

4. What are your monthly expenses?
My expenses are rent, groceries, going out, and student loans. In my experience,  a 30-square meter one bedroom apartment, in southeast Paris, costs about 950 euros. My husband’s mom owns our apartment, so she generously gives us a good deal on rent. If you were to live in a much nicer part of town, apartments of the same size could go for 1300 euros.

My 70 euro/month metro pass is completely paid for by my work, and most employers will pay for at least half of it. Going out to a nice dinner with friends can cost anywhere from 25 to 40 euros, but we usually cook at someone’s house.

In terms of groceries, my apartment, like most Parisian apartments, has a tiny kitchen and fridge, so I actually end up spending less on food (and waste less) than when I had a big fridge. I also try to order my produce from a group in which local farmers sell their wares for the week (it’s called La Ruche Qui Dit Oui).

Finally, as I’ve said, I transfer money back to my U.S. account to continue paying my student loans.

Paris has so much culture: museums, films, food, nature. You can really find anything. I like living in cities, and Paris is the perfect size. Mexico City, where I’m from, is too big. Chicago, where I lived for a long time, is too spread out. But Paris is just right. It’s easy to get around on foot, by bike, or using public transportation.

I had a built-in network of friends from my husband, plus friends from college that (for a variety of reasons) found themselves in Paris, which helps a lot. Making French friends isn’t always easy, but it’s easier to make friends from work or school, if you’re studying. Learning the language, I think, is very important. I didn’t speak very well when I moved here, but I got better at it by speaking in French as much as possible.

The biggest challenge for me is that you hear “no” a lot. Sometimes It feels like if you don’t push for a different answer, nothing is possible. I hear “no” with bureaucratic stuff, when trying to return something at the store, and even when retrieving mail at the post office.

In the U.S., especially in Chicago where I lived for 12 years, people could tell I was Mexican/Latina, and thought nothing else of it. Here, I look northern African, but my accent outs me, so people are always asking me about my “origins.” In terms of food, even though there are a lot of Mexican places that have popped up in the last few years, I get my fix from making it myself at home. (Visiting friends will smuggle me chorizo and peppers.)

7. What obstacles did you face when moving abroad, and how did you deal with them?
My biggest obstacle has been finding a clear job path. I have a wide array of skills and experience from varied jobs. I’m trilingual. This is a personal obstacle, and also stems from the fact that the culture is rooted in studying one thing, and working in that field for a long time. I haven’t been able to feel accomplished career-wise, because I feel like I have limited choices, but I’m aware that might have also happened in Mexico or in the U.S.

8. What advice do you have for someone looking to move to your city?
Come with patience, be open to learning and speaking French, and enjoy! Paris is a gorgeous, delicious, fun city. It’s not always easy, and you might not fall in love at first glance, but take time to get to know it, and you’ll find your place here.

9. What was the process like for acquiring a visa before moving? How much did it cost?
My first visa in France was a temporary work visa, and I can’t quite remember how much it cost. My second visa was a spouse visa, which didn’t cost anything. However, once you’re in France, you have to validate your long-stay visa at the OFII and pay with fiscal stamps, which can cost around 100 euros (58 euros for students). Renewing your residency permit card every year can cost around 130 euros each time (for the type I have, at least).

I’m starting to apply for citizenship, which will cost several hundred euros. That includes getting documents officially translated, getting a background check in the U.S., and the application fees. The fees themselves are cheaper than applying for citizenship in the U.S.

10. Are there certain expenses in your country that surprised you?
Taxes! Each paycheck, money gets taken out for social costs, but once a year you have to pay federal taxes. In the U.S., you usually pay the taxes in advance for the year and then either calculate if you owe more, or are owed a refund. That’s not the case in France. You have to start putting money away for taxes in advance. You can get into a trimestral payment plan, but we couldn’t do it this year because of a technical glitch.

Also, in France, there really aren’t credit cards. You can buy big items on credit that you get through a store, but credit cards, as we know them in the U.S., just don’t exist here. I sometimes find that France kind of forces you to be smart(er) with your money.

Sofia Narvaez-Gete is a Mexican-American living in Paris. She’s trying to make this her #yearofcareer, so look her up on LinkedIn.