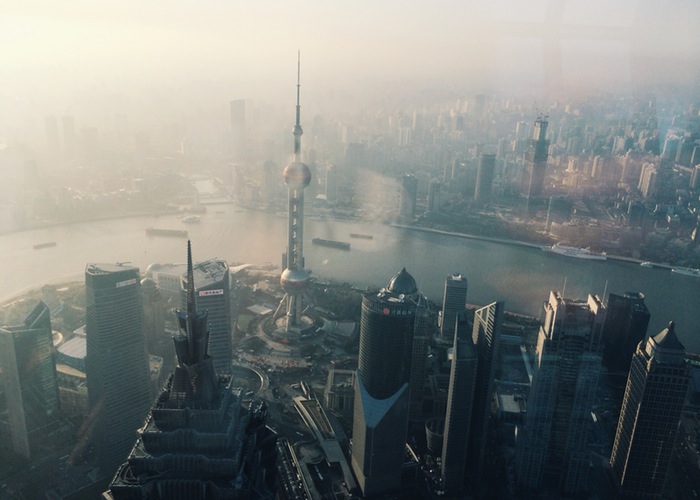 Last week, we featured Turkey. This week, our “foreign correspondent” is Astrid Adams, an American living in Shanghai. She answered the following 10 questions:

I live in Shanghai. I moved here in June of 2013 immediately after graduating college.

In my current role, I work as a Project Manager for a third party consulting company. My company is a global company headquartered in Shanghai. I am the only North American, and my colleagues are Chinese, Korean, and European.

I also teach TOEFL speaking and SAT writing on the weekends.

When I first arrived in China, I worked as an education consultant. I had never visited Asia and didn’t speak any Chinese. I learned of and applied to the job through my school’s career website. As more and more Chinese students study abroad, the number of education companies has significantly grown.

My moving costs were relatively low. The biggest expense was probably my one way plane ticket which cost about $900. My company provided a hotel for the first few weeks, and also provided a furnished apartment which significantly cut down my initial costs. If my company hadn’t provided an apartment, I most likely would have had to put down a two month deposit on an apartment ($800 – $1000).

Rent: $440 for an apartment I share with three other people. Most people I know live in shared apartments and pay around $400-$500 a month.

Transportation: $25 – $35. Public transportation in Shanghai is crowded, but reliable and inexpensive. If I take the bus or subway from my apartment to my office, I pay 60 cents or $1.25 respectively. However, unless it’s unbearably hot or cold, I prefer to ride my bike. Shanghai is relatively flat, and once you get used to the controlled chaos of the traffic, I think it’s the best way to get around.

Chinese lessons: $315 ($32 for a 1.5 hour long lesson). I meet with a private Chinese teacher 2-3 times a week. There are cheaper options for studying Chinese, but I really enjoy my teacher and I appreciate being able to schedule lessons on my own time.

Food: $350. I eat a fair amount of western food (imported and therefore more expensive) and also buy coffee three or four times a week. If I ate more Chinese food and bought less coffee, I could significantly reduce the amount I spend on food.

I also transfer money back to my American account every month to pay for student loans.

Shanghai truly is an international city. There are restaurants with all different types of cuisine, global health clinics, coffee shops, and many western-style amenities. People who have lived in other parts of China occasionally bemoan that Shanghai isn’t really China. While there are pockets of Shanghai that feel distinctly European, I would say Shanghai is still very much China. Even traditionally western activities and amenities take on a distinctly Asian style. Starbucks and Haagen-Dazs both sell mooncakes, and the McDonald’s menu boasts red bean pies.

Even after living here for two years, I feel as though I am constantly experiencing something new. Whether it’s learning a new Chinese phrase, exploring a different area in Shanghai, or trying a new street food dish, there is a lot to do here. Plus, with two airports and multiple train stations, it’s relatively easy to get out of Shanghai to explore other parts of China and Asia.

Finally, I feel very safe in Shanghai. I am much more comfortable walking around at night here than I am in New York City or D.C. This isn’t to say that petty thieving doesn’t happen, I’ve had my bikes stolen here more than once. But on the whole, Shanghai is a relatively safe city.

Yes! I spent my first night in China sobbing in a windowless hotel room. I didn’t speak any Chinese and felt isolated, lonely, and overwhelmed. I would say one of the biggest challenges has been dealing with the pace at which things happen. At first glance, this would seem like a positive, efficient way for a society to run. However, things happen so quickly that it often feels as though they are not properly thought out and end up being completed quickly, but poorly.

This seems to bleed into every aspect of life. At my job, we dive right into our projects and often get them accomplished quite quickly. But it also means that we occasionally have not properly understood or planned for the project, so we waste time doing the wrong thing. If something goes wrong with my apartment, it’s easy, quick, and cheap to find someone to fix it, but it may involve duct taping a leaky pipe, or simply painting over mold. The quick fix may get the job done, but in the end, it just creates a bigger problem down the road.

Furthermore, it is common to look at an apartment and sign a contract that same day. It’s also common for an agency to tell you that the apartment you’ve been living in is being sold, and that you only have one week to move out. As I’ve learned more about China, I’ve come to understand this breakneck speed. China has changed so drastically, and quickly, and has such a large population, if you spend too much time planning, by the time you’re ready to take action, someone else has already done the job.

When I first arrived in China, my confidence really took a hit.I went from a small liberal arts college where I had a close knit group of friends and the support of an entire academic institution to a foreign country where I didn’t understand the culture or speak the language. For me, the biggest turning point has been studying Chinese. I am able to chat with the guard at my apartment building, order my favorite noodles without pointing to a picture, and can ask for directions. Additionally, learning Chinese has helped me understand and appreciate China’s history and culture.

Making the decision to move to a new country always involves a great deal of research and due diligence. I would say this is particularly true in China. Business practices here are very different, and from an American perspective, may seem shady and even illegal. Therefore, if you are moving here for a job, I would say it’s really important to research the company you will be working for and make sure you fully understand your contract, visa standing, and compensation.

That being said, I think it is impossible to completely prepare yourself for life in China. No matter how much preparation or research you do, something will inevitably come up. There are times when I find life in China to be incredibly frustrating and difficult. However, I never regret making the choice to come here. It’s overwhelming, especially at first, but it’s also a fascinating place to live.

The visa rules in China are tricky. Most companies will assist you in applying for a visa and then reimburse you once you arrive in China. The first visa I had was $90. I applied for the visa at the Chinese consulate in D.C.  With this visa, I had to leave China every 90 days. This rule is pretty common and fairly easy to comply with. Going to Hong Kong counts as leaving China and in some ways, it’s nice to be forced to take a trip out of the country every 3 months. However, this is another expense so be sure to check with your employer about how they will compensate you if you do need to leave China for visa reasons.

I originally had the perception that all of Asia was really inexpensive. On the whole, China is less expensive than the U.S. However, given all the western amenities, it is easy to fall into the trap of buying coffee from Starbucks, eating takeout salads at lunch, and paying for after work cocktails. These expenses, while costly in America, will cost you even more in China. For example, a pint of Haagen-Dazs ice cream will set you back $13 and a gym membership is typically $60-$80 a month.

This isn’t to say that Shanghai isn’t an affordable city to live in, it is. However, you have to be smart about deciding which comforts of home you can live without.

Astrid lives in Shanghai, where she enjoys taking pictures of cats and graphic t-shirts. She is on Instagram.