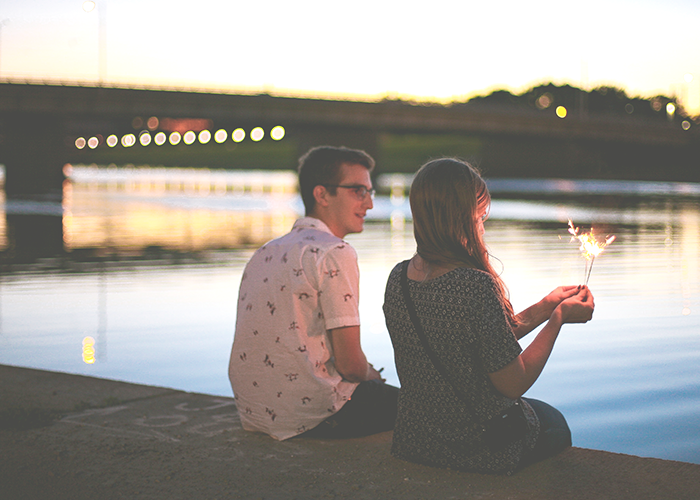 Since being honest is what we all do best here at TFD, I’m coming at you today with something that is very hard for me to say, although very, very real: I’ve recently entered a relationship where my partner is a heck of a lot more financially successful than me, and I don’t think I’m handling it quite as gracefully as I’d like to.

(A small disclaimer before I carry on: I’ve talked to him about this, and he is okay with me speaking about it here. I think he signed on for being a little exposed when he chose to date me!)

I’ve definitely talked at length on TFD about my relationship habits, but for anyone who needs a recap, I’ll summarize: I am in the business of dating absolute shit-shows. I live for men who are complete and utter disasters, it seems. For obvious reasons, dating volatile human beings who are financially irresponsible and otherwise unstable generally sucks. The only thing that is awesome about it is getting to feel like the partner who has their shit together. It is a nice stroke to my gigantic ego to be the good example, and the one who gets looked to for help and advice from their flailing counterpart. I have always been one to complain about “feeling like his mother,” but secretly get a total kick out of the fact that he needs me. It is a power trip I need to stop letting myself go on.

My new guy is not exactly the project I’m used to taking on. In fact, sometimes I feel like his little disaster, and wonder just why he’s chosen someone so ~young and confused~. I’m five years younger than him, which doesn’t seem like a lot, but in getting-shit-done years, there are noticeable differences. He has a pretty well-established career, and I’m still over here trying to figure out what my major even qualifies me to do once I finally graduate. I am trying my best to do things I like and begin to build a career for myself, but I’m hardly earning a living right now.

This makes me feel not only personally insecure and inadequate, but also like I’m perpetuating the (in my opinion) inherently anti-feminist belief that men should be breadwinners and women should sit idly by enjoying the perks. So, my desire to outearn my partners and be more financially successful than them is rooted in not only personal insecurities, but also my fear that my work as a woman will never be as important as the work of the man next to me, who will always seem to be at least 21% more worthy and capable of making money than I am. I don’t want to enjoy anyone else’s perks. I want to work hard and earn the life I want.

Another big reason why this is all hard for me is pride. I have a lot of it, and I know it is a truly unattractive trait. I don’t like asking for help, and I don’t like acknowledging that anyone on planet earth is more knowledgeable than me on any subject (even though deep down I know that most everyone is more knowledgeable than me on many subjects). I also don’t like the feeling that anyone is giving me something I can’t give myself. In fact, even though I know very well that most of the time when someone buys me something, it is simply because they want to, I still sometimes believe that they’re doing it out of pity and charity. I have a hard time letting my boyfriend buy me a cup of coffee, and when I do, I’m racked with guilt and disappointment in myself for not being the one who picked up the tab. I want to be impressive and prestigious, I want to be needed, and I want to be in control. Of everything.

But the truth is, most of these noticeable differences between him and me are simply due to the places we are in life. The five years between where I am and where he is are years where a lot of shit tends to happen. Instead of being so insecure about the fact that I haven’t graduated and accomplished all I want to career-wise yet, I should actually just be thanking whatever blessed force in the universe sent me a human boyfriend who wasn’t a disastrous piece of shit. It is also very important to note that, after having this discussion with him multiple times, it is clear to me that he is fully supportive of my ~journey~ and is proud of me for what I’m accomplishing now and how I’m trying to accomplish it, and agrees that I just need a few years to establish my adult-self and “catch up” to make myself feel more secure. He doesn’t make me feel inadequate – I do that all by myself.

My pride – and the insecurities that come along with it – are flaws that I am aware of, which I know doesn’t make them any better or more justifiable. However, I suppose it does help me to try and do things to curb it.

Right now, I am trying to shift my pride around a bit, so that instead of adoring this man in spite of his job because I’m jealous of how focused and successful he is, I will feel proud of him for being a hard-worker, and use that as a motivational tool, rather than letting it highlight my perceived failures. I need to stop letting my own personal pride prevent me from being proud of the success of someone I deeply care about. I need to stop lying and telling my family that my boyfriend is a beekeeper, and be proud of the fact that he’s a doctor. He worked hard for that title, and he shouldn’t have to feel like his successes are diminished by his financially-insecure girlfriend. What I instead should be doing is letting his work ethic light a fire under me and make me work harder at the things I love, so I can someday find myself in a situation like him. I, too, want to be working hard and doing well in a field that makes me feel happy every day.

I know there were a lot of different thoughts here, and without digging to deeply into each one itself, the takeaway should mostly be that a) I’m a crazy person who overthinks literally everything, especially when it comes to topics like money or relationships, and b) money and love sometimes mix and mingle in weird ways that leave you feeling insecure about shit that truly doesn’t matter. It is really easy to compare yourself to your partner in a way that doesn’t factor in all the stuff that really matters – like how motivated you are to set and accomplish goals, or how happy you are with the work that you do. When I struggle with my insecurities, or my pride, or a confusing combination of the two, I need to remind myself that I am not defined by the dollar-amount I make, and that my boyfriend — bless his soul — likes me for who I am, and not for what my job or salary is. And that’s why I like him, too.