No One Wants Your Comments About Their Engagement Ring 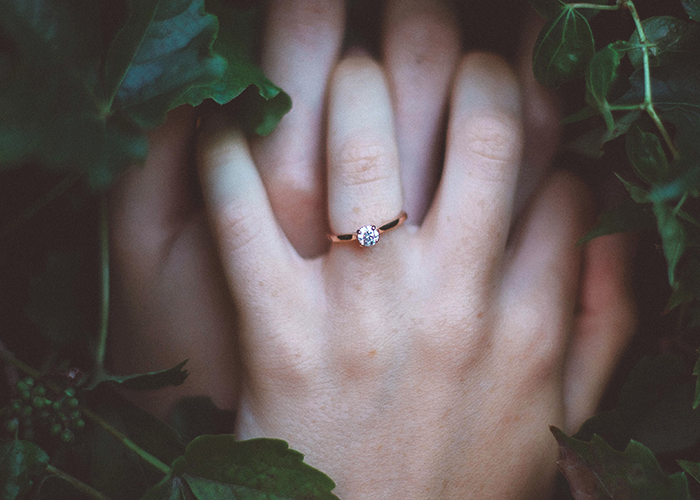 As I walked into the elevator that would take me up to the fifth floor for an ~important~ afternoon meeting Chelsea and I were headed to, I glanced down to my left hand. I slipped my engagement ring over my finger, gingerly placed it in the zipped portion of my wallet, and tucked in safely inside my purse. There it would remain for the next hour and a half — discreetly and out-of-sight. When we left the building, I ducked into the bathroom, slowly fished the ring out of my wallet, and put it back on my finger. It wasn’t the first time I’d taken it off for a specific work-related event, and it surely wouldn’t be the last. Does that sound insane? Maybe. But, to me, it’s a small way I ensure that when I’m talking to people in a professional setting (where there’s a lot at stake), that the focus is on me and my words — not my ~bling~.

I got engaged in December of 2014, and, though I am biased, I think my ring is beautiful. It is however, very “diamondy” as someone once described it — a rather-large center diamond surrounded by a halo of smaller diamonds. At the time I got engaged, I didn’t give much thought to what the ring would represent to other people except the love and commitment that my soon-to-be husband and I made to one another. It was a symbol. Simple as that, right? Wrong. Over the next few years, as I moved from a small town and into a big city, met scores of new people, transitioned into an entirely different work/office setting, I came to learn just how much is tied up — emotionally and socially — with putting an engagement ring on display. If you do, chances are you’re going to be on the receiving end of comments about it that you may or may not want to hear.

For example, my own ring has solicited a few comments that have made me feel uncomfortable and insecure — especially the ones I’ve received while at work events where I perceive that the TFD brand is on the line. I mean, I co-run a website about personal finance, and hearing someone call my ring “bling bling” feels shameful because I feel like the ethos of what I do for work could be potentially undermined. (I’ve had everything from waitresses to friends make comments about how they, too, love “bling” — an implicit assumption about me and my tastes that I’m not even sure I identify with.) I fear that people will think the worst and assume, “how budget-conscious could she possibly be?!” I fear people will not take me seriously. I ask myself, “Do people think I’m high maintenance and that I don’t need to work because I have a rich husband at home?” YIKES. I’ve had people pointedly ask me “how big is it?!” which makes me feel confused as to how I should answer. I know who I am in my own head! I know I work hard! It feels frustrating to imagine that people are making unfair assumptions about me and the work I do. As I mentioned above, there have been several occasions when I’m at a work meeting — where we’re asking people to give us money — and I’ve taken my ring off; I want to avoid someone’s subconscious bias toward me. I wonder, “what if they imagine I don’t really ‘need’ the money?”

Engagement rings all look different: big, small, diamond, ruby, sapphire, wedding band, or no wedding hand, gold, platinum, silver, custom-made, or straight from the case — I could go on and on. However, whichever way you slice it (and whether you like it or not) an engagement ring is a marker, not only of love, but of wealth. Or at least the wealth you’re willing to spend on one piece of jewelry, which draws laser-focused attention like no other piece will. I know women who wanted the biggest possible diamond money could buy — regardless of quality — and I know women who wear vintage rings that have been passed down through generations in their family. (And when we know that the prices and “value” for diamonds are intentionally inflated through market manipulation and advertising, it can be hard to even know what even makes a diamond ring “valuable”.) Each person should have the freedom to decide what’s right for them. But, there’s simply no getting around the fact that when you put an engagement ring on your finger, it’s an invitation for people to judge you in a way they wouldn’t have otherwise.

“It”s so big and tacky!” “Sapphire? SO unfashionable!” “It’s so tiny, it’s like a chip of a diamond.” “No engagement ring at all — does she think she’s better than me??” These are just a few of the pointed comments I’ve heard over the years. Personally, I think it’s uncool that people feel as if they get a free pass to say whatever unsavory thing they want (and I admit that I, too, have made assumptions about women based on what their engagement rings looks like, but I’ve REALLY tried not to give them any weight). That said, comments said in private amongst friends in social settings are just one part of the equation, but what happens when those comments take place in a work setting?

What happens when it’s your boss, supervisor, co-workers, and/or clients taking notice of your engagement ring and dolling out comments about it? What happens if they see an engagement ring and start filling in backstory whatever way they want? That kind of thinking has the potential to be dangerous if it affects one’s career and how they’re treated at work. For example. the same way I feared people across the conference table would judge me and determine I didn’t really “need” the money I was asking for, could be the same way a supervisor feels about a raise at the office. Just a few articles I’ve read suggest that there are consequences to wearing engagements ring at work, regardless of size. For example, this Levo article talks about some assumptions, saying:

Diamond engagement ring.
“Will probably need time off for the wedding and honeymoon.”

Diamond ring with wedding band.
“Wonder if there’s a maternity leave in her future or little kids at home?”

Gigantic diamond ring with wedding band.
“Hubby must earn a good living so she doesn’t need this job. Probably high maintenance who will whine or quit if she can’t have her way.”

Assumptions like that, which aren’t necessarily based in truth, but rather born out of an emotional response and/or subjective judgement, means I have to push myself to work harder to gain the respect of colleagues.

It’s shitty for sure, but some of the comments that I mentioned above make it clear that women need to really consider the signals their ring might be sending out. Another article that appeared on Vogue.com quotes male recruiter Bruce Hurwitz, who bluntly describes how wearing a big engagement ring might hurt your chances of getting a job. It reads, “Hurwitz says he’s seen that when women come to job interviews wearing big engagement rings, they tend not to get the job. But when they leave their rings at home, they are more likely to be hired.” Of course, people certainly disagree with him and call his advice “sexist.” It’s unfortunate that women have to think about it and men don’t — it’s a much less complicated decision for a man in an office. They wear a simple band that’s usually not an indicator of how much money he has or his personal taste.

It should go without saying, but everyone feels differently about this issue — it’s a touchy topic, which makes it tough to navigate. A completely innocent compliment or observation can be taken the wrong way or offend someone. Without us realizing it, our comments about engagement rings can reveal an insecurity or confirm a stereotype. It’s not as if anything anyone says with regard to an engagement ring is loaded and judgey and terrible — it just means we have to be more conscious of the how and where we make remarks.

I really believe that no one should feel ashamed for wearing whatever kind of engagement ring they choose to, and it shouldn’t define who you are in the workplace. For myself, I try to be discreet with it in professional settings, I remove it when I think it’s appropriate, and I don’t flash it around. It’s something I’m able to fully enjoy without having to be the type of person who mentions it frequently, and I do my best not to make comments about other women’s rings. I think the most important thing we can all do is try and see people for who they are first and foremost, focus on their work, and keep our comments to ourselves. This will reduce the focus we put on material things, and put less pressure on women in general to have the kind of rings that elicit “oohs” and “ahhs” from people. I love my ring, and I’m glad I’ve been forced to think about these issues more deeply and consider how it comes off in a professional setting — I’m wiser and more lucid about it, which I’m grateful for.