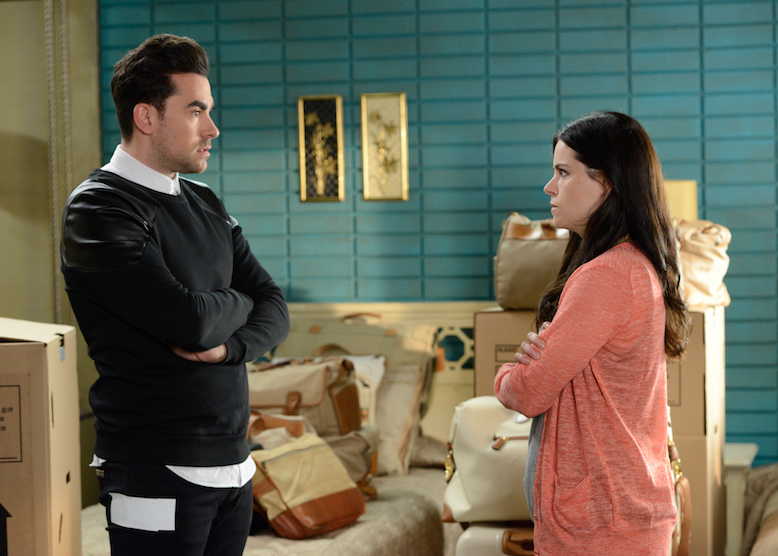 I seem to be the only TFD team member who has jumped on the Schitt’s Creek bandwagon. (I’ve already watched, and re-watched, the entire series with Peter.) That honestly makes me sad, because it’s such a lovely, weird show, and also jealous, because they all still get to watch it for the first time. And I’ve thought about writing about what the show says about money, but I don’t think it’s really anything new: A rich family loses everything and has to uproot their lives. They find greater limitations with less money, but also bond more closely with one another. They find value in having to rebuild their lives and actually working towards something for the first time ever (or at least, for the first time before they found wild financial success). It’s a nice narrative, and it doesn’t need to say anything groundbreaking about money — it’s a refreshing show in so many other ways.

But it hit me recently that you can take away a few solid tips for style on a budget from watching the show, specifically from the character of David Rose.

Major caveat: I know that the Rose family is known to (still) only wear designer labels despite their family’s great financial misfortunes. Absolutely nothing David wears could ever be considered “budget.” He would probably read this headline and tell me to eat glass. But hear me out!

Now, obviously, Moira has the most iconic looks on the show, period. And I personally would love to own pretty much half of Alexis’ closet (I would wear the heck out of her “A Little Bit Alexis” dress). However, both of their style choices are far too outfits-over-staples to be applicable to more modest budgets, in my opinion. But when I think about the style parameters David has set for himself, they actually seem very applicable to anyone — not just sons of millionaires (billionaires? idk) who somehow still have an endlessly updated wardrobe five years after losing everything.

David Rose’s Fashion Rules (That Work For Any Budget)

1. Proper care is just as important as the quality of your clothes.

“David what are you doing?” “Reorganizing my knits!” Even after having to uproot his life, move to the town of Schitt’s Creek, and start sharing a motel room with his sister, David has always managed to take care of everything he owned. He may be a little, shall we say, particular at times, but he even managed to build (or rather, get Mutt to build) a cedar chest to store his sweaters when he noticed they were becoming a little moth-bitten. I love this about David because, even though he came from an excessively privileged upbringing and definitely needed some character growth at the show’s outset, he’s always taken care of and pride in his things. I’m not positive we’ve ever seen him repeat an outfit, but he’s never treated clothes as disposable.

No matter how much money you spend on a piece of clothing, caring for it properly makes a huge difference in how long it will last you. I can point to the items in my closet that have lasted me the longest, and it’s usually not that they were more expensive or certain labels — I simply took care of them better. For instance, I have a pair of black platform heels that I got for my 18th birthday. 9.5 years later, I can still wear them with all of my fall and winter going-out ~lewks~, because I’ve managed to take such good care of them (and they’re still super comfy!). I never throw them around or slip them off without unfastening them properly, and it’s made a huge difference.

2. Sticking to one color scheme means you can make more outfits out of fewer pieces.

Pretty much everything David wears is either black or white. Same with Moira — a lovely manifestation of at the mother-son duo’s likemindedness, IMO. Now, I would never stick so firmly to not wearing colors, but I do believe that sticking with a color scheme makes it so much easier to put outfits together. I’m not going to comb through the series episode by episode to see if David has ever actually re-worn anything (though trust me, I would do that). But by simply observing his outfits every episode, you can tell that everything in his wardrobe coordinates. By keeping it simple color-wise, he could mix and match to his heart’s content.

If you’ve been following TFD for a while, you may remember a time when Chelsea preached her gospel of #neutrallife — buying only neutral wardrobe items, because that way, all of your clothes coordinate automatically. It’s similar to having a “uniform,” making it as easy as possible to get yourself dressed every day. And, if all of your clothes go together, you’ll realize something: you can buy less of them. Again, I would never personally stick with only neutrals, but I do really like having a few items in the same colors so I can create many different outfit combos in colors I know I like. (Mine are typically light pink, dark green, and dark blue.) Plus, sticking to one color scheme also means that, when you do decide to break the mold and purchase something out-of-the-box for you, it feels like a treat!

3. One or two statement accessories is enough.

David is proof that you can invest in just one or two statement accessories, and they will still be “noticeable” even after five years of wearing them with every outfit. Seriously: he has been wearing the same four chunky silver rings for the entire run of the show, and I still notice them every time. They are pretty much his signature — an expected part of his daily ensemble, but still eye-catching.

I think there’s something to this habit of sticking to a signature statement accessory when it comes to styling yourself on any budget. Obviously, it’s more than fine to own more jewelry and accessories that that, but the point is that you don’t have to. I definitely fall into the trap of thinking that I don’t have the “right” pair of earrings or necklace for an outfit. I’ve spent a lot over the years on cheap costume jewelry that I didn’t end up wearing more than a few times, and that also didn’t hold up very well. And it all feels a bit wasteful, because while I’m glad I do have several colorful jewelry pieces I can wear to change it up whenever I feel like it, I almost always return to the same few pairs of gold earrings (and, okay, one pair of pink tassel earrings that seems to go with every single thing I own).

I think it’s most important to remember that the person who notices the jewelry you wear most is yourself. Wear and buy what you want, of course. But keep in mind that you might get more satisfaction from taking time to pick out just a few pieces that you really, really love, and that you can coordinate with everything. For me, it’s easier to not get bored with a signature item when it still feels different enough from what everyone else is wearing, a la David’s rings. They’re not super outlandish, but he makes them less “normal” by wearing them differently than most people would (i.e. all at once).

And this doesn’t just go for jewelry, of course — I only own three purses that I switch between. They are all cross-body bags because I know that is the only style I like carrying around. One is neutral, and the others are fun colors/patterns. Stick with what you know you like!

4. If your clothes make you feel confident, you’ll look great.

If you’ve even simply seen the show’s marketing materials, you know David likes to push boundaries a little bit when it comes to dressing himself. He’s been known to wear a skirt (usually over pants — or maybe it is part of the pants?) on more than one occasion. And while he’s gotten a few comments on his “funky” clothing choices from other Schitt’s Creek residents, he’s never looked like anything but himself.

Having a personal style doesn’t mean spending money on wardrobe items until you feel like you look “correct” or “grown-up.” It means deciding what actually makes you feel like yourself, and making your spending choices from there. They don’t need to be expensive, or numerous — they just have to be yours.