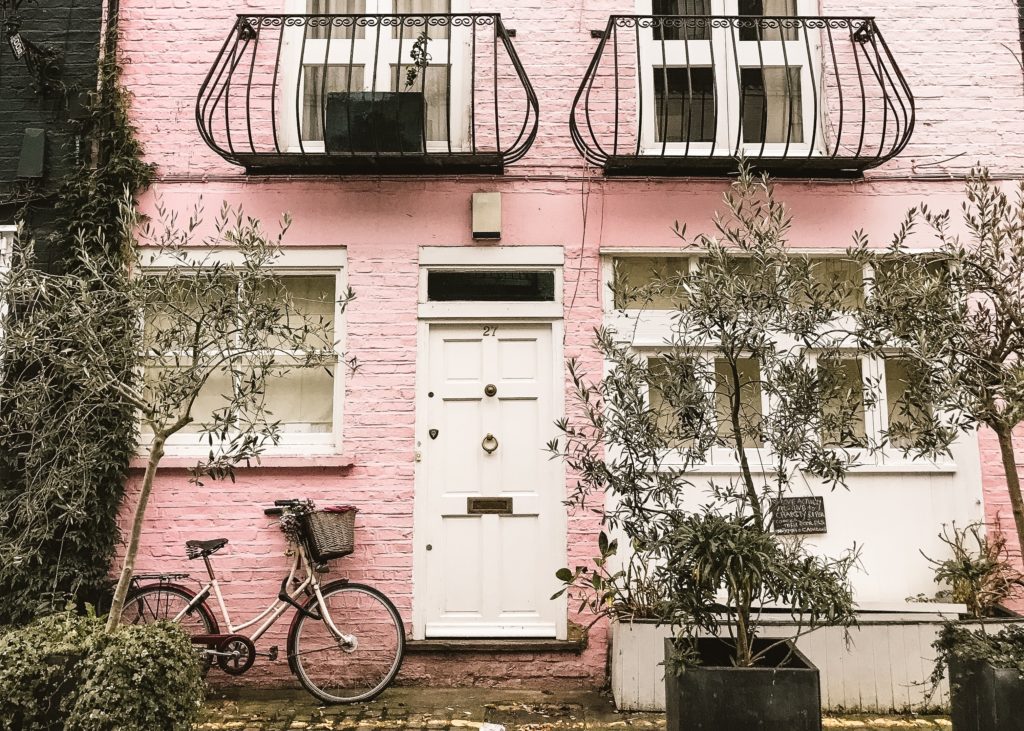 I’ve had problems being a clean person my entire life. I don’t mean not showering — I mean throwing out my trash but never cleaning dishes or putting them away, letting clothes pile up until there was an unmanageable amount of laundry on my floor, never folding the laundry when it actually was clean, avoiding cleaning the bathroom for as long as possible. In my first New York apartment, it didn’t help that my roommates and I were all decidedly non-neat-freaks and tended to enable each other, letting clutter collect around the apartment until we’d have to dedicate an entire weekend to cleaning stuff up. (I’ll spare you the details of what we found under the couch when we moved.) I always loved being in the clean and cozy homes of “real” adults, especially after having grown up in one. But I didn’t bother taking care of my own possessions or living space, not understanding that having one of those grown-up homes was completely accessible to me, regardless of roommates or temporary living situations.

I never wanted to put off becoming an adult. I was already researching colleges by the time I started tenth grade. My eventual college graduation was nothing but a happy day — I knew I’d miss the town, but I was thrilled to be moving away and finally starting life on my own. Yet, as much as I was so ready to be a grown-up, there were a few things that held me back from properly feeling like one for years. And the biggest thing was my propensity not to clean.

I know that being an adult does not mean being a clean person. I have friends who are doing highly impressive things career-wise but don’t bother taking the time to make the bed every morning or put the dishes away every night. But holding onto my less-than-clean habits wasn’t something I was comfortable with — rather, I just did so by default. When I used to work from home 100% of the time, I’d routinely spend entire days leaking money just to use coffee shop wi-fi because the state of my apartment gave me so much anxiety. I hated being around my own cluttered habits, but I couldn’t seem to break them, and I perceived anyone who was the opposite as intimidatingly put-together.

Last year, I finally managed to go through all of my belongings and (mostly) defeat my worst cluttered habits before moving into a temporary space with my boyfriend, Peter. We were to live in that apartment for the better part of a year before finally moving into a more permanent space just over a month ago. The in-between space never really felt like home to me, since I always knew we’d be moving (and was honestly counting down the days). I spent the first three weeks or so being pretty meticulous about keeping it neat, even regularly wiping down the baseboards — something I’d literally never thought to do before. But I quickly gave in to the fact that I would rather just not put in the effort, especially since I knew I’d be moving relatively soon. It helped that I now lived with an actual neat person, so keeping up with dishes and making the bed every day (i.e. embracing the fact that Peter made the bed every day) became a habit. But my own clothes would still pile on the floor, and most of the time, things just weren’t as clean as I’d wished.

Then, our plans to move became more defined. No longer was I anticipating the far-off day when we’d finally be out of Midtown — we had an apartment all set and more than enough savings to cover the move. And for the first time, I got to actually put together a living situation that I really loved. I got to plan out the new furniture and decor with a partner who was 100% as enthusiastic about having a nicer living space and only 10% as passionate about color schemes. With some parameters, I could basically make my home look exactly how I wanted it for the first time in my life.

And after a week of moving in, unpacking, watching Peter put together furniture, painting, and deciding where to put everything, I realized something: I actually really cared about keeping the apartment looking really nice on a daily basis. It finally felt like the grown-up home I’d always wanted to live in. I was proud of it, and I wanted anyone who walked into it to always feel comfortable immediately. And I knew a huge part of that would come from keeping it clean.

So I did what any good capital-a Adult would do: I made some spreadsheets. First I wrote down everything I wanted to make sure to get done every day, broken down by room (for what it’s worth, Peter uses our bedroom closet and I use the guest bedroom closet, because why not): 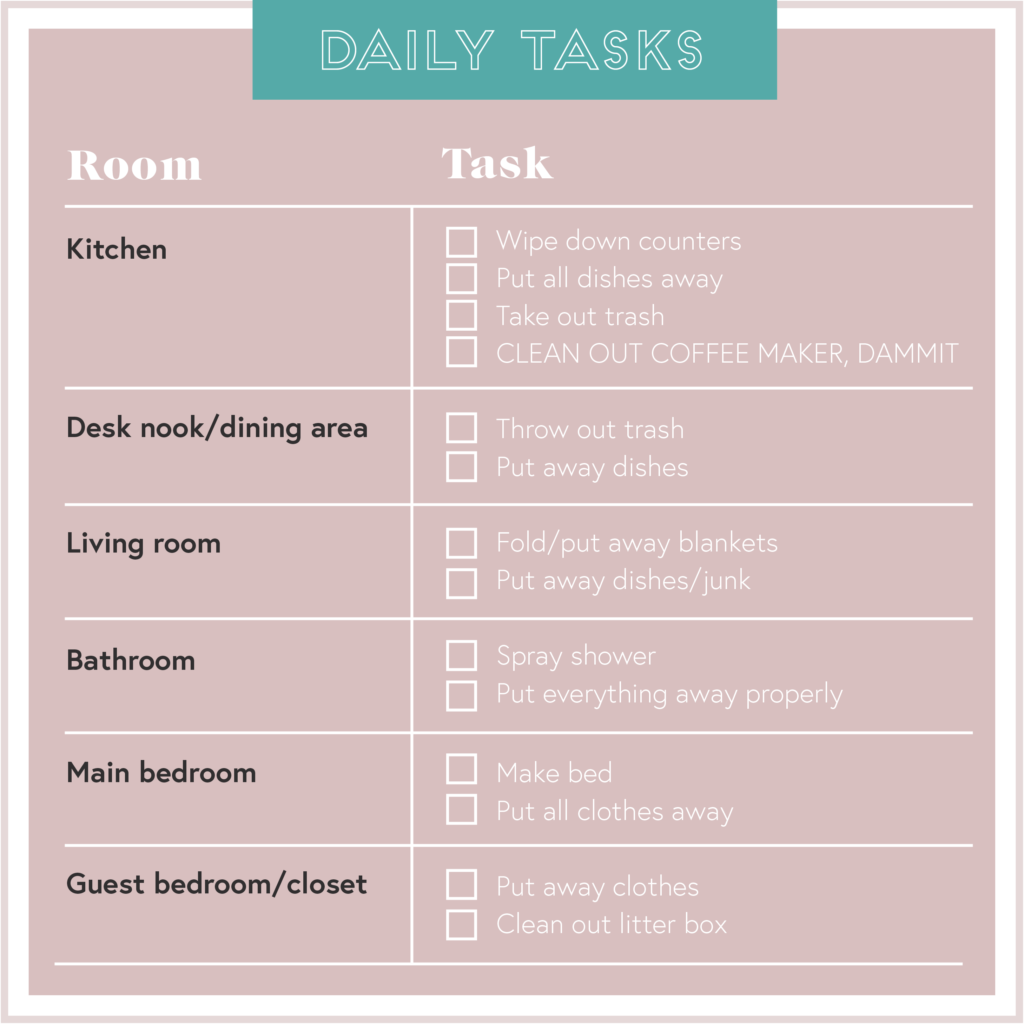 Then, I went room by room to make a weekly cleaning to-do list: 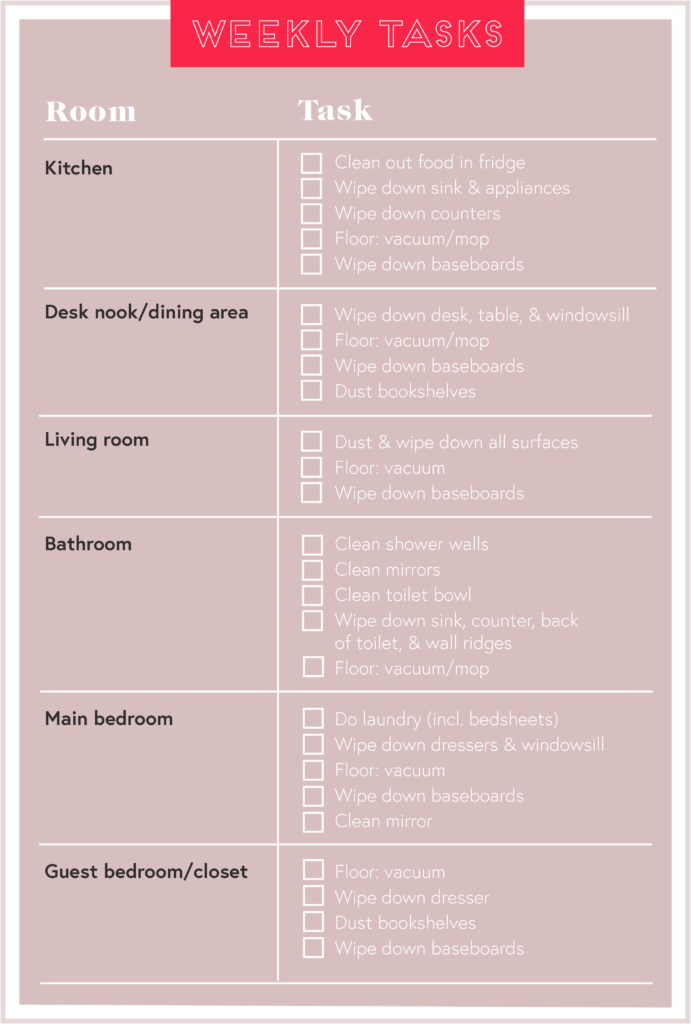 And then I went through and wrote down the things I always know I need to do, but probably wouldn’t need to do more than once per month: 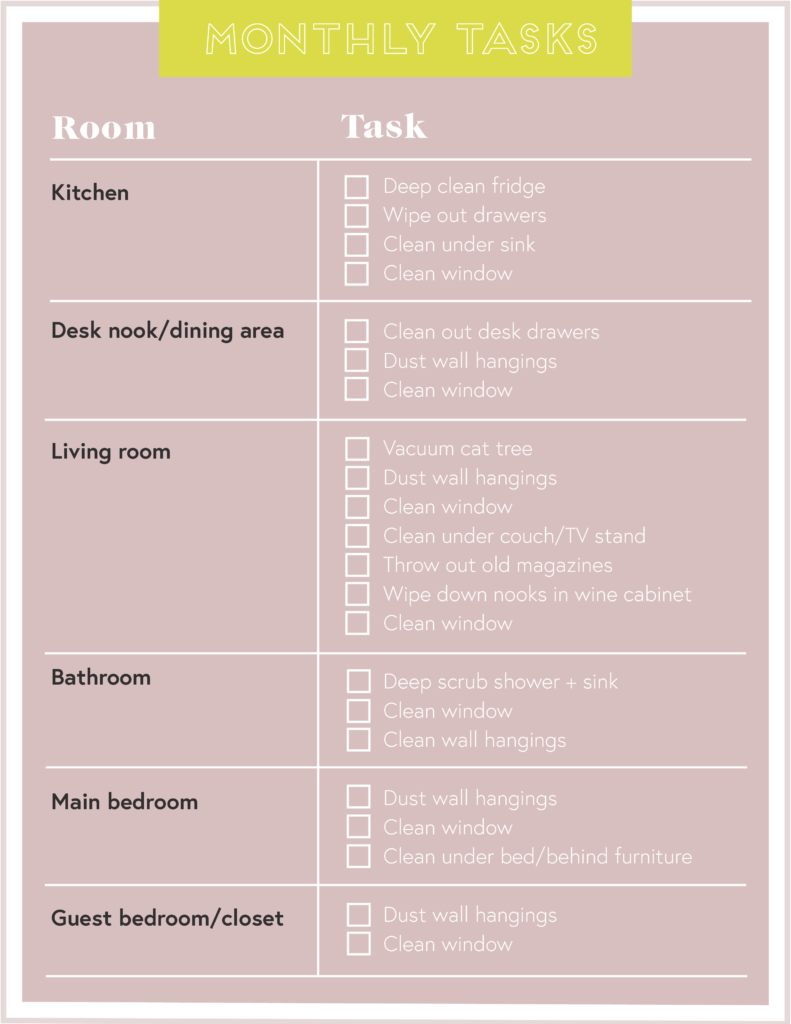 I think this should go without saying, but to clarify, I haven’t been doing all of these/won’t be doing them all myself — Peter and I basically split tasks 50/50. (Though it’s not like we keep score.) Also, I must admit that these sheets are pretty aspirational. I’ve still had a day here and there when I’ve left my clothes to be dealt with in the morning, and I’ve only wiped down the baseboards in the apartment once since we moved in a month ago. I can also tell you we are not the kind of people who remember to wash our bedsheets every week, though I’d like to get there someday. (And for some reason, I dread cleaning out the coffee maker more than anything. Despite the fact that I’m the one who works from home several days a week and therefore should be most in charge of cleaning it out, it is the bane of my existence. I will go to my grave trying to get out of dealing with soggy coffee grounds.)

But overall, having everything that I want to accomplish every day/week/month written down in one place makes it easier to make sure I’ve gotten around to everything on my list. Also, sharing them with Peter helps hold us both accountable for making sure everything gets done — it’s harder to let chores slip under the radar when we have a shared reference point, especially the ones that need to happen less often. The daily tasks are starting to feel more like a passive part of my routine, and the weekly tasks I’ve actually started not actively hating. For instance, cleaning the bathroom is much more enjoyable if you do it every week, because it never has the chance to get gross.

Most importantly, I finally learned to accept that having the consistently “grown-up” living space I wanted wasn’t something that was just going to happen — I needed to actively figure out how to get there, especially since I’m still not at a point where I’m willing to pay a housekeeper every week. Of course, decorating the new place has meant spending more money than I ever have on my home before, and that makes it a lot easier to care about the state of things. (I so wish that I could go back and figure out how to be a cleaner person years ago, but it is what it is and all that.) It took me a long time to realize that I actually cared about being surrounded by a home I really loved and that that is, by my own definition, a clean home. I used to so often feel burdened by all the chores I was putting off that spending time in my own space was stressful. I’m by no means perfect now, but I was making it harder on myself than I ever had to. And figuring out how to break that habit has made me feel like more of an adult than anything else in my life.