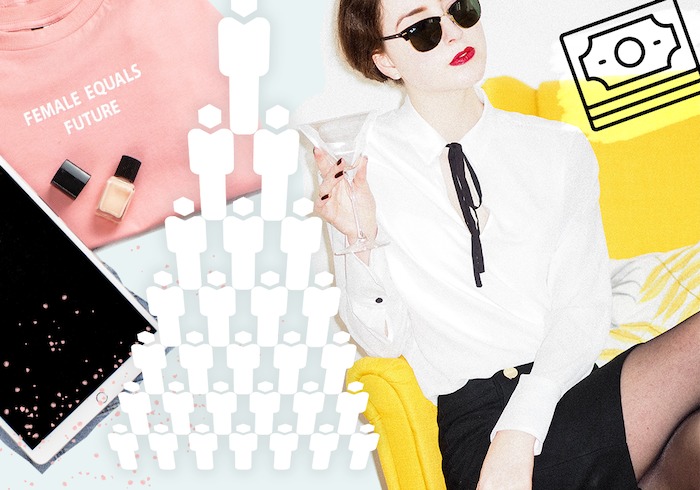 I recently received an amazing business opportunity. A stranger named *Amara —  whose Instagram bio reads ‘own your story’ — DM’d me to tell me I can earn a high income with low effort, all from my phone. It’s completely free and full training is provided, but I should probably spend $725 on a starter kit as an investment to myself. Wow!

If you’ve been on social media over the last three months, there’s a good chance you’ve received a similar opportunity. Since the COVID-19 outbreak, just about every woman I know has been asked to join a multi-level marketing scheme.

If you’re not familiar with MLMs, like Avon, Arbonne, Younique, FM Fragrance, Amway, and Nu Skin, they’re product-based businesses that recruit unsalaried sales staff to recruit more unsalaried sales staff. A study on MLMs indicates that the majority of sales staff make a loss, and reps are required to engage in “constant and aggressive recruitment” of new members.

So why are so many young women joining them? MLMs have a new target audience: the #Girlboss.

They promote the message that women are failing because they aren’t working hard enough, rather than acknowledge the simple fact that “99% of sellers end up losing money when they invest in multi-level marketing.”

In the early 2010’s, MLMs’ main clientele were suburban women in their late thirties to early forties. One paper reported that “[Avon] typically caters to the needs of persons between the ages of 35 to 45 years old with higher education above high school.” MLMs were even parodied in a 2015 episode of Schitt’s Creek when David and Moira join a pyramid scheme, only to learn the craze had swept through the town two years prior. At the same time this show aired, Sophia Amoruso’s #GIRLBOSS had just been published, and a new generation of younger women were becoming empowered by the idea of owning a business, smashing their #goals, and living their best lives on Instagram, all in the name of feminism.

Recent essays like Leigh Stein’s The End of the Girlboss is Here have shed light on the demise of this mindset, but it’s still thriving within MLMs. Grace Wilson, a librarian who runs @MLM_busters, recently claimed that these companies “use ‘women supporting women’ to build a captive customer base of ‘empowered’ reps spending money” and explains that they “co-opt feminist language to justify exploitation.”

Outdated #girlboss messages like the popular ‘You have as many hours in the day as Beyonce’ lend themselves perfectly to MLMs because they promote the message that women are failing because they aren’t working hard enough, rather than acknowledge the simple fact that “99% of sellers end up losing money when they invest in multi-level marketing.”

You can see this in action on pro-MLM social media accounts. They post the same unactionable advice we’ve seen since the dawn of Tumblr feminism, like ‘Girl, get out of your own damn way’ and ‘Hustle beats talent.’ Delve a bit deeper into these millennial-pink posts and you’ll find problematic boss-shaming messaging like ‘If you’re not careful, your own fears and insecurities can trick you into a mediocre life.’ and ‘You spend $10/day on breakfast and lunch. That’s $300/month. You can start a business. You just won’t prioritize’.

While pyramid selling may seem like a clear no-go, it’s easy to understand why some see the appeal. The Instagram account MLM Debunked states, “the pandemic has left a lot of people in positions of financial uncertainty and distress, which makes them primed for an MLM pitch or “opportunity.” They add that “MLMs flourish amongst vulnerable and desperate populations.”

The global financial crisis has disproportionately impacted women, especially women of color, and lockdowns have created increased isolation and mental health issues. Both MLMs and Girlboss culture offer a way to fix this: Improve your mindset, join a community of like-minded women, and, above all, get rich. Unfortunately, they also encourage excess spending and an unhealthy work/life balance.

In her essay on her personal experience with the #Girlboss mentality, Gina Vaynshteyn detailed how she spent money on non-essentials like manicures to look more “boss” and voluntarily worked 18-hour days to climb the corporate ladder. Similarly, the MLM recruiter I spoke to told me, “The harder you work, the more money you will earn” and listed “showcasing your life and making it look attractive” as a selling tactic.

Just as joining a pyramid selling scheme is unlikely to bring you financial freedom, working to exhaustion and spending your earnings on non-essentials to appease your Instagram audience is rarely a recipe for happiness or personal success. Until we all begin to acknowledge there’s more to life than “the hustle,” and that struggling financially is not a personal failure, MLMs will continue to recruit and exploit aspiring girlbosses under the guise of female empowerment.

(If you or someone you know has been affected by involvement in an MLM, you can find help and resources here.)