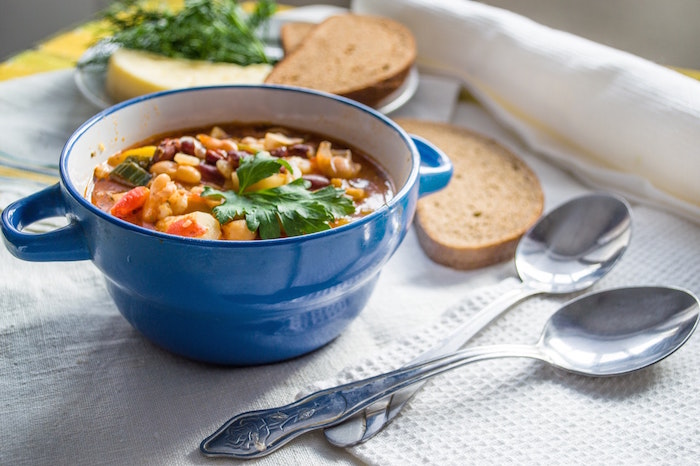 This week at TFD, we had a very serious, important discussion in the company Slack channel: The best, most satisfying soups for winter.

If you’re anything like us, you appreciate a tasty, hearty soup, which is especially great for meal planning. The best thing about most soups is that they are relatively easy to make in large quantities that can last the entire week. Of course, if you’re going to make a big batch of anything, it better be good, because you’ll be stuck with it for days. We asked our staff to share some of their most-loved recipes for getting through cold, winter weeknights. In no particular order, here are our favorites:

Spiced Chickpea Stew With Coconut and Turmeric: Allison Roman’s Infamous “Stew” that took IG/Twitter/the internet by storm. I could polish off half the pot by myself in one sitting. It’s that good. I ladle mine over a bowl of brown rice if I want it to feel more like a stew than a soup, and sometimes I add shredded chicken if I feel like I need the protein, but it doesn’t need it. It’s just heaven.

Chicken and Pumpkin Dumpling Soup: This soup was life-changing because it combined my love of making soup with my love of baking bread-based treats. The pumpkin dumplings have an insanely satisfying taste and texture and cook by getting steamed on top of the soup itself. You just plop them in raw and like magic the puff up into the most amazing dumplings cooked inside.

A Simple Curried Tomato Soup: This was the first soup recipe that made me fall in love with making soup at home. The recipe is super simple, but you can go crazy with the toppings. For example, I make mine with toasted slivered almonds, a dollop of sour cream, and fried herbs. But it’s perfect alongside grilled cheese. YUM.

Slow-Cooker Chicken Tortilla Soup: If you’re spending a cold weekend afternoon at home, this chicken tortilla soup recipe is a really yummy slow-cooker option. It has just the right amount of spice and you can customize it however you want. I definitely don’t make the tortilla crisps myself and I prefer it (as I do all foods) without the cilantro! Bonus: there is cheese involved.

Classic chicken soup. I don’t have a favorite soup recipe, but I like chicken noodle!

Editor’s note: A classic choice – you can’t go wrong with a rich bowl of old-fashioned chicken noodle and vegetables.

Pasta e Fagioli: This weekend, I’m planning to make this pasta e fagioli recipe, which I love! (Peter is also going to make some homemade crusty bread to go along with it — highly recommend grabbing a good loaf!) It is perfectly comforting and tasty but also feels relatively healthy, with ample amounts of beans, kale, and carrots. If you can’t find leek in your neighborhood grocery, yellow onion or shallots would work just fine.

I’ve been making a version of this African peanut stew since I was a broke 22-year-old living with roommates. I make it at least a few times a year, because it’s incredibly easy, flavorful, healthy, and cheap! I serve mine with a dollop of sour cream, but if you skip that, it’s totally vegan. Also, I tend to use kale instead of collard greens, simply because it’s easier to find in my store. (Pro tip: get a tube of tomato paste instead of a can — that way, you can actually save what you don’t use for a different recipe later in your week!)

I’m also a huge fan of Egg Drop Soup for whenever I’m not feeling well (but still want lots of good protein)!

10-Spice Vegetable Soup: I’ve made this soup many times, and it’s so satisfying and super easy. I’m not vegan, but I do try to eat as many veggies as I can, and this soup is a sneaky way to essentially give yourself a nutrient bomb. I do sub in chicken stock, though. Some tips for the lazier among us, like myself: Use sweet potato rather than squash (it’s way easier to peel and cooks faster), go with canned tomatoes, and pick up some Cajun spice mix at the grocery store rather than buying and measuring out all these different spices. Don’t overthink the quantities of any of it, just go by taste!

My husband recently made an adaptation of this spicy Instant Pot Kimchi Jjigae and it was perfectly comforting for a cold day. Research suggests that kimchi has many health benefits, from boosting your immune system to reducing inflammation (and thus helping you age more gracefully). We used store-bought, but have a goal of attempting to make it from scratch sometime this winter.

Pho: I would be lying if I said I ever attempted to make this, let alone any soup that doesn’t come out of a can (lol), but my favorite soup would have to be pho. This is right up there with ramen for me, but pho just has more of a healing effect. My college roommate used to make it all the time, and it could cure anything from a cold to a hangover, haha.

Spiced Chickpea Stew With Coconut and Turmeric: This is my go-to recipe when I’m craving soup, and I didn’t realize it was famous until Lauren pointed it out! This stew has a nutty, savory flavor that always leaves me wanting more, so I make a big pot and eat from it all day. Like Lauren, I usually ladle it over rice. It’s also a pretty cost-effective recipe. Fair warning, though: If you’re not a fan of coconut, this might not be the soup for you. The coconut is subtle, but you can definitely taste it.