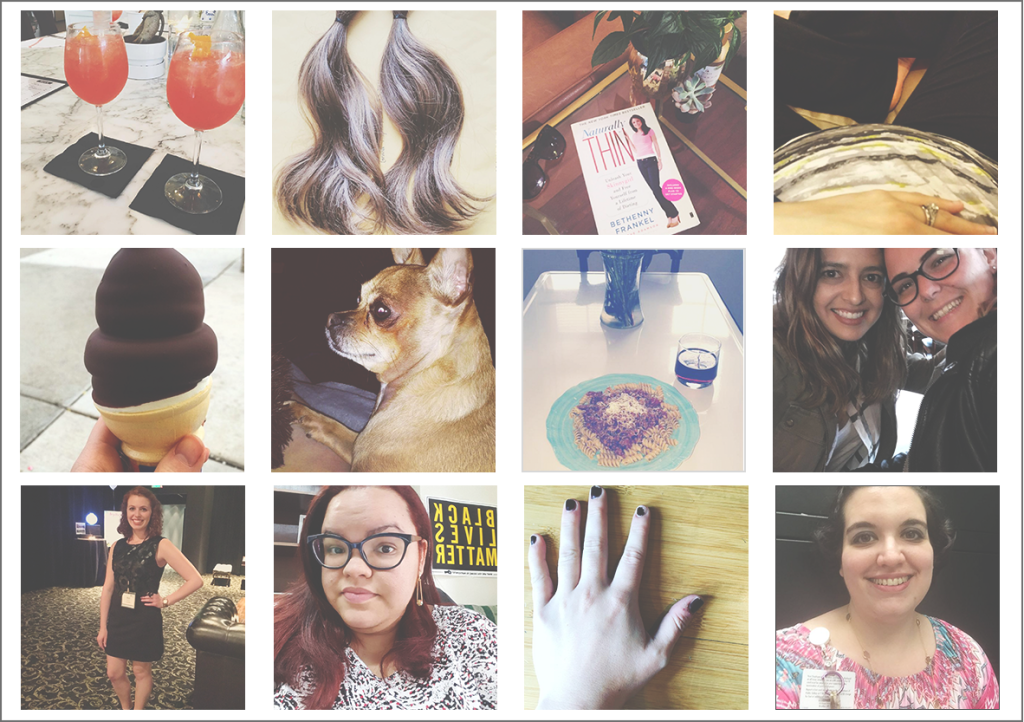 Every week, we’re participating in #totalhonestytuesday, sharing the things we’d usually keep off of social media, and giving a little more insight into our real (and very un-perfect) lives. Hopefully, in doing this, we can all feel a little less pressure to appear a certain way online, and remember that everyone around us is much more than just the highlight reel we normally see.

#totalhonestytuesday For the last TWO years I have wanted to cut my hair to collarbone length. Every time I went for a haircut, I chickened out and just got a trim. My ultra long hair had become a nuisance but at the same time it felt like a huge part of my identity. I have had long hair since middle school and I didn't know what it would be like not to be the person with super long hair. To be completely honest, biggest thing that kept me from cutting it for so long was that I was afraid that people wouldn't like it. Finally cutting it made me realize how great it is to do something that makes me happy and a huge step toward caring less about what other people think. So farewell to this foot of hair – I'm donating it to Pantene Beautiful Lengths and hopefully it gets to someone who needs it more than I ever did.

#totalhonestytuesday it's been almost exactly a year since I started intermittent fasting, and I'm still going strong with it. As of today I am 5'6 and 127, size 4-6, where I'd like to stay indefinitely. But id be lying if I said that it was entirely because of health reasons (though it is in large part, because I was not healthy at 155). The other part, though, is the social aspect. I bought this book a year ago when starting out of curiosity, and mostly laughed at it because it's so extreme and I thought "who could expend that much energy thinking about being thin?" But having been "thin" for nearly a year, I can confirm that it's addictive. The world is simply better to you when you read as thin, and people look at/treat you differently. They act like its a moral thing, and you're a better person now. They congratulate you like you just made some huge accomplishment. And once you have that, the idea of giving it up is terrifying.

If your #totalhonestytuesday is that you need a happy-hour to look forward to to get through some work days, you shouldn't feel embarrassed. We get you. 🍹

Henley Steele is 10 inches long and 1.5lbs. I am 25 weeks and 4 days pregnant. Due to some chest pain the past 2 weeks and my history of blood clots, I was placed on semi bedrest for the rest of this week. I have been vocal about my struggle with this pregnancy because I feel it is important some women know they are not alone. My days are tough, but I focus on holding that sweet baby and trying to stay calm. Obviously, this is easier said than done. I began feeling Henley kick a couple weeks ago. Those tiny kicks, punches and fits of dancing make every day I am miserable and told bad news by a doctor easier to handle. While things are progressing in a way I wish they weren't, I am looking at the bright side. My work family is understanding and allowing me to telecommute. Those small victories are what I focus on it.

#totalhonestytuesday because this little dude is my sanity and my hair is crappy because I only have cheap shampoo and am too lazy to go see my mom to get my regular kind. #hairdressersdaughterprobs #badhairday #atleastmydogiscute

#totalhonestytuesday If I'm at home, there's a 99.9% chance I eat dinner (aka popcorn or a turkey sandwich) in bed while watching makeup videos on YouTube. But for once I made a real dinner, sat at the table and enjoyed the silence 👌🏻

Today would've been my 2 year anniversary in Los Angeles. Instead, it's just another day in Chicago. I'd be lying if I didn't say I wish I could celebrate a year ahead in California, but I'm so glad my best friend is visiting to make me excited about a city I may have not given a chance to. #totalhonestytuesday #movingishard

So, #totalhonestytuesday, right? A lot of people don't know this, but I joined @weightwatchers back in March of this year. My weight is not something I'm proud of, and I always knew I needed to work on it. I was hoping today would have been "10lbs down!" to mark me actually talking about it but, alas, I'm not quite there. It's hard, I struggle, I get frustrated, but I'm trying. Down 9lbs in 3 months for someone who hates the gym isn't bad, right? It's the longest I've stuck with anything concerning my weight thus far so that has to count for something. #weightlossjourney #weightwatchers #strugglebus #ihatetalkingaboutthis #thankschelsea @faganchelsea

I've been letting my hair grow out for what feels like forever and has really only been a few months and I feel like it's going to always be this incredibly awkward length. Current solution is a hair clip on to of my head pulling all of the weird length bits off my face. Which I think looks ridiculous. I also have been wearing contacts for the first time in years and experimenting with new eye makeup. Basically I barely recognize myself and am absurdly self-conscious about everything lately. #totalhonestytuesday

Y'all #totalhonestytuesday time. It has been a hectic couple days and I had to put myself in check with some reminders. Take things one task at a time. I'm only one person. I have people that can and are helping. Every day is a chance to do great things. I got this. ✌

My anxiety has been really all over the place lately, and my hands take a good chunk of the stress. The state of my cuticles and nails has always been a source of insecurity for me, and I'm trying to get better about it. But for now I'm rocking the oh-so-chic chipped polish, the wounded nail beds, and the elevated heart rate look. Here's hoping for a calmer week next week. #totalhonestytuesday

#totalhonestytuesday – I'm back! 🔥 I don't really like to post pictures of myself, but something made me want to post this one. It's not particularly great (dark dress, shoes, and background) but I'm volunteering with a great organization and I honestly had a great time that night. That, AND @catherinebeard and I partied all night. 💕 bonus honesty edit: I took way too long trying to find the right filter for this. 😕

Share your own honesty next week, and join the conversation.