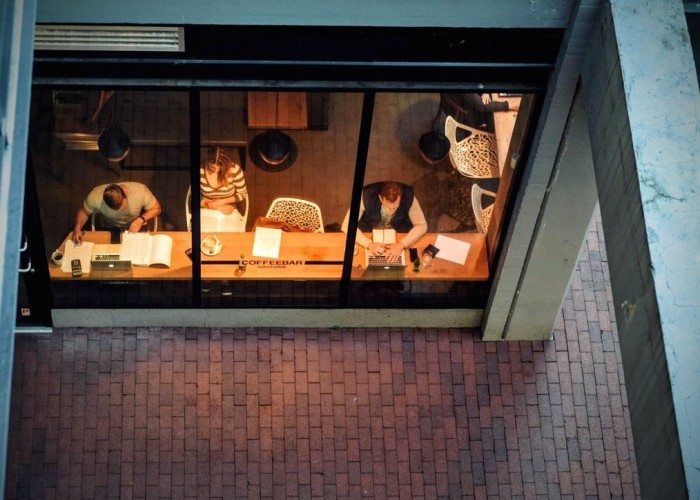 I’ve job hunted a lot in the last two and a half years: when I was waiting tables while everyone else was hopping on the full-time-with-benefits train, when I was employed but unhappy, and when I left my job to freelance and was actively looking for more work. I’ve been very fortunate to be in a comfortable employment rhythm since about April, but I’m still very aware of the fact that we need to be gracious when we’re gainfully employed and other people in our lives aren’t.

Not only is supporting someone through their job search part of being a good friend, but you also never know who you could be applying for a job under in two years. When I was job searching, my non-existent confidence levels weren’t helped by people who were trying to “help,” but were really just being fake. My close friends were very supportive and genuine in their attempts to help, but acquaintances I hardly knew made me feel worthless when they offered assistance. Because of this, I wanted to write a definitive guide to what you should and shouldn’t say to someone who’s job searching. This is based primarily on my own experience, so I admit that it’s definitely subjective. But nonetheless, I think the underlying lesson is that it’s best to be humble and supportive, and to never put another professional down just because you’re doing well.

1. “So… how long have you been looking?”
Generally, asking how long the hellish search has been dragging on for isn’t what you want to lead with when talking to a friend who is unemployed. When you’re asking questions, think about it this way: is this question going to provide productive information that will allow you to help them, or is it going to make them feel bad? If it’s more likely to be the latter, reconsider the question.

What to say instead: Instead of asking about their timeline, ask what types of positions they’re looking for. If you feel like you have the time, and it won’t be seen as belittling, you could even offer to copyedit their resumé or cover letter.

2. “I know someone in a [totally unrelated field]. Do you want me to ask if they’ll meet with you?
This is something I experienced a lot when I (voluntarily) quit my job to go freelance. Yes, it’s true that I was looking for work, but often I felt like people were approaching me to offer a life boat that I had no interest in taking. It felt like they had no faith in my plan because they were pushing backup plans on me when I was still actively pursuing my plan A.

What to say instead: If you have a connection that is actually in the field they’re pursuing, offer to connect them. However, if you have a good connection and don’t want to put your friend in contact, don’t dangle the offer just out of reach. That’s not fair to your friend. If you don’t really understand their field, don’t feel like you need to send them a job posting. Instead, you can keep an eye out for postings and support them in other ways.

3.”How are you going to explain your employment gap in interviews?”
On the one hand, I think every job searcher should know that there’s a good chance they’ll get asked about employment gaps in interviews. However, it might be presumptuous to assume that they aren’t aware of this already. Bringing this up might do more harm than good; it’s just reminding them of yet another stressor they need to keep at the forefront of their mind.

What to say instead: Ask how interviews are going, and offer to do interview prep with them. Before interviews, I used to write out hypothetical questions and answers. When a friend offered to review the questions with me, it was immensely helpful. Doing a “mock interview” with a friend is a great way to prepare.

4. “Are you sure you have enough experience?”
Providing reasons why your friend isn’t getting a job is not helping their morale. Job searching requires a certain amount of realism, which is challenging because entry-level job postings somehow demand five years of experience. However, as a job searcher, they’re allowed to look at likely prospects, and then separately look at prospects that are a little beyond their reach. There’s no rule that says they can’t apply to both.

What to say instead: Ask about their former job experience and discuss what they’re looking for now. Make them feel like they can be open with you and honestly discuss their goals without being judged.

5. “Are you really scared?”
Why would you ask? You know the answer is yes, they’re scared.

What to say instead: Nothing. Skip this question altogether. If they need to talk about their fears, let them be the one to bring it up.

6. “I’m jealous! I wish I could take a break.”
I have been guilty of saying this, and I now realize what an insult it is to tell someone who wishes they were bringing in money that you’re jealous of their free time. Do not assume that they’re in “funemployment” heaven.

What to say instead: If you need to vent about your job, wait for the right time. It’s not that your friend doesn’t want to give you support, but when they’re at a very precarious place in their career, bitching about the fact that your dream job is demanding might be a sore subject.

7. If they just lost their job, be careful about asking things like, “Do you know why you got laid off? Were you the only one?”
You don’t want to place the blame on them, especially because it’s very likely that their layoff was circumstantial. Dealing with layoffs is challenging. We see layoffs as things that “wouldn’t happen to us,” but something I’ve learned the hard way is that more entry-level employees get laid off than you think because often the last person to get hired is the easiest one to get rid of. At one point during my first full-time job, I came close to getting laid off, but I was fortunate enough to get reassigned to a new department instead.

What to say instead: In this case, I would just ask if there’s anything you can do. If it just happened, the best thing you can do is take your friend out for a drink or a meal, offer to pay, and let them talk through the whole situation.

8. “Have you asked your family for help yet?”
It’s not okay to assume that their family has the means to help them out. And even if their family does, it’s possible that your friend would prefer not to take the help. A lot of people deal with extreme pressure from their family to find a prestigious job and build a career. So, if they’ve lost their job or are still looking, bringing up their family might make them feel worse.

What to say instead: If you think if you’re close enough, you can ask whether they’ve discussed their situation with their family. I tend to encourage discussing work-related problems with family simply because I often turn to my family for advice. However, it’s important to realize that not everyone is lucky enough to have that support. If you have a close friend who’s job searching and can’t talk to their family about it, make sure they know you are there for them.

9. Don’t call someone who has a part-time or interim job “unemployed.”
This used to drive me crazy. When I graduated from college, I was working seven days a week, and people still considered me “unemployed” because I didn’t have what they deemed a “real job.”

What to say instead: Realize that their work might be different from your work, but that doesn’t make it less valuable. Ask how their interim or part-time jobs are going.

What to say instead: “I know you can get through this and find a place where you will excel.”