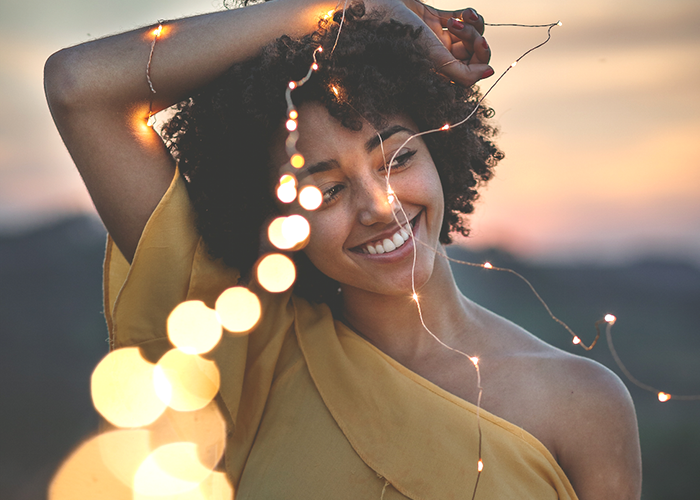 When I was a kid, I would do something that I think was profoundly common: go into my mother’s room when she wasn’t home and try on all her jewelry. Sometimes even her clothes, and occasionally her perfume. (I may have even once decided I was old enough to shave my legs, then proceeded to cut the crap out of my shin with her razor. And then lied about it and said I cut my leg by falling on said razor in the bathtub.) I loved my mom and wanted to be like her, but more than anything, I wanted to be a grownup. Dressing up in her things was my secret — I couldn’t wait to one day have jewelry, makeup, and adult clothes of my own. I assumed turning into a grownup was just a switch you’d flip one day, and I couldn’t wait to get there.

Of course, that didn’t happen immediately when I got to college, or even right after I graduated. I once bought a chic pencil-skirt dress for job interviews, but I never once felt comfortable wearing it (despite it being a bright shade of pink — my color-loving self has never been able to embrace a neutral-forward wardrobe). It took several years before doing anything “adult” felt like more than just pretending. When I started living on my own and paying for myself, I got a little thrill just putting my rent check in the mail. I still get a little nervous whenever someone asks to see my ID, even though I’ve been north of 21 for nearly five years now.

And I’ll be honest, I’m not sure I’ll ever feel comfortable wearing super-tailored “professional” clothes. I’ve accepted that it’s a look that will just never be me, but it’s still the one I most associate with Being An Adult. And because of this association, I’ve bought my fair share of structured shirts and pants that ended up in the Goodwill pile within a year. We were recently away at a financial media conference for TFD, and wearing the blazer I bought for it was the first time I’ve ever felt really at home in professional clothing — and that was because I made sure it was loose enough to be comfortable, and also a nice green color that felt a little more youthful and fun (it was this one in a 30% off sale — bless you J. Crew factory).

I’m sure we all have things we’ve bought to feel more “adult,” but later regretted — so I reached out to the greater TFD community to dive deeper. These were some of the best answers (with names changed to protect the innocent).

1. “Two semi-fancy handbags in college. Now, I’m a person who works from home and teaches Pilates. I’m also not fancy. When I moved to NYC with just two small suitcases I didn’t have space to bring them and so I left them at my parents. Silly.” — Rachel

2. “I almost ordered dorky Christmas cards to send to friends/family with a pic of my boyfriend, my dog, and me on them, but before I placed the order, I realized that I was spending a lot of money to accomplish what a text saying ‘Dec 2017 state of the union: the three of us have survived the year. Merry Christmas’ could accomplish for free.” — Sadie

4. “I got a spiralizer because I decided I would start making zoodles to be chic and low carb, but then I remembered that spiralized vegetables suck and I’ve never even taken the appliance out of the box. And I’ve had it for over a year. Grownups worry about carbs and I really wanted to be one of them but apparently, I am not.” — Gina

5. “In college, I bought myself some nice martini glasses. I always liked cocktails and actually have always enjoyed making them at home, so they weren’t a terrible purchase per se…but then I didn’t bother using any sort of packing material when I moved, and just tried transporting them in a shoebox, and obviously they both shattered in the moving truck.” — James

6. “Any bottle of wine that costs more than $15. I’m not fancy enough for it to make a difference.” — Lindsey

7. “A fuckin subscription to stamps.com…I was writing letters to my friend who moved across the country and thought it would be economical, but then I had WAYYY too many stamps. In retrospect, I could have literally bought a 20 pack of forever stamps and been more than fine.” — Hannah

9. “Silly things I’ve purchased to feel like an adult: a full-size Christmas tree when my partners parents were coming to the city for the holidays, a 4-slice toaster when I had a perfectly good 2-slicer, a dining room table that holds all of our junk because we eat the coffee table…basically just larger versions of the apartment sized things I already owned.” — Amanda

10. “I kept reading about how cost-effective it is to keep cocktail essentials at home, so I bought a super cute bar cart from Target. But I pretty much fall into the habit of buying one type of alcohol and not getting another bottle until I’ve finished that one. So the cart is pretty empty.” — Alyssa

12. “Glassware…I bought beer boots, stemware, etc. the second I moved out of the house. I use them, but I didn’t ‘need’ them.” — Billie

13. “A few years ago, I randomly decided it was a good idea to walk into that fancy store Blue Mercury to buy myself a few items. It was the first year working at my first post-grad ‘big girl’ job and I was drunk on the power of finally having some excess money to spend. I felt like this was surely the “adult” way to spend my money — on fancy skincare products, lotions, and candles that cost $$$, but things I hadn’t even done an ounce of research on. Now that I’m older, I would never think of spending my hard-earned money on an overpriced night serum unless I knew it was actually worth it and made a difference on my skin.” — Lola

14. “A New Yorker subscription. I like reading, so it made sense. But I would try to get through an entire issue before starting the next one, and I’d almost never finish it before the next one arrived. So, of course, they started piling up, and I eventually canceled it and just tossed them all…” — Paul

15. “I was about to say nothing but then I remembered the alcohol infuser I bought last year to make fancy drinks at home. I way overdid it with some tequila and peppercorns, to the point where it was undrinkable. I’ve had a few more successful tries since then, but they’ve been infrequent. I also think you don’t really need a fancy infuser to upgrade your liquors, it just feels more adult to have one.” — Danielle

17. “I bought a $300 handbag that I now never use because I’m too afraid of damaging it or wearing it out.” — Vanessa

18. “One of this STUPID Erin Condren life planners AT THE START OF THIS YEAR. I SPENT A HUNDRED DOLLARS ON BOUGIE SPIRAL BOUND NOTEBOOK AND STICKERS THAT HAD CALENDAR PAGES.” — Ella