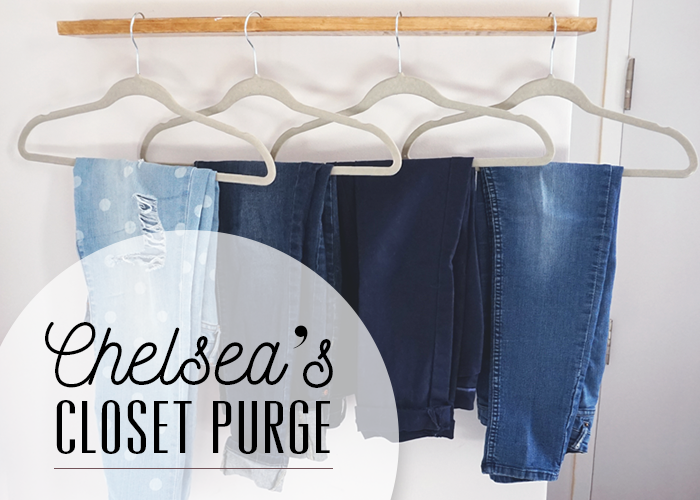 Spring cleaning is upon us (relatively soon), and as someone who has recently increased her living space by about twice the square footage, if I’m not on top of my shit, things get messy very quickly. I have several corners in my apartment which are home to piles of things that need a home, and since they are out of my general field of vision/walking routes, I can essentially ignore them as long as I want. With two floors and big rooms, I can accumulate endless crap I don’t need, and don’t have to worry about cutting things down or taking a close look at what I do and don’t need (as I always used to).

So to that end, I’ve been starting my personal spring cleaning early, cleaning out various rooms and doing some home improvements I’ve been putting off since our move-in last fall. I still have about four cluttered areas to tackle, but the bedroom is mostly done now, and a huge part of that was a wardrobe purge.

Like many of us, I tend to hold onto clothes that have no business in my closet way past their expiration date. And whether it’s because the item needs to be thrown in the garbage from sheer deterioration, or because it was just never a good look for me and never gets worn, I need to be much more harsh about my decluttering. Most of us have about 40% of our wardrobe that gets worn with regularity, and the rest could probably go, if we were being honest. And having gone through my stuff and donated/friend-gave/tossed a lot — even though it’s only been six months since my last move! — I already feel lighter, my room is cleaner, and I am finally able to do the aesthetic improvements I was putting off when things were more cluttered. (The wall this was photographed on will soon be this charcoal color, and the closet door will have a Lauren handpainted quote on it! Will do a before & after post here, of course.)

So, with all that said, here are the 26 things I ditched and why, to hopefully inspire an equally fruitful and satisfying closet purge in your own home. 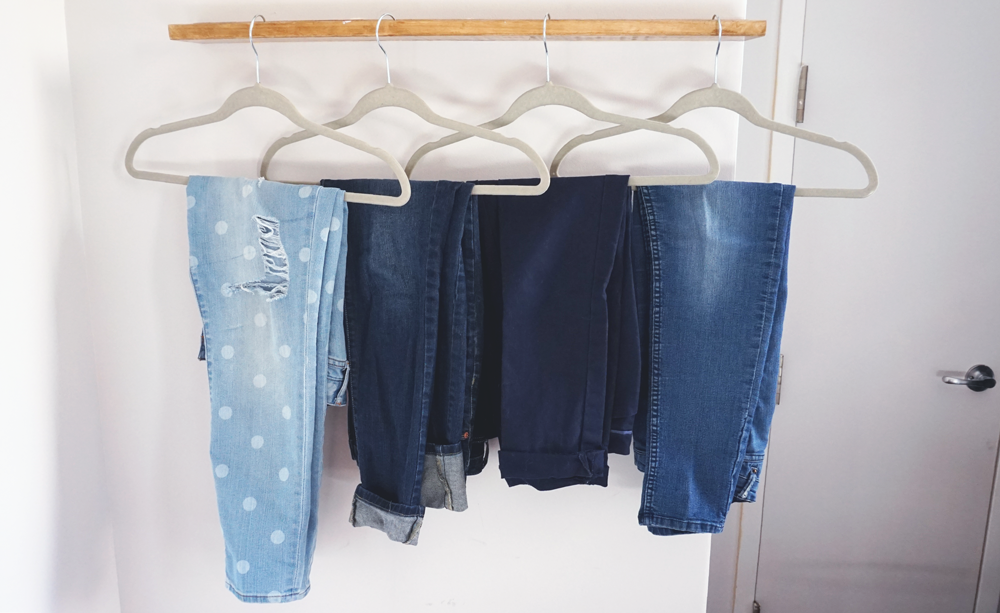 As some of you know, I lost a decent amount of weight this year, taking me from an 8-10 to a 4-6. This means that most of my jeans don’t fit me anymore, and beyond that, several of them weren’t really wearable in the first place. (The pair on the far right had huge thigh disintegration, the one next to it literally never fit, and the pair on the left — even though I love the polka dots! — were the bane of Marc’s existence.) So all of them had to go, and though I now only have two pairs of functional blue jeans (and two pairs of white), I actually get serious and sustained use out of them. 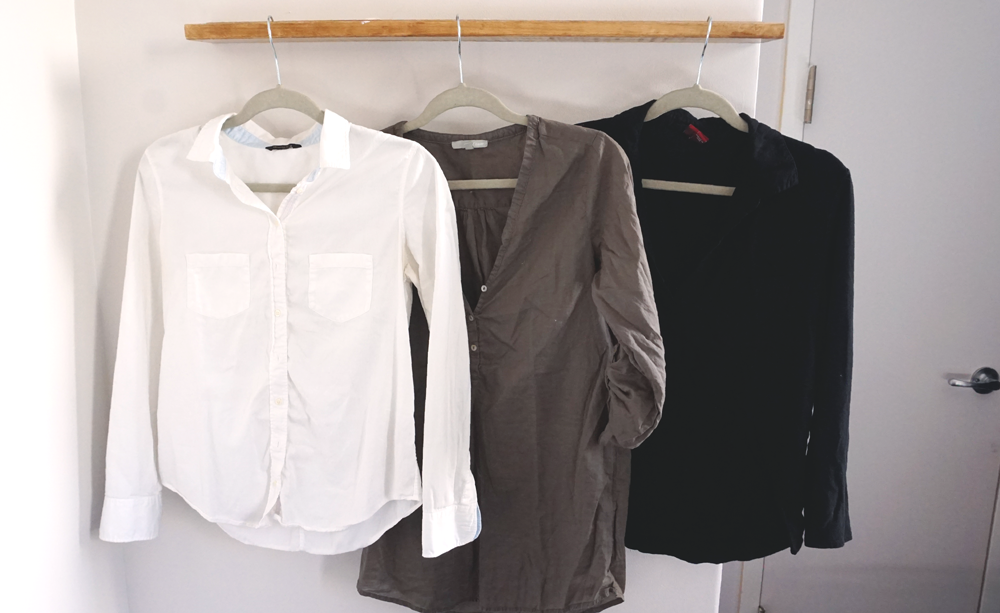 That white shirt has significant underarm yellowing. The green one has a huge hole on the back. The black one has a bleach stain. (And this breaks my heart because they are all versatile, neutral tops, and that white shirt is the most perfect white shirt I’ve ever had.) It was time to throw them away, and while I know that yellowing can be fixed, I’ve treated it so many times that the whole shirt is visibly dingy and threadbare. The truth is that, if I really like something, I will hold onto it forever, which leads to me wearing a shirt with visible bleach stains out and about, or cleaning something until only threads remain. My lesson from this is clear: if you really love a basic/everyday top that you will wear a lot, buy several. In the best cases, a heavily-worn shirt will only last a few years. And you’ll wish you had a replacement. 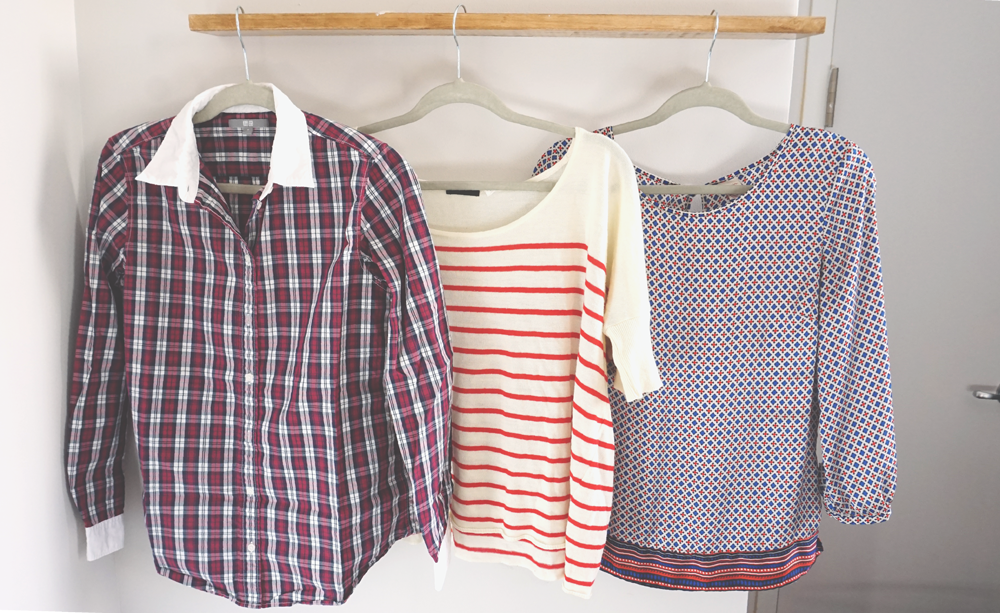 The first one is a Uniqlo top I bought when I went to check out the Inès de la Fressange collection, liked this shirt, saw they didn’t even have anything close to my size, and bought the large because it would be “boyfriend-y.” It makes me look like I’m parasailing every time there is a gust of wind. No.

The second top is made of a very unpleasant material (it’s a summer cut but made of wool??? why???), and absolutely does not fit me, but I loved what I perceived to be the chic Jean Seberg-ness of it, and it was a couple bucks at a thrift store, so I bought. The couple times I’ve worn it, I spent sweating and itching, and tugging at the sleeves to get it to sit right. No.

The third top is a silky blouse and I love it, but it sits at the absolute wrong place on my waist, and makes me look boxy and bigger than I am. (And it’s got an intricate hem, so getting it tailored would be a huge hassle.) No. 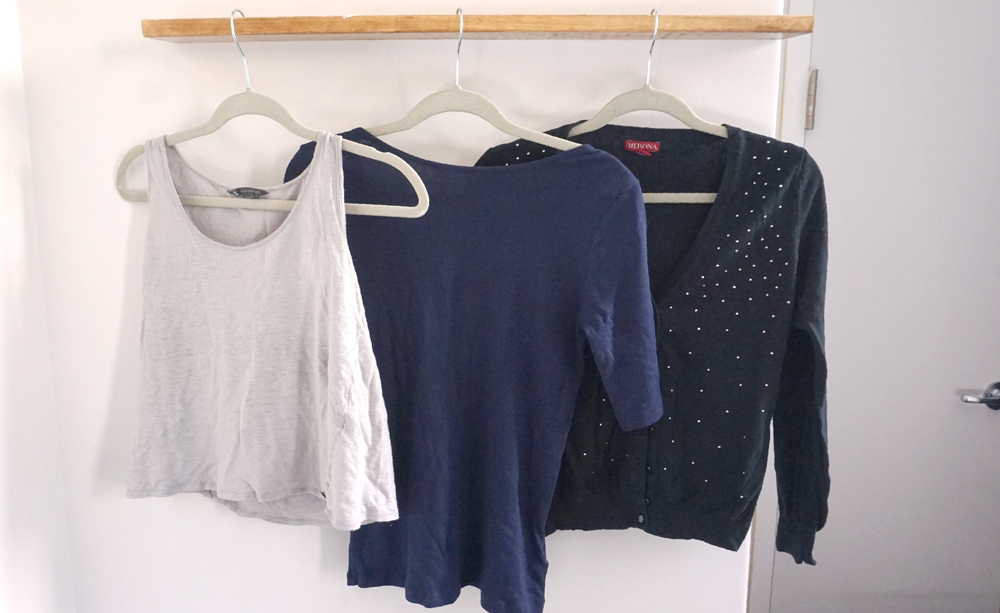 These bad boys have been through a washer so many times that their respective textures can only be described as “kill meeeee.” They have served their duty, and been so significantly faded and stretched by wear and washing that it is time to let them retire with dignity. Goodbye, basic tops, you served me well. 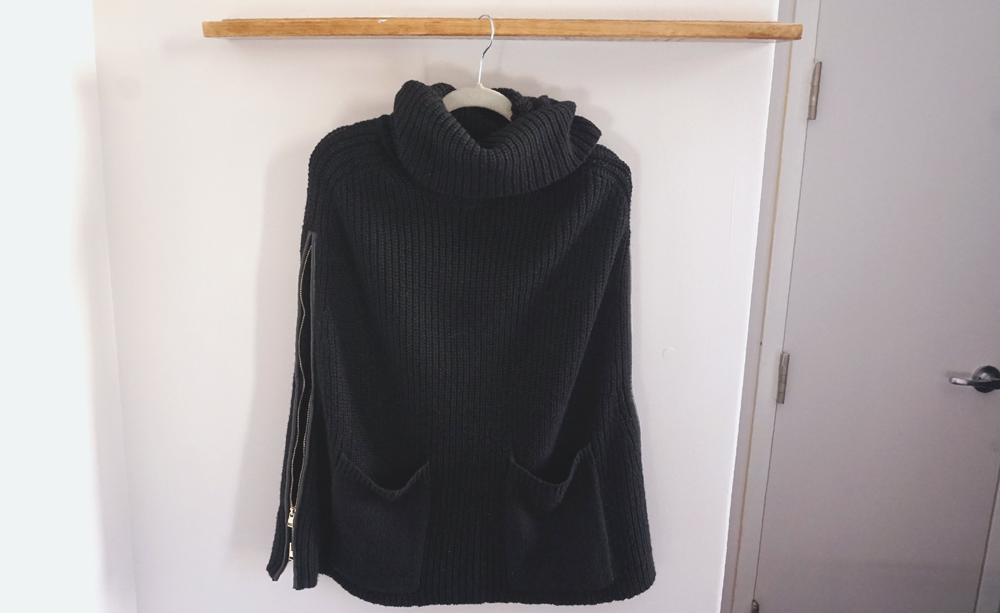 This is a zipper-sleeved, pocketed, ribbed turtleneck sweater cape. I don’t know in what context I imagined myself wearing this, but considering it’s impossible to have on under any kind of coat, the circumstances that have to collide for this to be an option are just too precise to wait for. I do like it, in its way, and the two times I was able to wear it out I did receive compliments, but this is just not adapted to my lifestyle — which is the life of a normal person who can’t wear a zipper-sleeved, pocketed, ribbed turtleneck sweater cape.

The collateral damage of weight loss. 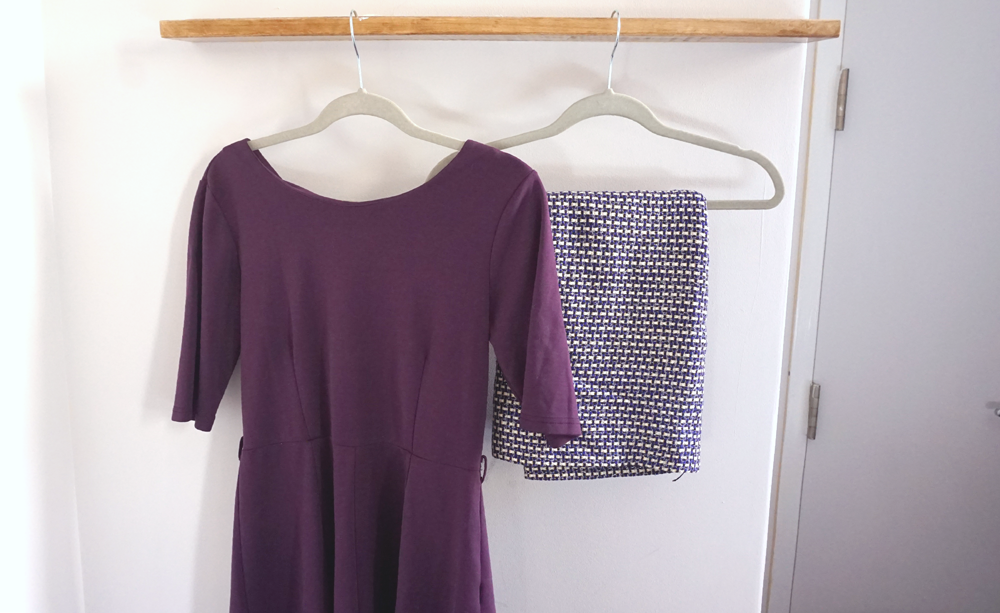 Tale as old as time: I loved these, lost weight, they now look ridiculous on me, and they don’t quite make the cut to get tailored. I’ve learned in this whole process (weight loss, wardrobe purging, etc) that tailoring is of such huge importance, but really forces you to decide what is and isn’t worth the expense and the effort. And while I love these items, they would be better in the closet of someone who can actually wear them as they are, instead of me spending essentially half to two-thirds of the cost of the item to have them totally redone. 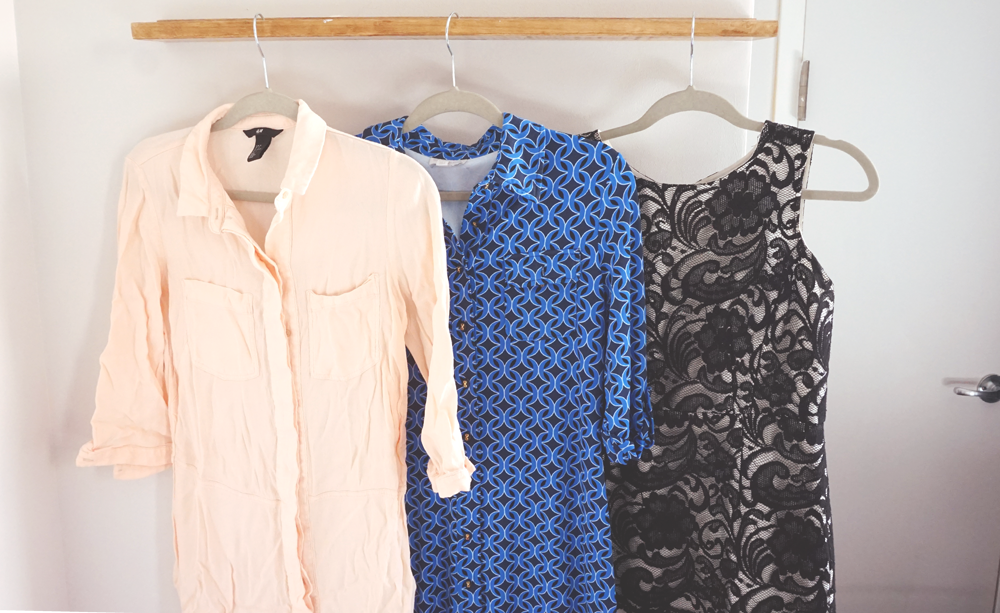 These are the dresses which, in another circumstance, I wouldn’t want to have given up, but which I had to be realistic about. (And actually, that dress on the right — which has some lovely detail towards the bottom not pictured here — I ultimately decided to keep after this, because it’s just so nice and quality, and is worth the tailoring to me.) But the other two had to go.

The one on the left was once my favorite easy, neutral summer dress. It was a beige shirt dress that looked absolutely perfect with a thin brown belt. But alas, our old cleaners turned it a horrifying shade of bubblegum peach during a wash-and-fold, and now it makes me look like an utter clown. Rest in peace, sweet prince.

The middle dress is one I have two of, in two different patterns. I wear the other one — a navy and white pattern — very frequently and love it. But this one, despite being the same great cut with the nice little patterned belt that came with it, just isn’t my color. I always wore the other one, and told myself that I’d wear this one, but never did. Someone else with a different complexion will do this dress justice, and in the meantime, I’ll enjoy its fraternal twin. 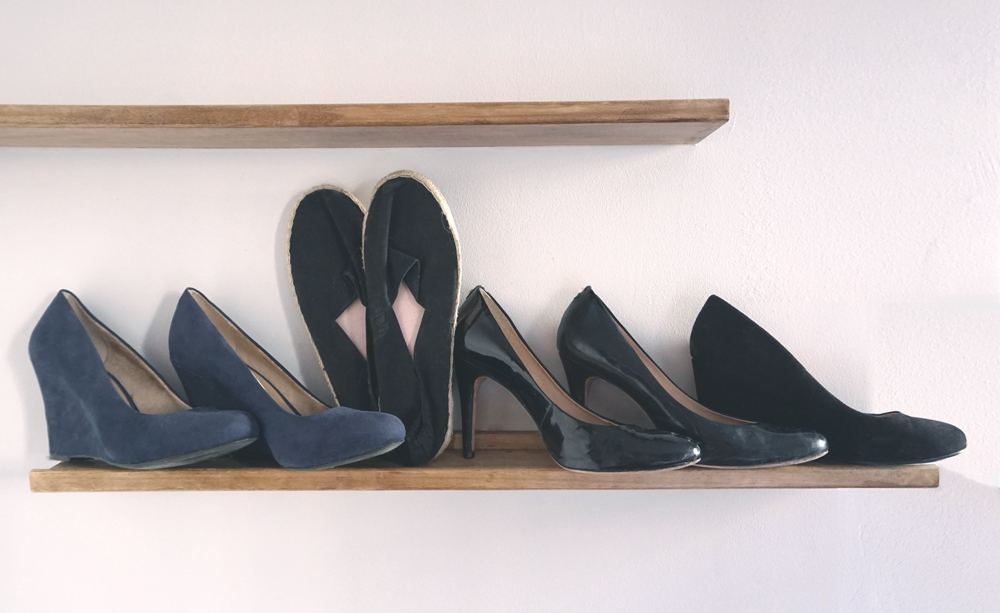 That shoe on the right is a formerly-beloved black wedge whose mate I lost at a hotel when I went to a wedding last fall. I kept the one shoe in a weird, unspoken delusion that somehow the other one would manifest back in my life if I kept this one around. That was crazy, I am crazy, and now I have thrown away that shoe.

The blue wedges literally never fit me, the black pumps make me feel like I’m going to a middle school dance (and also are incredibly uncomfortable to wear), and the black espadrilles, well… I am not an espadrille person, and they make me look like I have flippers. These are Chelsea’s delusional shoes, and I’m glad to say they are no more. 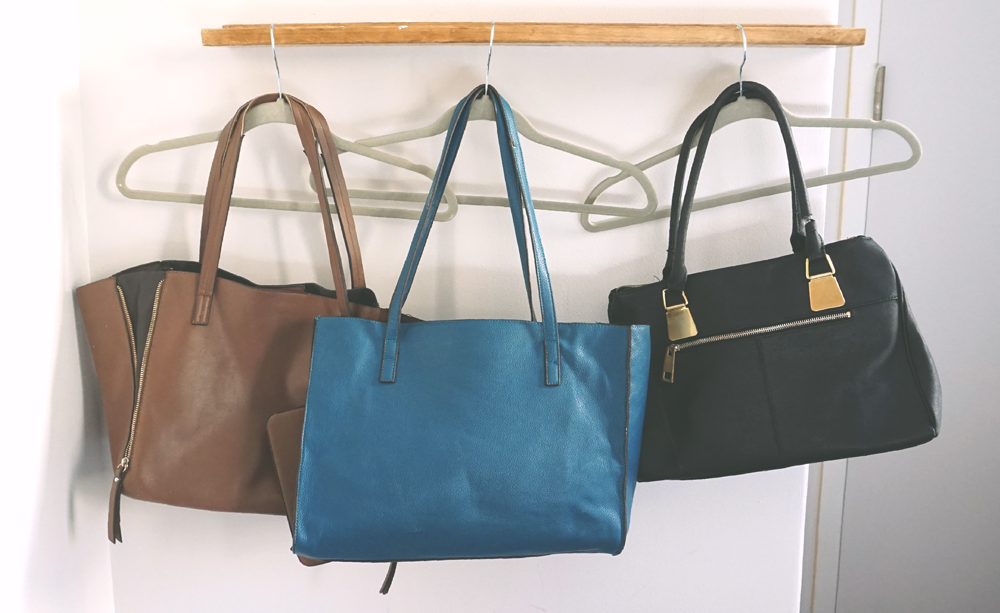 I love the purses on the left and right, but they are broken and have been deteriorating actively for like, at least a year now. The straps on the one on the left are genuinely hilariously eroded, and yet my dumb ass was still bringing this thing into meetings and other professional engagements. The one on the right is coming apart at essentially every seam, but I was incapable of admitting defeat. Now I have forced myself to accept their departure from my wardrobe, but it took some serious effort. The blue one is fine, I just literally never wore it because, like that dress, it’s not my color. Why do I buy bright blue things when I know that I never wear them in practice? I don’t know. We all have our vices, and I suppose one of mine is harshly-colored things that simply look ridiculous against my skin, but which I love in theory.

My big takeaways? Practice #NeutralLife, invest in quality, buy what actually fits, and get multiples when something is very good. Oh, and don’t hoard things you don’t wear for years because you think you’ll eventually wear it, and feel guilty for not doing so. You won’t wear it, and if you don’t admit that now, you’ll spend the next however many years carting around half a closet’s worth of things you know you’ll never touch. Give those things to a loving home, and if you need to, you can tell yourself that that dress or bag isn’t dead — it’s at some clothes farm, where it can run free and play with the other clothes and enjoy the fresh air. It’s better this way. 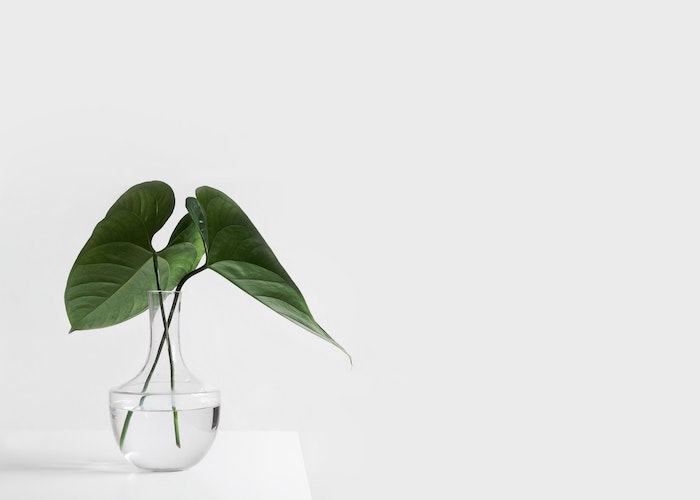 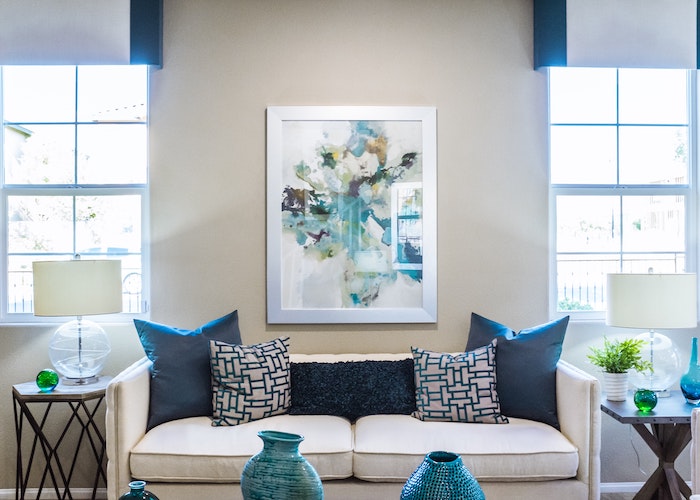