4 Items In My Wardrobe I Spend Big On, & 4 Items I Never Will 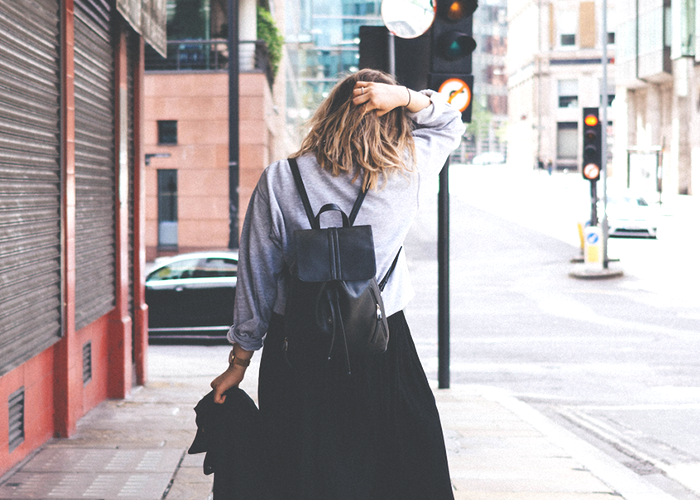 A few years ago, I forced myself to develop an interest in fashion. I no longer felt like the “I couldn’t care less about this” vibe I was trying to cultivate was actually earning me respect — and looking cheap and messy just made me feel worse about myself. It was time to start at least defining what I wanted out of fashion, and accepting that there would be some things I had to spend more money on.
I make decent money, but I’ll never be able to simply buy the highest-quality stuff without a second thought. And, in fact, in the last two years, there have been a few things I’ve decided that I still can’t justify spending big money on — even when I can.
I’ve outlined below the four items in my closet that I actually spend the most money on and I think are worth it — and I’ve added a few that I will likely never spend a lot of money on, and sometimes even avoid.
What I will always invest in:
1. Ankle boots
I find ankle boots tie almost any look together, and it’s easy to find faux-leather or suede ankle boots that look like their high-end counterparts at outlets like Forever21. But I managed to find a pair that wasn’t too outrageous — about $150 CAD — of high-quality vegan “leather” that offered a heel with more structural integrity, a stronger sole and added room inside to add gel inserts. Because ankle boots are good for all seasons, I’d always recommend spending a little more so that they can simply hold themselves together longer.

2. Plain, solid dresses
Dresses have become the savior of my late 20s. They take away the problem of matching. The dresses in my closet that have lasted five years or more are usually the plainer dresses without trendy patterns or cuts and, yes, the ones that I’ve spent a bit more cash on. Dresses are not something you want to mess around with — a T-shirt that gets warped in the wash can be tucked into pants, pants that shrink can be cuffed into capris, but a dress doesn’t have much to hide behind. Invest in a dress that gives a timeless and classic look, and you’ll thank yourself in five years when you’re wearing a dressed-up version of it to a cocktail party.
3. Long-sleeved blouses
This may all come down to my particular taste since this is the one item that gives my body the most trouble. I have a fairly small frame with broader shoulders and longer arms, meaning anything meant to stretch across my shoulders holds a lot of potential to create discomfort. A long-sleeved blouse that doesn’t quite reach your wrists can easily run your look and make you look more like a gangly teenager than a cool professional (neatly rolled sleeves can create a good cover-up if you can’t afford the right blouse right away). Anything that tugs at the shoulders can also cause a lot of visible discomfort, and getting dressed shouldn’t make you feel like shit.
4. Underwear
Yes, the one item that no one can see is the one I will not go cheap on. I don’t exactly spend $100 on a date-night bikini bottom or on my casual boy shorts, but after years of settling for Pink’s “5 for $35” bin deals, I’ve decided that the comfort of my butt is something I can’t ignore. When underwear doesn’t fit right, you feel that crap all day. And wouldn’t it be nice to not have to buy underwear several times a year? Invest in a pair that you know fits your butt right, and stick to that style — oh, and take the washing instructions seriously. Trust me.
What I won’t spend big on:
1. Jeans
I used to work at a denim retailer in high school, and I never thought I’d advocate for buying house brand jeans, but I have concluded recently that there is no reason to spend more than $100 on a pair of jeans. I’m not saying we should go out and grab the $20 fast fashion pairs that were made to fall apart after the first wash, but a number of stores such as Uniqlo, Target and even Old Navy (I will never speak ill of the Rock Star jeans) carry pairs that are as durable as they are affordable. When going cheaper with jeans, go for a pair of classic dark blue with a slim or skinny fit, to avoid awkward twisting and fading.

2. Anything white
I’ve always been particularly inspired by Michael Kors’ soft and solid whites, which do look instantly sophisticated. The problem is, as long as I’m a sweating human being subject to the same laws of gravity as everyone else, it just won’t work. Last year, I bought a couple higher-end white blouses with the hopes of achieving that sophisticated look. A year later, when comparing the armpit stains and general washing machine discoloration side-by-side, there truly is no difference between cheap and high-end to me (at least, when it comes to color preservation). If you’re going to go expensive for tops, I recommend an off-white or rosy color.
3. Jewelry
Aside from my wedding ring and a single necklace, I rarely wear jewelry, and maybe it’s me, but I’ve never actually noticed jewelry on anyone else. While I’m not strictly against spending money on jewelry, I also think spending a ton of money also won’t automatically make it look good. If jewelry looks tacky to you, a high price tag won’t make it look any less tacky. My one exception is any type of piercing jewelry if you have metal allergies. Other than that, stick with your gut.
4. Transition-season jackets
When you live in a city that doesn’t always have predictable weather, the concept of having a “spring jacket” or “fall jacket” can seem like an absurd luxury. There are wet-weather jackets, light-snow jackets, just-kind-of-cold jackets and my personal favorite, “I can’t handle this with just a bomber but I will fucking die if I put my parka on” jackets. I’ve tried to cut down on the absurd number of jackets for the in-between-seasons, but I’ve never been able to reduce the number any lower than three (one being waterproof), so as a result, I will go for a cheaper find with these jackets. For what it’s worth, because these jackets aren’t subject to the gravest of conditions, they’ve still given me a few good years each.
Bree Rody-Mantha is a business journalist and dance teacher living in Toronto. In her spare time, she enjoys sport climbing, lifting and running the vegan food blog, Urban Garlic. Follow her on Twitter here.