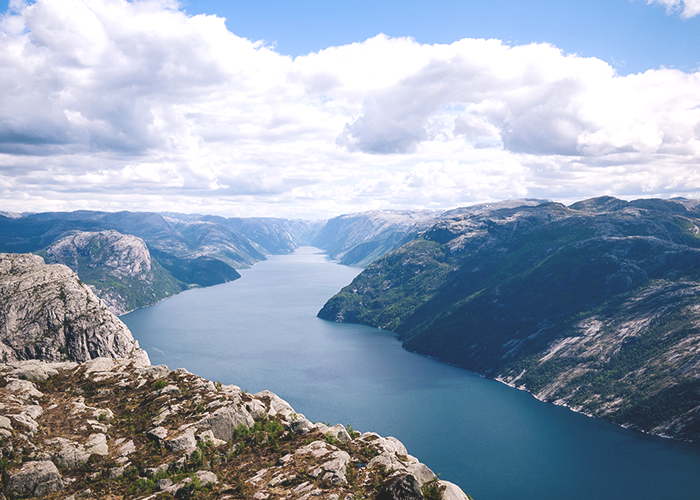 Purchasing plane tickets is my hubris. I’ve said this before, and my addiction to a flight confirmation page came into play when I booked a ticket for a week in Norway… a month and a half before my departure date.

Usually when I embark on international trips, I give myself a solid 4-6 months to save up for it. This time, not so. But, I mean, the ticket was $369 roundtrip out of Boston… how could I not purchase it? (Don’t answer that…)

My current income consists of a stipend from my full-time Americorps job and an additional part-time job at a music venue (because Americorps basically pays you in loose change). Though my plane ticket there was inexpensive for a transatlantic flight (yes, yes, I will have Death Cab’s “Transatlanticism” on my flying playlist, this is a given), after adding in accommodations, train tickets, a car rental, and spending money, the trip is going to cost well over $1,000.

I barely make that much in a month from my two jobs.

So this means some hustling is in order.

After overworking myself to actual sickness that landed me in the ER and on a bucketload of antibiotics last fall (a week before my birthday, which sadly meant no birthday margaritas for me), I’m all about work-life balance, doing my best to give my body the rest it needs to manage two jobs and attempts at a social life. I had been working 50+ hour weeks, while also setting my alarm for 5 AM every morning so I could write and work on my blog. Sustainable? Clearly not.

However, some seasons in life do call for hustle — not long-term overexertion, but a short burst of “okay let’s do this” work. This month is that for me, because mama’s gotta pay for her impromptu (and arguably impulsive) trip to Norway. (But, again, $369 outta Boston! Roundtrip! Unreal!)

Seeing that $1,000+ trip total sends my mind into a frenzy akin to that episode of SpongeBob where little SpongeBob minions run frantically through his brain, so to ease my own rising panic, I broke down the trip costs into manageable chunks. I then determined which job would cover which expense. Being able to assign an income to each smaller expense is like a mind game — the good kind — allowing me to feel like I can conquer this big ‘ole $1,400 price tag after all.

Disclaimer: Already I had $250 in savings specifically earmarked for travel, which covered part of my plane ticket, so I didn’t purchase the ticket without first knowing I would have money to pay my credit card in full when the bill arrived. I may be impulsive at times, but I’m not that impulsive. On the list of Things That Are Not Cool: debt.

Here’s how I broke down my expenses:

Below are five ways I’m hustling to earn extra income for my Norway adventure (guys, Google that place… FJORDS GALORE. You’d buy the ticket too!):

My part-time job doesn’t pay that much, just $10 an hour, but it’s a job I like and I often have opportunities for additional shifts. Usually I only work weekends (see above: giving my body the sleep it needs to function properly), but when an evening shift became available on a weekday, I sucked it up, drank coffee, and took the shift after my day job was over. DOING THIS FOR YOU, NORWAY BB.

I love me a good cuddle from a fluffernutter, so re-enter stage left from my high school and college days: the pet-sitting gig. My friend’s roommate had found success from Rover.com, so I signed up, paid the $10 background check fee, and within about a week, received my first client. The downside: Rover.com took out $35 from the client’s fee, so I’m left with only $140 for the week instead of the $175 that the client is being charged for my services. Womp womp. Since booking that first client a couple of weeks ago (the job isn’t until June), I’ve had one more inquiry, but have yet to receive any additional clients. Since I’m fairly new to Rover, I’m not quite sure how I can improve my search rankings to increase my opportunities; maybe more will come after I complete that initial job in June.

I have an additional dog-sitting gig over Memorial Day weekend, giving me another $150 in cash monaaay, but this came through a co-worker rather than Rover.com, so no fee is being taken from this one. Word of mouth for the win!

I’m also not above sending out a Facebook plea for pet-sitting gigs. While there has been a lot of interest in my offer, we’ll see if see there is actually any serious ROI on my “Hey, let me pet-sit for you plz & thx” (written in more eloquent language, of course) status.

This is another job that came through word of mouth — a manager from my part-time job recommended me for the role of PA for a show, bringing along with it a $150 show rate. Would I be interested? they asked. Why yes, yes I would, thank you.

And here I present to you the twice yearly joy of the monthly budget: when you get paid every two weeks and you create your budget for each month based around those two paychecks from the month prior, there comes a time every six months where — SURPRISE — you get paid an entire additional paycheck that month! Three paychecks for a budget that only needs two. WOW. Feelin’ rich here! (Lol plz don’t do the math at how much Americorps pays me hourly.)

It just so happens that June is a three-paycheck month, and blessed that it came when it did, because Norway budget needs that money, tusen takk.

Can I praise the miracle that is credit card points enough? Answer: no. Credit card points were basically the lifeblood of my recent trip to London. One of my credit cards, the Barclay Arrival Card, allows me to redeem my points for any travel-related purchase. So I put 7,500 of my points — $75 worth — toward my Airbnb.

My other credit card, the Chase Sapphire Preferred, allows me to transfer points to a variety of airlines, including Southwest. I used some of those points to cover my flight to Boston ($72), and I only had to pay a $5.60 booking, which I just deducted from my monthly budget to cover. In all, my credit card points paid for $147 of the trip. ‘AYO.

If you don’t already own one and love to travel like me (and are financially responsible and not apt to go deeply into debt), I highly recommend owning a travel credit card!

I’m still about $100 short of my travel budget for my weekly expenses while there, but I’m confident I’ll be able to drum up that money somehow. Though I wouldn’t recommend booking a big trip like this without money already saved up prior (lesson learned, self), I’ve also learned that it is entirely possible to earn money quickly when the need arises; all it takes is some creativity and a little bit of hustle.