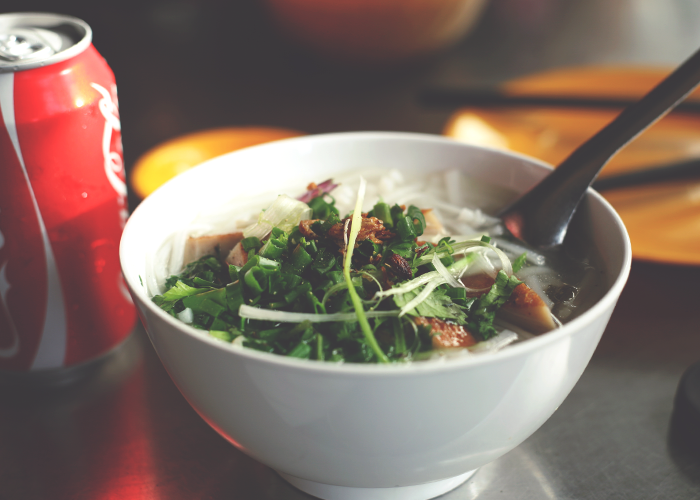 When I first moved to New York, about two and a half years ago, there was one thing I was most excited about for my new city life: takeout. And not just takeout, but food delivery. I’d heard about the famed Seamless on many a city-based podcast, a website and app that allows you to order food from pretty much anywhere in your area and have it delivered to you within an hour. This fabled instant gratification for the lazy was what I pictured “adult life” to be like: having your meals delivered to you on the regular because you are too busy being fabulous and independent to figure out how to make them for yourself.

With that mindset, I racked up quite the credit card bill my first month in the city, with almost $300 going to Seamless alone. Once I realized where all of my money was going — after the initial “Where did all my money go??” moment of panic due to never checking my statements — I decided to cut out ordering in, cold turkey, by deleting the Seamless app on my phone.

That didn’t last, of course. When you’re wine-tipsy, re-downloading an app is just one small step to getting you the only thing you want in the whole world, which in that moment is pineapple fried rice and scallion pancakes. So, I would go through the same thing every month or so: delete Seamless until I really “needed” it, then re-download it and regret it in the morning (but not regret the greasy food that definitely prevented a worse hangover), or at dinnertime when I realized I really should have just saved half that meal I ordered for lunch.

It’s not that ordering food every once in awhile is all that bad for my wallet, but the costs add up. Especially with websites like GrubHub and Seamless, even if there’s no delivery fee, you still have to add a tip (or be an asshole), and often you have to meet a delivery minimum. So even if the Pad Thai lunch special I’m ordering costs just $6.99, I still have to make my order add up to at least $10 in order to get delivery, so I decide what the hell, I’ll just get an order of dumplings, too.

I haven’t been nearly as bad about ordering food as I was in that first month in the big city, but I’ve also never paid much attention to how often I’m ordering. This morning, I logged into my Seamless account and totaled up all the orders I’ve had delivered this year. I regret to inform you that, so far in 2016, I have spent $418.01 on ordering food alone. Some of these orders perhaps included a boyfriend or roommate’s noodle dish, but for the most part, they were just me. And when I consider that I’ve “only” tallied 20 orders from Seamless in 2016, each meal I ordered came out to over $20 on average.

I’m not going to delude myself with the idea that I would have put that money towards my retirement, if only I’d had some foresight. The returns on $400 compounded over the next few decades would, of course, be nothing to turn my nose up at, but until recently, I never would have thought about that particular hypothetical. Instead, I’d rather think about the other things I could have put that money towards that would have improved my life — things that bring me a lot more joy or improve my standard of living much more than mediocre enchiladas, whose only perk is not having to leave my apartment to eat them.

I’m very close with my family and feel my best when I get to see them often. My immediate family lives in Atlanta, which is a very easy flight from NYC. The total I spent on ordering food this year would easily cover the cost of one ticket to and from home, and with enough planning, it would have even covered a ticket for my boyfriend, too.

I never buy flowers when I go grocery shopping because they always seem like an unnecessary expense. However, I always appreciate being around them (even moreso now that I’m regularly in the TFD office, tbh), and the grocery near me has pretty stellar options in the $10 bouquet bin. They would have really brightened my apartment on the dreary NYC winter days at the start of the year.

in the city can run pretty steep, so a session of a few hours would be about $100. Still, that means I could have gotten even the areas I never pay attention to (hello, baseboards) in sparkling shape four times since last January with the money I lost to Seamless.

If you live in New York and don’t yet have an ID NYC, I highly recommend making an appointment right now. There are tons of benefits available to you by getting one (which is totally free!), one of which being discount movie tickets. You generally have to buy them in bulk, but when you go to the movies as often as I do — it’s my whole family’s favorite past-time — it’s totally worth it. AMC or Regal tickets come out to about $11 each after the discount and added fees, which is much better than the typical $15-20 range you’ll generally spend on one evening movie ticket in New York.

I only ever get a haircut once every three months or so because knowingly spending $55-60 at one time gives me some anxiety (of course, I just *expect* to spend this much at a restaurant in New York…). I would much rather go every six weeks to keep my hair as healthy as possible, and if I’d had this extra cash in my account, that would have been pretty easy to do.

There are tons of things I could have spent with an extra $400 this year, of course. And I don’t want to let myself get into a shame spiral about my ordering habits — sometimes these were on really bad days, and food delivery was a fun thing to share with my roommates and get over something. Other times were particularly busy days, and ordering food meant I was able to be a lot more productive, so it was maybe even “worth it” financially. Still, it’s sobering to add up everything I’ve spent just to pay for this one (often rather silly) convenience.