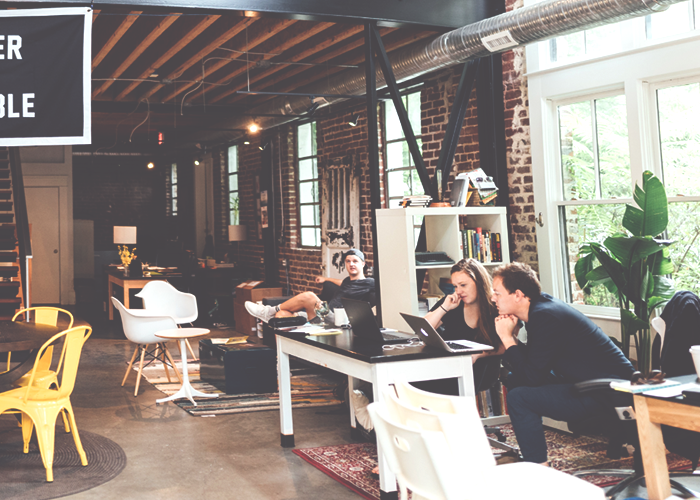 Work — whether it’s a 9-to-5 admin job or an hourly barista gig — is full of left turns, curve balls, crunch periods, and difficult deadlines. No matter which profession you’re toiling in, regular seismic activity is a given: bosses demand higher turnouts and turnarounds, clients wreak havoc and not-so-righteous wrath upon managers, and employees often fan the flames of workplace politics and or make manipulative appeals to the managerial pecking order. It’s easy to get sucked into the rat-race mentality and treat cooperation like a scarce resource: if I spend more energy getting along with you, then I won’t get along as well with our boss so I can get ahead. And sometimes — as with most of life’s ironic, unpleasant, but important lessons — the best way to spring yourself free from this mentality is to face off with that coworker who’s become a slave to his competitive impulses and insecurities and is spoiling for a fight…with you.

At least, that’s what I’ve found. I’ve had an aggressive, domineering male peer systematically try to pull rank over me (by which I mean, he dog-piled onto gender biases of the managers and attempted to act as my overseer when we were hired for the same level of work). And man, oh man (THE PATRIARCHY), it took serious patience to hold my tongue and maintain a professional attitude. It took even more courage to hold my ground and advocate for equal work opportunities while this coworker continued his attempts to push me down and control me.

I haven’t had much direct, professional competition with female coworkers; I feel very proud and lucky to report that the overwhelming majority of the women I’ve worked with have been active advocates for my education and advancement. While working in publishing, a handful of women in the office did direct passive-aggressive, socially-meddling comments my way, and either delivered misleading information on office protocol (“No one send those sort of emails to Editor X”), or silently declined to forward my pitches and proposals along to their head editors without telling me. Their calculated nature of their remarks and (in)actions stung; each instance was so small that I was faced with the choice of A) Nursing a bitter grudge-nugget (a nugget made of grudges, best enjoyed as a cold dish with a side of fist-shaking), or B) Taking note of their manipulative behavior to protect myself from further deception and quietly taking steps to avoid working directly with them. I chose the latter, moved on with my professional pursuits, and learned that my energy was best spent on my job, not grudge-nuggets consumption (FYI: they taste like sawdust without the fist-shaking sauce).

Here are a few other professionals who learned how to take the High Road because a coworker took the Low Road.

1. “My first ‘real’ job involved working with a total misogynist. He was my boss’s boss, so there was nothing I could do; every day he made little comments and gave me inappropriate looks and just emitted a general disgusting-ness. It made me dread coming into the office. But what made it really terrible was when I chatted to my female colleague about him on the company chat program (this is an absolutely idiotic move, I know, but I was so angry at the time it didn’t even dawn on me how dumb it was), and she 100% disagreed. She basically painted me as this hyper-sensitive, hyper-prudish woman, and painted herself as the cool one who could ‘hang with the guys.’ I felt like an idiot, and immediately tried to play it off. Two weeks later, I got called into that very same boss’s boss office to be fired. She had shown him the chat logs. I wanted to set her hair on fire.” — Brianna

2. “As I became the lead carpenter at my last job, my older coworkwer and I grew increasingly at odds. He was terrible at his job, and I resented him for it. He resented me because I was younger, in charge, and openly frustrated with his work. In the company’s final days, I found myself absorbing more and more of his work load. It might not be inspirational, but the truth is that sometimes you just have to keep moving, stop trying to “fix” people, and pick up their slack so you can focus on the overall company’s work. It was eye-opening for me as a manager, and cured me of the naive idea that anybody can change their attitude and become an asset if they’re given attention and a second chance.” — Craig F.

3. “I had the classic frenemy situation at my old job. I was hired at the exact same time as another woman for an equivalent position; looking back, it seems like they were trying to get us to compete with one another from the get-go. (It was like that time in Mad Men when they divided the client list between Pete and Kenny to see who would ‘distinguish themselves.’) We built up this animosity over our first year together, always competing for the attention of our boss and always trying to one-up each other. It got to the point where I was staying in the office til 11 PM frequently, just to be the last one to leave. I lost 15 pounds from barely ever stopping to eat. It was just unhealthy. So, when I found out that she got invited to dinner at our boss’s house and I didn’t, I absolutely lost it. I literally started crying at my desk and I said something really nasty to her on the way to the bathroom (basically, I called her fat; something I’m really, really not proud of). I gave my notice of resignation a few days later and sent a long letter of apology to her for how I’d behaved over that year — it wasn’t that I didn’t like her, it was that I was put in a situation that made her my natural enemy. I wouldn’t call us friends now, but we’ve met for a drink before and had a perfectly fine time. Looking back on the monster I became because of that situation, I’ve learned a big lesson: your only real competition at work should be yourself.” — Jackie

4. “I had a really ornery coworker whom I worked with for about two years. In that time, she made a ton of passive-aggressive comments to me about my personal life. (We had started out as casual friends where I opened up to her and revealed a bit about my personal life — mistake!) Our casual bond quickly went sour when it became clear that our joint supervisor liked me a bit more. Her comments about me had nothing to do with my work. She used the ‘problems’ and ‘issues’ that she perceived as my personal flaws at home as explanations for why I couldn’t do my job well. After a while, I got really fed up and asked her what her problem was. I think she was so taken aback that I confronted her that she just said ‘sorry’ and scuttled off. We rarely made contact after that because we were moved to different teams, but I felt proud I actually said something to her to call her out on her unprofessional B.S.” — Lana

5. “I was one of only two foreigners in a company of around 120 people. I had spent relatively little time in my adopted country, compared to my one (fellow-American) countryman. His bitterness became a source of natural competition, and nothing would remedy: addressing the issue, appealing to his friendlier side. Eventually I realized I just had to choose: let it stick in my craw or roll off my back. He has become a source of immense spiritual training. I’ve learned to maintain a zen-like disposition in the face of the always-oncoming storm.” — Ian S.

6. “Ugh, I wouldn’t wish this on anyone. There was a guy (whom I couldn’t stand) on my team, and we both had to travel to Boston to visit a client. I don’t think he ever realized how much he belittled me or talked down to me, but it was obvious to everyone. I had been putting up with it for about five months when I reached the end of my rope. I ended up saying something kind of nasty to him in front of a client. I had bottled it up for so long that I just kind of work-vomited in a very un-ideal situation. I ended up getting taken off the team, since it was clear we weren’t working well together. I left the job altogether about six months later. Now I would never let something like that fester without communicating about it.” — Stacy

7. “I currently have an office ‘enemy.’ She started at my office less than a year ago (I have been here for four-plus years). While I can’t begrudge her for attempting to further herself and make the best of an otherwise bleak work environment, she stepped on my toes. She encroached on several projects into which I have poured my blood (yes…paper cuts count), sweat, and tears. These projects are MY burden, dammit! While the mature course of action would’ve been to speak with her directly, I approached one of my supervisors who ultimately offered no real support. So, I’ve designed my own coping system: I allow myself to feel angry (without guilt!) by venting outside the workspace (to my partner, who listens compassionately) and then reassert myself as the project manager by establishing direct contact with superiors so they know I’m driving the initiative. These days, as I firmly assert myself in my projects, and she mostly sticks to her own work.” — Carrie