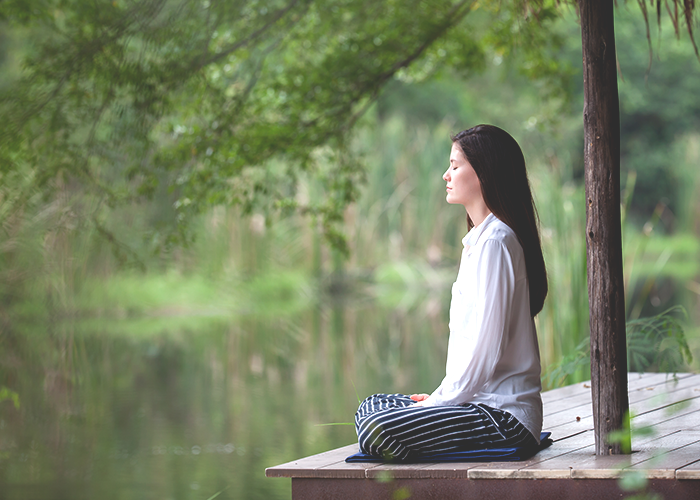 I’ve been biting my nails for as long as I can remember. I would say it’s more of a personality trait than a habit at this point, but that doesn’t make me want to kick it any less. Like many others, I’ve tried, and failed, to quit hundreds of times using everything from mind tricks (Do you know how gross your nails are?!) to religiously painting my nails every week. But alas, here I am — a twenty-year-old with virtually no finger nails.

Many of us have habits like this, whether it’s something like needing to eat dessert after dinner, or constantly checking our phones in the elevator. We’d like to put them behind us, but how?

You’ve tried so many tricks, you might as well take a stab at a couple more. Who knows? Maybe this will be the time you banish them for good. Here are eight ways to help kick your dirtiest habits to the curb.

1. Bring Back the Swear Jar

Your mom may have been on to something. What if every time you reached into the cookie jar you had to pay yourself $1? I, for one, would be flat broke. The good news is you can set your price as high or as low as you like — and you may start seeing the numbers in your bank account start to climb as a result. Working in the opposite direction, by starting with a lump sum and taking money away, may prove even more beneficial.

A study published in the Annals of Internal Medicine found that giving someone a financial incentive and then threatening to take it away worked better than the promise of a reward. While the researchers focused on fitness–finding that the threat of having money taken from a lump sum proved more motivating than rewarding participants with a small amount every time they completed a workout–the premise can translate to any habit you’re trying to kick. Set aside a chunk of change and envision what you can use it for (a massage? New clothes? A nice dinner out?). Each time you mindlessly scroll through Instagram, bite your nails, or reach for a bag of potato chips, remove a dollar from the jar and put it back in your bank account. Watching the funds dwindle (and the promise of that fun night out or new work outfit go with it) may just be enough incentive to stay committed to kicking that bad habit.

For many of us, our worst habits are linked to a certain time in the day. Maybe you drink an entire pot of coffee at breakfast, or give into the afternoon munchies at 4 p.m. like clockwork. In this case, “know thyself” means setting a calendar invite or alert for a point in the future when you know you tend to cave and give into the draw of the bad habit at hand. Try making the reminder funny or clever, but firm. For instance, “I know what you’re thinking. Go eat a banana instead.” It may be just the reminder you need to snap yourself out of the habitual haze.

On your commute home from work, you happen to pass the most irresistible French bakery…every day. We all love a good éclair, but rewarding yourself after work may get out of hand, quickly. The rule of thumb here is out of sight, out of mind. So, try taking a different route — perhaps one that will take you right past a juice shop.

4. Rationalize Quitting With a Journal Entry

Take time to really consider why you want to kick a certain habit, including your emotions surrounding it, and why you believe quitting will make you happier. Once it’s written down as a commitment, you can constantly return to it during times of weakness. Plus, the simple act of writing it down may make it more concrete in your mind: A study conducted by Psychology professor Dr. Gail Matthews found that those who wrote down their goals accomplished significantly more than those who did not write them down.

The same study also found that sending your goals to someone else ups the success rate even further. Matthews found that more than 70 percent of the participants who sent weekly updates to a friend reported successful goal achievement (completely accomplished their goal or were more than half way there), compared to 35 percent of those who kept their goals to themselves, without writing them down. Clearly the notion that battles are better fought in the company of others applies here. Consider taking it one step further and vowing to banish a bad habit with someone else, which will give you both the added incentive of knowing someone else is aware of your successes — and failures. It may be just the pressure you need to stay on the bandwagon. So call up your friend, make a plan and don’t forget to reward yourselves for the good work along the way. (Perhaps by using that full tip jar for a spa day or tickets to a football game?)

6. Reward Yourself Along the Way

Start by entering a month’s worth of rewards onto your Google Calendar. For instance, if you make it through week one of “Operation Destroy This Habit”, take yourself for a massage. Week two, maybe you take yourself out for ice cream, with sprinkles. You know yourself best, so plan rewards that will get you excited about saying “no” to your worst urges throughout the week. This tactic is employing the use of extrinsic motivation. When we are internally motivated to do something, the desire comes from within: you do stuff because it feels good to succeed or master it. But when you have not yet created that intrinsic motivation, you may need to establish an outside incentive — or extrinsic motivation. So if you’re trying to kick the habit of buying lunch everyday, put it on your calendar to have lunch out at your favorite place if you make it two weeks bringing your own to work. The promise of that massive burrito may just be enough to convince you to kick the bad habit of throwing $10 at the deli every day.

Olympic athletes visualize their victories, so why shouldn’t we? According to Angie LeVan of Psychology Today, “Mental imagery impacts many cognitive processes in the brain: motor control, attention, perception, planning, and memory, so the brain is getting trained for actual performance during visualization. It’s been found that mental practices can enhance motivation, increase confidence and self-efficacy, improve motor performance, prime your brain for success, and increase states of flow.” Take a seat, and start visualizing the new you. Who knows? Three months from now, you could be living independently of your worst habit.

8. Surround Yourself With Real-Life Examples of Your Goal

You’ve heard it time, and time again — you are the average of the three people you spend the most time with. If your best friends are the type that never work out, binge drink, and order mozzarella sticks at 3 a.m., they may be roadblocking your attempt to propel yourself towards healthier habits. Surround yourself with people who live the way you want to live (free of the grips of your worst habit). If you want to find a new tribe to help you drop your bad habit, try joining a club or group that will help you see your goals through.