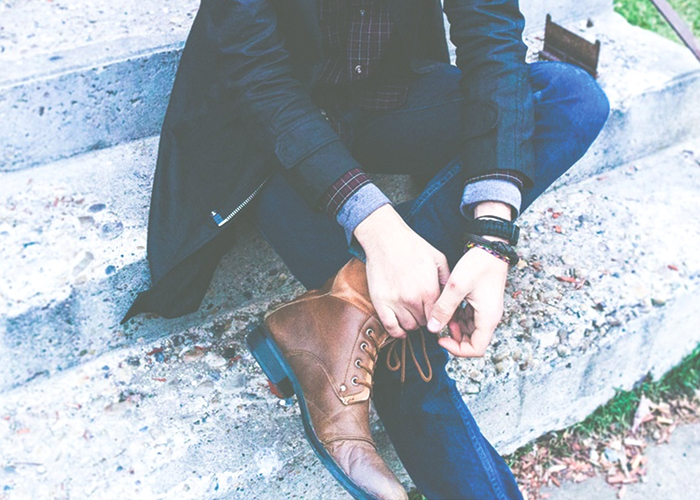 I’m not proud to admit this, but aside from bills and general grown-up life things I need to pay for (yawn), almost 100% of my purchases are due largely in part to a sick Pinterest obsession. I tend to feel like my self-esteem is pretty high, and I generally feel really comfortable about my life – that is, until I see some super-chic girl on Pinterest sitting in her all-white bedroom in a breezy, casual-cool outfit with hair that is somehow magically void of split ends. Then I freaking hate myself.

I buy so many things out of nothing more than a fleeting desire to be a certain way; a better way. I see a tall, leggy model with a full chest looking impossibly sleek and somehow still curvy in a slinky dress, and think “if I wear that, I’ll be like her.” But then I put the outfit on my awkward, 5’2” virtually-shapeless frame, and am still regular old Mary. My boyish hips don’t disappear because I spent $50 on a completely impractical leather miniskirt. I don’t achieve anything near effortless Parisian-chic by putting on a pair of pricey sunglasses that squeeze the sides of my head. I don’t look like a dewy Instagram beauty-guru just because I dropped $75 on greasy, cakey makeup at Ulta.

But hell if I haven’t tried.

However, when I asked my always-hilarious community of friends and peers if they had similar tendencies, I got an overwhelmingly funny response. These are some of my favorite “aspirational purchases” made by eight people, and whether or not they ended up delivering on what their hopeful purchasers so deeply desired.

1. “I bought a lot of mason jars as chic room decorations, but I actually don’t have anything to put in the jars, so now I just have a bunch of empty jars. It isn’t cute, it just looks like I run some sort of jelly factory. Pinterest is dangerous.” – Taylor, 23

2. “My watch was an aspirational purchase. Watches are one of those things we really don’t need anymore. Its functionality is novelty at best. But people who seem to know what’s going on have watches for no real logical reason. I decided that I always wanted to look forward and know what I had to do in life, so I wanted a watch I could be proud of. It cost almost $300 and I’ve never spent that kind of money on anything I’ve ever owned – I’m fairly sure my entire wardrobe minus my suits cost only slightly more than my watch. I didn’t need a watch for any actual use; I needed it for a mental boost and reminder. But I do love my watch; I wouldn’t be a real adult without it.” – Drew, 27

3. “I saw this one girl come into the restaurant I was working at wearing a mini skirt with fringe. I thought ‘damn, I can do that!’ I found a cheap one, and after much debate, I said fuck it and bought it. Even though I wore it for 15 minutes in the dressing room, it wasn’t until I was walking around in it outside that I realized the skirt pulls up and the strands clump together. I love how fringe looks but I hate wearing it. The skirt does look great, but only if I stand still.” – Halle, 21

4. “Rosetta Stone Arabic. And all of those stupid Alex and Ani bracelets. Neither were worth it.” – Kiernan, 26

5. “I watched a YouTube video where this girl ‘hauled’ a bunch of grungy, trendy Urban Outfitters clothes. I went there literally the next day and spent probably an entire paycheck on overpriced garments that mostly just make me look like I’m going through a bad high school phase. I need to stop YouTube-ing, it isn’t safe. I’m getting too old for that shit.” – Emily, 31

6. “I saw Chris Hemsworth wearing a dark blue V-neck, and since I feel like I’m destined to be Thor, I bought like three V-necks in three different shades of blue. Sadly, I regret it, because I can’t pull off V-necks” — Mike, 23

7. “I did buy army pants once because I saw Miley Cyrus wearing them on Hannah Montana and I wanted to be like her.” – Carolyn, 22

8. “99.8% of my belongings were aspirational purchases. Most recently I got a pair of jeans I thought looked super cute on the model, but they actually just gave me a camel toe.” – Margaret, 21