8 People On What They Learned From Their Radical Home Decluttering 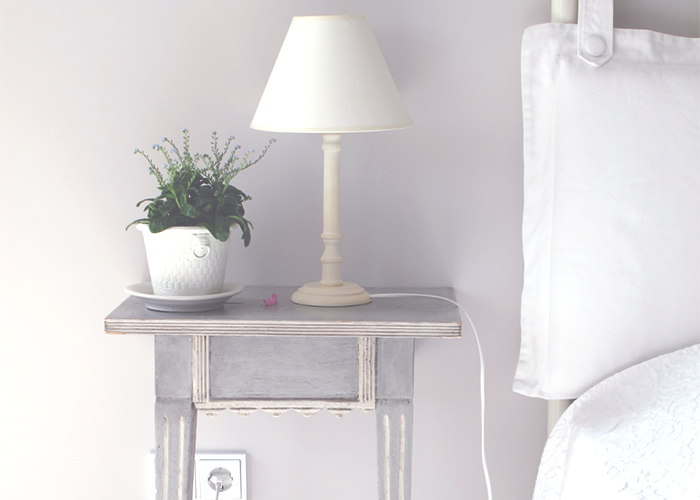 Decluttering. It’s one of those super-intimidating words that sends a shiver right through me. It’s a task I’ve never been able to accomplish (I’ve only done small-scale purges here and there), so I’ve resolved myself to accepting I’ll never be a “minimalist,” possessing only the essentials. However, while I scoff at people who come out swinging with their “I purged 80% of my belongings!” stories, there’s a big part of me that fears I’ll never be able to achieve inner ~zen~ if I’m incapable of purging. Am I doomed to feel stressed and anxious because my happiness is tied up with my material possessions??? I don’t consider myself a materialistic person (then again, most people don’t), but I know there’s got to be a happy medium between having multiple closets, and living with one paltry box of possessions.

I’ve read up on a number of decluttering strategies, one of the most famous methods being the brutal (IMO) KonMari Method. Marie Kondo, who wrote the book The Life-Changing Magic Of Cleaning Up, explains that we should only hang on to items that make us happy. She explains, “Keep only what ‘sparks joy,’ discard everything else, and assign a home for everything within your home.” What happens if I feel like everything sparks joy??? For me, not having a brutally-discerning eye is the stumbling block that keeps me from purging my belongings. I want to feel empowered to let go of stuff I don’t need, and while I’m no hoarder, I could do with a massive spring cleaning.

In an effort to keep myself feeling motivated to undertake the serious task of decluttering in our apartment, I’ve looked to the experience and wisdom of others. I’ve rounded up eight stories below, which will give me tips, tricks, and examples of how other real-life people decluttered their home. Maybe they’ll help you as well — take a look!

1. How I Decluttered My House 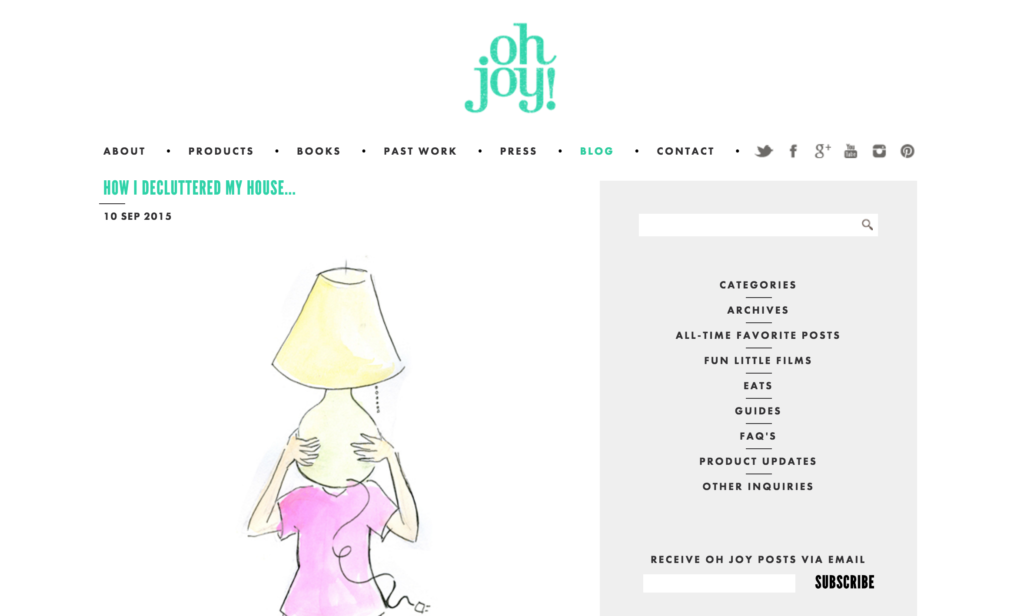 Joy talks about the way in which she decluttered her home by tackling the process in multiple steps, which she completed over the course of several days. She talks about one step in particular, which helped her through the process, called the “Pre-sort.” She says, “This step was mind-blowing to me. Usually, when I try and get rid of stuff, I look at each piece one-by-one and decide what to do with it as I go. But if you pull out everything of its kind, lay them out together, and look at them as a whole, you can get a better grasp of the full picture.” I adore the Oh Joy blog, so I especially loved that this article provided some insight into how she organizes her home/personal life.

2. Moving To A Smaller Home, And Decluttering A Lifetime Of Belongings 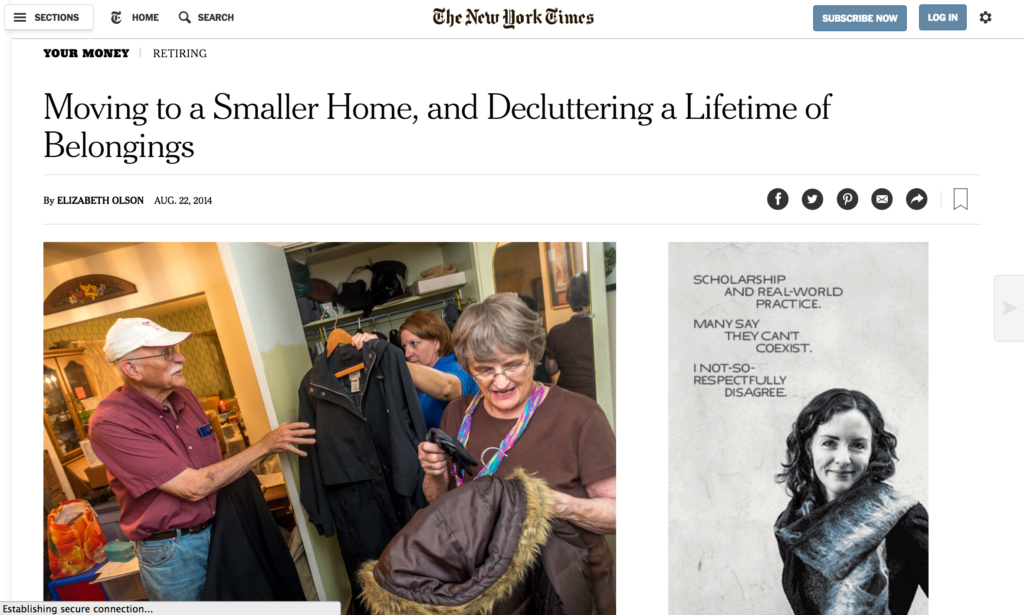 This article was a story of radical decluttering of a specific kind. So often, I stumble upon vaguely trendy stories of decluttering — articles along the lines of, “everything I own fits into one chic box.” This New York Times article followed an older couple over the course of several months as they radically decluttered their home, which had acquired 44 years worth of belongings. They needed to purge because they were significantly downsizing before moving into a retirement community. It was interesting to read through this article, and to see just how much stuff this couple had accumulated. I found that I related to the emotional connection the couple had with their material possessions. Kimberly McMahon, the woman helping them move, explained this further saying, “Downsizing is the hardest because it is emotionally difficult for people to release their history. It’s the worst anxiety associated with any move.” Ain’t that the truth. 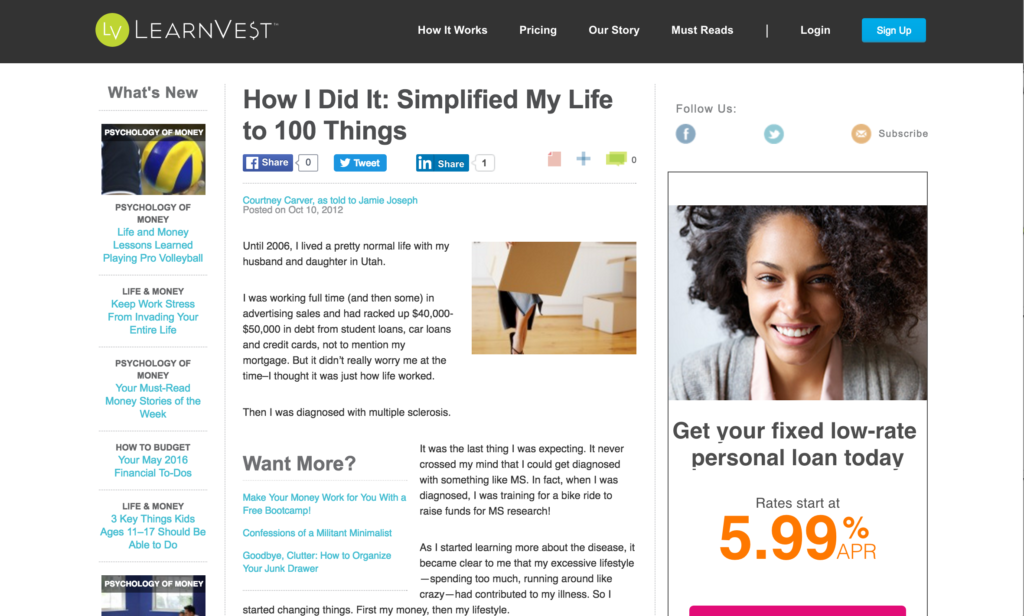 Courtney Carver was diagnosed with multiple sclerosis, and it sparked a massive change in her life. Courtney felt compelled to drastically simplify her life, and clear out a ton of her old stuff. She took a radical approach to downsizing, and pared down her possessions to just 100 items. Courtney talks about the process as a healing one which helped her realize that the things she loved most weren’t material things. She didn’t stop with decluttering her own home, and she sought to change the lives of others, too. She talked about starting an organization called Project 33 saying, “I started Project 333 through my blog, which encourages participants to scale down their wardrobe to 33 items for three months at a time.” Read the article to learn more about her experience dealing with her illness, and more about what Project 33 is, and what it does.

4. My Marriage Survived The KonMari Method Of Tidying 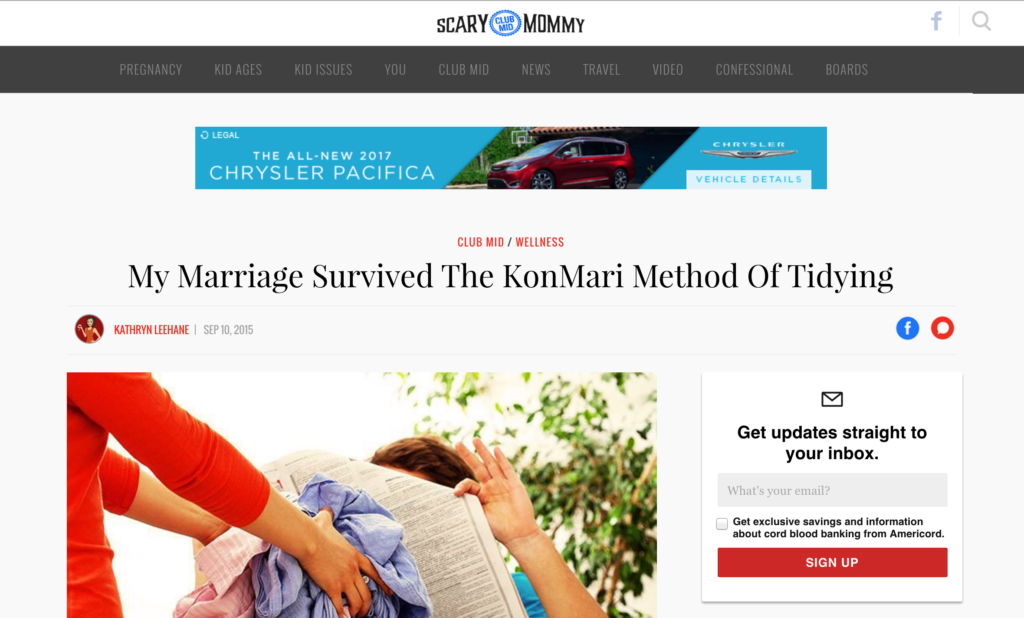 This article was written by a woman who teamed up with her husband to radically declutter their home — in ONE weekend. They used the famous KonMari method (which I wrote about earlier), and it was a hilarious portrayal of what it takes to purge an entire home of unnecessary belongings. It was interesting to read about the choices they made, what they purged, and what was easy (and more challenging) to let go of. Did implementing the KonMari method actually change their lives like they expected it would? Read on to find out for yourself.

5. How I Decluttered Thousands Of Belongings 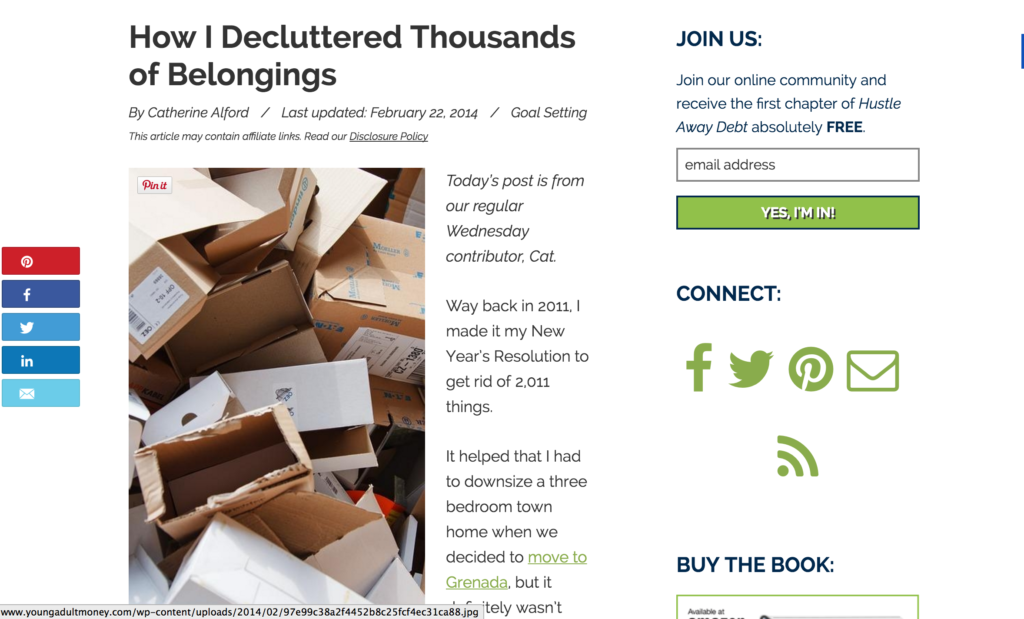 It took author, Catherine Alford, a LONG time to declutter her home and pare down her belongings ahead of her move to Grenada, but she made it happen. She pledged to get rid of 2,011 items for her 2011 New Year’s resolution, and she talks a little bit about how she actually achieved this ~lofty goal~. It wasn’t easy, and she explained, “After many months of planning, a big garage sale, and 42 (yes, I counted) trash bags, I reached my goal of getting rid of over 2,000 items.” Catherine provides specific tips that will help anyone declutter their home.

6. My Life In Boxes: The Final Decluttering Challenge 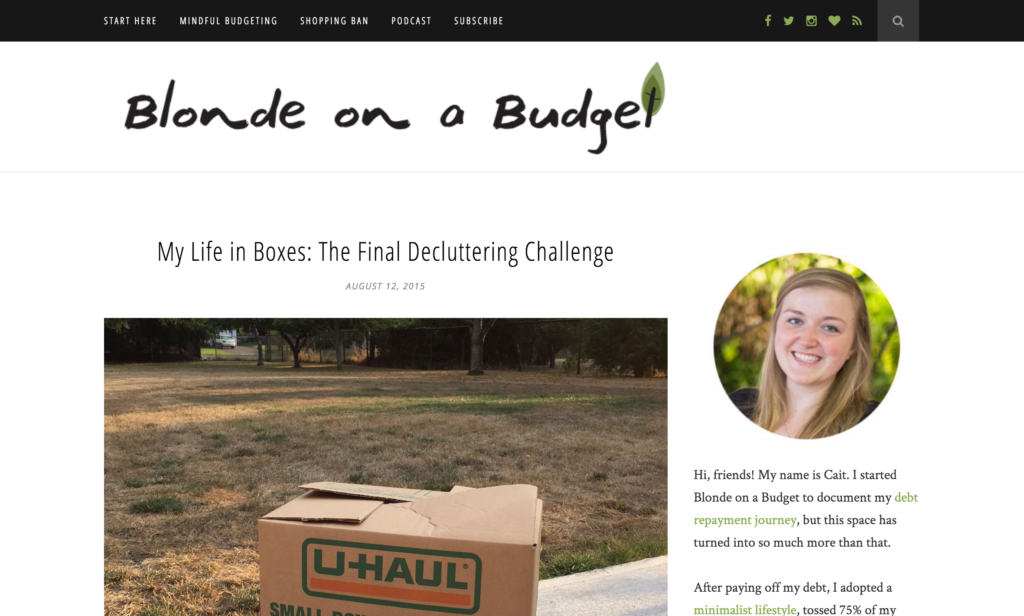 We’ve featured Cait’s stories from Blonde On A Budget here at TFD in the past, and this was another one of her fantastic cleaning/organizing/decluttering articles, which I really enjoyed. She talks about embracing an increasingly minimalist lifestyle after she had already gotten rid of 70% of her belongings. After moving, and packing up all of her possessions into just a few boxes, Cait tackles one last final decluttering challenge. Cait gave herself a firm timeline of two months to complete it, which was helpful for keeping herself on track. She reflects on the amount of space she and her belongings take up, saying, “The majority of my belongings only take up 12 cubic feet; that’s pretty crazy to think about, when you consider that the average size of a home is 2,600 square feet.” Cait documents her final declutter here, and the results are pretty incredible! Check it out! 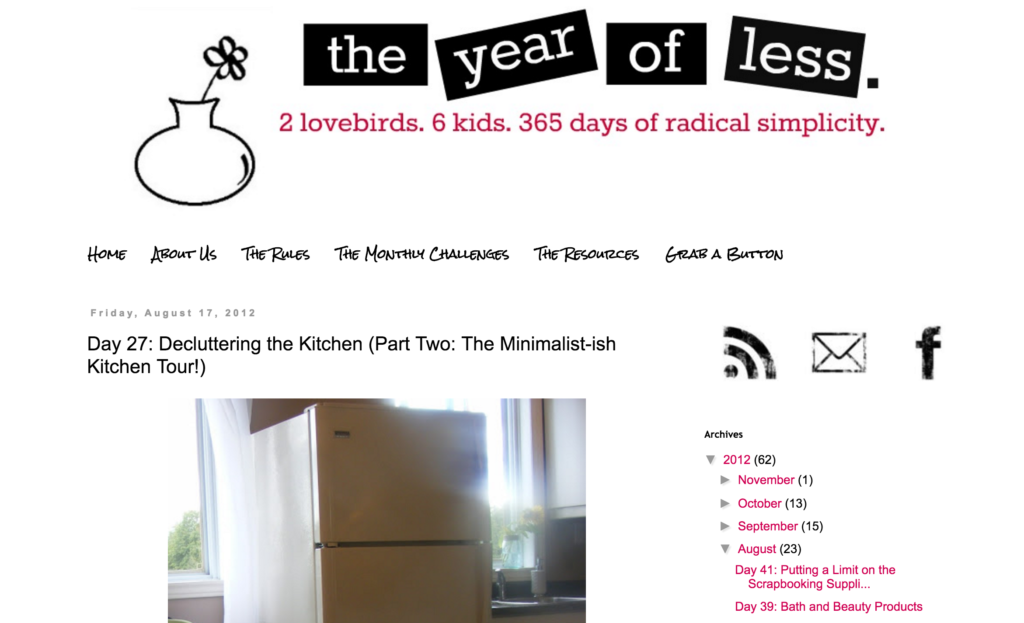 It’s neat to read through articles that focus on decluttering one specific room, and the article above was a perfect example of that. I stumbled upon this write up, which was a neat ~inside look~ into one couple’s kitchen-decluttering endeavors. They began their kitchen decluttering process here, and this article was part two in the series. (I personally enjoyed part two more because it had a lot of pictures, heh.) I loved reading about this couple’s journey because it felt real, honest, and approachable. Too often, decluttering “how-to” articles sound stuffy, clinical, and overly judgmental of people who live with more than a toothbrush, a pot, and one pair of inoffensive sneakers. This couple was honest and thorough when describing what they purged. Check it out!

8. Declutter By Packing Up All Your Stuff, Only Unpack What You Need 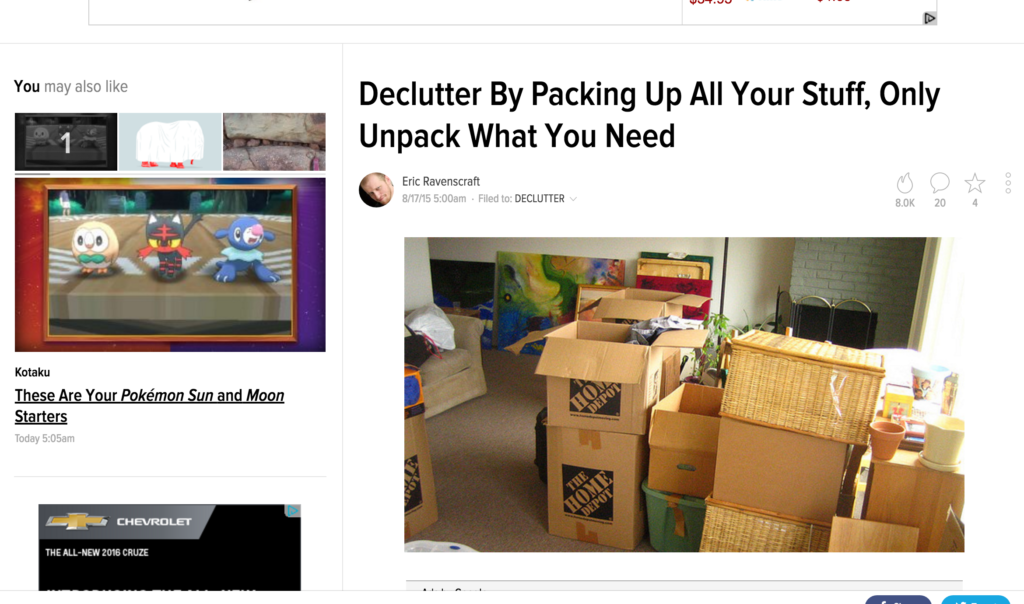 I’ve heard about this box decluttering method before, and it sounds like a brilliant way to purge your belongings. (If I had room in our tiny apartment to fit boxes everywhere, I’d be super down to try this.) Essentially, you’re meant to pack up everything and remove/unpack the items you’re actually using one at a time. It’s a useful way to illustrate, in a very visual way, what you are and aren’t using. You give yourself a set period of time during which you withdraw items from boxes as you use them. Anything leftover at the end of that time is sold, donated, or given away to friends. Check out the article above for more detail!