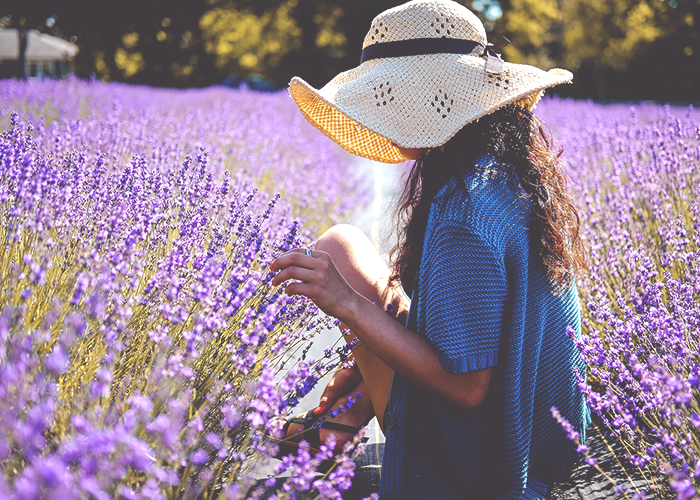 I think I’ve mentioned more than once on TFD that I love flowers, but don’t feel like they’re a good thing for me, financially, because they cost a lot and basically die within three days. They’re beautiful, yes, but something that only lasts a few days and literally has no function aside from sitting and temporarily looking pretty isn’t really something I’m on board with spending money on right now. And it kind of sucks, because I’m one of those girly girl types who thinks flowers are genuinely the most magical thing they’ve ever seen. They are beautiful. I want them. But shit, I can’t have them.

However, I recently bought a bunch of dried lavender at the grocery store, and upon arranging it delicately in mason jars

and vases around my apartment, realized that they were a cheap replacement for the fresh flowers I covet — even better than fake flowers, because dried lavender is real which makes it feel even more luxurious and special.

I’ve gotten a lot of mileage out of this purchase. One bunch of it was only $9, and it gave me enough to spread amongst a few different decorative jars throughout my home. It looks like I walked outside this morning and picked a bunch of pretty lavender, but it is really old, dried up stuff that is just going to stay looking (and smelling) pretty indefinitely. (I’ve had it for over a month now, and it still smells and looks amazing as a centerpiece in the middle of my dining table.)

Some purchases, however small or insignificant they may seem, just get a shit ton of mileage.

I decided to ask people what purchases they’ve spent on that gave them the most bang for their buck, and see if I could get any inspiration to make sure I make more purchases that last me forever and really kill it on cost-per-use.

I asked eight people to tell me about the purchases they’ve gotten the most mileage out of — this is what they had to say.

1. “As far as purchases that I consider to be actual investments, my Chanel bag. I love designer handbags, and while I know it is totally frivolous and unnecessary, I also felt somewhat justified buying a classic Chanel flap bag because the price increases on it basically every year. I’m most likely not going to lose money on this purchase — I might even profit if I ever sold it one day.” — Christine

2. “It is probably really lame to say my car, but I bought a used car for about $10,000 about five years ago and it is in perfect condition in spite of the fact that I commute over an hour every day. I put so many miles on this thing and it is still perfect, and I use it so much.” — Rebecca

3. “I don’t think I realized how many things I’d use a Magic Bullet

for until I bought one, but it was only like less than $50 and I use it multiple times per day to make smoothies, sauces for food, chopping vegetables, etc. It saved me buying a lot of other more expensive appliances probably.” — Taylor

4. “I bought my phone outright for $1,100 and saved a ton of money. It was honestly the best bang for my buck — it was a lot of money at once, but think about how often you use your damn phone — a lot.” — Andrew

5. “My house — I bought at age 25 which was never something I thought I would accomplish, but I moved from New England to South Carolina and things are just so much cheaper there. It is kind of crazy how much bang for your buck you can get real-estate wise by moving out of expensive areas in the northeast.” — Liza

6. “I went through a bad-skin phase where I bought every skin product on the market and ended up falling in love with a night cream that was $300. Which is TOTALLY goddamn insane, except for the fact that it changed my skin so dramatically that it was totally worth it. $300 once a year is a small price to pay for feeling confident in my skin, and not feeling like I need to constantly be test driving new products, which I’m sure added up to more than $300 per year.” — Amie

7. “I bought a really nice set of pots and pans

. I mean really nice. I’m gonna gulp and tell you that it cost me nearly $1,000. It sounds like a lot because it totally is a lot, but I had the money and I really wanted high-quality cookware. I can say with confidence that it makes a huge difference to just have stuff that cooks better and cleans easier and is just of really excellent quality. Food is food — in its raw form, it is basically all the same. What really matters is how you prepare and cook it. I think oftentimes the difference between an okay meal and an amazing meal of the same exact food is cooking it in pans that just heat and cook perfectly. I don’t really know if I’m full of it, but the pans make me want to cook every day, and they really seem to make everything I cook come out way better. And I obviously use them every single day of my life.” — Kim

8. “I moved into an apartment with a washer/dryer hookup but no unit, so I ended up just biting the bullet and buying a stacked washer/dryer

, and it is hands down the best thing I’ve ever done. It was a big upfront cost for sure, and I’m not even positive financially it works out to be less expensive than washing my clothes at the laundromat, but just in sanity and hours of productivity alone, it has been worth it to not have to run out every time I want to wash something.” — Jason