How I Became The Girl Who Spends $300 On A Jacket 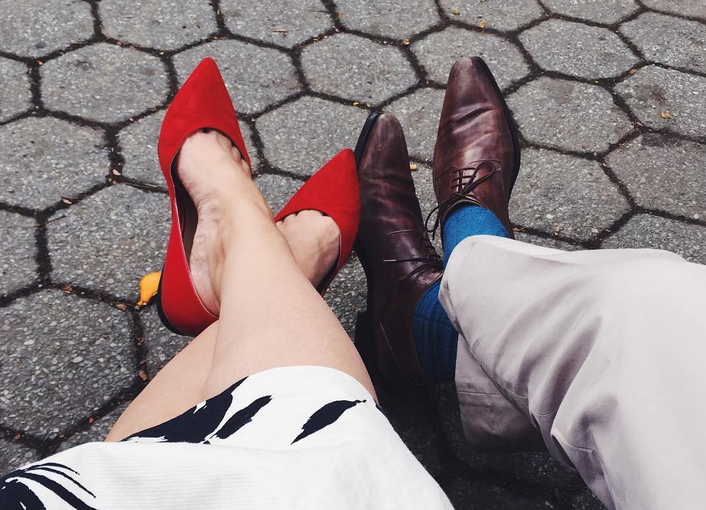 When I was 19, I worked in an upscale shoe store full of things I couldn’t afford, selling beautiful leather products to women whom I would otherwise never speak to. While they picked out their Fryes and Stuart Weitzmans, I got to learn a little bit about their life, drawing closer to their world from the periphery of their retail world. No matter how objectively dull and WASPy, these women exuded elegance and style to me, and inspired in me this odd mix of envy and admiration. Everything — down to the way they swiped their gold cards without looking at the number on the register — felt incredibly special to me. I remember one girl, who picked up hours at the store every now and again specifically for the discount, would type her father’s credit card for near-four-digit shoe hauls into the machine because she had memorized it, and nearly never carried it with her. It was a level of access that I’d never conceived before that time, and even though that girl was an absolute terror, at that time I would have given anything to be her.

As I grew up, in part because of my own broke-student-ness, but also in part because of the great display of detached, unfulfilled wealth I was exposed to at this job (and my stint at the Yacht Club), I came to take great pride in not being the sort of person who spends on clothes. It gave me a little thrill to identify myself as someone who spends exclusively on “experiences” — vacations, good restaurants, stints abroad, recreational classes — because it made me feel like an inherently more mature and thoughtful person. I admit, for a while, there was even a hint of internalized misogyny to the whole thing, as spending hundreds of dollars on “a dumb bag” or a fancy dress was something only shallow, stereotype-fulfilling women did. I enjoyed the fact that I was someone who would always take a cheap piece of clothing to fill a void, and direct my money to something that would enrich me as a person. Until rather recently, I only owned a handful of items that were in the three digits.

Last year, though, I did a closet purge as one of the very first projects for this blog, and whittled most of my wardrobe down to neutral, versatile items. It was then that I bought a few of my first “true” investment items (outside of one very misguided designer bag I acquired in a fugue state after selling my first book). It was a good start for sure, but outside of the items I bought when deliberately creating my wardrobe, I didn’t make any kind of hard and fast rules about no longer buying fast fashion, or just picking something up “because,” as is anyone’s habit when they’re used to clothes that come with some level of disposability.

Though I can say that my wardrobe today, a year after the purge, is much more restrained and deliberate than it would have been had I not embraced #NeutralLife, I still managed to accrue a good handful of items that I know very well won’t last the winter, but which I bought because I could, because it was cheap, and because I still have a hard time opening my wallet for the stuff I know I should be buying.

Like many of us, I watched the documentary The True Cost recently and was blown away at the impact my “not that big a deal” purchases had on the world around me. On some level, we always know that these miraculously low prices aren’t miraculous at all, but rather the result of a grand orchestration that prioritizes our convenience at the cost of a humane and decent life for much of the world (not to mention the environment). But we look the other way because it’s simple and instantly gratifying to do so, and because we think that spending a lot of money for a single item of clothing or accessory is something only rich people do. I admit that, even after my closet purge and year of more thoughtful buying, I still had fleeting images of those women in the shoe store when I considered a jacket I wanted to buy that was well over 200 dollars. I had been regarding those choices as indulgent and the height of capitalist greed, when often it is the cheap-and-quick choice that takes the bigger and more selfish toll on the world.

I got my first pair of Italian leather shoes recently, and in some ways, it still feels odd wearing them. The particular brand, M.Gemi, is one of several apparel brands that aims to put luxury in the hands of “normal” people, and that fact assuaged my weird guilt about now being one of those people who wears shoes that expensive. But when I thought about it more, I realized that these shoes — like the few pairs I inherited from my mother and grandmother — are the kind that will last for years, even decades, if I care for them properly. Making this shift towards being that person, with that kind of wardrobe, requires making a shift about who you think you are, and the judgments that you make on that kind of person. Do I think my grandmother was vain and wasteful for having dozens of beautiful, heirloom items she passed down to me? Of course not. I’m endlessly grateful to have them today, and staggered by the craftsmanship that we rarely find in today’s wardrobes.

I’ve started buying a few investment items here and there, and am ready to start forking up the cash up front for items that I know I’ll want to keep forever (I am in desperate need of a brown leather bag, my not-investment one is on its wheezy last legs). But I admit that understanding what is and isn’t worth it, and not getting sucked into the pointless luxury-for-luxury cult that can come with it is its own battle. I’d never wear, for example, something with a monogram or label printed all over it, because that would mean I was buying it for the wrong reasons, at least on some level. I still do want to pride myself in being the person who would not waste money on clothes, even if that means spending a lot more per individual item instead of little bits at very regular intervals. But when you walk into these luxury stores — as I rarely had before this sartorial change of heart — the whole world is intoxicating. You want to start buying everything luxury, even if you can’t afford it, and even if the item itself is not something you should be investing in. Eventually, certain people get to the level of treating upscale items like fast fashion, and that is something that, even if I were unimaginably wealthy, I would never want to become.

Ultimately, we all have a responsibility to make positive and thoughtful choices about our wardrobes, and our relationship to where it all comes from. And buying fewer, higher-quality items in a more deliberate way is, at the very least, a good way to minimize waste. I want to continue shopping this way for the rest of my life, and eventually end up with a wardrobe that can be passed down to my daughter and beyond, like my grandmother’s was. I want to leave behind something that showed my taste, the time I lived in, and the things I loved enough to take good care of. But I never want to be like the women in that shoe store, mindlessly swiping their cards every season because they wanted the latest styles, even if they weren’t going to wear them. There is a big difference between people who spend money on a wardrobe, and people who spend money on clothes. And if you’re conscious about how you spend, and the choices you make, I think you can very much be the latter.