How I Escaped The Bougie Fitness Culture And Got Healthy 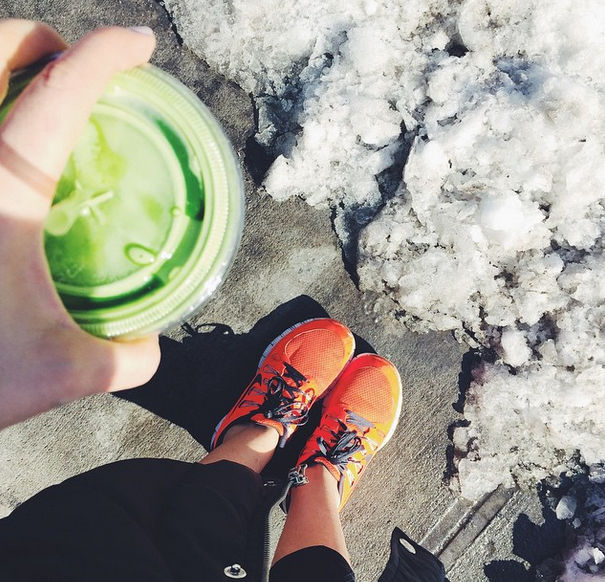 On a recent trip to Urban Outfitters, I noticed a section I hadn’t before, nestled between the pre-ripped crop tops and aggressively impractical jewelry: the workout line. You may have seen it—apparently it’s been around for about a year now. Picking up a pair of $78 ‘abstract engineered leggings,’ I thought about how much we’ve come to take for granted the fanciness of workout culture, whether it be the pristine outfits or the rave-inspired spin class. Were I to buy such pants, I’d feel like I had to go to the premium class just to do justice to the luxurious spandex (in the way that you sometimes go out as though it’s a favor to an under-worn dress). But, unlike bars, workout regimes are all washed in the glow of virtuous ‘self-improvement,’ convoluting any spending decisions with questions of morals and values. In the effort to be your ‘best self,’ it can seem lame, shameful even, to not invest the most you possibly can, physically, emotionally, financially.

Last winter, I bought a membership to a medium-fancy gym in Brooklyn. (Picture “Soulstice” in Broad City). It was a fairly desperate decision, born out of the theory that I could survive the Polar Vortex by de-thawing in the locker room sauna. Also, it was extremely close to my office. That was the extent of my research (problem #1). While $90/month felt sort of expensive, my more seasoned gym friend assured me that’s ‘so cheap!’ And given that annual memberships in Manhattan can run into the tens of thousands, I guess it’s all relative. Almost involuntarily, I found myself regarding it like point of pride. “I signed up for a gym,” I’d tell someone I hadn’t seen in months, as though it was a compelling update of my life.

I’m not really sure why I cancelled after only a few months. There was no one thing I didn’t like, though something about the whole experience tended to leave me with a sort of residual anxiety. Maybe it was the cramped locker room, all Lulu-clad knees and elbows knocking into each other like colts vying for stable space. Maybe it was the constant waiting for a cardio machine, or the trauma of being harshly scolded to clear out faster at closing time. As soon as it became possible to go outside again without silently unleashing a stream of obscenities, it seemed easier to just…walk around a lot.

Six months later, I found myself checking out a new gym on behalf of a significant other. Though I’d heard rumors about Planet Fitness being bizarrely cheap—a regular membership is $10/month, and for an extra $10 you can use any of hundreds of locations around the country—I’d always had an aversion to it. Why so cheap? Why the silly space name? The only people I knew using it were very young men, and I envisioned a room of sweaty jerseys gazing at cheesy, bubble-lettered encouragements as they lifted concrete dumbbells.

But on walking into the Crown Heights branch, the first thing I noticed was simply the colossal size—so wide from end-to-end that you couldn’t throw a ball across it. Then there were the dozens of cardio machines—so many that no one was waiting for one (unprecedented in my gym-going history). Above these, 10 large TV screens broadcasted every major news source, as well as some guilty pleasures. The locker room didn’t have a sauna, but it was spacious. No one was jabbing her elbow into another woman’s armpit just to get to her locker. It beat the old gym in almost every respect. As for the ratio of Lulu Lemon to appropriately priced workout clothes? Old gym: Old of control. Planet Fitness: Normal!

Even then, I worried that maybe I’d go less now that I knew I wasn’t paying as much. But even that didn’t prove true. Turns out I go about the same amount either way. (Which is to say, when it’s convenient, and when I sense my body becoming a pile of Pad Thai).

I have no idea if the hundreds of other Planet Fitness locations are so refreshingly chill, and would not be surprised if some were sub-par. I also get that some people simply need more out of their workouts. If you really love your fancy gym and use it many times a week, then, sure. At that point, it’s like a real hobby, maybe even a passion. But if you are a casual, have-to-talk-yourself-into-it-for-40-minutes user like myself, then it might not make sense to spend a grand of your annual salary on a membership. Over a year, the switch to PF from my old gym will save me $960. AKA, 3 round trip flights across the country.

There are other affordable options. One of my friends swears by her neighborhood YMCA, which is $44.50/mo. And a membership to NYC Park & Recreation (which includes pools and weight rooms) adds only $12.50 to your monthly bill. Maybe the moral of the story is just that whatever your preference, it’s definitely worth doing research. Try them all. Do all the ‘first-time free deals.’ If, after all of it, you still think it’s worth the higher option, at least you’ll know which of them really is the best. And if your experience is anything like mine, you’ll know that the lower options, should you ever need to tighten your belt, can sometimes be a pleasant surprise.