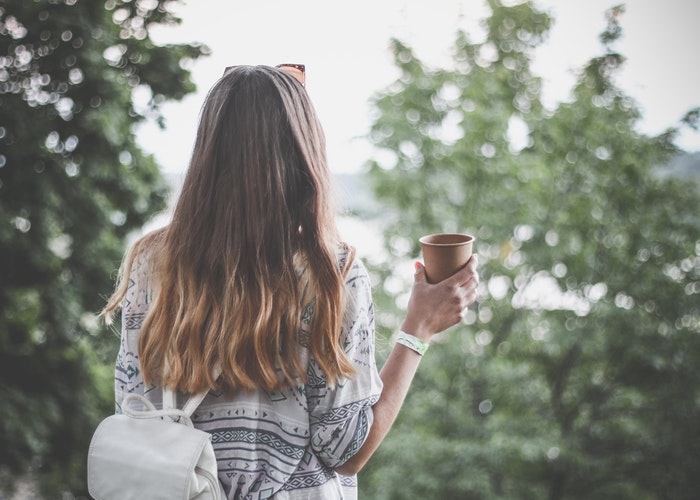 After graduating from undergrad in 2015, I was ready for what the *~real world~* would entail. I was ready to make better money, begin my writing career, potentially even live on my own in a real Adult Apartment™️, and become the person I was always meant to be. Granted, I knew there would be a lot of growing pains along the way, but I was ready to roll with the punches. I was ready to grow the hell up and start my life.

Like most things in life, most of what I envisioned my post-grad life to look like wasn’t the case. Like, at all. I had a low starting salary of $36,000 because I didn’t know about a thing called negotiating. I worked way beyond my scope as a means of paying my dues because I heard that’s what you’re supposed to do.

I wanted to start fresh. I wanted the pain I experienced over the years to be in the rearview. I just didn’t know how to make that happen.

As a result, by the end of the year, I was completely exhausted, totally fucking miserable, and not liking who I was becoming. I was crabby, reactive, depressed, and turning to coping mechanisms like a bottle of $2 wine on Tuesday nights because I literally couldn’t deal with the stress of my job and the mental health issues that have plagued me since I was a kid. Together, these factors created the perfect environment for self-destruction. In 2017, it all came to a head and I ended up in the hospital for suicidal ideation. This was my rock bottom.

As the saying goes, though, after hitting rock bottom, the only way left is up. And the following year after gave me the chance to heal. I went to therapy. I moved back home to live with my parents for extra support. I ended up snagging my dream job. I repaired relationships. Things seemed to be looking up. But the disastrously low self-esteem and misery that settled into my bones over the years was a stubborn tenant. I was healing in a lot of ways, but there was still so much work to be done. Even with everything going well on paper, something in me wanted to scream and run away. I wanted to start fresh. I wanted the pain I experienced over the years to be in the rearview. I just didn’t know how to make that happen.

Then in 2018, a friend of mine said she had a spare room at her apartment in Denver, Colorado. This is my shot to begin again, I thought. I was working remotely, had some money saved, and she was cutting me a fucking great deal to live with her: $650 total for rent and utilities. In Denver, that’s basically unheard of. So I said yes.

If I didn’t like it, I could always move back, is what she and everyone else told me. But in my mind, I was determined to leave my Midwestern hometown behind. For good. Forever. Wipe my hands clean. Good riddance.

The first few months were really great. I felt free. I was finally ready to start over. I read so many accounts of people moving away to new cities alone and the growth and self-discovery they found by doing so. While I did know my roommate, I didn’t really know anyone else in the area. I took this as my shot to really focus on myself. I would be another success story. I’d find a home in Denver! I had to, right? The fresh air, city life, the mountains. What wasn’t I to fall in love with?

The issues I found myself struggling with back home had somehow followed me 1,200 miles

There was just one problem: The issues I found myself struggling with back home had somehow followed me 1,200 miles. Turns out the saying “wherever you go, there you are” rings true. I still found myself succumbing to the depressive episodes that ate me alive back home. This time, though, I didn’t have the support of family and friends nearby to help me through. Plus, I didn’t want to make friends simply to get me by. I wanted true connection. But when you don’t feel like yourself because of mental illness, it’s hard to put your best face forward and connect with new people.

In time, I did make some really wonderful and fantastic friends whom I have come to cherish deeply. But Denver still didn’t feel like home. I am very close with my parents and extended family. I’d see Snapchats of my cousins with my grandparents and my heart would literally ache. I missed being able to simply drive 15 minutes to see everyone. Now I had to drop $300 on a plane ticket.

Speaking of money, Denver is a fucking hellhole when it comes to finances. My roommate and I ended up leaving our little abode for an apartment a little outside the city. We should have just stayed where we were, but we figured a change of scenery could be nice. However, for one-bedroom and my own bathroom, I was paying over a grand. And I wasn’t even living downtown. It was not a smart decision, to say the least, but the truth of the matter was that what I was paying is comparable to the rest of Denver. I had also changed jobs but was only making around $46,000. While it was the most I’d ever made, that salary doesn’t go very far in Denver.

In time, I realized Denver was never going to be where I wanted to stay. Every time I visited home, I’d sob before I left and for weeks upon my return to Colorado. The homesickness wasn’t going to go away. My mental health was deteriorating. At around my year mark in Colorado, I decided that at the end of my lease, I would move home.

While I am so glad I was able to do this, and I definitely did grow, it wasn’t as seamless and beautiful as what I had imagined (and what I had read about). It was mostly very lonely and painful. Despite the baggage I had at home in Michigan, I still missed my family and friends. Most importantly, though, I realized that you can run away from a place but you can’t run away from problems if they’re skin-deep.

The truth of the matter was that a change of scenery wasn’t the solution because where I was physically wasn’t the problem. I guess what I would encourage anyone to do who is considering a big move is to think about whether or not you can financially and mentally really handle it. I am glad I had the opportunity to do it, I really am, I did make some really great friends and did experience some cool things, but I wish I had really known more before going into the move.

Now that I’m back home, a lot of the issues I fled from are cropping up. But I feel more equipped to handle them. I am back in therapy with the therapist I had a fantastic working relationship with. I’m paying rent that isn’t eating up my budget. I’m back by my support system. And sometimes, I even miss Colorado because of the friends I made there. Sometimes, I still feel like I’m crawling out of my skin. But I know moving to a new place won’t solve it — only I can, and I will.