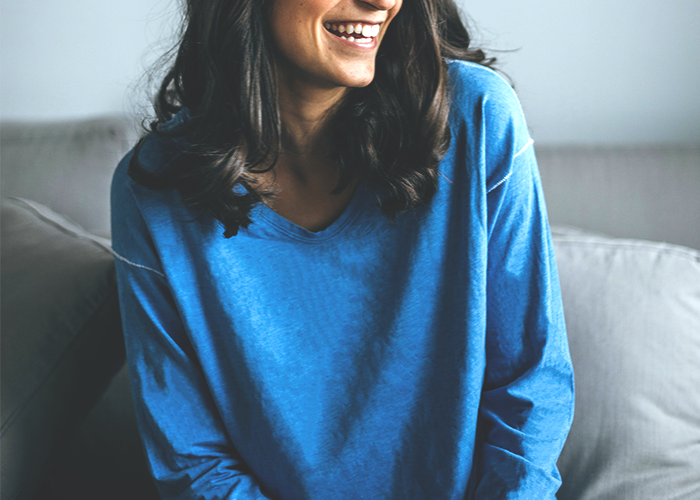 I wear (pretty much) the same thing to work every day. Yes, that’s right, I am Mark Zuckerberg/Barack Obama/That Woman At That Ad Agency In New York.

You know that feeling in the mornings where you just can’t tell whether this top goes with those pants, and can I wear a sweater over it, but what if it’s too casual for that meeting…and the end result is a giant pile of rejected outfits, and nothing feels right? I do. It was a constant struggle in my life, as I tried to piece together outfits that struck a balance between professional enough to be taken seriously as a young woman, and casual enough not to stand out like a sore thumb in my “You can totally wear jeans!” tech and agency offices.

Thanks to my work uniform, I haven’t felt that way in over a year and a half. That’s right: I’ve been wearing the same work outfit for more than 18 months, and I will still proudly declare that it’s the best decision I’ve ever made. (Yes, there have been a few exceptions to the uniform, like on days when I opt out of doing laundry and wear dark jeans instead of my trademark black pants, but they happen so rarely that they’re not notable.) I’ve written about why I started wearing the same thing every day, and covered my coworkers’ reactions (which were surprisingly positive!), but I’ve never touched on the financial side of things.

Did this decision actually impact my money? The short answer is hells yes, in a big way. But as usual, there’s a more nuanced version of the story, because this decision has had different impacts on my money at different parts in the process — and it definitely wasn’t free.

This isn’t really the kind of strategy you can inch your way into — and I know, because I’ve tried. For years, every new piece of clothing I got was imbued with the hope that this was going to be My New Look, and the foundation for everything I bought going forward. Dude, it’s one sweater, it’s not going to overhaul your whole closet, or follow you around guiding your other purchases. (I know this now.)

So when I decided that yes, I was committed to trying this out, and fed up enough with choosing outfits that I knew I could stick to a work uniform for at least six months to make the clothing purchases worth it, I went shopping with one goal: Find a top that I could buy five-to-seven of, that would layer well under a blazer, and wouldn’t be too high-maintenance. (No dry-clean-only for me, thankyouverymuch.)

I found my top, a silky, machine-washable, not-see-through t-shirt blouse, at Express, and literally bought the store out of the mediums they had on hand in both black and white. Along with those, I found a pair of black skinny jeans that fit perfectly, and boom. I had my outfit — and was down about $400 (in US dollars, $297.28). (I say about, because I hadn’t yet started tracking my spending.) So the first money lesson in all of this: it’s not the cheapest strategy to get started with, and you’ll need to know you’re at least somewhat committed to giving it a try for a few months. Otherwise, you might just end up with a closet full of the same outfit you can’t stand to look at because you’re so bored of it.

If you live someplace where the weather holds steady all year round and is temperate and beautiful…I mean, I’m not saying we can’t be friends, but I’m hella jealous. I live in Ottawa, which is just about as variable as you can get when it comes to weather. We’ve got scorching hot, 95-degree-Fahrenheit, don’t-touch-that-hot-metal-thing summers with bonkers humidity, and we hit minus-40-degree-Fahrenheit, don’t-touch-that-cold-metal-thing on a not-infrequent basis in the winter. So I know about dealing with seasons when it comes to clothing.

Before I started my work uniform experiment, seasons were the death of me. More accurately, they were the death of my budget. I relied on really variable clothing to suit different seasons, and whenever I needed to replace a sweater, I went out and took in all the trendy new ways I could be dressing at the mall. More often than not, this was not a cheap or frugal activity, and I’d leave with purchases that seemed perfect at the time, but were either totally disjointed when I got them home, and didn’t really fit with the rest of my closet.

This is where the work uniform approach has saved me the most money. Sure, I still hope to be a perfectly put-together J. Crew model with an endless closet and perfect accessories whenever I walk by their store displays, but I’ve completely cured myself of thinking that’s something I will — or can — do in the near future.

Total money spent on being season-appropriate or on-trend? Zero dollars.

Adding On To “The Uniform”

(Alternate title: the magic of layers.)

After the blissful summer season where my black pants and white top combo was perfectly appropriate, winter came, and with it the kind of bone-chilling temperatures that made a silky short-sleeved top the kind of thing that earns you some crazy side-eye. Like, did she not even look at the frozen wasteland that is our city before getting dressed today? Also, I was so cold. So I bought some layers to toss on top of the standard uniform.

This was during my year of tracking my spending, so I can tell you that three knit cardigans from Express ran me $159.95 (USD $118.87) exactly during their Boxing Day sale, and they’re still going strong as we head into the colder months this year. Bonus, they’re also key when the air conditioning gets aggressive during the summer. Offices, amirite?

Ok, true life confession: my professional-yet-casual black pants are actually from American Eagle. What can I say, their pants actually come in lengths suitable for my gigantor frame (I’m very tall, which can be hard to convey on the internet, but there you have it). They also fit like a dream, so until they change their sizing or fit, I’m hooked. The only problem? They don’t exactly last for years. However, they’re pretty reasonably priced, so if it means I buy a batch of pants every year, that’s okay with me. I did exactly that this summer, and dropped $275 (USD $204.38) on replacing two pairs of jeans that had long outlived their useful life, and two new pairs of my beloved uniform pants. They’re so good that I put up with going into American Eagle and realizing that I’m not a ~youth~ anymore on a semi-frequent basis, okay? Those are good pants.

The Grand Total I Spent on My “Uniform”

So if you look at the direct costs of the outfit I wear every day, and the indirect layering-and-replacing costs, I’ve spent about $834.95 (USD S620.53) in the past 18 months on my work clothing. Which, you know, is probably the same as what I spent over the course of six months before starting up this whole crazy idea in the first place. But here’s the thing: this was never about the money. (Or, lol, the “fashion.”)

This was 100% about not having to think about what I had to wear to work every day. Eliminating that one decision saved me hours of stress, and piles and piles of feeling uncertain and awkward and less-than-totally-confident during my day to day. Decision fatigue is real, friends, and I’d rather spend my limited decision-making energy on things that make a real impact, like my work or my relationships or literally anything other than my clothing. I just don’t care about it enough to spend any more time than I have to thinking about it.

I also hope that what I wear is the least interesting thing about me on a consistent basis. Which, while this work uniform approach is entirely offbeat and weird and notable, might be asking for a lot. But you know what, I accept that high bar, and will continue to wear (mostly) the same outfit with pride. And I’ll revel in the fact that I’m not “overdue” for a fall shopping spree at the mall. It probably has a lot to do with why I can afford all those pumpkin spice lattes.

P.S. If this doesn’t provide a super-clear example of how minimalism is privilege, I don’t know what does.