On Furniture Envy, And The Search For The Perfect 20-Something Apartment 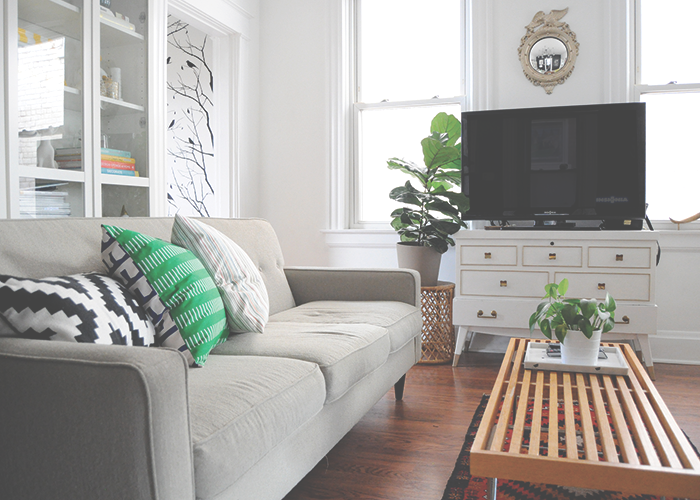 I got into a semi-heated argument with my boyfriend this morning over a couch. And not even a couch we own, or are getting rid of, or are in the process of buying — we were fighting over a hypothetical couch. You see, ever since we knew that we were looking for a new apartment, I knew that I wanted this one particular royal blue velvet tufted couch, one that Marc has always found to be an assault on the senses. “It’s the Forever 21 of couches,” he told me this morning. “How could you??” I replied, as if he were talking about something I had made with my own hands. But how could he not see that this couch — fun and bold and chic, perfect with the exposed brick in the apartment we submitted an application for last week — would take us to an important new aesthetic level?

And that’s it, right there. I imagine that this couch, along with the upscale string lights and the exposed brick and the oversized mirror leaned up against the wall, will do something magical and undefinable to my life. Every apartment I’ve ever had until now, I either lacked the financial resources to decorate in any coherent way, or was in such a rush to move — as when we arrived in New York from France — that we simply selected the first apartment we saw to get out of our expensive AirBnB, despite its objectively terrible layout. I’ve never had a place that truly felt conscious and thoughtful, and which more importantly felt like an extension of myself. As much as our clothing choices paint a picture of ourselves to the outside world, our apartments are arguably an even more potent perspective on our inner lives.

They are our nests, the place where we curl up in the winter and invite people over for cocktails. Every pillow and knick-knack is something we chose, or at the very least inherited. If our plants are lush and thriving, or if our walls are bare and white, or if all of our furniture was acquired at random — all of this means something. And much like the devastating Meryl monologue in The Devil Wears Prada, even our choice to abstain from the game of interior design is a meaningful choice in itself. Opting out is opting in, just to a different set of priorities. And I fully accept that many people simply don’t care that much about what their living space looks like, and I don’t think that there is something that needs to be changed about them.

In some ways, in fact, I’d say I envy them. Because it’s probably a lot more satisfying to be someone who doesn’t give a shit about decorating their living space than to be someone who feels constantly unable to manifest their internal design monologue, like myself. I constantly apologize, in an almost compulsive way, about the way my apartment looks. I never feel at home there, or am satisfied with the way it has come together. And in spending the past few weeks white-washing a lot of my furniture for my upcoming move (after living in a dark apartment for so long, I crave bright levity), I realize that even the objectively tedious work of redoing furniture makes me deeply happy. It feels intentional, like I have a modicum of control over the nest that surrounds me, and that despite having to load up on IKEA furniture during our expensive and logistically-difficult move to New York, I’m not condemned to keep things that way forever. I can transform even a crappy item into something I love, with a little TLC.

I know that part of this comes from growing up with my mother, whose living spaces were always impeccably decorated and coordinated. Even when the aesthetic of the moment wasn’t something I would have chosen for myself, you couldn’t deny that her taste was always consistent and thoughtful. She picked a theme and worked backwards from there, and used terms like “color story.” She also flips houses and builds furniture, and has almost no pieces in her current apartment (the object of my design lust) which look today how they came originally. She redoes everything to her taste, something I’ve always been unable or unwilling to do, and something I’m learning to do now. (My mother is also taking the lead on TFD’s upcoming DIY vertical, starting by teaching me the basics of redoing furniture and making basic home upgrades, which I realize is a big part of my struggle to love my own apartment.)

My mother has always taught me that you should never envy someone who could just fill their apartment with expensive pieces, because anyone can do that. The truly impressive living spaces should be the ones where every piece is original because they adapted it, and they had the vision to mix flea market or Craigslist finds with one or two heirloom items. And I admit that, for a long time, I wasn’t listening to this. I would feel immense envy towards the few apartments I visited in New York that felt like West Elm catalog photos, where everything was clearly out of the box but, goddamn, it looked good. I had to even unfollow a few people on Instagram because their elaborate, perfectly-appointed spaces felt like indictments of my own little one-bedroom.

I realize that I have the image of the perfect 20-something city apartment in my head. It’s modern and eclectic and full of things like bright pops of color and white furniture and a sputnik chandelier. It represents the ~creative~ job I do, but is put-together enough to have a few extra sets of guest linens. It’s unexpected and interesting, but has all of the basics covered in a way my mother would approve of. And when I’m saying these things about this space, I know I’m saying them about myself. It’s what I want people to think of me when they enter my space. And after spending two years in Brooklyn — mecca of all things reclaimed wood and farmhouse chic, which do absolutely nothing for me — I crave that airy, elegant Manhattan aesthetic.

And it’s easy to feel that visceral pang of lust when you see someone who captures it, but it’s also easy to confuse money with taste. If we all had unlimited resources to appoint our living spaces, chances are a lot of us would be living in a really interesting, beautiful way. The real talent lies in making do with what we have, and in getting creative about how we manipulate things. The perfect apartment in my head is not going to come through buying a single blue couch that screams “whimsical New Yorker,” especially if the person I love most in this world — who has to live with it, too — hates it. It’s more important to me that Marc be happy and at home than that I have the absolute perfect pieces for my vision.

Not getting that one piece will force me to be more creative, to take a less bold color of upholstery and make it just as bold and interesting through pillows or throws or a fabulous print hung behind it. I will have to think harder, and come up with something that is even more representative of who I am in the process. Having recently redone my dining table in white, I can confirm that it feels so much better at the end than if I had just bought a white table. I made something! And I feel proud of it, on top of being happy with how it looks!

Eventually, I will have the apartment that truly feels like my little retreat from the world, and truly representative of who I am. But I’m never going to get it by filling my cart with the perfect items; I will have to create it, and do so actively with my partner, who generally adores what I choose but still has the errant strong opinion. And ultimately, learning to do it all myself will be so much more worth it, because no one should live in a perfectly-appointed castle where they can’t even change a lightbulb.