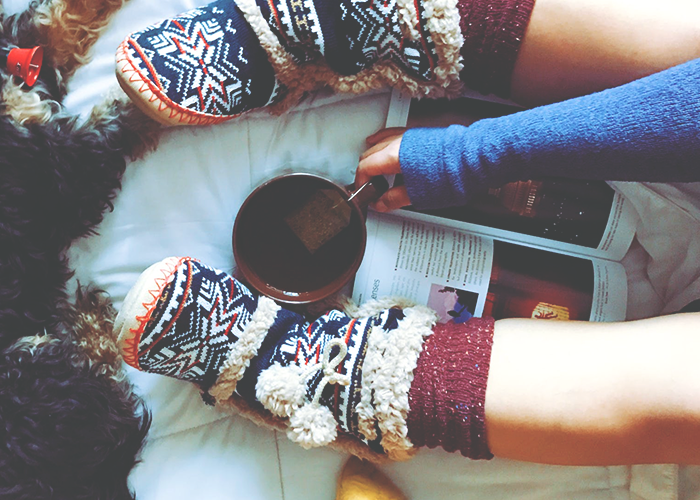 Today, The Financial Diet graduated to its first real office. Not a home office, not even a particularly-well-appointed home office: an office that is totally outside of our homes, which we must walk to and from, which we dress for like real humans in the morning instead of lingering way past the lunch hour in our leggings and hoodies. It’s an extremely exciting moment for the whole team, but there is definitely a special sense of “Oh my god we fucking did it” from Lauren and I, who have been slowly building The Financial Diet since we had other jobs, since it was just a personal budget Tumblr, since she was driving in from New Jersey to Brooklyn and racking up parking tickets while she spent the nights at my apartment so we could get more done.

When you work on the internet, there can be very little that feels tangible, particularly to family and friends who mean well but have essentially no context for the majority of what we do, or our metrics of success. And a lot of those concrete moments have come this year — our book, coming soon, is real and tangible. Going on tour is tangible. But a real, live office that we lock up every night — that might be the most tangible thing of all. It gives a patina of realness to everything we have been working on full-time for the past two years.

Beyond that, there is something doubly rewarding about the fact that we have reached this place — profitability, steady growth, a real idea of what our company will look like a year from now — without compromising so much of what made us want to start. We’ve never had an unpaid intern, we’ve never sold out to the many questionable forms of income that seem to dominate financial media (you’ll never see us shilling for a credit card that is secretly giving us kickbacks to casually mention them in a review, for example). We have done our very best to always prioritize editorial, to put out a high-quality video each week, even when the first year and a half producing them had us and our (incredible!) production team operating at a loss.

In many ways, it has been working with people like our production team, and in admiring similarly ethical businesspeople (these guys are basically the only business writers I’ll read), that we have learned who we are. When Lauren and I entered into being small business owners — like most people who go from “idea” to “creating something sustainable with that idea” — we didn’t know what our version of business would look like. And I feel infinitely grateful that we met companies like these early on, who taught us that there was a way to do things that might be slower, less flashy, and less immediately satisfying, but which would ultimately be so much more worth it. And as our profile has grown, and as we have been offered opportunities to trade in a lot of our ethics for not-insubstantial sums of money, it’s been a wonderful feeling to say no, and to mean it.

Media is an incredibly fickle industry, where finding the right streams of revenue that don’t force you to compromise what you value while paying you enough to live can feel like an impossible goal. Luckily for us, as I’ve discussed before on the site, our ability to diversify our streams of income (combined with being a niche company who happens to cover a particularly-monetizable subject) has in some ways spared us from that. But every day we are presented with options for the quick-and-cheap road, and it’s not always easy to resist them. We generally do, though, even if it means not doing what we’d like to do when we’d like to do it (it’s likely we won’t be able to add our second weekly video until January 2018, at best).

All of that to say, if you are someone who has thought of doing something on your own, professionally, I can say with full confidence that it is possible, even if it will not look exactly like what you thought it would. And I would be lying if I said it doesn’t require a serious amount of privilege. As I’ve said before, Lauren and I were able to wait out some of the dry times and forego income when needed because we could afford to, period. We both have partners who could pick up the slack on the monthly bills, even if it put some of our personal goals or lifestyles in a serious pinch. Even if your version of “getting something off the ground” means living with your parents for a while to eliminate most living costs, that is still a huge privilege in itself.

Put simply, getting almost any small business or freelance career off the ground requires the finances to support that transition, no matter where it comes from. You can start off at a full-time job, but at some point it is very likely that you will have to take the plunge on your new project before the money is there to cushion you. If anyone tells you that they have “bootstrapped” their small business — and most people will, because it’s a self-aggrandizing narrative that people love to repeat — you must understand what “bootstrapped” really means. It means very little if anything directly invested in their company, but it doesn’t mean that nothing was invested in themselves. We are as close to totally ground-up as a company can be, financially, but someone was allowing us to throw ourselves into it before we were taking a regular salary. That is not nothing.

We know how lucky we have been to have these opportunities, to have connected with the right people at the right times and to have formed the perfect team of five that has allowed our growth to feel measured and sustainable and joyous, rather than a constant strain. And while we have definitely lost our share of sleep and felt the crushing weight of possible failure like any entrepreneurs have, we have also learned that the road is only as difficult as you make it on yourself. Our constant, intentional choices to grow slowly and do only what we could truly afford has meant that we are never chasing after a curve that is constantly rising off the edge of the chart.

We could have stretched ourselves super-thin and moved into this office earlier this year, and it would have looked great, and given us all that instant rush of accomplishment and changed scenery. But it would have been a hollow victory, because we would have spent every subsequent month unnecessarily worried about how we were going to pay our rent while paying for everything else. And that is something we are just not willing to do, now or ever. Because we are not a “startup,” we are a small business. We are interested in the quiet, sustainable growth that makes for a good life, not the needlessly-aggressive, falsely-inflated growth that makes for a good press release. And that is how we will always operate.