The Unexpected Benefits I Got From Doing The Whole30 Diet 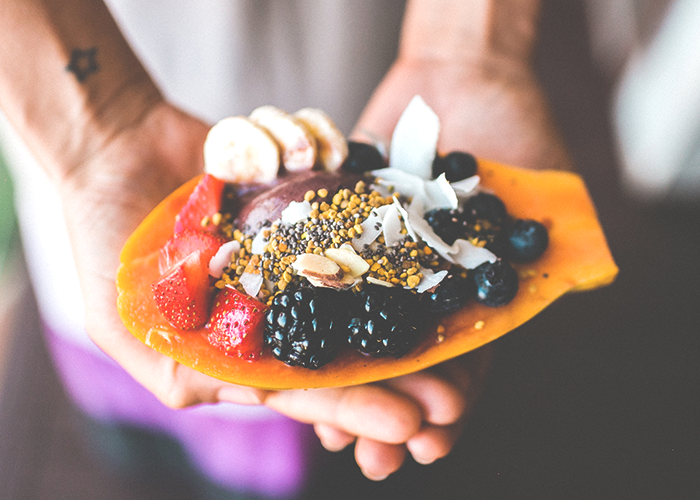 A lot of people start the Whole30 diet

at the beginning of January; I was one of those people this year. I envisioned myself slimming down — It always seems like people lose 11 pounds! That’s a lot of pounds! — and I envisioned myself being energetic during one of the two totally insanely busy times in the year for my job. I envisioned missing pretty much every food I love, because bread and cheese and legumes and sugar and alcohol…well, those things figured really heavily in my eating habits.

Whole30, for those whose friends haven’t been doing it off-and-on for years, is a 30-day program aiming to change habits of eating. Some people truly do it for that reason, and then stick with a Whole30 most of the time, or even a Paleo lifestyle

. It involves radically eliminating sugar and sweeteners (aspartame, honey, anything other than pure fruit) from the diet, including added sugars in practically every processed food. It also cuts legumes (so no peanuts or beans), grains (main starches allowed on this diet are potatoes and sweet potatoes), and dairy. The 30 days of strict dieting helps a lot of people eliminate potential foods as allergens or irritants, and many others discover they have sensitivities to foods that they’d been eating for years. Others do it as a “reset” button for the new year, which was my plan; I’d gotten into a rut of bad eating, and was realizing that making really good food choices for a month would lift my spirits.

What I didn’t think, though, was that my mind was going to de-fog in a way it hasn’t in years. Whole30 made me noticeably less anxious, so much more productive, and ready to tackle the world in a way I don’t know that I’ve ever felt before. I recognize placebo effects, and I know a diet doesn’t have to be that restrictive to produce good effects for people, but this is the one that worked for me. I just didn’t know quite how much, until it was over.

Let’s face it: Whole30 is a lot of deprivation, unless leafy greens, fruit, and meats are just naturally the food groups you gravitate toward. So, during the Whole30, I saw myself as constantly wishing for those foods that made me happy, even as I was, quietly, enjoying the food I could actually eat. I noticed, on the side, that work wasn’t getting to me as much as usual, and that I was energetically plowing through to-do lists, but I was also always thinking about…cheese.

It wasn’t until after Whole30 that I realized just how much it had affected me. I eased myself back into some of my favorite foods faster than the diet plan recommends. I was sluggish, caught every cold that came by in the beginning of February, and felt completely overwhelmed by work. I realized, just in these past few days, that I’m going to have to make a really grown-up decision.

Now that I know how much better I can feel, I cannot go back to a lifestyle of non-stop pizza, nachos, and fried things. Before, I was the “girl with the iron stomach,” and I had somehow not noticed that it made me vulnerable, miserable, and generally held me back. I waited for a whole month to be able to get at my forbidden foods again, and I’m about to introduce a new way of living that basically keeps me on that diet plan.

I’m thinking about it as “Whole5” — I want to aim for rigid participation in Whole30-approved food during the week, since most of those meals are meals I control myself. On the weekend, to free me up to socialize, I’ll relax the rules a bit. There are also things about the Whole30 I’ve decided just don’t matter enough to me: I won’t pay four extra dollars to buy the bacon with no sugar at all in it, or skip dressing on my salad at a work lunch, because none of the choices are Whole30. Still, it does mean back to those sad lists of no’s: no cheese, no grains, no sugars.

Since TFD is all about the finances of the situation, I’ll also say this: I did save money on the diet, as far as my husband and I can tell. We basically stopped eating out, and we cut out alcohol, so that cut the socializing budget. This was offset by eating more expensive food (meat, especially no-sugar-added meat, is expensive!) and just generally buying more groceries, because we weren’t eating out. Near as we can figure, we saved about 40% of our previous food-alcohol-restaurants (which, for our household, was about $300!) by switching to Whole30 for a month. I couldn’t believe this number, but we do typically eat out a lot, and by the end of the month we were good at picking out whatever nuts were on sale, aiming for the bruised produce when it was available, and buying meat in bulk and splitting it into freezer bags. While I am sticking with this diet longer-term because it is so helpful for my mind, it seems that I may get a wallet windfall in the process!

I’m learning that by the time we are in our mid-to-late twenties, we’re making decisions that are not so fun; they make us feel like we ourselves are less fun! I am also realizing that, just like the discipline to save rather than to spend, the discipline to eat well enough to feel bright, energetic, and active is just another exercise in delayed benefits, all of which are so much better than the momentary pleasures. This isn’t a lecture; we all already know about how we should delay gratification. I’m saying that 27 is becoming my year of finding joy in the delays, finding ways to appreciate that I am changing in ways my personality wouldn’t allow me to change in the past. Whole30 eating is restrictive and difficult and not for everyone, but for me, it has become a modified lifestyle choice that makes every day a little less hard to get through.