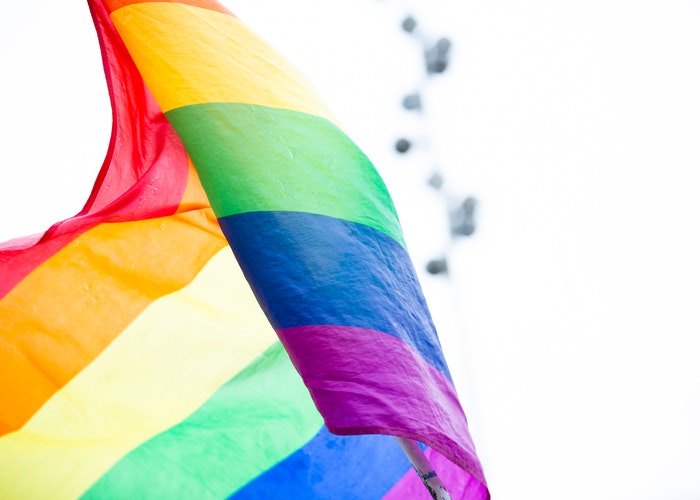 Physical pride parades may be canceled this month due to COVID-19 safety precautions, but there are plenty of ways you can support the LGBTQ+ community, give back, and even participate in events. You can first start by checking out these remote Pride events you can attend all month long from your living room. After you’re done adding these to your Google calendar, let’s move on to the next point, because it’s a really crucial one.

This Pride Month, of all Pride Months, is especially an important one — with the recent events around police brutality and the fight to end racial injustice, the LGBTQ+ community has made a firm stance to join in solidarity with the Black Lives Matter movement. In fact, Pride Month’s origins actually go back to the Stonewall riots against police violence in 1969, and those were led by queer people of color (such as Stormé DeLarverie, Sylvia Rivera, and Marsha P. Johnson). It’s a time for all of us to come together and fight for justice and battle against oppression.

You can also make a monetary contribution that will help important organizations continue to educate and provide resources to folks who need it most. Here’s a list of just some of the orgs that you can contribute to this month to make a change.

This org, according to their site, “works to increase the scale and impact of philanthropic resources aimed at enhancing the well-being of lesbian, gay, bisexual, transgender and queer communities, promoting equity, and advancing racial, economic and gender justice.” If you’re especially looking for a space that wants to increase the resources given to queer people of color, Funders for LGBTQ Issues is working hard to do so, stating that in “2014, foundations awarded nearly $19 million focused on LGBTQ communities of color in the United States.” (These are the site’s most recent stats.)

The Trevor Project is one of the largest organizations that provide resources for LGBTQ+ youth. In a recent blog post, the org provided some important information on how to support Black queer youth in particular.

This group is the “largest trans-led organization” with a mission to “change law, policy, and attitudes so that all people can live safely, authentically, and free from discrimination regardless of their gender identity or expression.” Their programs include the Black LGBTQIA + Migrant Project, the Disability Project, and Positively Trans.

Live Out Loud is an LGBTQ+ youth advocacy group based in New York. Live Out Loud aims to ” inspire and empower students by showing them that they have the potential to lead positive, open, and fulfilling lives.”

The GLSEN organization believes that “every student has the right to a safe, supportive, and LGBTQ-inclusive K-12 education.” The org is made up of a national network of educators, students, and local chapters working together to implement their mission.

The LGBT Foundation provides a variety of services that include hotlines and resources for domestic abuse, legal surgery, sexual health, substance misuse, and more.

The HRC is the largest LGBTQ+ org in the nation and has over three million members. HRC is committed to providing the LGBTQ community a safe space, and provides resources and tools for topics such as adoption, parenting, religion & faith, and workplace matters.

True Colors United is specially working toward ending the homelessness of LGBTQ+ youth. According to a recent study, per the website, LGBTQ+ children and teens are 120 percent more likely to become homeless than non-LGBTQ+ youth, which is why True Colors United’s mission is to work on solutions to combat this scary statistic.

This civil rights org is dedicated to “the empowerment of Black lesbian, gay, bisexual, transgender, and queer and same gender loving (LGBTQ/SGL) people, including people living with HIV/AIDS (PLWHA)” and working toward abolishing racism, homophobia and HIV/STI stigma.

10. The Association of LGBTQ Journalists

This org supports the news and media industry to promote “fair and accurate coverage of LGBTQ issues.” It also helps combat workplace bias and gives tools to professionals who want to foster a safe and mindful work environment.

What to read if you want to learn more about the LGBTQ+ movement and queer experience (non-fiction and fiction):

1. The Gay Revolution: The Story of the Struggle by Lillian Faderma

6. Equal Before the Law: How Iowa Led Americans to Marriage Equality by Tom Witosky

9. In the Dream House by Carmen Maria Machado

10. Another Country by James Baldwin

11. The Right Side of History: 100 Years of LGBQ Activism by Adrian Brooks

12. Stand By Me: The Forgotten History of Gay Liberation by Jim Downs

13. Beyond Magenta: Transgender Teens Speak Out by Susan Kuklin

Happy Pride Month, everyone. Although we must take this time (and all the times) to fight injustice, cruelty, and ignorance, we should also celebrate each other’s strengths and passions. Let’s do our best to fight the good fight and remain optimistic about the future because the two go hand-in-hand.