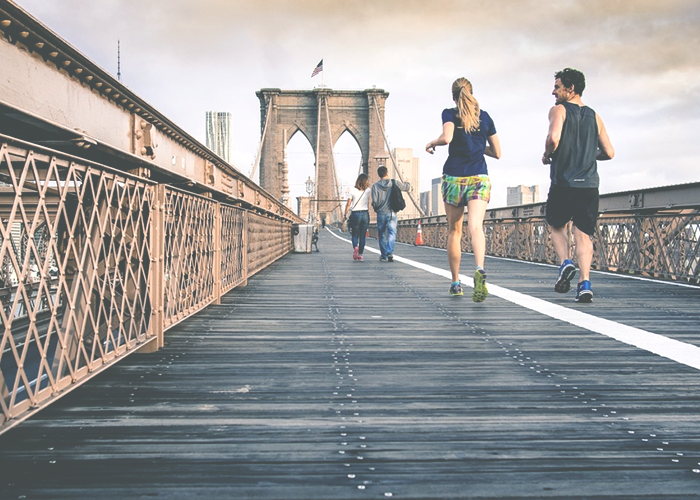 I attended my first real yoga lesson in college through a program where students could pay to be part of a gym and take various kinds of fitness classes. I can’t pretend that the experience was eye-opening in some deep spiritual way, but I did enjoy it enough that I took another yoga class the next semester. As a runner, I’ve found that I need and enjoy yoga in much the same way I need and enjoy running, as a way to move my body and quiet my mind. But because yoga most often times is expensive to partake in, if I had to worry about financing it, it would ruin the feeling of freedom and release that it gives me. So I’ve learned to enjoy yoga on-the-cheap using the following methods:

Classes offered through your institution or gym. I did this in college and it was a great introduction to yoga. When I lived in New York and had a membership to Crunch gym I got back into yoga at a hippie (hip-opening) yoga class that helped ease the sore muscles the day after my long runs. Even after I stopped training for my races, I would still go to this class and then I started going to another class taught by a wonderful instructor who introduced me to the spiritual aspects of yoga by having us focus each class on a specific subject derived from Bhagavad Gita or other yogic texts. She would conclude each class with an illustrative story. If you already pay to use a gym or attend a school, try each class out to see if the instructor is a good fit. You don’t need a studio to practice satisfying yoga.

Donation-based studios. Every city has at a studio that offers at least one free or donation-based class a week. A word about etiquette with donations: in studios that don’t make a big deal about donations or ask for a specific minimum outright, you can get away with taking a class for free. But, because good karma is pretty entwined in the whole yogic philosophy, you should donate if you can. Yoga teachers don’t make much and most studios operate just from those donations so the guilty feeling of keeping your $5 may not be worth it. I’ve had great experiences or heard rave reviews about the following places.

– Yoga to the People. YTP has studios in several major U.S. cities and offers donation-based classes. They have varying packages but the suggested donation is $10 and mats, towels, and water are available for a fee. If you go, be sure to bring your own mat (you can find them online for $20) and get there early to ensure a spot.

– Brooklyn Yoga School. When I decided to leave my consulting job to travel before grad school and cancelled by gym-membership to save money, this brownstone-based one-room studio was a godsend. I initially paid $5 or $10 dollars per class, but when I was unemployed it really put the F in fun-employment. I remember those unemployed days fondly, when I would wake up, dress for my day in yoga pants, walk two-blocks to the studio and practice for free with a wonderful instructor who played the harmonium while she made us sing, “Om.” I went so often that I still remember most of the routine.

– Yoga District (Washington DC). I have friends who taught yoga in DC and love this place.  They have a $5 suggested donation per class as well as sliding scale fees and alternative billing arrangements.

Groupons or other deals. I have sampled Nashville’s best yoga studios with Groupon, Amazon Local and Living Social deals. In Nashville, I paid $25 for a 5 class pass (the same as I would have paid for community classes) and I paid $30 for 30 days (by far the best deal I’ve ever gotten at any yoga studio) at another studio. Although these deals are often limited to a month it can be a great way to start doing yoga a few times a week and to sample new styles and instructors.

Free public yoga. I know that some larger cities, like New York, offer free yoga in public spaces. It’s been done in Bryant Park and Times Square. Information about these events can often be found here, on your city’s website, or by subscribing to certain email newsletters.

Lulu Lemon: This store is pricey but the fitness classes it offers are free. There was a pop up shop in my Brooklyn neighborhood where I went to classes and they even offered some in Prospect Park. Check their website to see if there’s a local store.

Labor for Yoga. Many studios offer arrangements where you can work for them for a certain number of hours to get free yoga classes. Yoga District has a system where you give them six hours of work a week to get free classes. I know friends in NYC who had similar labor for yoga arrangements. The work is pretty standard—washing towels or mats—and even if a studio doesn’t advertise a specific program you can always ask them. Since yoga is such an egalitarian activity most places will probably be open to making arrangements if you can’t afford the donation fee.

First-time discount. I’ve practiced yoga at some of New York’s most exclusive venues, including Yogaworks’ fancy Soho location (I even saw Evan Rachel Wood!) and the Exhale Spa at the Gansevoort Hotel, thanks to first-time customer discounts. You can find such deals by contacting gyms or studios directly or subscribing to certain email newsletters (like Vital Juice). Even if it’s only one time, it’s a good way to try out yoga if you’ve never done it or to shop around until you find a place you like.

Community Centers and Libraries. Several towns offer free or very cheap yoga through libraries and community centers. The classes are usually more low-key but and geared toward beginners, if you are new to yoga or prefer a more slow-paced practice they can be a great resource. Check your local parks and rec center or library pages for more info.

Even if you don’t live in NYC you can most likely try at least one or two of these options in your hometown. If you end up loving yoga and want to drop $100 a month at Yogaworks then knock yourself out but don’t let the price of designer yoga pants make you believe that only the upper crust of society can afford to practice it.

Emma is an attorney who moved from NYC to Nashville for law school and decided to stay.  She will never again live North of the Mason-Dixon line or pay more than 1/3 of her salary in rent.  Follow her blog or her Instagram.