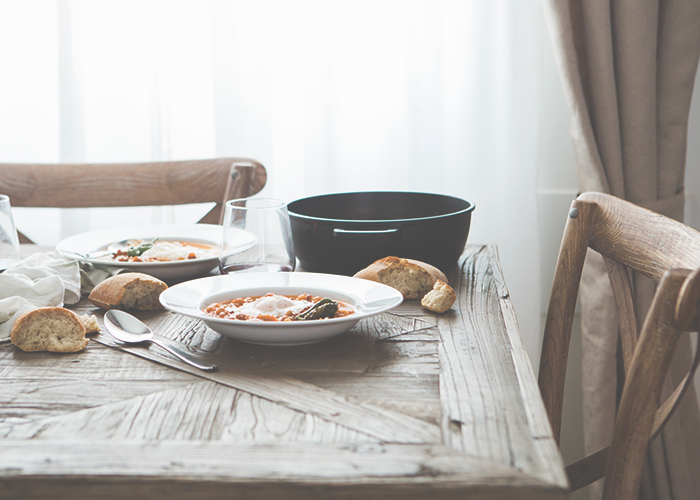 For a long time, my attitude toward all things organic, free-range, and grass-fed was “ignorance is bliss.” As long as I didn’t know exactly what pesticides were coating my peppers or what kind of corn mash had been pumped into my steaks, I was fine. And then I had to go and take a class called “Environmental Chemistry and Toxicology.” It shattered my ignorance forever.

However, I took that class in college (from which I just graduated). I am now working a job that pays only slightly above minimum wage. In other words, I don’t have enough money to buy everything — or even most things — organic, free-range, or grass-fed. So, instead of buying all-or-nothing, I did my research and figured out which foods are most important (for health reasons) to buy organic, in order to stretch my meager dollars as far as possible. Many of my decisions were based on the Environmental Working Group’s Annual “Dirty Dozen” and “Clean Fifteen” lists of produce. However, you will note that I only have eight foods on my personal “dirty” list. While I may have abandoned the notion that ignorance is bliss, I still recognize that beggars can’t be choosers (all of the time, at least).

According to the EWG, when the U.S. Department of Agriculture (USDA) performed its annual testing of over 6,000 produce samples in 2014, more than 98% of the strawberries, peaches, nectarines, and apples tested positive for at least one pesticide residue. Some samples of strawberries contained residue from seventeen different pesticides. I don’t even use even close to seventeen products on my face, so I sure as heck don’t want that many on my strawberries.

In that same study, the USDA found that potatoes had more pesticides by weight than any other produce tested.

One sample of sweet peppers contained fifteen different pesticides, and while hot peppers were not on the EWG’s official “Dirty Dozen” list, they do explain that hot peppers are a cause for concern due to the specific types of chemicals used on them. One of these pesticides, chlorpyrifos, has been banned from use on most produce, and the EPA is currently proposing to revoke tolerance for its presence in any food residue. (I’ve already revoked my personal tolerance for its presence in my mouth.)

Again with the chlorpyrifos! Many of the same, extra-bad pesticides found on hot peppers are also used on leafy greens (spinach, arugula, watercress). But really, if you’re already eating kale…aren’t you someone who buys most of their produce organic, anyways?

Just like sweet peppers, one sample of grapes had residues from fifteen different pesticides. And a scary thought just occurred to me — what does that mean for wine?

15 Foods on Which to Save Your Hard-Earned Money

Lovers of guac and avocado toast, rejoice! The USDA only found detectable pesticide residue on a measly 1% of avocados, the lowest for any type of produce tested. The other fourteen members of the Clean Fifteen were sweet corn, pineapples, cabbage, frozen sweet peas, onions, asparagus, mangoes, papayas, kiwis, eggplant, honeydew melon, grapefruit, cantaloupe, and cauliflower. None of the produce in this list had more than four types of pesticides present (and large percentages of these foods had zero trace of pesticides!).

Of course, there are lots of different varieties of produce out there, so neither of these lists is truly complete. While they summarize the foods that I consistently buy (or don’t buy) organic, your own lists will vary based on your monetary means, as well as how concerned you personally are by pesticides.

And finally, a brief note on those organic-adjacent labels: free-range and grass-fed. Beyond “certified organic,” the USDA does not regulate labels on food. Free-range generally means that an animal was given outdoor access, and grass-fed means exactly what it sounds like—that the animal was fed grass, rather than corn or ground up bits of other animals. Be careful about terms such as “cage-free” for eggs or chickens. Cage-free chickens may have never actually walked outdoors. Also, chicken meat and eggs are more likely to be designated as “pastured” rather than grass-fed.

If you are concerned primarily with animal welfare

, then you would want your meat and dairy to be from animals that are both free-range and grass-fed — or free-range and pastured for your eggs. But if you, like me, love animals but also love paying your rent on time and want to stretch as much nutritional value out of your groceries as possible, you would be more concerned with the grass-fed (or pastured) portion of the label.

I learned — in my fateful “Environmental Chemistry and Toxicology” class — that grass-fed products have far more of the omega-3 fatty acids that we need to balance out all of the omega-6s that our diets are likely already full of. Omega 3 fatty acids

may play a role in prevention and treatment of chronic conditions such as coronary artery disease, high blood pressure, arthritis, cancer, and other inflammatory and autoimmune disorders. (Not to mention, butter from grass-fed cows is the epitome of decadence.)

Now, go forth and conquer the aisles of Whole Foods, Wegmans, or your other neighborhood supermarket…without dropping an entire paycheck!

Rachel is a recent college graduate who prefers coffee over tea, chocolate over vanilla, wine over beer, and cats over dogs. She tends to spend her time reading, writing, and worrying, all of which she can be found doing at Way Of The Worrier and on Twitter.