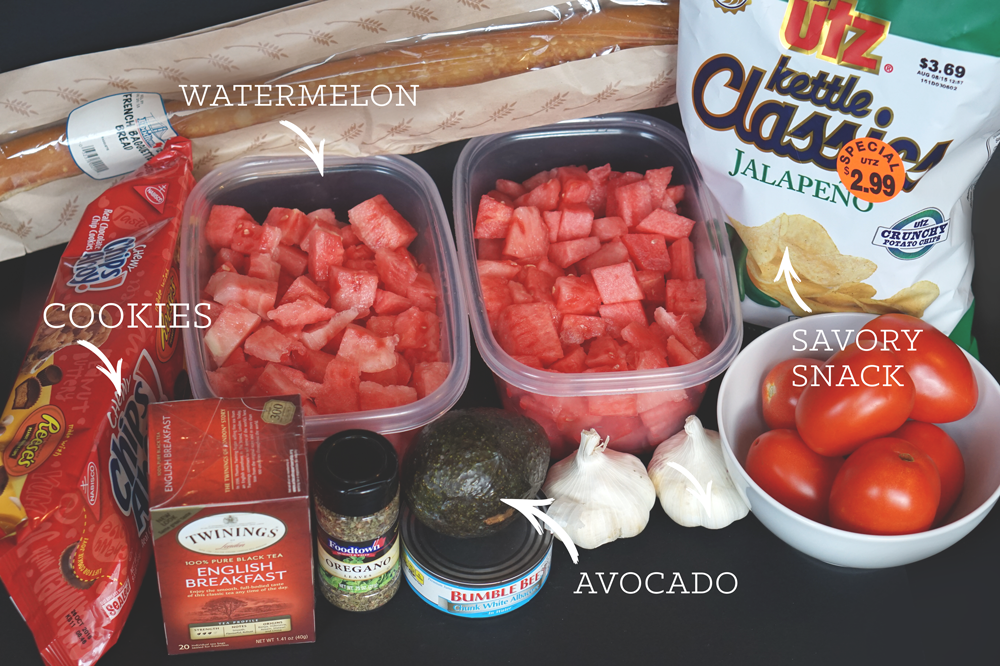 This week’s grocery haul was all about something we haven’t really done yet, for whatever reason — shopping on sale. While before we usually focused on the Get A Shit Ton of Produce strategy, which is quite effective, we thought it was time to look at all the non-produce stuff we could get if we used our store card to its fullest and picked up the things that were on special this week. This allowed us, among other things, to get a good amount of snack foods that we’d normally avoid (some cookies, yummy kettle chips, and a baguette were our carby indulgences). With the exception of the watermelon, garlic, oregano, and tea, everything was on sale. While buying non-processed is, generally, less-expensive, focusing on sales is a great way to include your nibblies at a price that doesn’t make you feel guilty about the purchase.

Also, a note on that watermelon: it came out to about seven bucks, but it was probably the most bang-for-your-buck item we’ve gotten so far in this series. We have watermelon for dayz now, and are going to integrate it into several recipes, as well as just eat it out of the tub (and that’s awesome, too, because it is ripe and sweet as hell). We’ll be posting our watermelon-and-haloumi salad this week, along with possibly a watermelon-based cocktail later on. What else can we do? We basically have 10 pounds of watermelon just hanging out in our fridge now. 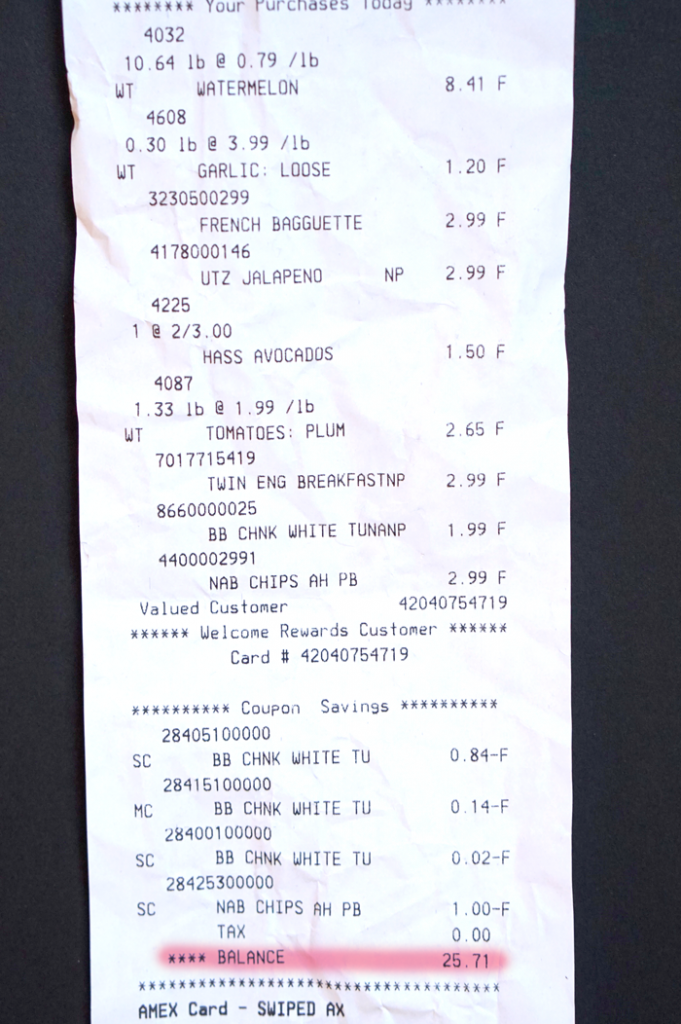 But today’s recipe is distinctly melon-less, and serves as a great example of “making something in bulk and turning into several things as the week goes along.” We put together Chelsea’s Nana’s Tomato Salad — brought with her from Naples, no less — and put it to three distinct uses. 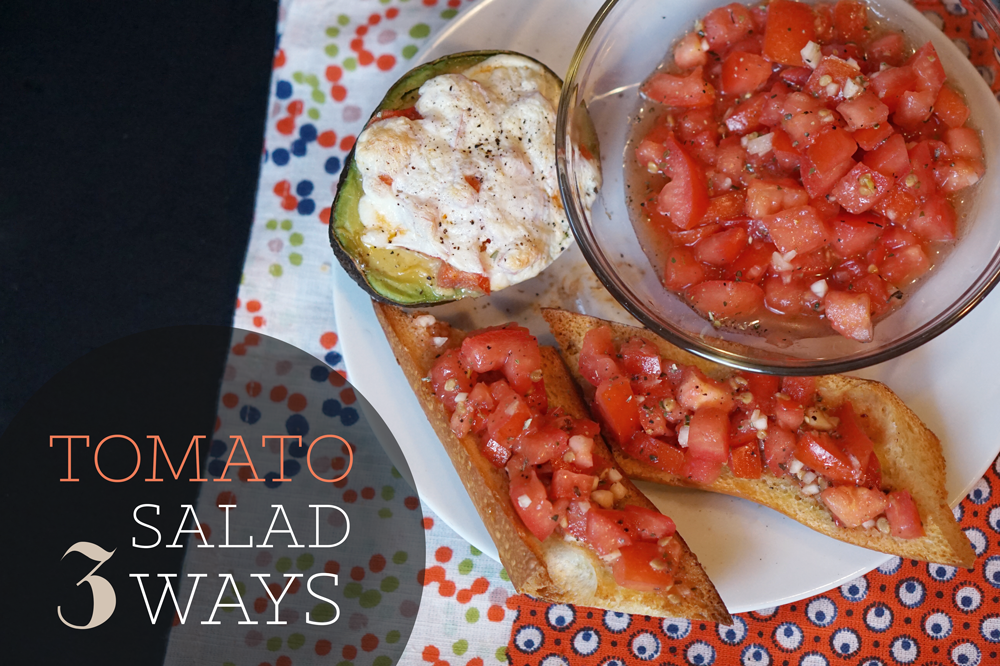 The secret to this tomato salad being so good is its simplicity — some good olive oil, fresh garlic, and a little herbs and seasonings. If you focus on good tomatoes, the work is really done for you. And as Chelsea’s mom will remind you, you don’t want to put vinegar in a tomato salad, as the tomatoes are already quite acidic themselves. The garlic provides a nice zing, but there’s nothing overwhelmingly sour about it.

To make it, you will need: 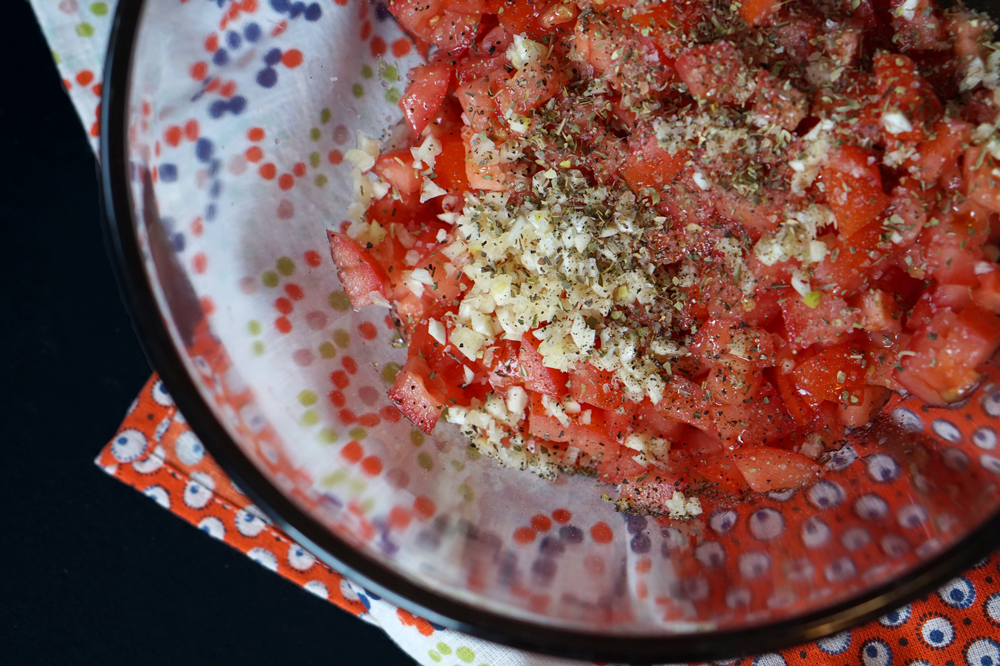 All you do is stir together the ingredients in a large bowl and let sit for at least 15-20 minutes so that magnificent juice (perfect for sopping up with crusty bread) can form at the bottom. One of the difficult things in relaying old family recipes is that you really just kind of eyeball it, and you might need to make it once or twice before you get the exact proportions you like, but the flavor of this tomato salad is good enough that you’ll want to make it a staple for your summer meals. To that end, we prepped it three different ways, as a simple side dish, a bruschetta, and a nice little avocado meal, perfect with a side salad for lunch.

For the bruschetta, simply drizzle a slice of crusty bread with olive oil and toast it in the oven until golden-brown, then heap on some of the tomato salad and spoon over a bit of juice so that it can gently soften the bread. And for the avocado, simply stuff the center with the tomato salad, cover with some fresh mozzarella (or cheese of your choice), quickly broil it in the oven until bubbly, and sprinkle with fresh cracked pepper.

Note: cooked avocados tend to take on a very specific taste that is different from fresh ones, and a bit bitter, so proceed with caution on the last option unless you know you like the taste of warmed avocados, which some people do.

This tomato salad is also great tossed with some fresh pasta, served over grilled chicken, or in pretty much any other format you can think of. It embodies all that is great about southern Italian cooking, as well as summer cooking in general — simple, fresh ingredients, prepared well, that give you tons of flavor without weighing you down. 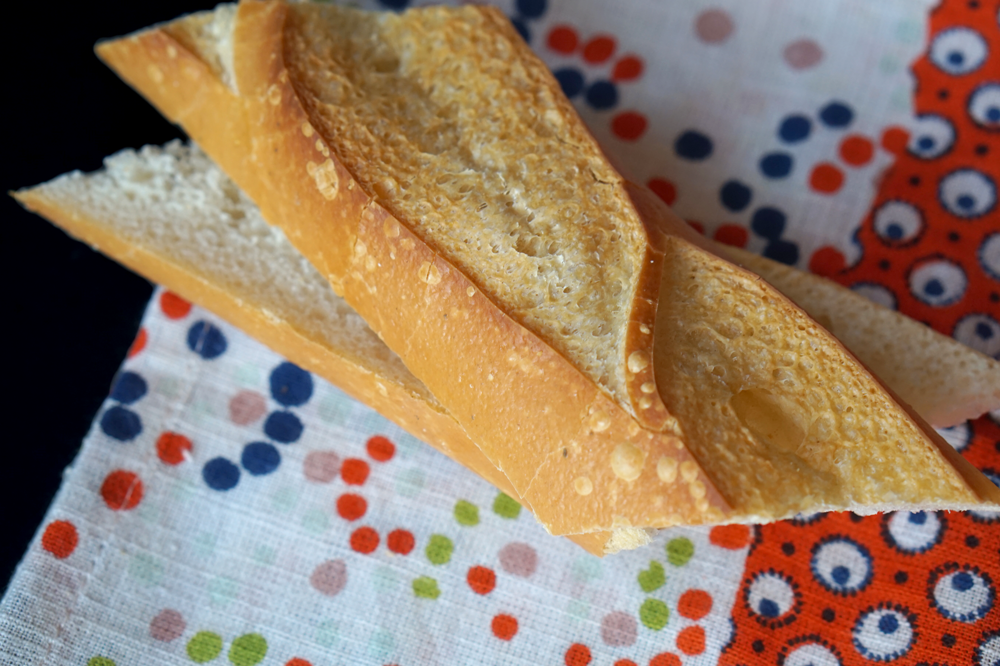 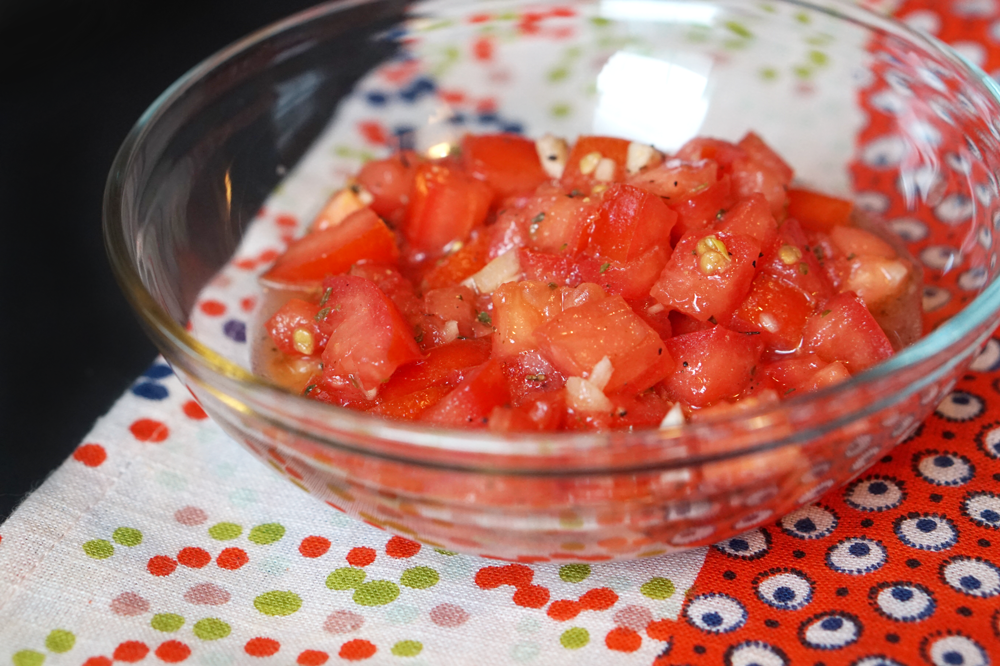 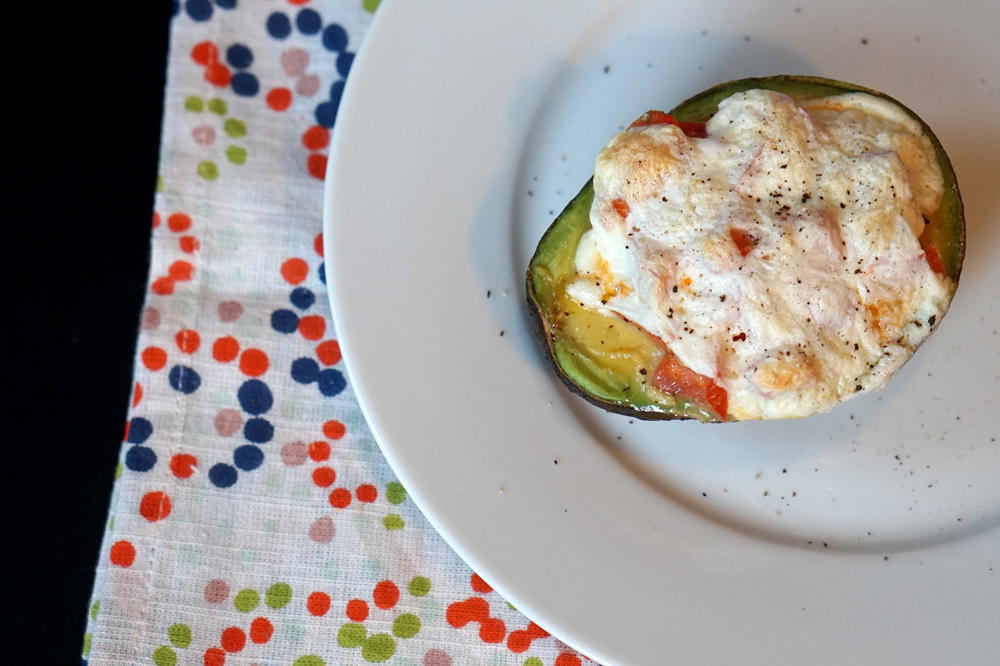 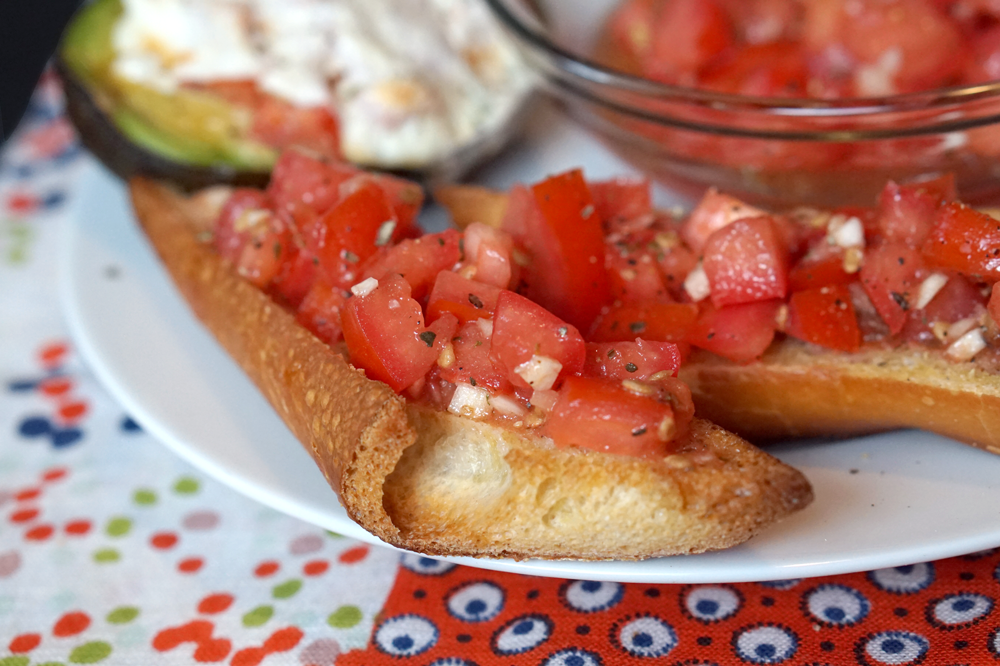 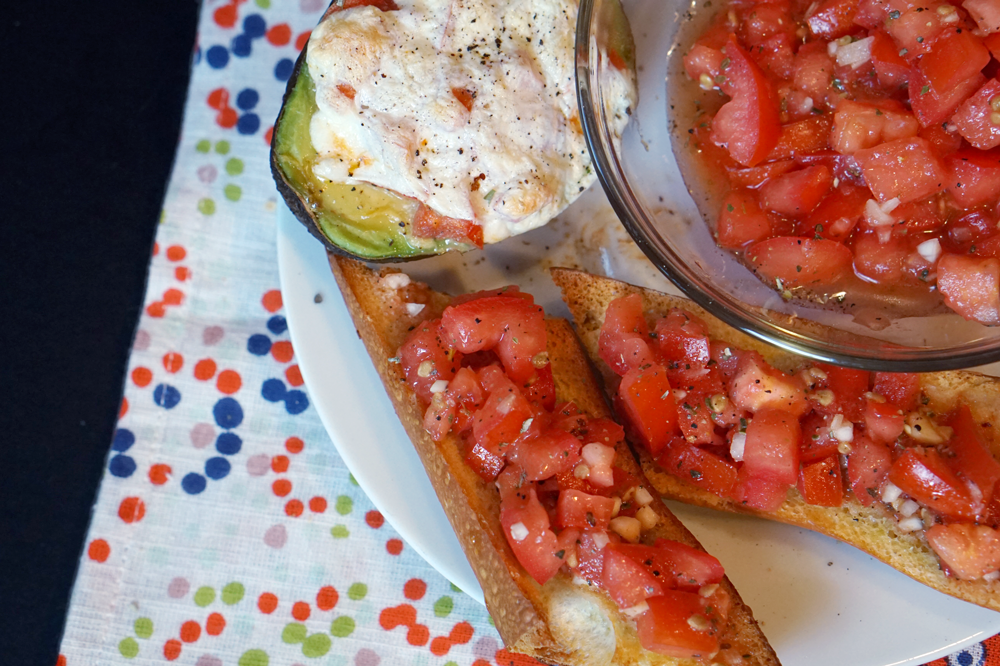