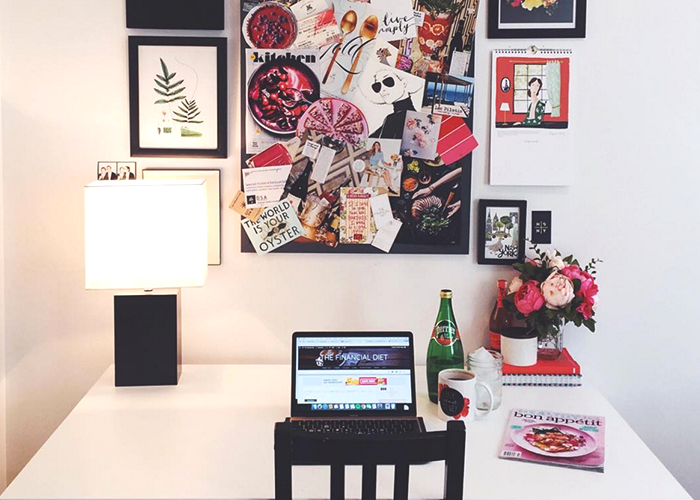 As I write this, I’m sitting in my new office (pictured above!), in my new apartment, in my new neighborhood. (Well, I moved like 15 blocks down the street, but that put me technically in a new neighborhood — Morningside Heights.) I’m here as a result of a series of rather-distressing events, disappointments and misunderstandings and things falling through after being counted on maybe a little too vigorously. A lot of things happened in a very short span of time, and there was a week-long period in January where I was visiting upwards of seven apartments per day, slogging through the freezing rain as I walked into a unit, saw that each window looked out at a brick wall so close you could touch it, and walked out.

Because of that dedication and some serious broker-shopping, though, we ended up finding a place that I truly feel we will be happy in long-term (hell, we signed a two-year lease, so we had better be happy here for a while at least). It’s spacious, well laid-out, bathed in light and gorgeous pre-war molding, and has a kitchen that can only be described as “The Very Adult Kitchen Chelsea Often Dreamed Of.” This apartment is not the one we had planned on living in — and I won’t lie, there are definitely things about it that are a downgrade — but there is also a lot we love even more.

We’re a block from Morningside Park, a ten-minute walk to St John’s Cathedral and Central Park, live on a quiet and tree-lined street, and find the mild inconvenience of being surrounded by Columbia students is far outweighed by the beauty of being surrounded by Columbia architecture. I feel very at peace here, and even though we still have much to do in terms of setting up our home (we haven’t even painted our bedroom yet, let alone replaced our bed with one that actually fits in the room), I feel a huge wave of relief and comfort when I walk through the door.

Out of necessity, every apartment I’ve lived in until now has come with a huge asterisk: in Paris, I had almost no money, so my choices were inherently very limited. When we moved to Williamsburg, we had almost never been to New York, and picked the first apartment we found based almost exclusively on its proximity to my office. Our last apartment was good for what it was, but was based far more on creating a viable office space for TFD than it was for our living space. This has been our first apartment that does not feel in many ways like a compromise, which accommodates the three NYC-based TFD team members but is not dominated by the office’s presence. It is a happy, calm place that Marc and I (and Mona!) all feel very at home in.

And in the spirit of reflection, I’ve come up with a list of the simple truths about making a home I’ve learned after a lot of searching, moving, and creating my ideal space.

1. Know which rooms really matter to you, and which don’t.

It took a long time (and several missteps) to figure out that having a truly great kitchen is extremely important to me, and having something like a big, beautiful bedroom is not. My bedroom can face a wall, can be just big enough for a bed and a nightstand, can be an utter afterthought in every way — I couldn’t care less. A bedroom, for me, is for sleeping and almost nothing else. And I have lived in several apartments with great bedrooms, or in which the bedroom torturously has all the great lighting, and the living room is a dingy cavern. Do not waste your great windows or ample square footage on a room you are never in — save it for the rooms that matter. For me, the trade-off of a rather small bedroom for a great kitchen and well-lit living spaces was more than worth it. I practically live in my kitchen, and love having one big enough for several people to cook and hang out in at once. That is where my resources go, apartment-wise, and it’s never been a mistake.

2. Get creative about budget decor.

Over the past few years (and few apartments), I’ve gotten pretty creative about how I decorate, and have found a lot of ways to make spaces I feel are beautiful with very little money. There are little things, like subscribing to a stunning magazine like Bon Appétit, which I can read, cook from, and then use for things like wall decor, whether by putting beloved cutouts on an ever-changing office inspiration board, or framing beautiful images in places like a gallery wall. And then there are “get realistic” choices, such as deciding the right mix of fresh cut flowers, potted plants, and faux bouquets. Finding really nice-looking fake flowers

(those are some of my favorites, especially because real peonies are so goddamn expensive) and some easy-to-maintain potted plants means you get the feel of one of those gorgeous homes constantly full of fresh flowers and greenery without having to hemorrhage money on several bouquets each week. Then there are the big things, such as using beautiful wall decals

to fill up a huge space without having to spend a ton of money on things like framed prints. (I used to have an entire wall of those very decals, and it was definitely the thing in that apartment that felt the coolest, and got the most compliments. :)) The point is, thinking in terms of “how can I achieve the look I want within my means,” and not simply lusting after an idealized image of it, is key.

I have learned over the past two years especially that just because you are living in a rental does not mean you cannot alter the space to fit your needs and desires. The most noticeable place this happens is in the kitchen, for me: that means things like changing the cabinetry (those were an ugly maple color) through paint, contact paper, or temporarily replacing the doors, adding a backsplash, adding things like a pot rack

, rolling carts for extra surfaces, and putting in shelving wherever it’s lacking. A lot of people treat rental units as just, “Welp, this is what it is,” and don’t consider the incredible amount of improvements that could be made — particularly if you are planning to be there for a long time, it’s worth talking to your landlord about what more permanent upgrades he or she might be okay with, if they will make a big difference to your day-to-day life.

4. Remember that you will want to clean the space you love.

Here’s the deal: the more you love a room — the way it looks, the way it’s decorated, the way it’s laid out — the more you will want to keep it cleaned, organized, and a place for productivity. If you hate a room, you will not care that it turns into the garbage and chaos receptacle for the rest of your home. To that end, make each room feel as good as it possibly can in terms of aesthetics, because that will translate to every aspect of how it is used and maintained. Your home should be the Get Shit Done space, not a sad physical extension of all your worst attributes and habits.

If you have a small space with limited storage, you better go vertical and shelf the hell out of that thing. If you have a kitchen with little functional counter space, you better find creative ways to add surfaces, even if that means a pull-down one mounted on the wall. If your bedroom is the room that gets all the light and the walking space, find a way to put your workspace in that room as well to maximize it, instead of cramming it into an area that’s depressing to work in. Follow the light, follow the form and shape of the space, and make the most of what you actually have on your hands. Too often we spend our time lusting after what feels like “the apartment we should have” at the expense of ignoring the apartment we actually have. And the sooner you accept that you have to live in your home, and make it into the best and most beautiful version of itself, the sooner you will be happy. We may never live that West Elm catalog dream, but we can create the nest that feels happy, warm, and beautiful to us.