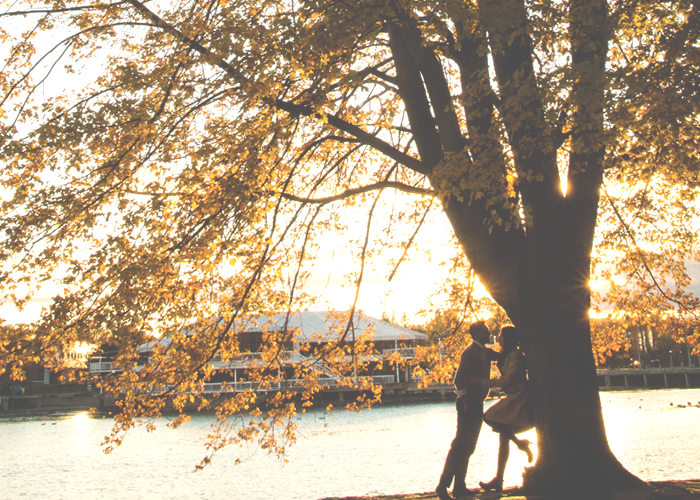 When you’re on a date, every choice feels symbolic: which dish did she order? Did he pull out her chair and open the door for her? Did she interrupt my story? Will he admit out loud that he likes all-Adele

soundtrack of this moody café, too? Humans are hardwired to read into vocal intonations and gestures; to sift through personal anecdotes and connect disparate dots to satisfy curiosities and suspicions; to craft nuanced, compare-and-contrast diagrams of which values you share — and don’t share — with your date.

If we’re already so adept at calibrating the value of ~murky~ social norms and practices (“I’m a feminist, but I do like that he opened the door for me…and it seems like he did it out of consideration, not condescension!”), then it makes sense why we place such importance on more readily-quantifiable things (ahem: money) when we’re on a date. Some women like to feel financially “taken care of” on a date, while others appreciate the show of financial independence that comes with splitting the bill. (If you haven’t read them already, the two pieces I just linked — which present strong but very different cases for money in relationships and dating life — make for a great one-two-punch read.)

When I was younger, I did get a rush from going on dates with men who picked up the check. I was allured by the novelty of it; I was amazed at how closely the curious power exchange followed, almost word-for-word, the third-date scene that I’d watched in countless rom-coms as a child: the guy reaches for the bill, the girl politely but half-heartedly refuses, the man insists, the woman acquiesces. I’d been coached to look forward to this “classic” moment of heterosexual dating my entire life, and in the literal sense, it lived up to my expectations. The script, in real life, was a carbon copy of the script on screen. After a while, however, the rush wore off. I certainly appreciated the gesture of financial care, none more so than when I was struggling to make ends meet with my part time work and side gigs.

But, as I aged and became more aware of how much emotional sway finances hold in an intimate relationship, I grew uncomfortable with the imbalance. I began trying to assert myself in the payment process — and many men were happy to “let me” cover my fair share of the check. That said, I learned there were delicate (and not so delicate) ways to push for this parity. My worst “money move” on a date? I quite literally jumped in front of my boyfriend of the time (who insisted — insisted — on paying for absolutely everything) to order movie tickets from the booth. I shoved my card through the slot before the booth worker had even printed the tickets (because I knew my boyfriend would give me back my card and handle the expense, if given the chance). We were all a little surprised — me, my boyfriend, the ticket guy — and I made a mental note: maybe…don’t “Incredible Hulk” your way to financial independence in a relationship.

1. “I went on a date to the movies once with a guy who said to me while we were in line to buy tickets ‘I know you’re a feminist, so I’m not even going to try to pay for your ticket.'” — Marianne

2. “She paid for an incredibly large bill but then left close to no tip — it was the worst ‘money move’ I’ve seen because she laid down the dollars to impress me, but not to honor the fantastic service we’d had that night. It was a terrible indication of moral judgment, and a signal of how different our values were — she prized monetary arrogance over human decency.” — Lea

3. “Recently, I went on a date from Coffee Meets Bagel. We had a few drinks, and the guy proposes we go to another bar. I ask for the check, but before the words are fully out of my mouth the guy practically screams ‘TWO SEPARATE CHECKS, PLEASE.’ He wanted to split the bill item by item (my wine was probably one or two dollars more than his beer). The waitress was as shocked as I was, by the expression on her face. Disclaimer: I always always offer to split the bill. But I think most normal people in this society wait for the check to arrive, and then throw two cards into the payment. Asking (read: screaming) for two separate bills ahead of time, though?! Eek.” — Rachel

4. “I once went on a really ill-conceived blind date with a friend of a friend who, as it turns out, was a borderline crust punk whose interests included biking, not shaving or cutting his hair, talking really condescendingly about consumerism, and not paying for things. When the check came at our Vietnamese restaurant, not only did he immediately take the check and start breaking down every item individually to calculate exactly how much we owed, he made sure to specify that I owed $4 more because I had gotten a cocktail instead of a beer. When I was a few dollars short and realized the place was cash-only, he sat there and waited while I walked to and from the ATM about five blocks away. I never saw him again, obviously, but he did introduce me to what is now one of my favorite restaurants in the city.” — Jessie

5. “He said he was taking me out for a treat. I’m a total bookworm, so when he drove me to Barnes & Noble, I was super excited. Before we got out of the car, he turned to me and said: ‘go ahead and buy yourself any book you can afford.’ We’d been dating for six months at that point.” — Kathleen

6. “It was college (oh, college) and I’d been seeing this guy for a semester and a half. He said he wanted to take me out on the town…which, in our town, waaaay upstate, meant the P.F. Chang’s in a strip mall. But I couldn’t wait! Got all dressed up. We sat down to dinner, and I was looking over the menu excitedly, wondering aloud what I should order. ‘The lo mein, maybe? Or chicken?’ He turned to me and said sternly: ‘Pick one. You only get one thing.'” — Nell

7. “When I was a freshman in college, the very sweet lady whom I babysat for had heard that I was single and ‘looking.’ She kindly (but SO awkwardly) set me up with a fellow undergraduate, who also knew the family. He took me out for sushi, and (maybe because he was nervous? I don’t know) ordered, like, ten rolls. Expensive ones! I sat back (and wondered how he was going to afford all this, because he’d already said ‘on me!’). Then the bill came. He blushed, his eyes popped out of his head, and I felt so sorry for him that I offered to help with the bill. It took a big chunk out of my wallet.” — Erica

8. “I was once on a date where the guy made a comment after I ordered my steak about it being the ‘pricey cut’ that he’d never tried, so he ‘hoped I would like it.’ It came off as aggressive, and even the waiter paused a beat before resuming his friendly countenance. It’s one thing to think your date might have ordered an expensive meal, but quite another to say it. I felt like: ‘buddy, you know you’re going on a date out to eat! Suck it up and shut up, or else why did you bother taking me out?’ I don’t understand…if people can’t afford to eat out because money is tight, that’s fine with me. We’ll simply pick something else to do, like catch a movie or meet for a drink. Don’t be a jerk about ordering something I want…especially if YOU chose the restaurant.” — Em

9. “I was studying abroad in Paris, and I met a really kind, chatty French guy at the airport. He invited me to join him for dinner. We agreed to meet that weekend, and he texted me the address where he’d be waiting for me. As I made my way through the new city, I was puzzled by the neighborhood he’d suggested…it was entirely residential, without a restaurant in sight. I didn’t realize until I was in front of his door that he’d invited me to his apartment. Thank god, he wasn’t at all dangerous (looking back, if he had been, I would have disappeared without a trace), just awkward as all hell. We sat on his beat-up sofa in front of a 12″x14″ TV, eating boiled pasta with canned tomato sauce. It was…heartbreaking. And so uncomfortable. If you’re broke, just invite your date for a walk in the park!” — Zoe