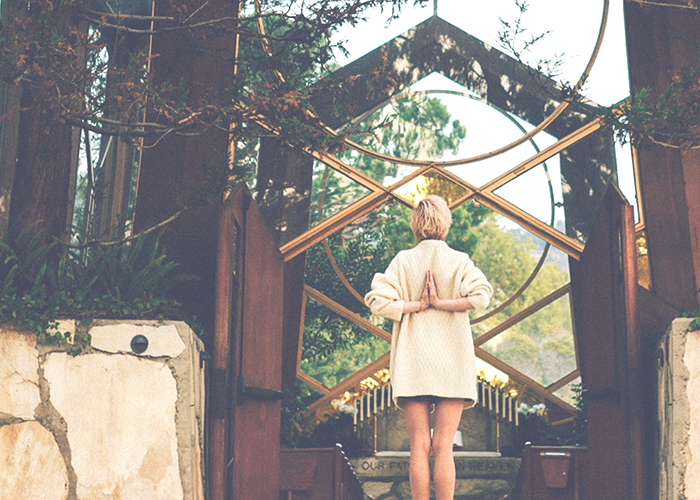 Ok, so I didn’t rename myself “Unfolding Lotus” and become an apologist for energy crystals (“they actually DO help you lucid dream, guys!”). But when I was working a 9-to-5 job, I took my lunch break early, hopped on an express train that carried me thirty blocks in two minutes, and attended an advanced-level vinyasa yoga class for an hour and 15 minutes. Every. Weekday.

There were a number of reasons that I decided to make this a regular habit:

1. Money. The monthly membership fee for my sanga was cheap AF. (Sanga is Sanskrit for “community” or “meeting.” Wait…is that the sound of…your eyes rolling? Keep a tally — this won’t be my last usage of a Yoga Chick word). While other yoga sangas (go ahead, roll) cost $25 or more for a single class — which comes out to paying upwards of $130 a week. My sanga (QUIET) cost $90 for a month of unlimited classes. When I did the numbers, I realized I was paying $22.50 a week; that came down to $4.50 per class when I went five times a week.

2. My back. Oh, my back. It’s been a long journey, just my lumbar and me, dragging ourselves stiffly into the sunset. I’ve inherited one of the Fun Family Traits, and since the age of 20, I’ve had regular spats of chronic pain and multiple muscle spasms that laid me out flat for days at a time. At 22, I was attending twice-weekly physical therapy sessions for deep tissue massage (which sounds relaxing; it is, if you find someone applying their full body weight to your pressure points relaxing). My physical therapist suggested that I begin doing yoga to strengthen certain muscle groups and thereby “stabilize” my back. The more yoga I did, the more my back pain and tension receded. I learned about “homeopathic remedies” (SILENCE, YOU) from one of my teachers, who had also struggled with back problems. Epsom salt baths (with a little tea tree oil, the signature scent of every yogini…I KNOW, OK?) do natural wonders for muscular tension and inflammation. Also: foam rollers, people. Worth the $10 at Sports Authority.

3. My sanity. My office job was a solo-pilot situation. I worked in a department of two people: just me, my boss, and…three, really, because my lumbar has an evil mind of its own. My boss was often away from the office, being a badass professor, poet, and arts administrator, so I worked alone most days. Part of this was lovely (read unlimited reams of poetry and set your own schedule) and part of this was rough (extroverts + prolonged solitude = sad face). Getting out of the office, onto the street, and into my sanga (DEAL WITH IT) full of other enthusiasts — who attended so regularly that we all became friends — provided a much-needed infusion of human interaction during the day. Plus…the effect of 10 minutes of guided meditation, five times a week, is substantial. Hot DAMN sitting still is hard. And good for your soul.

So — before I throw down some serious hippie sh*t — you have a concrete idea of the sweet budgetary deal I was getting for a vast improvement of my physical and psychological wellness. I should also add that, at the time I began practicing yoga on a daily basis, I was mad skeptical. I harbored a secret suspicion — as I do with most organized “spiritual” activities haloed by a faddish fog of humblebrag-strewn mass participation — that all this hatha-breathing (YUP) and lotus-sitting (SURE) and deep core-activating (AKA, a thinly-disguised Kegel-Fest) was a bunch of bull.

Some of my suspicions never abated. To wit: a glassy-eyed substitute yoga instructor once full-on love-ranted about how “all women share bright green heart crystals that bind mothers and daughters together…LET YOUR HEART CRYSTAL SHINE THROUGH YOUR BIRTH CANAL OF LIIIIIIFE.” Then she tried to push me over during Warrior Pose while making jokes about the ever-escalating divorce rate. Clearly, girlfriend was going through some sh*t. The yoga regulars and I giggled about it in the bathroom afterwards. I am having a fresh giggle about it right now.

But, aside from these brief, comical forays into Angry Yet Earthy Exorcisms Of Bad Vibes In Search Of Manic Positivity, I fell in love with yoga. The overwhelming majority of my yoga teachers were genuine, measured, disciplined, non-evangelistic practitioners with extensive professional training in physical therapy, dance, nutrition, and movement. They took care to never present their methods as replacements for medical attention; they offered meditation and Sun Salutation sequences as sustainable compliments to other means of self-care. I listened attentively as our instructors pulled out detailed acupuncture diagrams and traced various Qi pathways to explain how different muscle groups are influenced by Qi flow. I memorized the different Zen Elements (Fire, Water, Wood, and Metal) and how yoginis should organize their movement sequences around these Elements (for example: Fire focuses on core strength, so a “Fire sequence” of yoga would involve a lot of poses that require you to engage your abs — think Pilates-like planks and sit-ups. Or, just ROLL YOUR EYES). Though I never fully espoused my sanga‘s Zen Medicine principles as irrefutable medical fact, the incredible improvement of my health served as a constant reminder of how attuned, holistic, and physiologically nuanced Eastern philosophies of the mind-body connection are. Of course your agitated mental activity is going to affect the tension (and thereby, wellness) of your body. Le duh.

I realized that Western medicine practitioners (my physical therapist, for example) were arguing for the same mind-body connection practice. In Western speak, a discussion of your Qi pathway blockage would look like this: your sports medicine practitioner pulls out an anatomy chart and says, “Your blood circulation is cut off here, here, and here by muscle tension; the lack of blood flow is making your muscles even weaker and more tense. Here are three stretches you need to do every day.” They were targeting the same muscle groups and “pathways” by suggesting similar stretches, exercises, and relaxation techniques; doctors and physical therapists just use a different vocabulary to discuss bodily wellness.

Most importantly, I realized that — before my immersion in vinyasa yoga — I had been living as a classic Western asshole: without any personal experience or intellectual understanding, I had dismissed another culture’s philosophy as nonsense and believed in my own culture’s philosophy of medicine with an unsubstantiated sense of superiority.

After two years of practicing yoga fives times a week, I quit my office job and moved to a new neighborhood. With my sanga over an hour’s ride away, my attendance gradually tapered off and I eventually discontinued my membership. I do think my body experienced an (albeit mild) withdrawal; my muscle tension reappeared with its old force, and mental freneticism rushed in to fill the void that my daily meditation practice once occupied. I missed seeing my crew of other yoga folks every day. It was a sad time, but it pushed me to adopt personal responsibility for my fitness; I began exploring the wide world of Youtube yoga. To this day, I look forward to throwing on a 30-minute guided practice and busting out my mat for some deep breathing. Once you go yoga, you don’t go back.