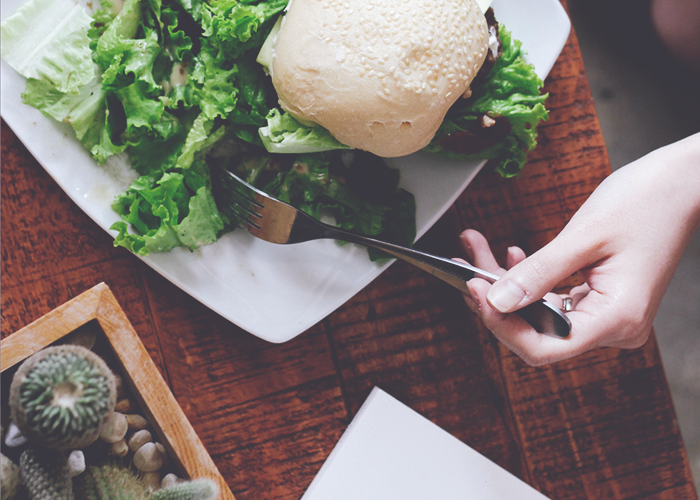 Everyone has strategies to make their groceries cheaper. If you are a coupon clipper, a person who shops in bulk, or a person who chooses vegetarianism to avoid expensive meat, you know some of the biggest tricks for grocery shopping well. It seems that some people benefit from these suggestions, and others don’t because coupons aren’t their style, or because there’s no wholesale club nearby, or because they don’t want to give up meat.

My challenge to myself was a bit cart-before-the-horse: I told myself that I wanted to cut my grocery budget in half, without giving myself a single way to do so. I also wanted to continue the healthy eating habits we’d set for ourselves after completing the Whole30 Diet earlier this year. I don’t know if this goal-first, methods-later approach would work for others, but this is how it ended up looking in my life.

By the numbers: Husband and I spent an average of $430 a month on groceries before the challenge. We needed to get the grocery budget down to $215. I succeeded (came in a few bucks under, even!), but not without really examining the way I shop for food. (This book

Looking at the list of suggested foods in my grocery store “shopping planning” application on my phone, I was able to identify some specific things we no longer bought included:

As you can see, this didn’t add up; we didn’t get enough savings from simply “cutting things” to make the $215 happen. Instead, I tried a bunch of mental tricks on myself.

I am a person who really hates to pick something up in a store, and then end up putting it back on the shelf. However, I have no problem adding something to my online “cart” and then deleting it, so the shopping planning app I mentioned earlier was essential before any trip to the store. The prices of things were right there, and so I could dither about whether I wanted something or not, look back at recipes I wanted to use that week, and invariably put some things “back on the shelf” before even entering the store.

Once I was able to plan most of my purchases, the things I wasn’t sure about (i.e. things that might be on sale) got planned in a different way. I knew that I ate too much cheese, and my grocery often has half-priced, fancier cheeses available. So, on my list I end up putting “check for half-price fancy cheese” — if there is one on half-price sale, I can get it, but if not, I will get no cheese at all.

I also wrote “choose two salad veggies” or “choose two stir-fry veggies” or “pick up a starch” — if potatoes, sweet potatoes, pasta, or quinoa is on sale, I can choose that, or if there are some bell peppers in the “less pretty” veggie tray on sale, I have the flexibility to choose those. I always have a plan, but there is wiggle room in it. Before, I tended to put two specific things on the list, and then still grab something else on sale. The result was more food than I really needed!

I made a few rules that help me avoid some of the biggest temptations toward higher spending: I’m not allowed to purchase nuts given their astronomical cost lately, can’t purchase meat that costs more than $1.50 per portion, can’t purchase pre-made frozen foods unless they are on half-price sale or more, etc. These rules don’t work for everyone, but you may note that some of your most common impulse purchases come from a particular need: I often buy pre-made frozen foods that are just a little bit on sale, as “just in case” options, so this pushes me a little and makes me really avoid things that normally pull me in.

I also did something that is totally cheating, and I still advocate it: Just use things you already have. For the past month, in an effort to delay going to the grocery store, I raided the pantry for cans of soup and packages of pasta and anything else that could make a meal. It meant that I didn’t eat quite as many fresh veggies as was ideal. (I still did okay, though, since we’ve got a bonkers quantity of salad greens in our garden. Another excellent way to cheat on a grocery-bill-challenge.) However, canned goods and other staples go bad eventually, so I turned the extreme frugality into a time to rotate out some of those items before they went bad and ended up as food waste.

This obviously isn’t a cheat you can use if you are eating through your cupboards every month; that might be a sign that you aren’t buying too much food, but instead food that is too expensive (or that you are already grocery-store-frugal!). For us, I think we have the problem where, when we see something that we “might” use on sale, we get it, and then save it forever. We needed to stop that for a little while, and I’m betting some of you could stand to do so, too.

All in all, I’m glad I survived the grocery bill challenge. I want to both keep our spending lower than our previous $430 in the future, as well as do the more extreme challenge again at some point, just to get creative again.