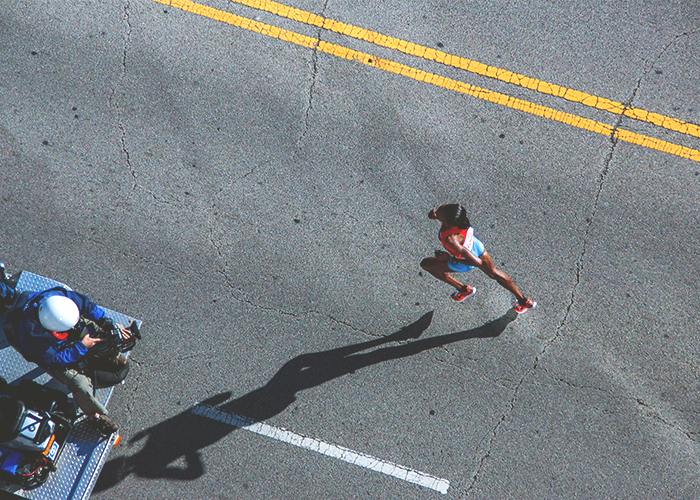 As a child, I was a late walker, taking my first steps at 18 months old. My lack of athletic prowess became more apparent as I grew up: According to my parents — who, in hindsight, maybe should have kept this to themselves — my pediatrician said I would never have much endurance in sports. Instead of using this to motivate me, I used it as an excuse to quit everything I tried — basketball, ballet, even swimming. I was skinny and awkward, and when it came time for the Presidential Fitness Test in grade school, I couldn’t eke out even a single pull-up. My image of myself as a lanky tangle of uncoordinated limbs was solidified.

It wasn’t until college that I stumbled upon my love for swimming. I joined the intramural team, swam in a of couple meets, and even showed a little talent. But I was also in college in Oregon — I smoked, drank, partied, and generally kept an unhealthy lifestyle. Swimming took a back burner. But one day, while living and partying in Hawaii after college, I looked in a mirror and didn’t recognize the ashen, puffy person in front of me. I was done doing this to myself; I wanted to clean up my act. So I entered my first 5K and completed it in 31 minutes.

I soon quit smoking and started running regularly. By the time I was 25, I’d also joined a Masters swim team and was swimming competitively, even winning a few heats. It wasn’t long before I entered my first triathlon, and fell in love with the sport. Twenty-plus years after being told I wasn’t cut out for sports, I was reborn as an athlete. I’ve never looked back.

Of course, all of this has come at some cost. It is often said that you can do your first triathlon with an old mountain bike and some running shoes from Target. While this may be true for a first-timer, if that same first-timer falls in love with the sport as I did, and aims to be competitive, they will soon wear out his credit card. I’ve been a triathlete for 12 years now, and I am finding that the list of items a “mid-career” triathlete must have runs up costs that could bankrupt a weekend warrior.

Last year, I spent $1,100 on a used bike. To many people, that is an obscene amount to spend on two wheels, a metal frame, and some handlebars. After all, one could go to the local Wal-Mart and pick one up for $200. But I am someone who fell deeply in love with one of the most expensive and time-consuming sports in the world. I am a triathlete. That $1,100 bike would go on to save me MINUTES in my races last season. And believe it or not, my used Craigslist find was bargain-basement compared to most “triathlon” bikes, which can range from $2,000 to $20,000 — or more.

The bike is just the beginning. The list of items a “mid-career” triathlete must have includes a sports watch, good running shoes, cycling shoes, a power meter, a bike helmet, and swim equipment.

I kept my costs down because I wasn’t afraid to wait for a bargain. I spent months looking for a bike that met my needs on Craigslist. After years of longing for one, I found a used power meter. I waited for a sale on refurbished models before I bought my GPS sports watch on Amazon. However, the only thing I didn’t cut corners on was running shoes; cheap running shoes could quickly lead to injuries that could end a runner’s career.

When I entered my first triathlon in 2004, it cost me less than $50. Nowadays, that same triathlon is almost $100, and that is just a sprint — the shortest of the triathlon distances. If you are eyeing a long-course triathlon, such as an Ironman event, you are looking at $500-800. Of course, most triathletes do more than one event per season. In 2016, I competed in three short-course triathlons and one half-marathon, to the tune of around $500. I also registered for a 2017 long-course triathlon at a cost of $300.

If I had entered every race I’d wanted to, my family would be on the street. Instead, I focused on a few key races — ones that were in fun locales or promised an interesting course. For out-of-town races, I camped, or stayed with friends, instead of springing for a hotel.

This list doesn’t include the costs of massage, physical therapy, coaching, training plans (if not working with a coach), food (you’ll burn a lot of calories), and “nutrition” — the calories you take in during exercise.

Healthy people spend less time at the doctor — that goes without saying. However, for an athlete putting her body through the ringer, massage, physical therapy (if needed), and a good coach/mentor are items you just can’t cut corners on; if you do, you’ll end up burned out, sick, and injured. Likewise, getting the right food in at the right time is key to letting your beat-up body recover. You’re asking your machine to push the outer edge of its limits; you don’t want to neglect its needs.

Sometimes, doing what you love means sacrificing the things you think you can’t live without. Here are some of the things I’ve cut back on in order to continue competing.

1. Meals out: As a family of four, including two growing kids and two athletic parents who happen to love craft beer, dinners set us back $50-60 a pop. Where we were going out one to two times a week, we are down to once every two weeks. It’s hard sometimes when I don’t want to cook, but I try to keep my eye on the ball.

2. Clothing: Fortunately, we live in a time where athletic clothes are just as cute as street clothes, so I often let my running wear double-duty. I also shop sales online for basic, versatile pieces I can wear to a movie or my daughter’s ballet recital.

3. Books: Between Amazon Prime and eBooks from the library, we rarely pay for books.

4. Gym memberships: You might think a triathlete needs a gym membership, but I have managed to get by without one. I buy a punch card to the local pool for swim training, but the rest I do from home. In the summer months, I am outside on my bike, or on the trails running. In the off-season (fall/winter), I do body-weight exercises in my living room, and break out the bike trainer for HGTV marathons.

5. Free time: I picked up freelance work to supplement my part-time-employee income. My husband works full-time, and while he doesn’t complain about footing the bill for my endless athletic expenses, my conscience can be clear knowing I am putting in extra work for my more self-focused pursuits.

I’ve often questioned why I do this — why I spend hundreds a year to race 3-4 times and earn a few finisher medals, which quickly end up at the top of the closet. I will never be a professional athlete, or even pound the hot pavement at the Ironman World Championships in Kona. Why do I keep opening my wallet?

Triathlon is what keeps me going. It is “my thing.” It is what gets me through a morning of work, knowing I get to run at lunch. It is my occasional much-needed break from the kids. It is what inspires those same kids to get outside and run or ride. It is my social outlet, providing me with dozens of like-minded (OK, borderline obsessive) training partners. It is what provides me with unadulterated, childlike joy as I step on the podium, knowing that it was my hard work that got me there.

Some people spend money on art classes or flying lessons, or season passes at the local ski resort. Everyone has his or her “thing” — that passion that busts the budget. When you have that passion for something, no matter how much it costs, you are willing to sacrifice all those other budget line items to get it.

What is your budget-busting passion? What have you had to give up to pursue it?

Meg is a writer and editor living in Bend, OR, with her two children and husband. When she’s not working or posting on her blog, The Well-Rounded Life, she is outside enjoying all of the activities Bend has to offer.