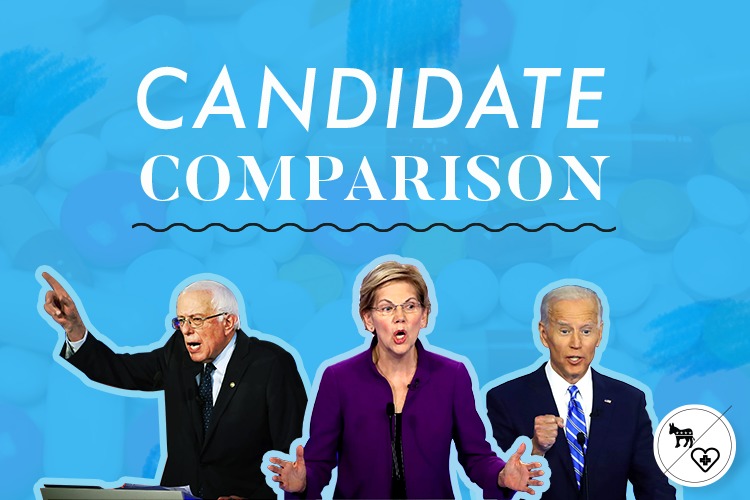 This is a series on the 2020 Democratic presidential primary election. We’ll be breaking down how each candidate in the race stands on a handful of important social issues. Today’s issue? Healthcare. For a quick summary, check out our infographic at the bottom of the post.

Healthcare isn’t just a central campaign issue of the 2020 Democratic presidential primary — it might be the most important one. Several debates have focused on lengthy conversations about healthcare policy. A whopping 35 percent of American voters view candidates’ healthcare policies as an “extremely important” issue in the election, according to a recent Gallup poll. Based on these results, healthcare was the single most important issue to both Democratic and Independent voters. Similarly, other surveys, like this FiveThirtyEight poll from September 2019, have found that healthcare was a top issue for Democratic voters, second only to electability.

So healthcare policy matters to voters, and based on the Democratic primary candidates’ healthcare plans, the candidates know it. Among the field of options, healthcare plans can be broadly divided into two options: Medicare for All and a public option that builds on the ACA.

Before we dig into where each of the candidates stand, it helps to have a little background. Signed into law on March 23, 2010, the Affordable Care Act, or ACA, increased access to health coverage and insured more than 20 million Americans. Despite repeated attempts from congressional Republicans to repeal the ACA during the Obama administration and numerous legal challenges, the ACA still has had a lasting and significant impact on the US healthcare system. For instance, insurance companies can no longer deny coverage to people with preexisting conditions. Fewer Americans avoid receiving medical care due to cost. According to Politico, “as of 2018, six states and Washington, D.C. have achieved over 95 percent health care coverage for their residents” though some Republican-led states continue to have high uninsured rates.

However, the ACA hasn’t solved everything. To date, tens of millions of Americans live without health insurance, and that number rose from 2017 to 2018. Even when Americans are insured, they are often underinsured. Healthcare was a popular issue for Democrats to run in the 2018 midterms because voters care about it. And in the 2020 election, it’s still a central issue. Here’s where each of the remaining Democratic candidates stand on fixing the healthcare system.

Bernie Sanders: Medicare for All

This plan establishes a national, single-payer health insurance system in which the government pays for health services. This would make healthcare “free at the point of service,” meaning those in need of care would pay no premiums, no deductibles, no copays, and no surprise bills. Sanders’s stance on healthcare has remained the same for years: Healthcare is a human right and no one should go bankrupt because they need to go to the hospital.

Under Medicare for All, no American would lack adequate health insurance. Rather than spending huge sums of money on administrative costs and compensation packages for big pharmaceutical and health insurance companies, the government would invest in health professionals, such as doctors, nurses, mental health specialists and dentists, along with the development of innovative drugs and technology to make people’s lives better.

Senator Sanders’s plan has faced much criticism over lack of details on how he’d pay for it. Sanders has responded that there are several ways to finance Medicare for All, and that ultimately, it’s just “a rebalance of how our current dollars are spent.” Citing a recent study, he says the U.S. could save up $500 billion annually alone in billing and administrative costs by moving from private insurance to Medicare for All.

With the ambitious goal to insure 97 percent of Americans or more, Biden’s detailed plan outlines the ways he would build on the ACA. The Biden Plan would offer a public option like Medicare so that if anyone doesn’t like their insurance they have another option. Under this plan, the public option would negotiate with hospitals and healthcare providers for reduced costs. Biden’s plan would alleviate the burden from small businesses that have difficulty affording their employees’ insurance and would cover primary healthcare without any co-pays.

He would also eliminate the 400% income cap on tax credit eligibility and lowering the limit on the cost of coverage from 9.86% of income to 8.5%. In other words, “no family buying insurance on the individual marketplace, regardless of income, will have to spend more than 8.5% of their income on health insurance,” according to his website.

Biden’s plan would extend coverage to more Americans by automatically enrolling certain individuals into a plan if they make below 138% of the federal poverty level get covered. To pay for this, Biden would restore the capital gains tax back to 39.6%, after the Trump Administration lowered it to 20%, which created a loophole for wealthy taxpayers.

Elizabeth Warren: Medicare for All

Senator Elizabeth Warren’s plan on her website stands out because it is, well, really long and seems quite thorough. Her campaign even has a calculator so people can figure out what her healthcare plan would mean for them. In simple terms, Elizabeth Warren supports Medicare for All, but she thinks the country will need a transition period during her first four years in office.

Under Warren’s version of Medicare for All, all of the benefits outlined in the Medicare for All Act, like long-term care, dental, and mental health care would be covered. Warren would give the federal government bargaining power to negotiate the price of drugs and plans to lower administrative costs overall by instituting a policy of comprehensive payment reform. She would also substantially decrease defense spending.

Senator Warren has received criticism that her math on how to pay for Medicare for All doesn’t add up. However, she addresses this concern in detail: Warren has said employers would bear the brunt of the burden by paying what they would normally pay for employees’ insurance to the federal government. On her site, Warren explains that because current system costs Americans trillions of dollars, the difference isn’t that wide, and she would make up for it “with targeted spending cuts, new taxes on giant corporations and the richest 1% of Americans, and by cracking down on tax evasion and fraud. Not one penny in middle-class tax increases.”

You can read more about Warren’s plan here.

Former Mayor of New York Michael Bloomberg supports a Medicare-like public option to expand healthcare coverage, which would be paid for by customer premiums. Simply put, Bloomberg would improve the choices consumers have for health insurance and would lower premiums by increasing competition in the healthcare marketplace. Bloomberg wants to expand coverage by increasing enrollment in ACA plans. If elected, he would cap out-of-network hospital charges at 200% of Medicare rates and ban surprise medical bills.

According to his plan, Bloomberg would expand subsidies to cap premiums at 8.5% of household income. He would also reduce drug costs by giving the Secretary of Health and Human Services the authority to negotiate with pharmaceutical companies. He would protect and expand access to healthcare in rural areas by changing rural hospital payment models, by doubling the federal government’s funding for Community Health Centers and increasing its funding for the National Health Service Corps, and for broadband access in rural areas.

According to Politico, Bloomberg campaign officials said the cost of the plan would be offset by  Bloomberg’s proposals to cap provider payments, allow the United States Department of Health and Human Services to negotiate drug prices, end surprise medical bills and overhaul Medicare’s prescription drug benefit.

For her part, Tulsi Gabbard backs Medicare for All and co-sponsored the Medicare for All Act in the House. Gabbard’s healthcare plan includes utilizing telehealth and remote patient monitoring services and lowering the cost of prescription drugs by “ending government-granted monopolies” for drug manufacturers. Gabbard would pull the US out of “counterproductive regime-change” wars and reinvest those dollars in programs like Medicare for All.

For tens of thousands of Americans, healthcare policy is literally a matter of life and death. Expanding coverage under the ACA ‘s Medicaid expansion saved lives, which is to say nothing of the serious financial burden that such policies can alleviate. Thus, the healthcare plans of the 2020 candidates are crucial factors to consider when casting a ballot for a candidate. 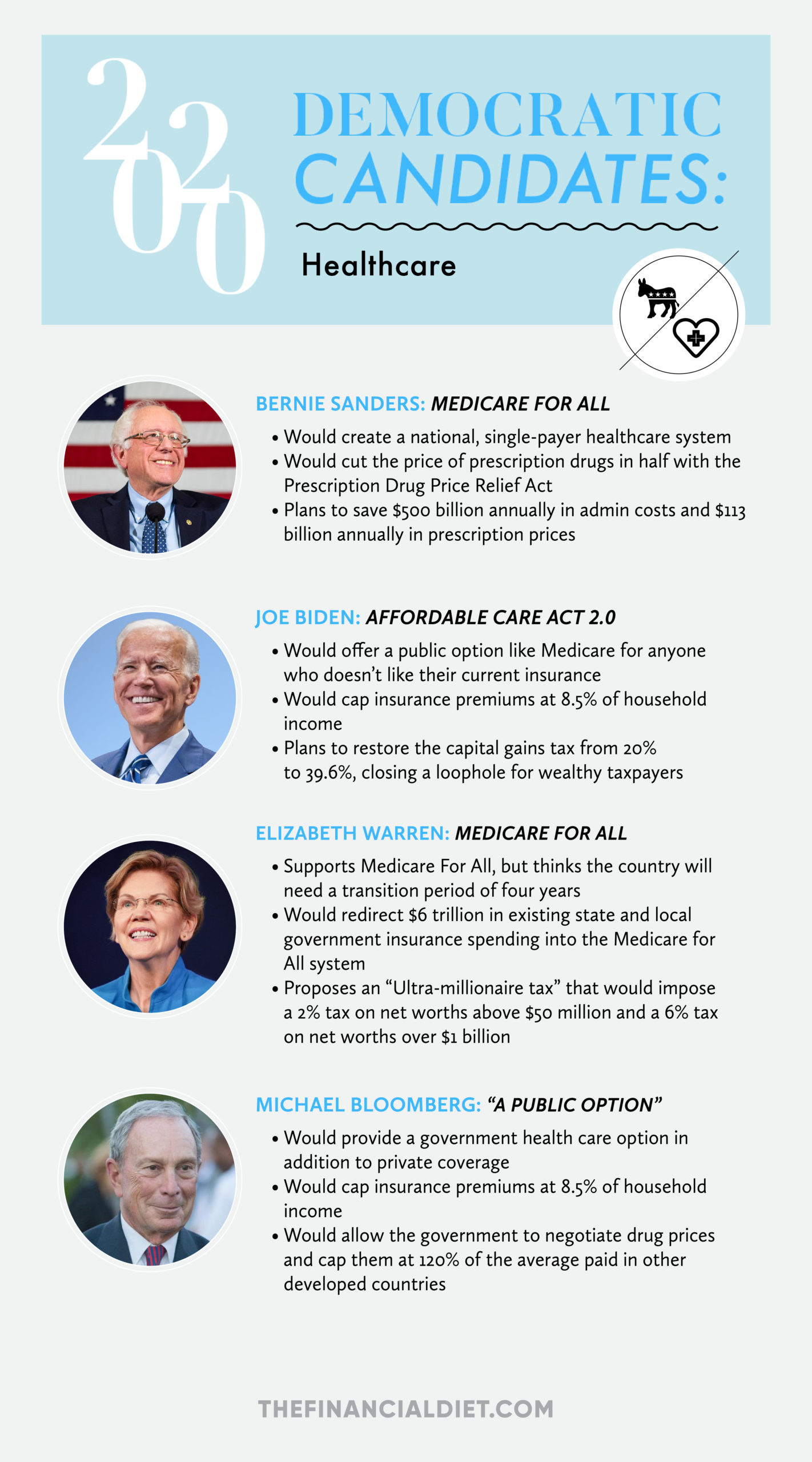