The Money Lesson I Learned From Having Lifelong Problem Skin 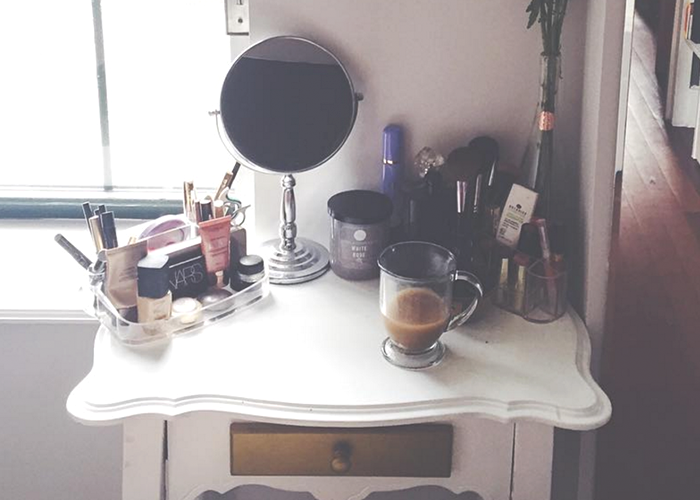 I was reading an interview recently with a well-known actress about her skincare routine (this is a terrible mistake to begin with and I take full responsibility for my ensuing rage), when a line stuck out to me like a slap in the face, as it often does. To paraphrase, it was essentially how she believes “simplicity is best” and generally sticks to a simple cleanser and moisturizer and “drinking lots of water,” because “overloading herself with too many products” is counterproductive. Of course, my first reaction was “absolutely fuck this, I know you are seeing a dermatologist once a month and also getting regular facials and other, more invasive maintenance, as you are a 30-something woman whose attractiveness is a crucial element to her continued success,” but that is to be expected.

All of these fluff interviews in fashion/women’s magazines with some genetically-flawless woman about how her perfection is maintained through broiled salmon, tea, splashing water on her face, and yoga, is simply an act of delusional PR for her and masochism for the reader. We know that these interviews are bullshit designed to make us feel bad and pretend that hundred-thousand-dollar-a-year beauty routines are “effortless.” Fine, that is part of the bargain. But something else struck me in her comments, because I realize that I hear these sorts of ideas from people who are not actresses or models, not getting twice-monthly facials, and not lying about the complexity of their beauty routines. I realized that her comments about “simplicity” are much more universal, and much more tinged with a fake morality than we’d like to admit.

The thing is, women who have inherited genetically-awesome skin — small pores, few or no breakouts, even tone, good levels of natural oils, etc — often speak about their routines in terms of “simplicity,” as if not having complex, expensive routines that alternate actual medication and cosmetic products is a conscious choice, and not a direct result of not needing it. I think that most of us would choose less-invasive, less-expensive options on all fronts if we could, but many of us cannot, and skin happens to be a frequent example of this only because we are led to believe that “good skin” can be the result of pretty much anything other than genetics. Yes, you can make your skin “better” or “worse” through behavior, but ask anyone who has battled lifelong acne, rosacea, psoriasis, or other skin disorders and you will quickly learn: the only “magic cure” is not being born with it.

I notice this disparity, this idea that “effortless” routines are the more desirable route even though many of us cannot choose them, because I have always had bad skin. Expensive treatments and medications and makeup and creams have always been a necessity, if I don’t want my bad skin to be an active distraction. It’s much better now than it was, but I will almost certainly wake up every day and, before I do anything else, check to see if I’m having a “good” skin day or a “bad” one. I envy people who don’t have to think of these things, but I also realize that there are many other things that I don’t have to think about myself. I notice this because it impacts me, but there are so many other daily budget choices in which we conflate “not having to participate” with “making the superior not to.”

For example, if you are battling some kind of illness — mentally or physically — the associated expenses and constraints that come along with them will not be a choice. The fact that many of us don’t pay out of pocket for an expensive therapist or medication each month is not because we’re making some wholesome, Gwenyth Paltrow-style simplistic life choice. We simply don’t have to do it. If we have a job where being impeccably made-up and styled is not a requirement for getting ahead (or even being perceived as a professional), the fact that we don’t spend on fine skirt suits and blowouts and leather bags and high-quality makeup is not some moral victory on our parts: it’s a luxury of not having to do it in order to build our careers. If we don’t have serious food allergies or restrictions, not spending extra money and hassle on a specific diet isn’t something we should be congratulated or emulated about, it’s simply a result of us not having to make those choices. We all have expenses that we can choose to opt out of, and yet delude ourself into believing that anyone who buys into them is simply making a superfluous choice with their money.

One of the things that always turned me off the most about the obnoxious-bro-dominated finance writing community was how much they treated many expenses of life — particularly expenses often associated with women — as something to be immediately skimmed from the top, if not openly mocked. The idea that many women simply don’t have the choice not to invest heavily in their appearance if they want to get ahead in what they do is so often not addressed at all: “silly” things like makeup or haircare or new clothes are almost always the first thing to be tossed into the “cut” category, even though many of us would be viewed as “unprofessional” if we went into the office bare-faced, ponytailed, and wearing old, worn-out clothes.

Life is full of purchases that we may be lucky enough not to have to make, but which are very real for people around us. There is no magic bullet to creating the perfect budget, or the right number to spend on a certain category, or the right products universally worth investing in. There are general suggestions, and certainly we can share what is true to our own lives, but what may be “optional minimalism” for you might be “absolute necessity” for someone else. Acting as though the 20-something who spends $200 a month on skin products to prevent herself from constantly breaking out at the office is being frivolous with her money isn’t just condescending — it’s dumb. We all have to make compromises in order to navigate the world and, whether we like it or not, be perceived in the way we need to to accomplish what we want.

That may be much less expensive for some of us than for others, but at some point, we all have to pay for it.