All The Money I Spent Trying To Cure My Insomnia 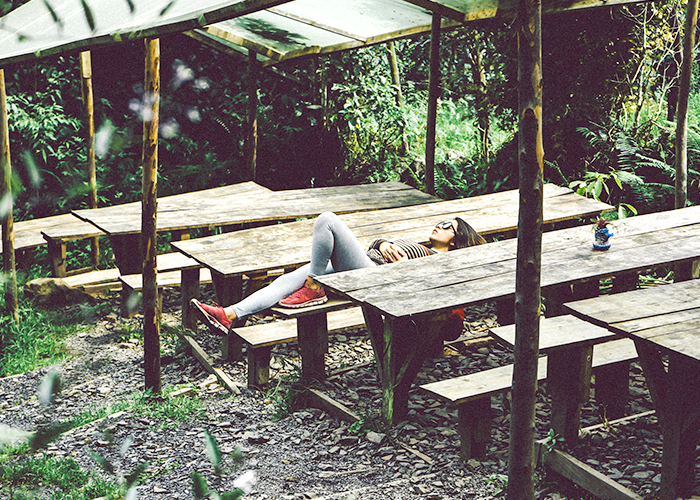 On the first day of September in 2012, I stopped sleeping. My body gave me no warning for this abrupt (and downright rude, in my opinion) physiological change. I went to bed exhausted from a day of moving with my roommate and best friend, Charlie, across Vancouver, BC, from our basement suite off Cambie Street to an adorable apartment above my favorite bookstore on Commercial Drive. When Charlie and some friends went out for the night, I crawled onto the mattress in the corner of my room early, anticipating a deep and restful sleep.

I laid all night waiting. The next day, punchy and bleary-eyed, I muscled through unpacking, visiting with family, and hiking the goddamn Grouse Grind. That evening I thought I surely deserved a long rest for my efforts.

Instead, Night Two saddled me with panic. If I didn’t sleep at all tonight, what would happen to me tomorrow? Would I go crazy? Would I walk around the next day with a puffy face, dough-brained to the world? The terror of what could come hurled my body into a state of fight-or-flight. With my heart throbbing fast and terribly, and adrenaline zipping up and down my veins, everything was on fire. Sleep was very cruelly beyond comprehension.

I failed at sleep again and then again and again. By the fourth morning, with less than an hour of shut eye banked on either side, I was a brittle leaf in the wind; sensitive to the touch, unhinged beyond measure, and chipped on all corners. I didn’t recognize myself.

But I had resources. Charlie was in medical school at the time, and he bore witness to my disintegration. By day five, I was in the walk-in clinic with him and a doctor, crying wildly like a distressed animal. Between the doctor and my unfailingly lovely and supportive best friend, we came up with some options for tackling the beast.

On my path to rest, I learned more about myself than any other life event so far has provided. It altered me in a pointed and meaningful way. Over the course of six months, I waded through solutions. Some came from the doctor, while some came from my faulty, exhausted logic, and most cost me money.

Passing out drunk works, until it doesn’t. Once I was home from the bar, the bottle of wine or five whiskey drinks I had consumed would direct me into sudden and blank sleep, but the next day would always, without question, remind me why it wasn’t worth it. Alongside the mean tang of a vicious hangover, the depressant quality of booze slumped me down deeper into a dark sense of hopelessness.

I bought Deep Sleep with Andrew Johnson for my iPhone based on user reviews and desperation. Both times I tried using it were during the day (nap time?), with the sounds of the Number 20 bus hissing to a stop outside my building. Not even the velvety tones of Mr. Johnson’s Sean Connery-esque voice could pull me any deeper than a mild flirtation with slumber.

When the doctor rambled off a list of possible solutions, yoga and meditation was at the top of her list. This I could do. Yoga is cool and good for you. I signed up for a month unlimited at the studio down the street. My hamstring strength improved somewhat, but my sleep did not.

The most concrete result of my dramatic doctor’s appointment with Charlie was my first prescription for Diazepam, a benzodiazepine commonly used to treat anxiety and muscle spasms. Under the medical plan I was on at the time, I could fill this blue pill prescription cheaply. Over the run of my insomnia, I took around sixty doses of Diazepam, and had a back-up bottle ready for what I anticipated to be the the long and rocky uphill battle to regular sleep. Forever thankfully, I never had to use it. I kept it in my jewelry box long after it expired, though, just in case.

The quality of sleep on this stuff is brutal. You wake up feeling like your head is a fishbowl. But it did permit me sleep. And that shitty, drug-induced sleep fortified the bridge of strength I needed to cross over to get to recovery and resolution. Without it, I don’t know if I would be here today.

I’m the biggest square when it comes to drugs. I had never interacted with a drug dealer prior to losing sleep. But I had a few fond memories of cozy nights in, smoking with close friends, and then getting into a safe, warm bed for the dreamiest rest ever. Willie Nelson smokes weed every day! I figured if it could help me sleep, this would be a lifestyle change to embrace.

I was not in the right mental state to introduce drugs to my psyche. Paranoia coupled with sleeplessness like a pair of evil twins. My mind was stale and discouraged.

Near the beginning of my bout of insomnia, I clung to hypnotherapy with a spiritual fervor. This was what would save me. But at $150.00 (cash, of course) per session, I had no choice but to urge my chosen healer to please expedite the miracle.

The whole situation was bizarre. On the phone, the hypnotherapist reminded of me a motivational speaker, full of tagline sentiments and evangelical sensibilities. To my broken, flagging mind, it was a great relief to talk to him. I went to my first early morning session caffeinated on hope.

My hypnotherapist was broad, red-faced and smiling from cheek to cheek when he came to the door to let me in. His office was in an older apartment building near Stadium Chinatown station. It looked like a staged showroom. The carpets were perfectly tangerine colored and clean. Decorating magazines from 1997 were fanned out on the coffee table. And in what would traditionally be a bedroom, he had set up office with a couch for me to lay on. And lay on it I did.

Over the course of two sessions, he took me into visions of my childhood self. He believed somewhere in my old memories lay the trauma that had suddenly kept me from sleeping. So we searched for over two hours. I went back to a couple times in my life where I was small and felt abandoned. I held her in my mind and told her it was going to be okay. I cried and asked for it to be over. After both sessions, I left feeling alive. But I never got to sleep.

My first hypnotherapy session was exhilarating and motivating. I wanted to grasp the world by the face and kiss it all over. So I skipped right into Club Monaco on Robson Street and dropped a bunch of cash on cashmere blend leggings. Two pairs, in black and blue. Because that’s why you do when you know you’ve only got one life to live, right?

Oddly, this natural sleeping aid was the most nightmarish to experience of all my solutions. It truly rocked my world the first night I tried it, sending my head into a spiraling, anxious stream of consciousness. Melatonin works for people who are not desperate for sleep, but simply wish to regulate it. That was not me.

I really wish I could go back to that girl I was and soothe her.

Cute, but ultimately did more for my pores than my bedtime.

My medical plan included $500.00 in coverage for “social work.” For whatever reason, I was hesitant to engage this budget. It wasn’t until I had moved through several failures in sleep remedy that I finally picked up the phone on my lunch break one day in December and made an appointment with a therapist.

We only had four sessions together. Within that time, my therapist got me to ask myself the scariest question of them all: What if I never slept?

I confronted it on paper, writing out a long and melodramatic worst-case scenario which ended in me being committed to a mental institution, gone insane from not sleeping. I would read it out to myself night after night, looking at it and letting the shudders of fear turn into mild tension in my bones. Then one day, I looked at it and didn’t care. So what if that happened? I would make it through, if I had to. I would live.

Journaling was part of my therapy structure. One night, I wrote out the particulars of the life I wanted to have. It had a family — a husband and children, a home in a rural place and some goats in the yard. It had writing in the morning and good meals and wine. It had bookshelves and love. It was a great comfort to articulate it and feel that it could be mine.

My therapist and I only met for four sessions, but she taught me how to abandon the desire to sleep. She made me question why it mattered so much, and reminded me how young mothers and leaders of great countries function remarkably on limited amounts of sleep.

She isn’t my therapist anymore; I don’t even remember her name. But she set my mind on the path for relearning sleep.  Making the first appointment was the best decision I ever made.

Copy of The Help

Oddly and so beautifully, it was a book my mother recommended (we tend to diverge in literary taste), that ultimately rocked me back to sleep. With its sweetness, The Help became the book I didn’t want to put down to go to bed. I would read through the night, nodding off naturally around two or three in the morning, book on my chest. Bless that book. Bless all books for the worlds they allow us to sink into when we need them.

Almost all of my attempted solutions cost me money, but at the end of the day what saved me was the most simple, and free, change in thinking. And I want to share it with you:

The minute I stopped chasing sleep, it came for me. In the most horrific game of playing hard to get, I set sleep up for the win. I learned to welcome the night for the time it allowed me to burn through chapters of books. Sleeplessness became the greatest advantage to growing my spirit. I made friends with the enemy.  And it worked. By February of 2013, I was sleeping through most of the night, naturally and deeply.

I don’t regret the money I spent trying to find my sleep. But if you, reader, are struggling with insomnia, I would definitely recommend skipping the steps I’ve laid out and going straight to cognitive therapy. Save yourself some bucks. And remember: you don’t need to chase the night.

Sarah Bauer is a content developer and web project manager living in Kelowna, British Columbia. If she could ever own a dachshund, she would name it Schwartz, in honor of a kind fisherman she met one summer while working at a salmon fishing lodge in Haida Gwaii.