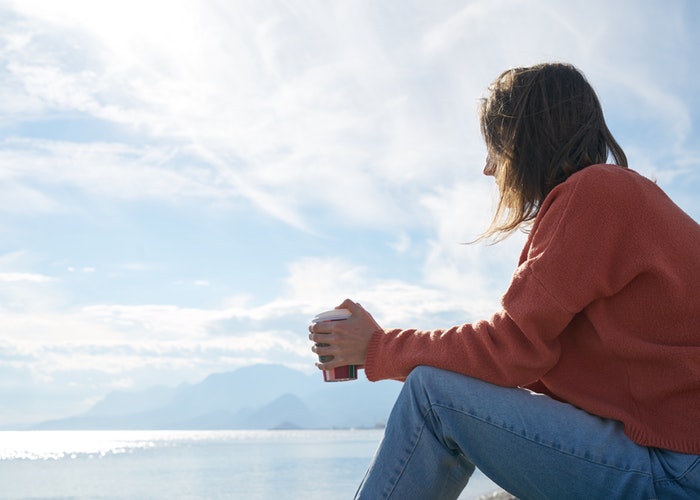 I had my first panic attack when I was seven. It remains my clearest memory from childhood.

It was triggered by a simple enough thing – I realized moments before I left for school that I’d forgotten to finish a sheet of homework. I’d never not done my homework before, and suddenly I was about to be one of those “bad” kids who blew off assignments. Instead of telling my parents, the inside of my head became my own personal hell, with all the worst-case scenarios playing out over the morning until I ended up hyperventilating in the principal’s office.

If you’re lucky enough to have never experienced a panic attack, they’re intense bouts of mental anxiety or fear that boil over into physical reactions. Occasionally, my panic attacks also cause profuse sweating, which then leads to significant body temperature drops — I’ve even fallen into the hypothermia range. Most of my attacks have been centered around fear – the fear that one mistake, no matter how small, would derail me entirely.

I see a therapist semi-regularly, and my panic attacks are less frequent than they used to be. At their worst, they’ve driven away my loved ones, frightened my roommates and left me too sick to go to class. These days, I try to soldier on through strange coping habits, often trying to spend my way to normalcy while I ride them out.

But these attacks can also be expensive. To illustrate my point, here’s what my last three panic attacks looked like, emotionally and financially.

The cost of trying to remain calm

It’s a Friday in the summer. My colleagues are starting to leave early. I’m sad that they’re all going out with friends and I have no plans. I’ve also just messed something up at work and am unable to fix it. My boss makes it clear I’m not going to be disciplined, but I’m still embarrassed. When I finally leave her office it’s after 5 PM, But my legs are too shaky to get on my bike, so I sit.

I do what I do whenever I feel insecure about my job performance: I look at job sites, then hate myself for searching for them on the company computer. I hate myself for being a sell-out trade journalist. I hate myself for being unwilling to leave Toronto. I suddenly hate that I’m married, which is the main reason I can’t leave, and I worry that this means I’m starting to resent my husband. I become a knotted pile of worries.

I get a reminder that I’ve missed the 5:45 PM yoga class I’d paid $13 to book. I’ve already worked out today, but missing yoga still makes me feel like a lazy failure. Figuring I might as well just say “fuck it,” I sulk out and order a wrap from a nearby restaurant. After tip, it comes to $17. That’s $30 so far on being a lazy ass, I tell myself, hot tears in my eyes. The wrap is delicious, but I’m hyper-focused on the runny Buffalo sauce dripping down my forearm. Everyone can see me.

I take a walk and everyone’s footsteps are too loud. I’m convinced at least one person on a nearby patio is laughing at me. I go to a cannabis store, even though weed almost never calms me down. I can’t roll a joint to save my life, so I pay $34.07 for a pack of 10 pre-rolled joints – almost $3 more per gram than I’d have paid if I’d just bought bud. Then I realize I don’t own a lighter. I simper sadly into a Starbucks to buy tea and a pack of peanut butter cups, for just under $5. I stare at the paper bag of joints and wonder why I bought them.

Now that I’m too tired to be angry, I’m just sad. And lonely. I’ve lost half my Friday night to a ninety-minute string of impulses, but I’ve dug my claws in too deep to salvage it. I buy another tea. Another $1.50.

Finally, I call my husband and ask if he can pick me up. He spends $12 on a short-term rental car, and it will take him at least 45 minutes to get there, but he does it, because he wants me to be OK. He helps me load my bike into the car and I am too tired to say anything on the way home.

Pleasing other people can be expensive

It’s Thanksgiving. I wake up with a feeling of dread because I have to see my family. They love me, but every time we’re all in the same room, it’s so loud, and someone inevitably makes fun of me for something.

My Mom texts me pretty early and asks when we’re getting there, which already sends me into a panic because she means “Why aren’t you here yet?” I tell her I don’t know and then… nothing. No text. She’s not even typing. My Mom is constantly looking at her phone, so she knows I responded. My heart sinks and I start crying to my husband already. “She’s mad at me!” I hate myself for being fragile. Finally, she tells me my brother is already there. I start charging around the apartment. “We have to leave now!”

We were planning on running a few errands that morning, including laundry. But I will only allow us time to shower, pack, and leave.

But as I assemble my clothes, I realize my only clean pants are high-rise vintage dad jeans, and my Mom always hates when I dress too “hipster” for family events, and she’s vocal about it. But I throw them on, along with a warm sweater. With my short hair, ugly sweater, and stupid pants, I feel like I look like Eric from That 70’s Show.

As we approach her city’s only mall, I ask my husband to pull in so I can just buy a better outfit. You idiot, I scold myself as I march into the mall. Just waste your money and keep adding to your laundry pile because you didn’t set aside clothes to have a nice dinner with your family. I wade through the crowds of teenagers and find a store that strikes the balance between affordable and tacky, but between the nice black jeans and the respectable blouse, I still blow $75.

My hair still looks terrible, but at least I can get that serotonin hit from my Mom saying she likes my blouse. I check my phone. It’s well past lunch, so on the way out of the mall, I grab Taco Bell. My panic has been replaced with murky self-hatred.

I’ve put off shopping for a dress for an award show at work. I am now one day away from the show and have only just accepted that none of my dresses are seasonally appropriate or formal enough. I hate shopping, and I hate malls, and I wanted to avoid this.

Between juggling my workload, which feels like it’s doubled in the past year, and my side gig teaching dance, I’m already rattled. I want so badly to skip the show, but I’m presenting on stage, and it’s crucial to get face-time with my contacts. I’ve had a few opportunities to go to the mall, but I’ve put it off because of how mentally exhausted I am. Now, it’s the eleventh hour.

After work, I march miserably to the mall. My phone buzzes at least 15 times on the way – emails from work, emails from the dance studio, texts from my husband. When I get there, I already feel like I’m drowning. My coat and backpack feel too bulky and I feel like I’m covered in road salt. At the fourth store I visit, I finally try on a dress. The image in the mirror devastates me. I’ve forgotten to wear a real bra, and my neon sports bra is not only sticking out, but it’s also giving me an unflattering uni-boob. I desperately need a haircut, and I look pale under the store lights. I can’t even get a handle on how the dress looks on me because all I see before me is a growing checklist of the things I should have done differently.

Onto the next store. I’m so distracted I forget my size. I start grabbing at dresses – size 2, size 8, size 12, brown, green, blue, sparkly, sheer. The first dress falls off my shoulders. The next one has arm holes so big, both my boobs are visible through them. The third one is slightly too big, not a great color and an unflattering cut on my body. But my brain is filled with dissonant chaos, and I fear I will never get home if I don’t just make a decision soon. I yank off the dress and take it to the counter without even looking a second time at the price tag.

It’s $113. I’d tried on two that were half that price. But I don’t let myself look back. I try not to draw attention to myself as I power-walk out of the mall. I wear the dress for the award show and then never look at it again.

I have always been open about my mental health – I’ve written about it extensively on TFD. But I don’t often go into detail about how I deal with them. People have always assumed I have a private breakdown and move on – and I’ve let them assume that in part because I’ve worried that telling stories like this will be brushed off as superficial attempts to justify “retail therapy.”

But as my actual therapist pointed out, it’s not the purchases that are the problem. The bigger problem is the constant self-berating on the way to these purchases, and it comes out in these short scenarios. It’s something I am still working on: Am I trying to spend my way to a different “me” that I like?

The main way I deal with this is to let someone, usually my husband, know I’m feeling overwhelmed. That support helps me ride out the storm, instead of wandering around downtown trying to tap my card until I feel better. I’m still not perfect, but at least I’m improving.