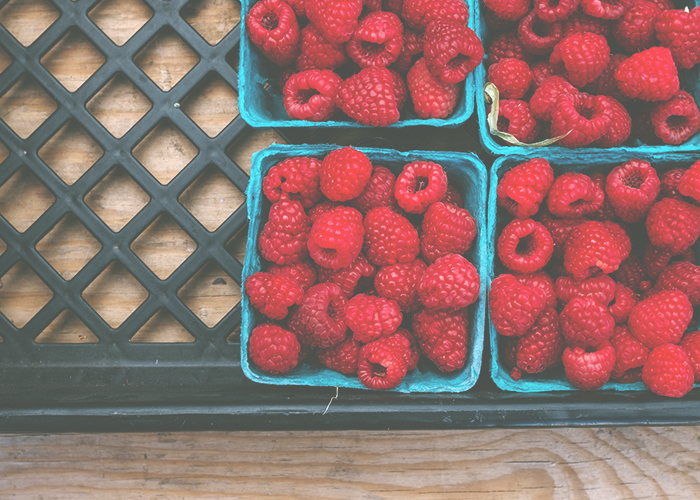 In my first post for The Financial Diet, I explained that I was attempting to spend only $100 on groceries for the month of June. I challenged myself to plan my meals for Week One by not relying so much on individual, frozen meals (my normal grocery habit). I’m also gluten free; last year’s Celiac diagnosis pulled the plug on my love for gluten-y foods. Goodbye, bread and pastries. Sigh.

For all my Celiac (or gluten-free experimenting) friends out there, I want to share my recap of how the remaining weeks in June went. Spoiler alert: it was, give or take $5, a success!

After starting off strong in my first week, I was pretty lax with my meal planning during my second week. I was leaving town for 10 days at the week’s end; before I left, I wanted to use up the groceries that I had ignored for so long. I gave myself $20 in grocery money for the week. With that money, I purchased: fresh mozzarella ($2.49), 1 pound of ground turkey ($6.49), an onion ($0.53) and gluten-free soy sauce

($4.89). Note: most soy sauces are malt-based and therefore contain gluten, but gluten-free soy sauce does exist! I found the Organic Tamari brand at Target. These purchases brought my weekly grocery total to about $15.

I had a lot of eggs and rice already, so I tried my hand at fried rice

with eggs. I didn’t quite follow the recipe correctly (oops, I’m still a newbie at cooking), so it turned out a little funky. Next time, I hope to have better results. The recipe (listed below) only needed rice, eggs, onion, and soy sauce (it called for green beans, but I left those out because they’re not my taste). Since I had the eggs and rice already, the recipe only cost me $5.42 to make; best of all, the soy sauce will last me much longer than that first attempt.

For my breakfasts, I wanted to make something more filling than scrambled eggs, so I threw in some chicken sausage I already had (I like Applegate Naturals chicken sausage, $2.99 a pack) as well as chopped onion. I use only half a sausage for each scramble I make, and the sausages come four to a package; that’s about eight scrambles for $0.56 each (this includes the cost of the onions, sausage, and eggs). BAM. Easy breakfast on the cheap. (And SO much better than the Glutino’s Gluten Free Breakfast Bars — $1 a pop — that I had been relying on for breakfast previously).

Since I still had meatballs, tomatoes, and crust purchased from the prior week, I relied once again on the easy gluten free pizza (not creative, I know, but hey — it cost me zero dollars). The recipe for the pizza can be found in my prior post.

The ground turkey ended up going unused (whoops), so I put it in the freezer for when I returned from my trip to London. #groceryinvestments #freezersarelifesavers

I came back from London on a Wednesday night with absolutely no food for lunch at work the following day, so circumstances (aka, laziness in prepping for my return) forced my hand: I purchased a frozen Amy’s

Gluten-Free Cheddar Burrito ($3.00) on my way to work the next morning for lunch. Not ideal, but the burrito is still cheaper than the frozen Udi’s Lasagna individual meals that I used to get for $5.00.

Once I had time to sit down and plan my meals for the last week and a half of June, I set a budget of $50 for groceries. 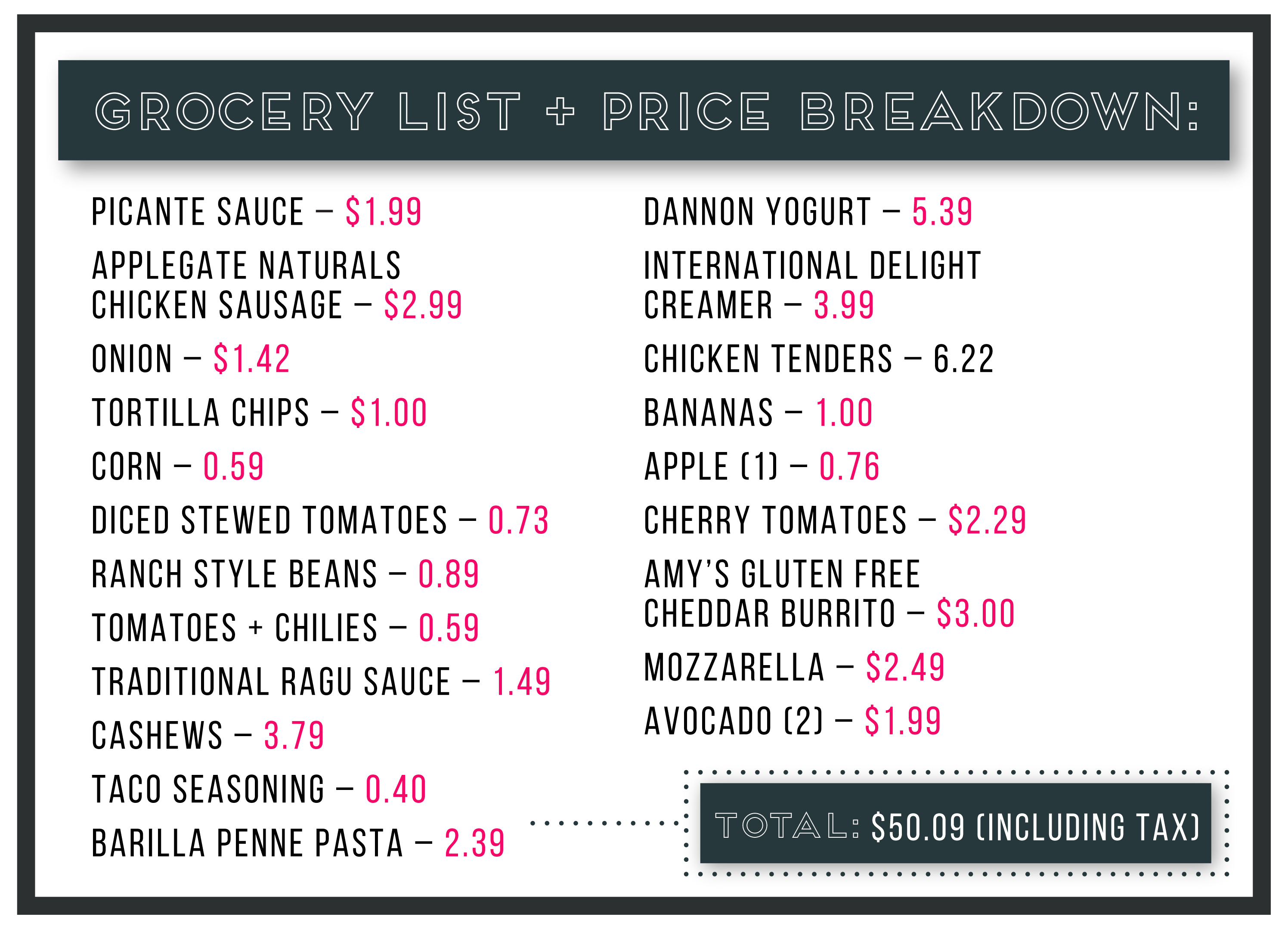 Because I had some of the ingredients (as in, the crust) already on-hand, I made myself another gluten-free pizza and avocado salad during the first weekend after my return.

I also used the ground turkey I had frozen in Week Two to make two Caprese-style turkey burgers (recipe below) after a friend inspired me to give it a go. All told, these burgers cost about $4.50 per patty. To use up the other half of the ground turkey, I made pasta and meat sauce. I used Ragu’s traditional spaghetti sauce as a base, threw in some of the chopped-up onion, and poured it over Barilla’s Gluten-Free Penne Pasta. This recipe made two servings, around $4.30 each.

(also $0 leftovers from Week One), and tortilla chips (which made a second appearance in my taco soup), and picante sauce

In the end, I spent $105.53 on groceries in the month of June: only $5.53 over my goal budget (which I consider a budgetary victory)! From this exercise in self-control with grocery spending, I realized the importance of taking stock of what ingredients I already have on-hand and then taking the time to properly plan recipes around those ingredients for the week ahead. Though I was traveling for 10 days this month, $105 is still around $50 less than Pre-Budget Me would’ve spent on groceries. Next month, my goal is to continue keeping a modest grocery budget while trying new gluten-free recipes (rather than relying on the same four or five recipes that I usually use). 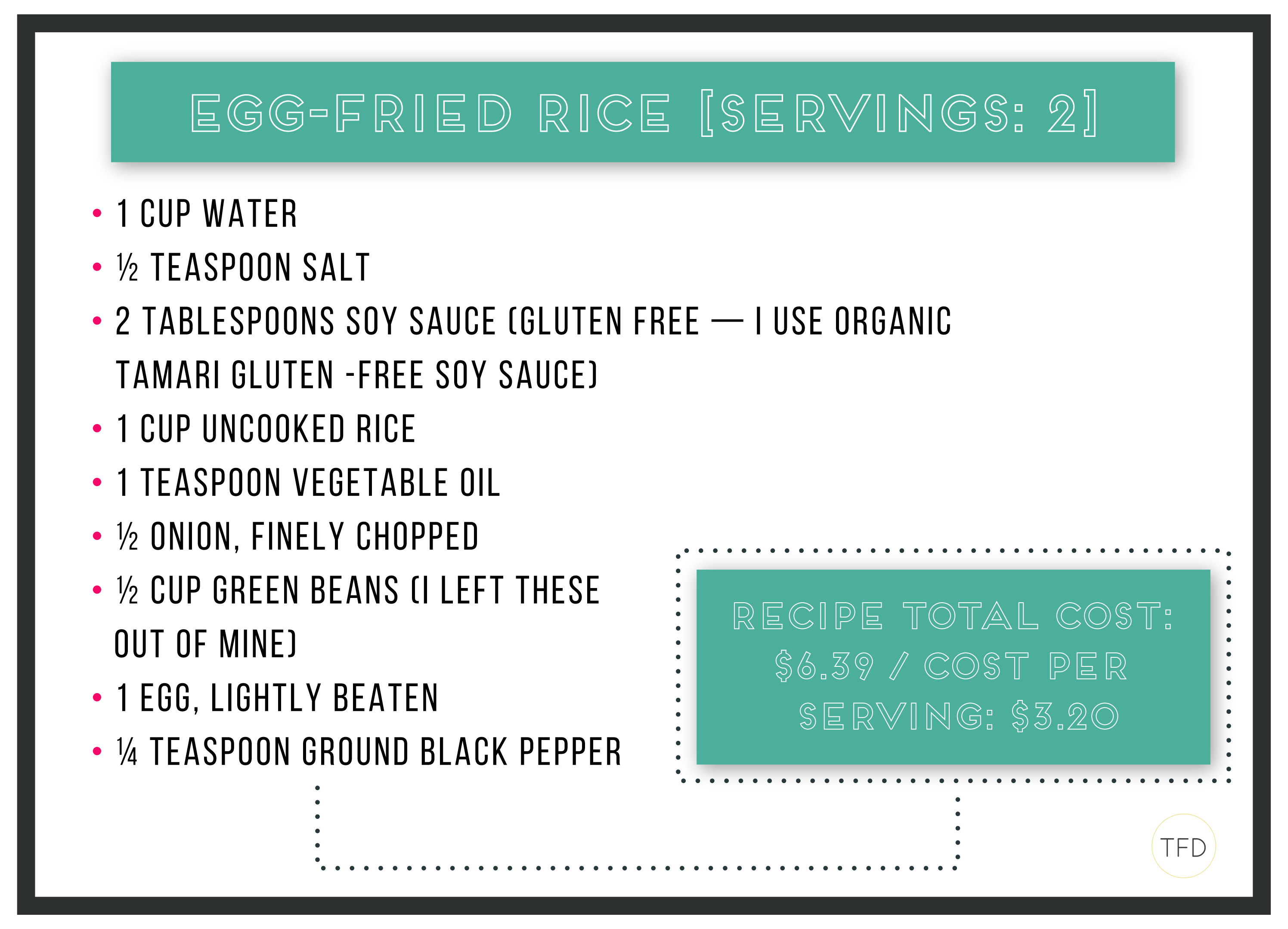 In a saucepan bring water, salt and soy sauce to a boil. Add rice and stir. Remove from heat, cover, and let stand five minutes. Heat oil in a medium skillet or wok over medium heat. Sauté onions and green beans for 2 – 3 minutes. Pour in egg and fry for 2 minutes, scrambling egg while it cooks. Stir in the cooked rice, mix well and sprinkle with pepper.

Note: I already had white rice in my pantry, so I didn’t factor in that cost to the budget total. For the egg, I broke down the cost of one egg out of a carton of 12 eggs for $0.99, so that’s about $0.08 an egg. Also, now that I have the gluten free soy sauce on hand, the cost per serving for future batches of this recipe will be significantly less, as the soy sauce ($4.89) was the majority of the cost. 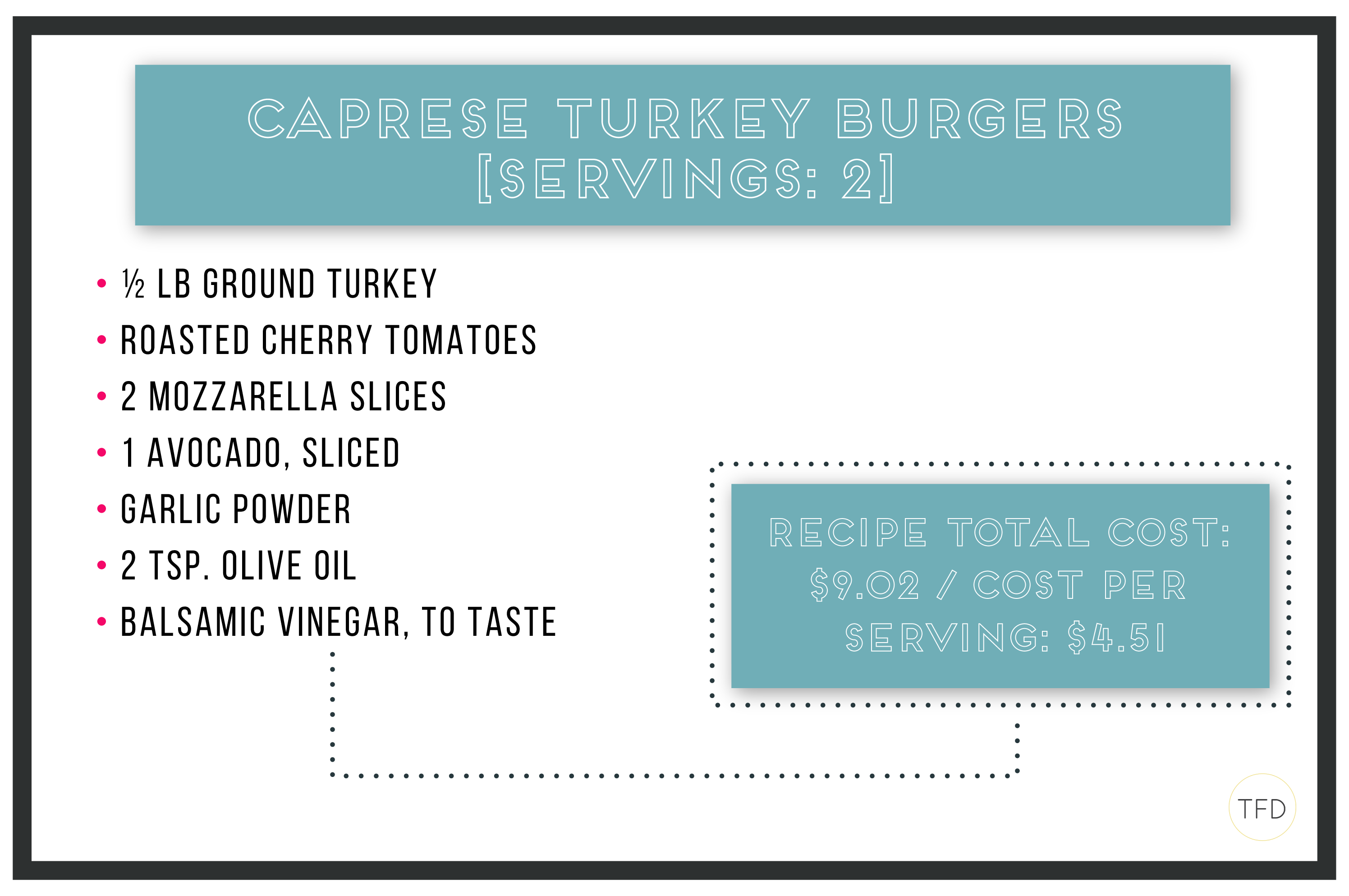 Cut ground turkey in half, rounding each half into patties. Sprinkle garlic powder to taste on both sides of patties. Put about a teaspoon of olive oil on skillet, then place patties on skillet, cooking on medium-high, flipping patties occasionally until cooked all the way through. Meanwhile, put sliced cherry tomatoes in a saucepan with 1 teaspoon olive oil. Cover and heat on medium-low until tomato skins are wrinkled, then remove from stove. Remove patties from heat, place mozzarella slices on each patty, cover pan, then replace on low heat until mozzarella is melted. On a plate, top patties with roasted tomatoes and sliced avocado, then sprinkle with balsamic vinegar to taste. 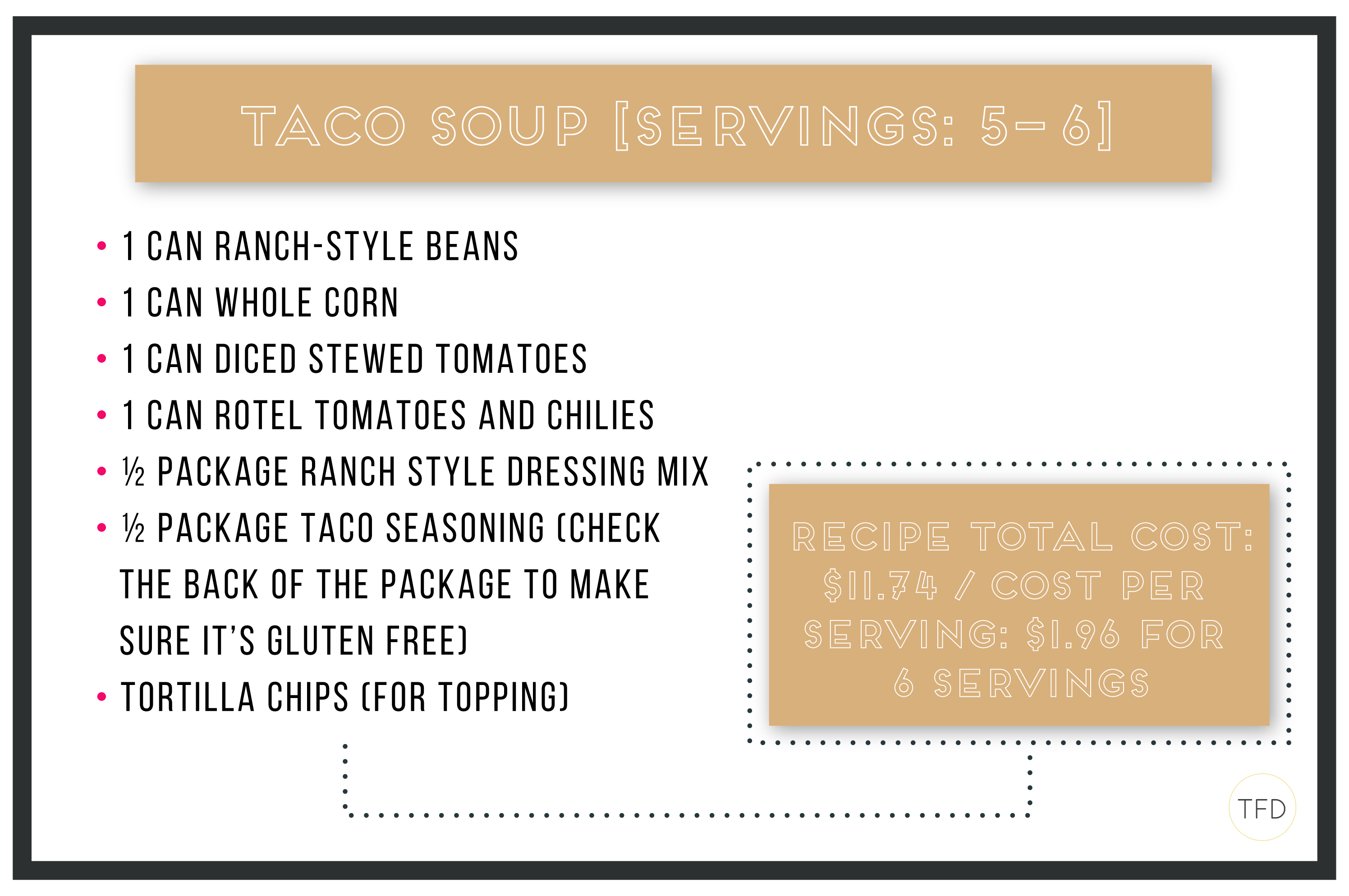 Cook all ingredients together on low in crockpot for 6-8 hours. Serve with grated cheese and tortilla chips. Note: I factored in the price for an entire package for both the dressing mix and taco seasoning (you’d need to buy these to make the first batch), but you will have the leftover halves to make the recipe again in the future, saving you a wee bit of money for your next grocery run. If you remove the chicken altogether, that would save you even more. 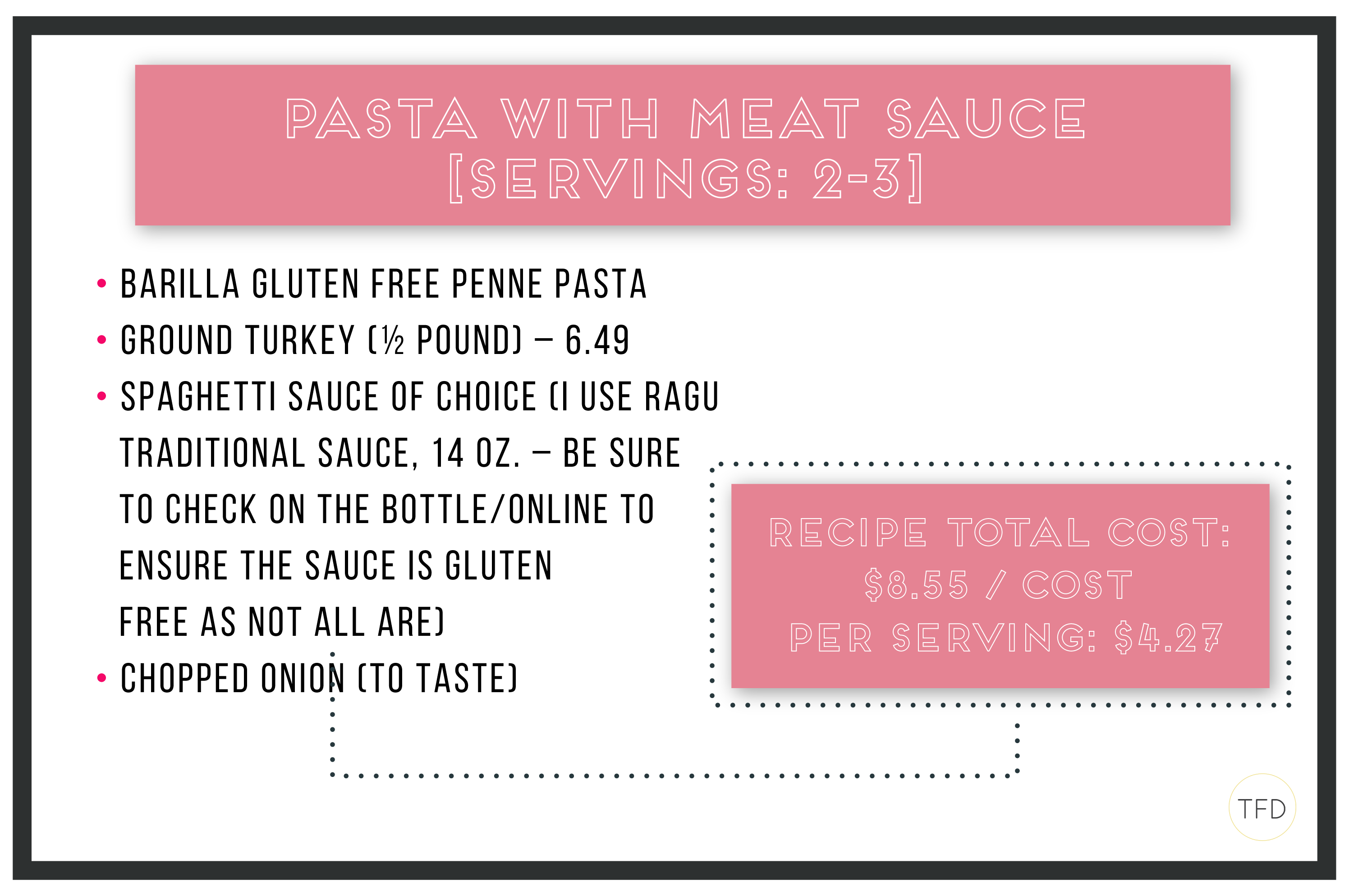 Brown the ground turkey on medium-high heat in a skillet. Begin boiling pasta, following directions on package. Once turkey is browned, drain fat. Add in chopped onions to taste, continue to cook over medium-high heat to allow onions to sauté, then remove from heat, pour in spaghetti sauce to taste, heat on low for two to three minutes to warm sauce.
[Recipe Total Cost: $8.55 / Cost Per Serving: $4.27]