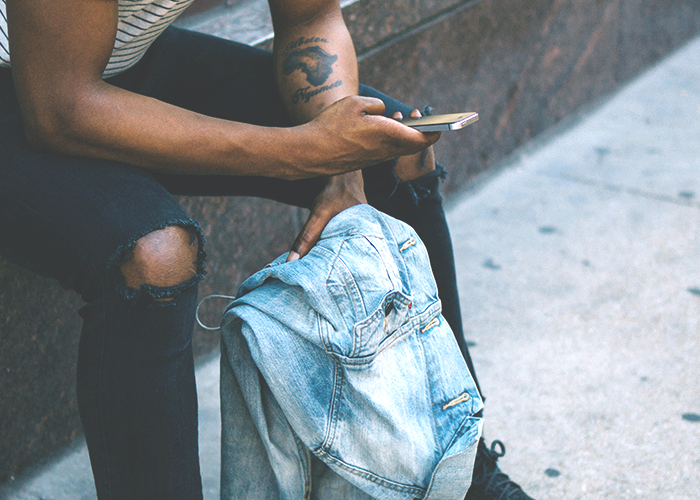 I’m pretty well known for the financial stupidity that has accompanied my love life in recent years. You want a $75 box-set of action figures? Let your sugar mama take care of that! A trip to a foreign country? Sure, take all my cash and go — I love to make you happy! Aw, you dumped me? Maybe I should spend 75% of this week’s paycheck on clothes that make me look like the type of girl I think you’d regret breaking up with so you can come back to me. Works every time, like a friggin’ charm!

It isn’t just me — in fact, many super-cool ladies have been pretty transparent on TFD about the spending, (insecurity-based, breakup-induced, and otherwise) that surrounds their romantic lives. It is a topic that we’ve discussed many times, as recently as last week, when Holly wrote this hilariously honest post about the money she’s spent on impressing dudes (that honestly had me laugh-crying by the end because I related so hard).

But I do have to wonder where the freaking guys are in this conversation. We ladies are pretty cool, and it seems we love making the people we’re into feel special so much that we’re willing to toss cash we’re not even sure we have at our ~budding relationship~ to try and make it better, stronger, and more special. But boys, I know you’re out there, too! I know you’re not all big shots with six-figure salaries who actually mean it when you slap down their credit card and nonchalantly say “I got this one.” We’ve all gotten lost in the moment and spent a little beyond our means to impress someone – men included. I asked a bunch of men in my life what kind of money they’ve spent to ~impress~, and this is what they all had to say. (Sorry to open up old wounds, my sweet friends.)

1. “I insisted on paying for everything even when she genuinely and wholeheartedly offered to pay, or at least split the bill. She was so kind and offered always, and I couldn’t afford things always, but I wanted to feel like a big shot so I said no every time. Thinking back on it now, it probably made me look like a dick to put her down and turn down her kind gesture every single time. I think she was just trying to show she cared and I just wanted to show off.” – Jackson

2. “I spent nearly $300 on concert tickets to go see a band that the girl I liked really liked. And no, I didn’t invite her, or go see them with her. I just went so I could post online that I went so she would see and we could talk about how cool the band was. It was a really slow play.” – Tyler

3. “Well, during a month-long stint on Tinder I ended up spending hundreds of dollars on meals/event tickets/alcohol/etc. for women who I’m pretty certain were just trying to get free meals. Which is fine, I actually totally get it and they’re not doing anything wrong because it isn’t like they owe me anything for buying them dinner, but it is definitely a bummer because there is sort of an expectation for a man to pay, and it is like damn, if I want to get to know someone, I have to buy them dinner, and they might not be down to get to know me, they might really just be hungry. Women deal with a lot so as a dude I’m gonna try to just take this one and not complain. But yeah, hundreds on Tinder dates! Maybe close to a thousand.” – Christopher

4. “I made the mistake of living with someone too soon in a relationship, and it ended up being her not wanting to work or help out around the house. It put me in a rather uncomfortable position.” – Steve

5. “Hmm, well when I was in high school I thought I’d be slick and get this girl a really nice gift to impress her. I’d heard her complaining about being barred access to the schools’ practice rooms with the pianos. I put some savings together and put about $170 into a nice used Yamaha keyboard. Of course, we’d been enjoying each other’s company for only about two weeks at the time, and I didn’t know she had a big nice actual piano at home.” – Josh

6. “A girl I just began dating mentioned one day that she thinks men look silly in pea coats because they look like they’re trying to be too fancy. She was kind of a bitch looking back on it for saying that. But I actually had a pea coat that was really expensive, and I threw it away after she said that. We broke up (obviously) and I really regret throwing it away so she wouldn’t think I was weird; I really wish I still had the damn coat.” – Zack

7. “Oh god, I dated a girl who was really into fashion so I had a female friend of mine take me to a nice department store and get me all dressed up in these trendy clothes. I spent so much. That was my fault for being an insecure asshole because the girl was so cool and fashion was like, her thing and she didn’t really expect me to love it. We were together for a bit after that and she always joked about how I didn’t need to spend so much money to get her to like me.” – Evan

8. “I brought a girl to a really expensive tapas restaurant because I thought it would impress her, and I think it did, but we ordered so much stuff and she literally ate nothing. It was such a waste; I was like shit we could have gone to Chipotle.” – Nate

9. “When I was dating my high school girlfriend of four years, I spent money on her like water. Partially because I was privileged and got a large allowance from my father, and also part because she didn’t get much money, if any, from her family. If I wasn’t willing to spend money on our dates, we simply couldn’t go on dates. I would occasionally bring this up in a, “Would you be willing to pay your half sometimes?” way, but she would basically, and I believe honestly, tell me that she couldn’t.” – Kevin

10. “Well I don’t know if this counts, but in one day I spent a lot on my ex. She was very cheap and claimed she didn’t get paid enough so one day we went to the fair. She drove, but had me give her gas money, and I had to pay for parking, fair tickets, ride tickets, and food all for the both of us. At the end of just one day at the fair I was down $200. She was also complaining that I’d only bought her flowers once in the two weeks we had been dating at the time, so I ended up buying her roses to make her happy, but I didn’t really have the money to.” – Michael