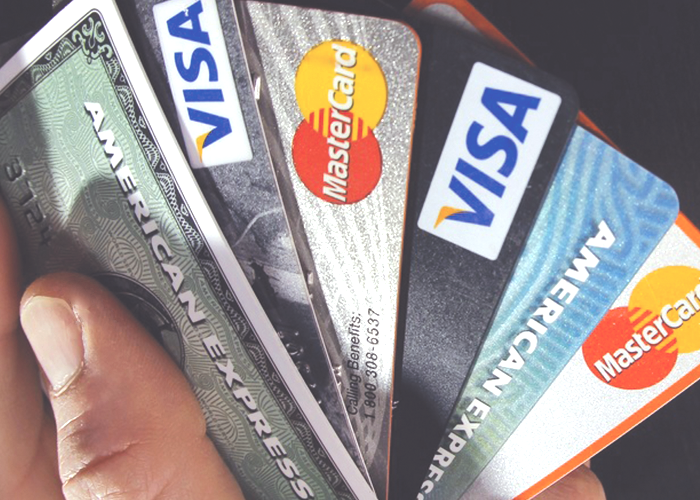 Over the past few weeks, I’ve been reading through some truly incredible stories of how individuals, specifically women, have paid off huge amounts of debt. As of today, I have just shy of $21,000 in student loan debt. I graduated with nearly $30,000, so I am making progress (albeit slowly). I’ve been out of college since 2012, and while I like to think I’m well on my way to paying off my remaining debt, I know I’ve got a long way to go.

Nearly every one of the stories I’ve come across has mentioned the intense feeling of empowerment that results from chipping away at debt. In some ways, the act of paying off debt for a long period of time forces one to learn patience, diligence, and commitment. When I feel down about my own situation, I try and think of the silver lining and focus on how it can be a study in character building. Heh. But seriously, it’s not easy to have debt hanging over your head — it can feel suffocating and distracting. I wanted to round up powerful stories of people who took control of their own financial lives, and paid down their consumer or student debt.

Take a look at these inspiring stories below. The examples that these 11 people have shared have provided me with specific examples, ideas, and solutions for paying off my own debt more quickly. I hope they will do the same for you! 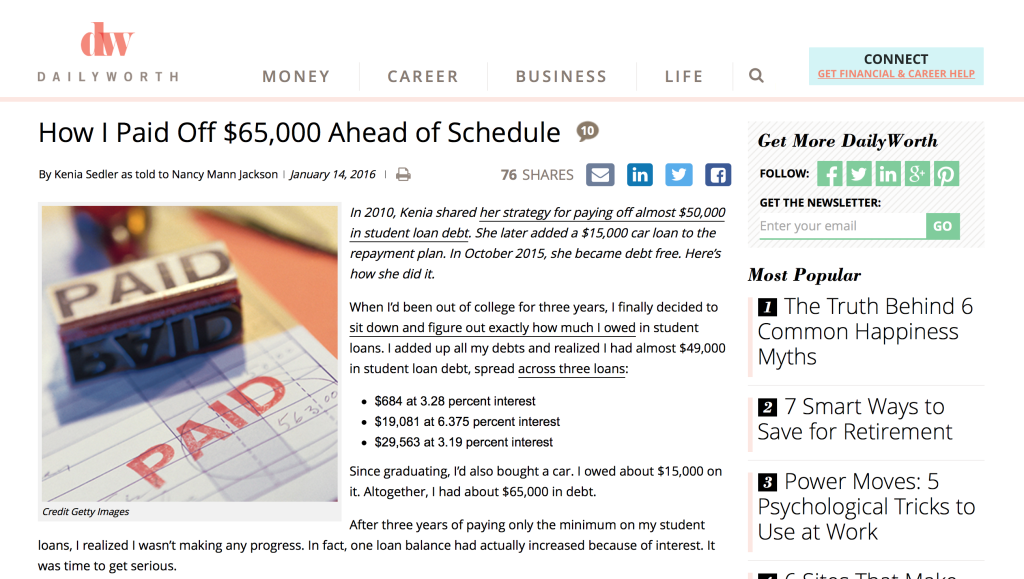 How one millennial woman used the Debt-Snowball method to pay down a whopping $65,000 in student loans and car payments. She shares specific measures and strategies that allowed her to accomplish such a feat. Kenia gets real and writes, “One of the hardest things about sticking to my plan was denying myself things I’d like to do. As an engineer, I make a good salary. Many of my peers spend a lot of money, buying homes and funding fancy weekend getaways, but I’ve had to say no to all that.” 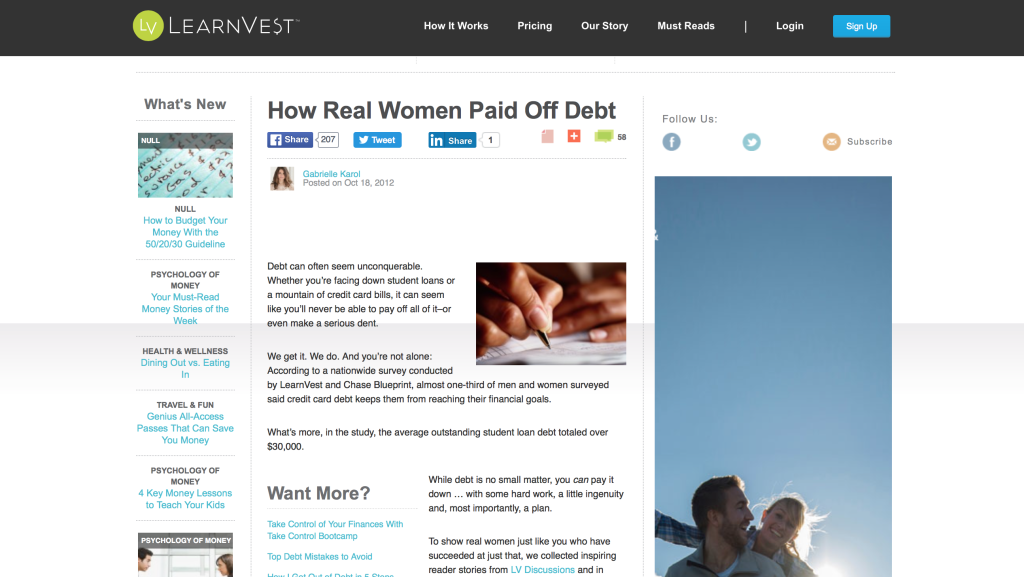 These eight women explain how they paid down significant chunks of debt by making real and meaningful changes in their lives (and spending habits). For example, Alice writes, “I paid off $28,000 in student loans and saved $11,000 in only three years. I’m single, so I gave away 75% of my things and moved into a house where I rented a small room. I was able to cut my expenses by $900 a month!” 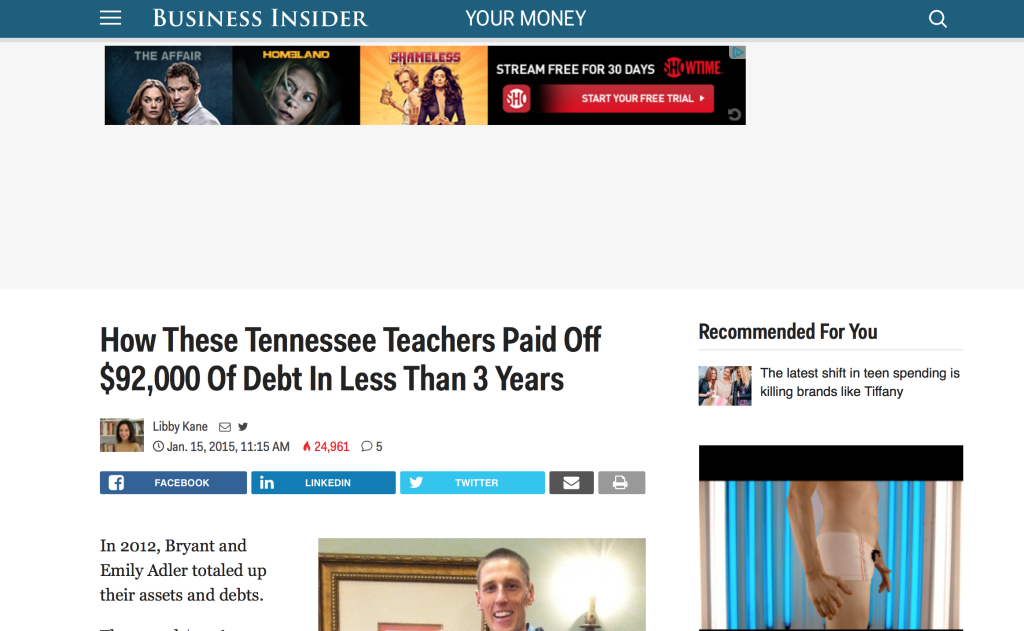 $92,000 seems like an amount of debt that would crush most people, but not this couple. One woman and her husband tackled their debts together and paid them off in under three years. The article talks about a low point in their journey, and the author writes, “She (Emily) found the strict shopping limit one of the hardest parts of the process — that and the disconnect from other people who didn’t understand the urgency of paying this debt. ‘Having to say no to people who didn’t always understand what we were doing was really hard,’ Emily says. ‘Some people didn’t and don’t agree with what we did.’ ” Give the article a read! 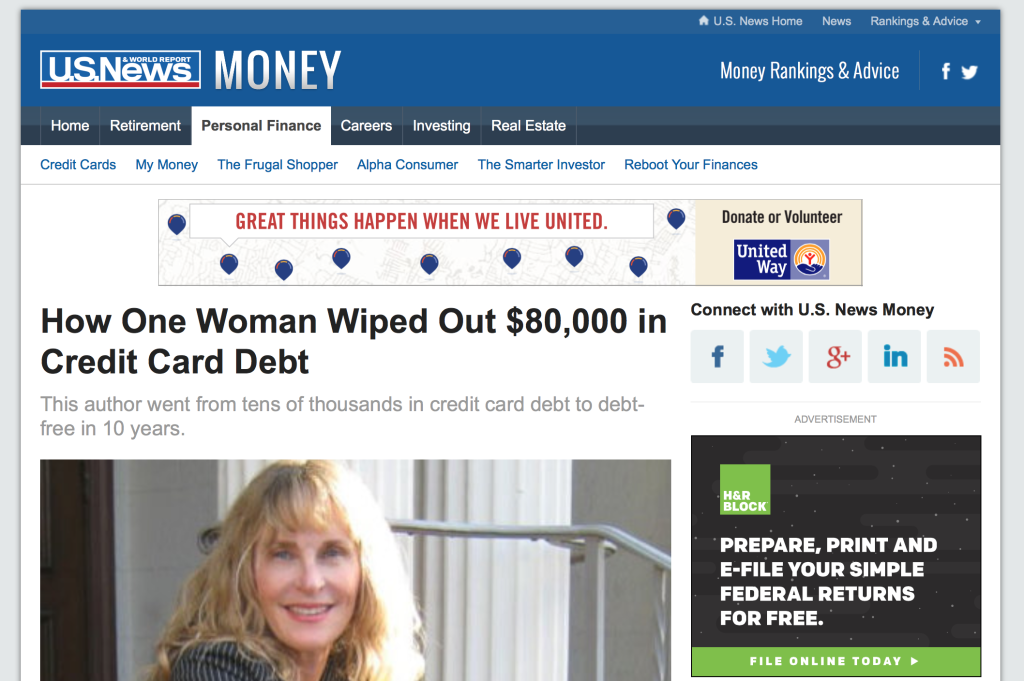 It took author JoAnneh Nagler nearly 10 years to pay off her credit card debt, but she shows us how a simple and powerful plan can help eliminate debt quickly. JoAnneh provides us with an example of her thought process, and writes, “I needed to create an easy, simple, five-minute-a-day tool that wouldn’t consume my life or be so arduous that I’d check out after a month. I wanted it to take me five minutes a day and I needed daily tools that would keep me accountable. I wanted to make sure I could pay bills on time, fund daily needs with ease, and plan for things that are meaningful to me. And I wanted to my life to change within 30 days.” Definitely worth a read! 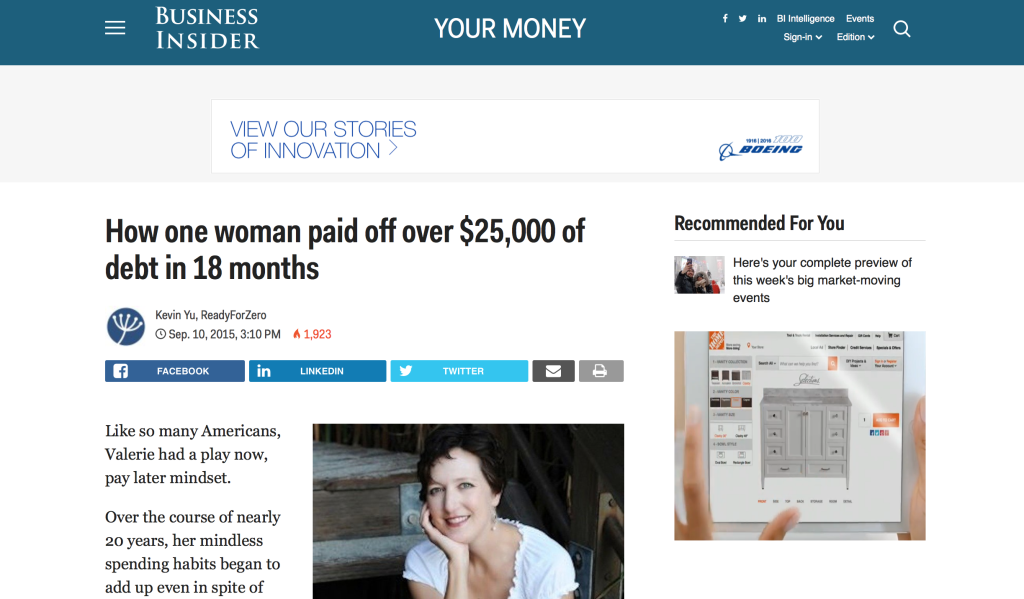 18 months seems like an exceedingly short time to pay off nearly $25,000 worth of debt. This is a fascinating story of how one woman utilized a multi-pronged approach to eliminate debt and tackle it head on. Valerie writes honestly about the shame she felt, and says, “The feeling of being embarrassed and ashamed is something millions of Americans feel every day. When you think about someone having a load of debt, it’s easy to judge and think how financially irresponsible they are. At some point in time, we’ve all been there.” 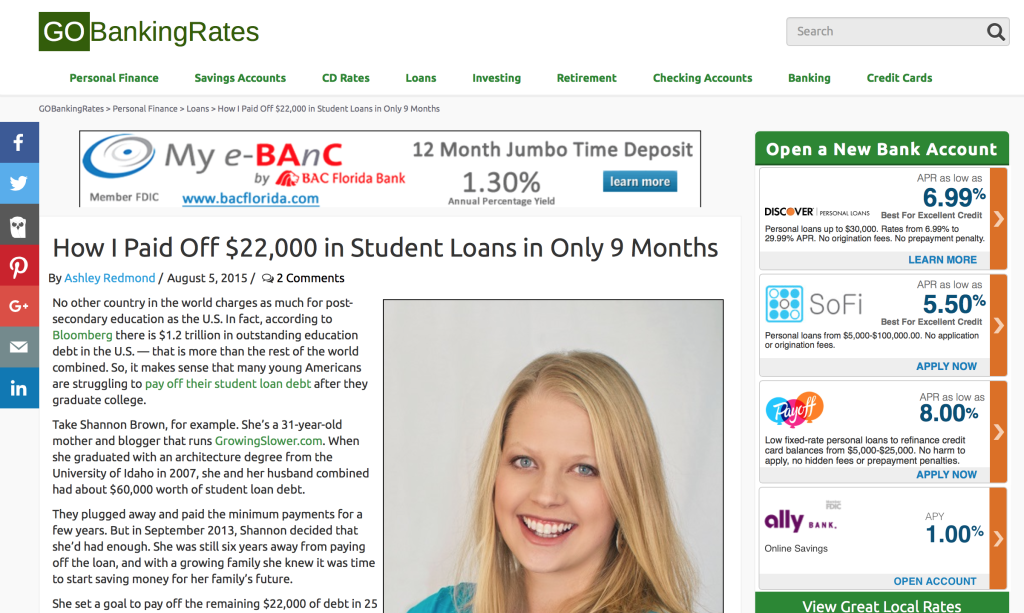 Shannon Brown advocates for her method of paying down debt, saying, “If you want to make progress on your debt you may have to find creative ways to increase your income.” She knocked hers out in a mere nine months. Taking little steps are important, and Shannon writes about the value in the approach saying, “I decided to allocate $39 a month to our debt because after doing some calculations online, I realized that even that small amount was going to cut several months off of our debt payment timeline. I set up an automatic banking payment for that amount every month, and that way it’s done for you.” 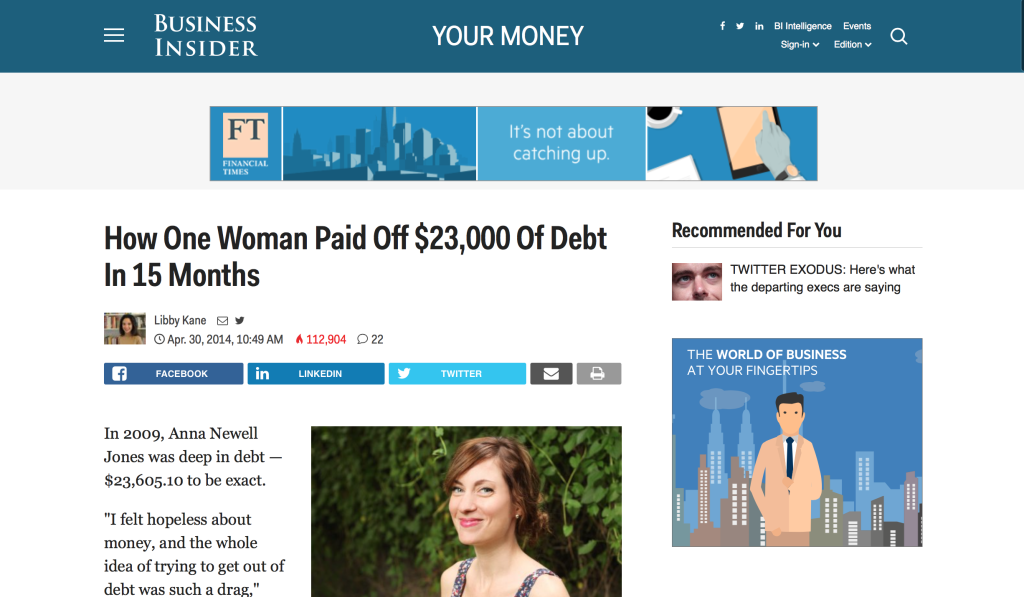 Anna describes the daily battle she underwent during her attempt to stop spending, and wrote, “I am a natural spender and constantly have to fight that instinct in myself. I was surprised by how free I felt almost instantly…but what didn’t surprise me was that it was hard to break my habits.” Anna takes a rather extreme method to get herself out of debt, but it worked wonders for her. She provides the specifics of her plan, and how the rest of her life was affected by her extreme “diet.” 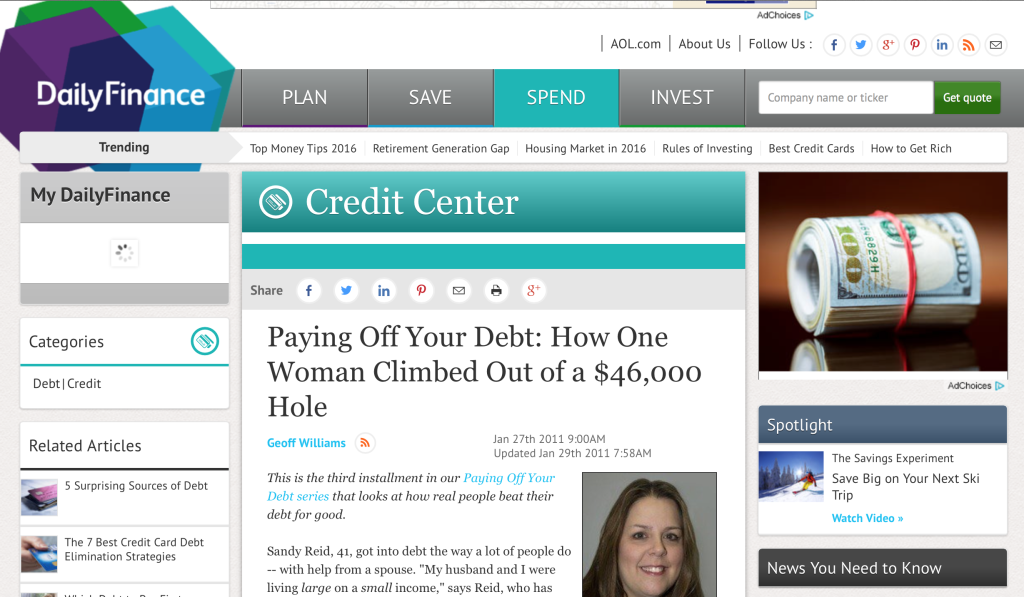 A fascinating story of how one woman got herself into extreme credit card debt and climbed her way out to start off fresh (and debt free) once and for all. Sandy describes how easily she fell into debt, and writes, “We probably ate out for dinner five times a week,” Reid says. “He was an avid golfer and needed all the newest toys for that. When we got married, we spent two weeks in Jamaica, which cost over $10,000. We felt that we deserved these things and didn’t pay attention to the cost.” As I read the article, I realized that I, too, struggle with feeling like I simply deserve things, and I spend money needlessly.

9. How One Woman Paid Off Serious Credit Card Debt in 18 Months 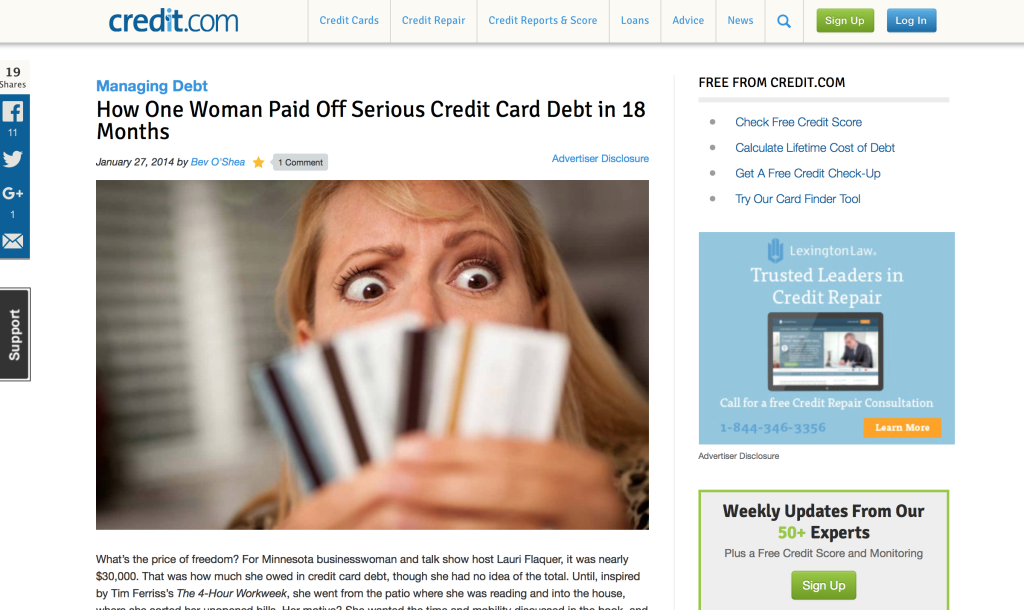 One woman explains exactly how she paid down her debt and describes the intense sense of empowerment that came with taking control of her financial life. She illustrates the way in which she was able to pay off debt, and writes, “Using what’s often called the ‘snowball method,’ she began paying off her debts, from smallest to largest, often paying several times the minimum payment — and continuing to put what she had been putting toward the smaller balances toward the remaining bills.” The Snowball Method is a very effective debt-reduction strategy, and you can read all about it here. 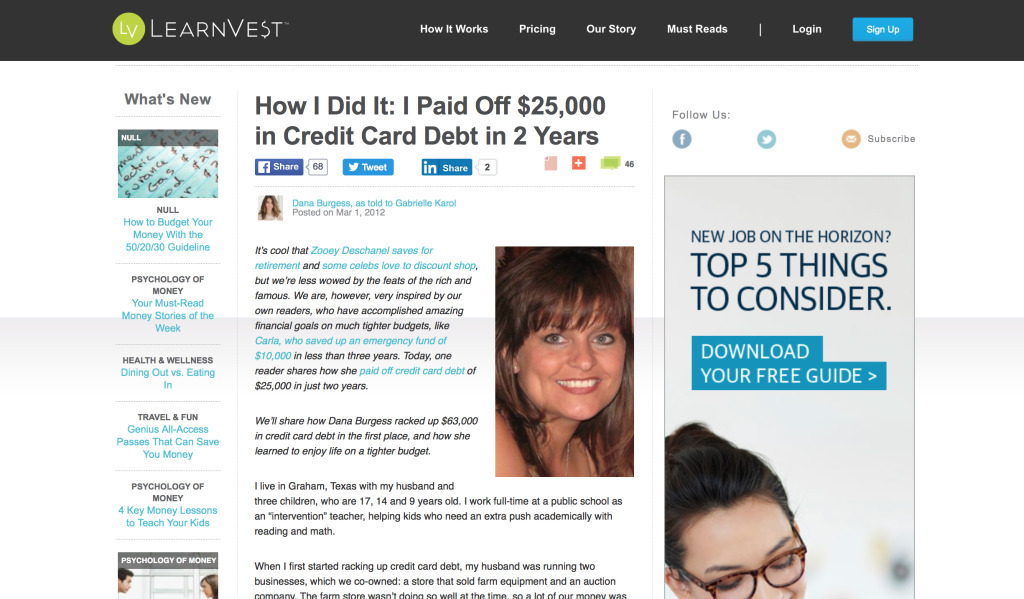 Dana discovered that she could still live and enjoy life on a tighter budget, and she explains exactly what she cut out to pay off her sizable credit card debt. Dana emphasizes the importance of continuing to treat yourself and says, “If something good happens, like I sell an expensive cake and can pay off an extra $200 on a credit card, I’ll treat myself a little. It’s always small, like ordering lunch for $6 or stopping by the Dairy Queen. Now that I’m not used to splurging all the time, even the littlest splurges seem much more special.” It goes to show you that the process really is all about #balance. 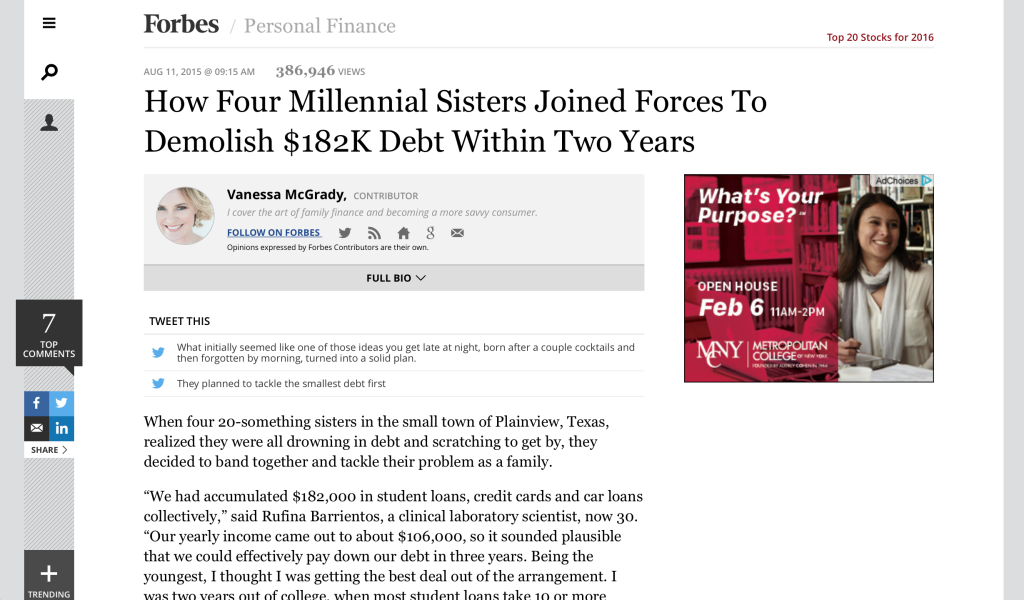 A truly inspiring story of four millennials sisters who banded together to pay off their whopping $182k debt. A must-read article for anyone looking for a little push to tackle their own debt. Honestly, their rules are fascinating. The article describes their process and wrote, “The rules were relatively simple: 1) They direct-deposited all their paychecks to joint account, which paid monthly bills, groceries, medical bills and car maintenance; all the leftover income would be thrown to the debt. 2) They planned to tackle the smallest debt first, ala Dave Ramsey. That meant credit card debt got paid off first, student loan debt last. 3) They each got $75 in spending money every two weeks. 4) They were religious about recording everything. ‘We took advantage of our sister Ana’s borderline OCD tendencies and she made spreadsheets for everything: debt, income, monthly bills and even groceries.’ Barrientos says.” Read the article in full to find out what happened!

TFD has written (and shared) some fantastic resources/write-ups about paying down debt and strategies for doing it more efficiently. Check them out!