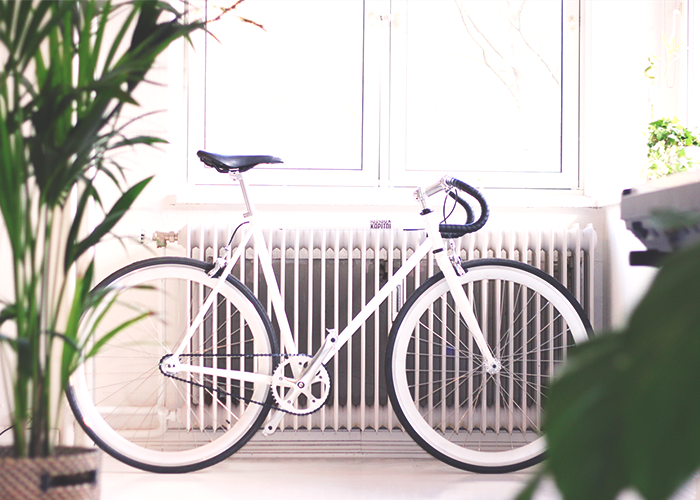 I’ll never forget the feeling of freedom I experienced the first time I rode my bike across town by myself. I was 10 years old and enrolled in tennis lessons that my mom disliked driving me to, living in a town without public transit. I took that first big scary ride over to the tennis club (it was only a 10-minute ride, but most of it on the Trans-Canada Highway) and suddenly, I felt a surge of independence — while my friends were already counting down the years until their driver’s licenses, I had my bike, and it could get me anywhere! I started riding it to my friends’ houses, to swimming lessons, and to school.

Then things happened — I moved to a larger city, got used to city buses and, eventually, learned to drive. I would drive everywhere, even though my city was full of spacious bike trails along beautiful Lake Nipissing. In high school, my bike was stolen, and I didn’t bother getting a new one until I was 21.

When I moved to Toronto, I kept my car for the first couple years. But after starting a job in our congested downtown (where parking cost a minimum of $8/day), I decided that it was time to hop back on my bike. It was rough at first — my ride home was along one of the city’s harshest hills — but almost right away I started seeing the benefits. Not only was I getting to work (and home) faster than I would have on transit, but I was also feeling amazing, seeing more of the city, and doing my own part for the environment.

Biking isn’t for everyone, but more people should feel empowered to do it. It’s not as scary as many make it out to be, and depending on your climate, you can do it far beyond the summer months. I happen to bike 12 months of the year, and will only opt for transit in the case of blizzards or torrential downpours.

I don’t use a lot of fancy bike accessories — I’ve never used a pannier, expensive rain gear, or those weird bike shorts with a padded butt. But there are a few things that will help make biking a lot easier (and safer) if you’re thinking of starting.

. Helmets aren’t required by law everywhere, but they’re just a smart thing to do. You can sustain a serious head injury even at low speeds — spend the money on a helmet (many are in the $20-30 range) and protect your head. Please.

2. Lights. You might not be interested in cycling in January, but when the clocks go back an hour and the sun starts to set at 5 PM, you’ll be happy you have lights. At the very least, a white light

on the front and a red light

on the back make for a safer ride. I’m safety-obsessed, so I’ve also added wheel lights

and an arm band light

. A waterproof jacket will only do so much. A longer rain poncho can protect your butt from splash-up, can usually fit over your bag and can be folded up to fit in most pockets. I bought mine for only $4 at a bookstore, and it’s been there for me through the craziest (and most unexpected) weather changes.

4. A security plan. Not everyone can take their bike into their office, so you should find a way to mitigate theft as much as possible. I lock the frame outside and take my front wheel in with me (people will still steal a bike without a seat, but few would bother trying to make off with a bike missing a wheel). If you can, ask your office for inside storage options, since bikes are a hot ticket item for petty thieves. I’d also invest in a tough-to-cut U-mount lock over a chain; spending more money upfront means you don’t have to spend ten times that to replace the bike down the road.

5. A change of clothes/a post-bike beautification routine. Riding to work every day means three things: Sweat, dirt and helmet hair. I wouldn’t recommend biking to work in clothes you plan to wear that day, or at the very least in the shirt you plan to wear. I always keep my work shirt in my bag and change at the office, and I have a pair of work flats at my desk, as well as generic, go-with-everything pants for emergencies. You should also consider a hair brush, dry shampoo and/or deodorant to spruce up after your ride.

6. A rewards app. If you can find an app in your city that rewards you for biking, get on it! I’ve been using Biko for under two months and have converted every kilometer I bike into points that I’ve used on coffee, takeout, bedding, and even a sweet pair of jeans. Hey, if you’re not going to do it for the environment, at least do it for your wallet.

. I’ve popped my tire four times on my route. They’re not particularly expensive (about $14 a fix), but when I realized that I could get a patch kit for less than $10 and that my small pump

fits easily into my backpack, I made the “investment.” Knowing how to patch a tire can get you out of some tough spots, and many bike shops or outdoor retailers like REI and MEC offer free workshops.

8. A thick skin. I won’t lie: being a cyclist is difficult at times. I’ve been doored three times (none resulting in serious injuries) and even though dooring is a chargeable offense in my city, I’ve been told repeatedly that I’m to blame for my own injuries, even by cops who are supposed to be helping me. Many drivers get frustrated with cyclists, even when we’re following the rules of the road, and some can be downright mean and scary. One driver even followed me through a series of side streets because he became irate when I shook my fist at him (he was illegally parked in a bike lane at rush hour). I’ve also been talked down to by bike mechanics because of my age and gender. None of these experiences ever make me want to give up cycling, but they are things to consider when you get to biking.