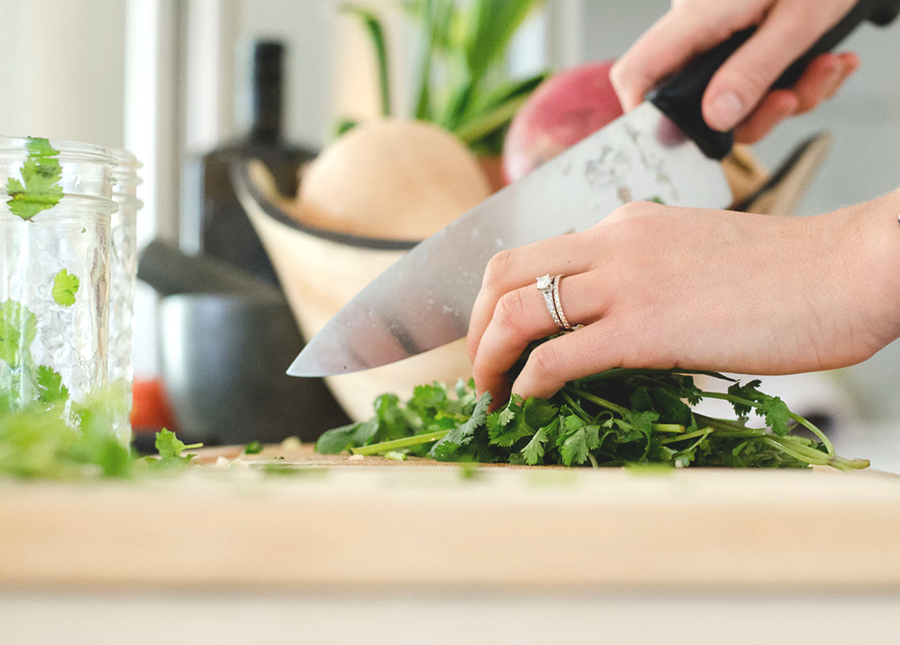 I know you probably feel guilty about your helplessness in the kitchen. Same. Or at least, I used to. You might worry (rightfully) that this attribute will only become less excusable/charming with each passing year. You may even know that if you could just bring yourself to pick up a flipping knife, it’d save you anywhere from $5,000 – $10,000 a year.

But I would guess also, because you’re reading this, that knowing the facts isn’t enough. For whatever reason, there’s a mile-high mental block keeping you from starting this habit. I feel you. For the better part of my 20s, while my partners at TFD were becoming little Ina Gartens in the making (see: Chelsea’s weekly Instagram recipes), I was living that bagel-to-bagel life. I somehow can’t even recall what I ate for dinner most days, though images of cold cuts, canned soup, and other similarly sad items float through my memory alongside other suppressed and vaguely embarrassing choices, like super-low-rise jeans and velour tracksuits.

While I did finally reach a turning point and now feed myself with some level of dignity, it took a lot of factors to break out of my culinary paralysis. So if that’s where you currently are, I think it’s useful to really think about where, specifically, your hang-ups lie. Do you just hate going to the store? Or feel like it’s not worth cooking for only yourself? For me, these were both partial factors at one point and have some tangible solutions, like temporarily paying for a meal kit delivery service, or inviting a friend for dinner. But another hang-up I had is that recipes are so unfair to the novice cook! The very format of listing the ingredients (ie. 1 TSP minced garlic) assumes a level of competence. Like, wait, hold up…how do you mince garlic? And how can I include “1 TBSP lemon zest” when I have no idea what it means to “zest” anything?

So out of empathy for my fellow late bloomers, I wanted to share some of the meals that served as the best gateway drugs to my kitchen life. I say meals, not recipes, because they are more general structures than specific instructions. A good beginner meal as I define it has three qualities:

All of the below fit these requirements, and are importantly flexible in the sense that you don’t really need exact quantities of anything and can substitute most of the ingredients. So without further rambling…here are my 3 Best Gateway Meals:

I went years without recognizing the entire category of roasting. While I must’ve noticed my oven taking up a third of my kitchen, it went unregistered to my eye — the secretly attractive dude in high school you fail to notice until one day he’s suddenly married and successful. But roasting is awesome, especially for the lazy or inattentive among us. While you’re keeping up with the Kardashians, or as I prefer, wandering about your house half-heartedly moving around clutter in a show of being productive, your chicken thighs will be metamorphosing into beautiful golden wonders. Also! You only create one pan to clean, and with enough foil or parchment paper, you’ll barely even have to clean that. I’m guessing half the reason you fear cooking is the dishes it creates, which is why this is such a good gateway. Some would say a cast iron is better than a sheet pan, and they’re probably right, but I own one and hate how heavy it is (see: noodle arms), and it requires a little know-how to season and clean. So for now, stick to the sheet. You can always branch out later.

I started with chicken thighs, sprouts, and taters, and still make it at least a few times a month. It’s a perfectly balanced meal, and the veggies are both hearty and easy to cut. Plus, thighs have more natural flavor and are pretty hard to overcook, whereas breasts can more easily turn out dry. You can follow this super simple recipe, but the gist is basically: Heat oven to 425°, cut veggies into bite-size pieces, put food on pan, cover in oil and whatever seasoning you have (lemon, garlic, and fresh herbs are great, but any Italian seasoning will do, or just salt), set timer for 20 min, watch TV/putter around your house until it goes off. The veggies will be ready before the chicken, and the chicken will be ready when it looks golden brown and registers 165°. Only note is to leave a little more time than you think. Pretty much every recipe I’ve found claims a ~30 min bake time for chicken, but it always takes me longer than that. It kind of depends on the size of the meat and your oven, so just start preheating well before you’re hangry.

Once you’ve mastered the above, there’s almost no meat or veggie you can’t just throw on a sheet pan and call it a day. A short list of other things that are delectable when roasted: fish, squash, whole garlic cloves, bacon, asparagus, broccoli, even, some would argue, grapes (…?!). You can roast things straight from the freezer. You can mix all manner of food on one pan. You can make way more than you need and have it to munch on for days. I guess what I’m trying to say is, notice your oven. It’s hot. And it’s been waiting for you.

After roasting, the single best revelation I’ve had with food is that the vast majority of soups have the same base, and that base is both foolproof and deeply soothing. Basically, just chop up some onion into small chunks and mince garlic (AKA grind or chop into very small bits) and throw in a pot with some oil on medium heat. At this point, some might add chopped carrots and celery. A few minutes later, pour in a box or half-box of your stock/broth of choice (chicken is my favorite but veggie works too). Don’t even worry about exact quantities because they’re kind of subjective — it just depends how much you like onion, garlic, etc. After that is the fun part, wherein you add whatever you want or happen to have on hand: pretty much anything that comes in a can will do, ie. beans, corn, chickpeas, or diced tomatoes, as well as fresh veggies and fresh or dry herbs. Be generous with the salt and pepper, and add some spices if you have them. I have a cajun seasoning mix I bought for this “10 Spice Vegan Soup” and it’s so good, I’ve used it at least 50 times. After bringing it all to boil, I then turn it down and let it simmer for about 30 minutes, taste-testing little spoonfuls to see if it has enough salt. Even then, you can still add more goodies, like cooked rice, cheese, and any leftover meat you have around (like your roasted sheet pan chicken!).

Of course, there are many precise recipes you can and should attempt if you feel up to it, like TFD’s easy Cozy & Delicious Lentil Soup or the more advanced Cheesy Broccoli Soup with Kale & Potatoes, but the liberating *principle* of soups is that once you have the general idea down, it’s more or less a blank canvas on which you can add whatever leftover ingredients you have to use up your groceries and cater to your personal tastes. While there are infinite ways to be right, it’s pretty hard to get it that wrong.

Mmm…I suppose I lied on this one in implying that it’s impossible to mess up, because before I was woke to the basics, I did burn a few stir fries in my day. It’s doubtful your common sense is as lacking as mine was at 22, but just in case, a short list of cautions:

The most embarrassing part of this story is that I’m half-Asian, though in truth, the origin is irrelevant because I never cooked anything growing up so was equally clueless about all cuisines. But enough about me. Stir fry (at least how I make it now) is pretty freaking easy and not all that different than soup in that it starts with the trifecta of onion-garlic-oil and doesn’t require precise measurements of anything. You can use three vegetables or ten, and add chicken or tofu or shrimp or any meat you want (probably). Here’s a nice recipe for Thai Chicken Stir Fry from TFD-approved food blog The Woks of Life. I can tell you right now though that if you don’t have or don’t feel like buying all of the sauces, just regular soy sauce and sugar will do. Thai basil and mint are both lovely and you should try them, but again, if not having it is going to scare you off or preclude you from making this, just use one. Or neither. It’ll be fine! This is pretty simple stuff. You are gonna want some fluffy rice, though, and if you don’t already have a rice maker, slow cooker, or instant pot, I would highly recommend something like this one, which is $33, and which I’ve used approximately 500 times. (Yes, one could also just make rice over the stove in a regular pot. But you’ve self-identified as averse to your stove so just embrace who you are and don’t make life harder than it needs to be.)

Now that you’re all good and motivated, here are some extra resources for you:

What are some cooking lessons you’ve learned the hard way?