How My Biggest Personal Insecurity Is Actually Helping My Career 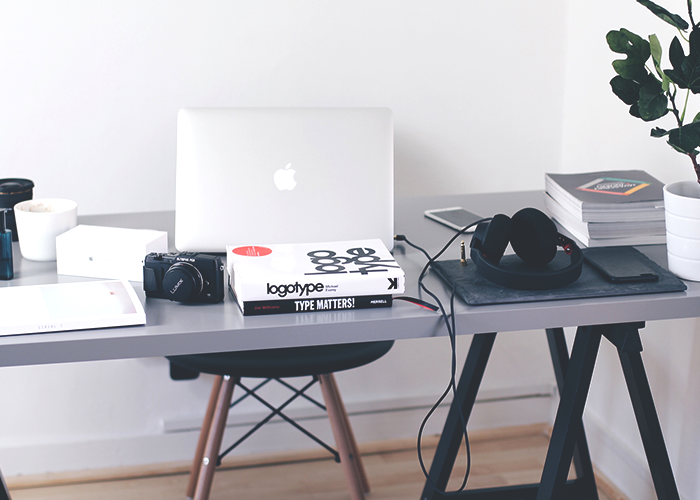 I’ve written about it a few times now, but for those who don’t know, I recently moved in with my boyfriend (Peter) of a year and a half. Moving was the impetus for me to get my shit together, clutter and organization-wise, and so far it’s been really great. The new apartment has been a reset button for me in a lot of ways. I have yet to return to my innate throw-clothes-on-the-floor-and-forget-about-them-immediately self (granted, it’s been three weeks — there’s still time). I love not splitting my time between two homes, as it gives me a lot more time to spend on hobbies, like slowly baking my way through the summer section of my favorite pie recipe book

I’ve also loved getting to decorate someplace entirely new, and despite the small-ish kitchen, I love our apartment a lot. It gets great light — something I’ve never had the privilege of experiencing in a New York living situation — and has ample closet space, a laundry room in the building, and enough room for us to be comfortable. And, of course, it’s great to get to organically spend so much time with my favorite person. We’re very lucky.

I love the apartment, except for one thing: the location. We live in Hell’s Kitchen, aka Midtown West. If you have only a minimal understanding of the NYC landscape, I’ll just say that it is a little too close for comfort to the horror factory that is Times Square. My previous neighborhood in Upper Manhattan was a lot more residential, and a lot quieter. But because of Peter’s lease stipulations, he couldn’t move out of his building before his lease was up without paying a substantial amount of money, but we could upgrade from his previous studio to a one bedroom. When the lease is up, we will for sure be moving to a different part of town.

Sometimes, I find myself complaining about the area we live in — it’s too crowded, too noisy, too far from the train. The grocery stores are too expensive, and we’re paying too much in rent. But I have to stop myself right away, because complaining about something that is so obviously a privilege makes me feel like kind of an asshole. The truth is, I would absolutely never be able to afford to live in this area without living with a partner with a lot more spending power, unless I somehow landed amongst too many roommates in one of New York’s notorious semi-illegal 4-bedroom conversions.

It’s something that I’ve previously called “relationship privilege,” and I still hold that it is absolutely a thing. It’s not that my life is less expensive by living with Peter (in reality, it’s a little more expensive now that I’m no longer splitting utilities with two roommates), but I have so many more options within the range of “affordable” than I would without him. And that’s not something that is reserved for relationships where one partner is a relatively high earner. As a single person, I had to live with roommates (who I thankfully loved) in order to make this city affordable for me. But say Peter was only making the same amount of money as me; we would still be able to afford a one bedroom, albeit in a different part of town. That being said, the amount Peter and I each pay towards our rent is proportionate to our incomes. And because he does make a significant amount more than I do, the options we have access to are pretty wide.

Sometimes I feel extremely insecure about living where I do now, because I did absolutely nothing to earn it. I’m not even sure this insecurity is impostor syndrome, because falling in love is not an accomplishment — it’s luck and timing and the personal desire to be in a relationship in the first place. Even though I do want to be spending a little less money, to move to a more affordable part of town when the lease term is up next year and lower our living expenses, the fact that we’re able to downsize in the first place is an enormous privilege. Being insecure about the fact that I earn less, or worse, feeling guilty that I can’t contribute more to rent, is not productive for anyone.

This is, of course, not an uncommon situation. A lot of straight women like me earn less than their partners, especially when they’ve chosen to be writers and their partners have chosen a heavily-sought-after STEM career. And I see a lot of them cope with it by focusing on what they bring to the table — usually, domestic things. They may earn less, but they cook and clean and bring a lot to the household. They often manage the money, even if they’re not the one making most of it.

I mean no offense to the people in those positions, but I don’t think I should be responsible for all of our domestic tasks simply because I am the lower earner. For one thing, it would be chaos; the bed would never be made, the floor never vacuumed. Bless Peter’s chore-happy little heart, because I am much lazier with that stuff than he is. I have no idea what I’d do if he didn’t also like cooking, but I for one wouldn’t be responsible for dinner every single night. And I understand where that compulsion to contribute in some (perhaps non-monetary) way comes from, because yes, it can be disheartening to be in a position where you’re earning less money and putting in the same hours, if not more. But I think the idea that you are either the breadwinner or you take care of running the household is outdated, and something I am wholly uninterested in.

What I do instead is use those feelings of insecurity to fuel my desire to earn more — and not at the expense of my personal life. Watching people close to me — like Peter — go to work and come home at the same time every day, with the ability to completely prevent work from invading their personal time (with some rare exceptions), makes me, frankly, a little jealous, and often insecure that I’m not able to make a similar amount of money in the same hours. A huge perk of freelancing is that I get to make my own schedule, but that also means I sometimes end up working more hours than I’d like to. It’s hard to “turn it off” and not continue thinking about work things well past the time you intended to fall asleep when your time is directly linked to how much you can earn. My weekly TFD time is, thankfully, scheduled and entirely manageable, but how I allot the time I spend doing everything else — which currently consists of copywriting and editing projects for a few clients — is up to me.

Being insecure about earning less than my partner, and therefore not contributing an equal amount to rent, could lead me down a path of overworking myself so much that I have no time left over to enjoy the hypothetically-greater amount of money I’d be making. Instead, I challenge myself to try earning more while working the same number of hours as someone with a regular full-time job. I don’t go to extremes like timing myself, or “clocking” in and out at the exact same time every day. And yes, writing (and editing) takes time, and sometimes I get extra momentum and end up working on something well into the evening. However, I do give myself permission to assign more value to my time. I ask for more for a project upfront. I’ll say no to projects I know won’t be worth my time in the end. I’ll sometimes insist on a longer turnaround, when in the past I would have said “yes” to anyone, even a new client asking for a 2,000 word blog post within 24 hours.

I haven’t deluded myself into thinking that I can be making as much as Peter by the end of the year, or even anytime in the foreseeable future. But the more I can earn and set aside in savings, the more I feel like I’m contributing to our life together. Even though we make decisions (like our living situation) as equal partners, it’s motivating to know I’m on a path towards contributing a more equal monetary amount — without sacrificing all of my waking life to work.